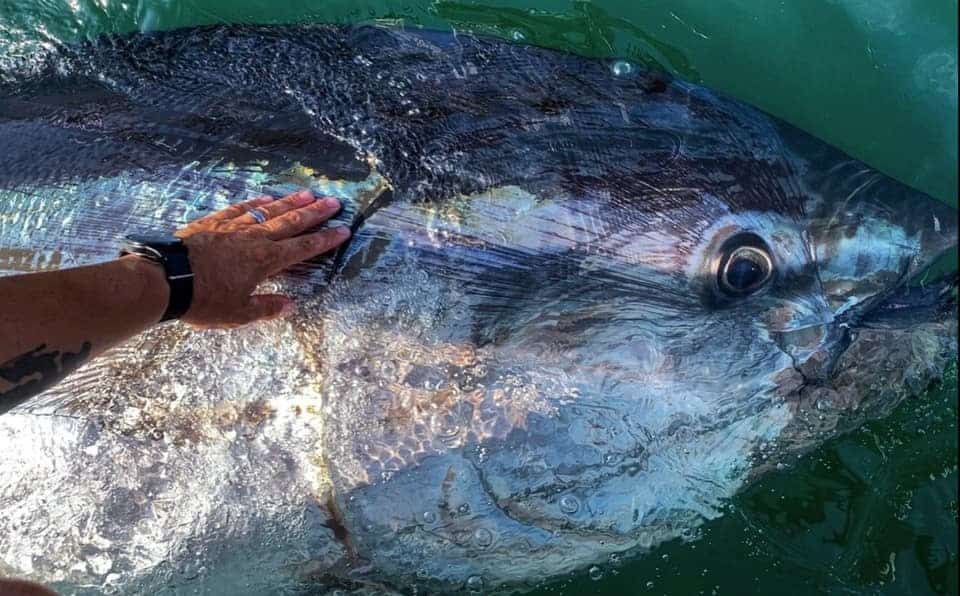 The bluefin tuna is a highly popular food and game fish sought by both commercial and recreational fishermen for their exquisite taste, high market value, and extreme fighting skills.

Over the last 50 years or so, their numbers have unfortunately gone down substantially. And so, I wanted to know the answer to the question: are bluefin tuna endangered?

Continue reading this article if you want to know all the facts and science surrounding the mighty bluefin tuna’s status around the world.

PRO TIP: If you’re interested in bluefin tuna and their ecology, take a look at this book on the latest scientific research on giant bluefins on Amazon here.

Is The Bluefin Tuna an Endangered Species?

In general, all three bluefin tuna species (Atlantic, Pacific, and Southern) can be classified as endangered, even though they are not universally listed or recognized as such.

As is the case far too often, international leaders could not agree on a consensus regarding the status of the bluefin tuna. Hence, various attempts to ban global commercial fishing for bluefin tuna have failed.

A rather unfortunate circumstance that the species had to pay for dearly.

Over the last 50 years, severe commercial overfishing and ever-rising market value for this fish have led to drastically depleted populations all over the globe.

However, the IUCN (the International Union for Conservation of Nature) has put the bluefin tuna on their red list of threatened species, which has helped to kick-start conservation and stock improvement plans.

The listing has also helped to raise global awareness of the bluefin’s status.

It is only thanks to these recent fisheries management efforts that some stocks are beginning to recover, if only slightly.

In order to get a more complete picture, let’s look at all the three different bluefin species and their statues individually.

Being the strongest and largest member of the bluefin tuna family, the Atlantic bluefin has been over-fished for decades.

Both the western Atlantic stocks off the US coast and the North-East Atlantic European and Mediterranean stocks have been severely depleted by the international commercial fishing industry.

Since 2005, things are moving in a more positive direction, and the Atlantic stocks are steadily increasing year after year. The reported numbers over the last couple of years are especially promising, indicating a much brighter future for this species.

Due to the previous harsh decline of the species, the IUCN has hitherto listed the following conservation statuses for the Atlantic bluefin tuna:

The somewhat smaller Pacific bluefin tuna has faced a similar fate since the 1960s.

Large-scale commercial fishing, primarily of Asian origin, has contributed to the species’ gradual decline in the Pacific Ocean.

According to recent estimates, the Pacific bluefin tuna is currently at a mere 2.6% of its historic levels, and fishing for this species remains to be unsustainable.

Despite this fact, the global community has failed to see the importance of preserving the species. As late as 2011, the status for the Pacific bluefin was listed under the category “Least Concern“, regarding conservation needs for fish species.

Once again, it is only thanks to organizations such as the IUCN, Greenpeace, and Blue Ocean Institute that the species eventually got another conservation status:

The Southern bluefin is the somewhat lesser-known of the three bluefin tuna species. It can primarily be found off the coast of Australia and in the Indian Ocean.

Just as its relatives, the Southern bluefin has been vastly over-fished and depleted over the last few decades. In fact, this tuna species can be regarded as the most depleted of all.

However, recent studies suggest that the Southern bluefin stocks are slowly but surely recovering, which is a distant light at the end of the tunnel, but a light nonetheless!

This tuna species has come very close to extinction, but recent fisheries management efforts and the ban of illegal fishing activities close to the Southern bluefin’s spawning grounds seem to bear fruit.

Regardless of that, a lot of work remains and the IUCN, as well as the New South Wales Fisheries Management Act of 1994, have hitherto held on to the following conservation classification:

When Did Bluefin Tuna Become Endangered?

All three bluefin tuna species became endangered between the 1970s and 1990s after the world had discovered and grown its appetite for the bluefin’s exquisite meat.

Prior to that, bluefin tuna were actually regarded as being a pretty worthless catch. People along the Atlantic and Pacific coast caught them occasionally, but most catches ended up in landfills or as cat food!

Then, something happened: Japanese sushi became a trend that quickly turned into an ultra-exquisite food for the super-rich.

As that trend developed, it spread across the world with the help of globalization and an ever-developing and fastening international transport system.

In parallel, sushi became even more popular and had by the 1990s been made available to the world’s middle-classes.

This resulted in a gigantic demand for bluefin tuna fish, which could only be saturated by vastly over-fishing the world’s tuna stocks.

An unbelievable 60-80% of the global demand for bluefin tuna has its origin in Japan, which constitutes the world’s largest market for tuna sushi.

Today, the bluefin tuna is considered more valuable than ever and has an outrageously high market value, which, of course, does not go hand in hand with future sustainability efforts all that smoothly.

How Many Bluefin Tuna Are Left in The World?

It is extremely difficult to estimate the exact number of remaining bluefin tuna in the world.

However, based on annual catch quotas, research of reproduction patterns, and overall biomass measurements, researchers and fisheries managers are able to provide reliable numbers.

When it comes to both the western and north-eastern Atlantic bluefin stocks, the remaining population consists of 18% of the biomass of the untouched stocks that were observed in 1950, and 45% of the biomass in 1974.

Since 2005, a slight but steady annual increase of biomass has been reported.

As mentioned above, the remaining Pacific bluefin tuna stock consists of a mere 2.6% of its original size from 1950.

Here, researchers have actually managed to produce solid numbers that accurately represent the number of remaining bluefin tuna in the Pacific ocean.

In other words, the Pacific bluefin is tuna species closest to extinction and should hence be rated accordingly.

The remaining number of Southern bluefin tuna is somewhat more difficult to estimate, as there are areas of the Indian ocean that researchers do not have access to.

Regardless of that, recent reports from 2017 suggest that there is an estimated 13% that remains of the original Southern bluefin stock biomass.

While this number is rather low, it nonetheless represents a small improvement when compared to previous stock assessments which resulted in a remaining 5% of the original biomass in 2011 and 9% in 2014.

Are Bluefin Tuna Being Protected?

While this article has shown just how endangered and depleted the global bluefin tuna population really is, there is still hope for a better future, as more and more stocks are being managed and protected.

The global community surrounding the UN is slowly waking up and starting to implement changes that have the power to improve the bluefin tuna’s status substantially.

There are already plenty of successful examples that show that change can and does happen if there is enough awareness and will to do so!

In particular, small-scale, rod&reel-based fisheries are a very sustainable and population-friendly alternative to large-scale vessel and net-based fishing.

This type of traditional fishing method definitely deserves a lot of respect and attention, as it can support the restoration of entire stocks, while still being able to deliver fish to the food markets of the world.

Here are a few more shining examples of bluefin tuna stock protection and fisheries management efforts from all around the world:

The NOAA (National Oceanic and Atmospheric Association) oversees and manages all US-based bluefin tuna fisheries and sets regulations that are based on the ICCAT’s (International Commission for the Conservation of Atlantic Tunas) scientific conservation and fisheries management recommendations.

Among these are the following:

These long-term sustainability efforts are slowly resulting in stock recovery and improvements, which is a very good sign for the future of the western Atlantic bluefin tuna.

In the EU, the up-to-date most successful bluefin tuna stock recovery has taken place over the last decade.

Only 10 years ago, fishermen in the European Union were talking about the extinction of the continent’s bluefin tuna population.

Now, things have really turned around and the EU is now managing a tuna population that is far more sustainable and even begins to thrive.

This is thanks to a variety of factors:

Related Reading: If you want to find out more about the European bluefin tuna and how both anglers and researchers are working together to improve the population, you should definitely also read this article: Are There Bluefin Tuna in The North Sea?

Even the world’s, by far, largest consumer of bluefin tuna is starting to take measures to restore global tuna populations.

The Japanese government has realized the severity of the Pacific bluefin tuna’s situation and is beginning to implement new measures and laws in order to protect and revitalize the species in the region:

In conclusion, the status of the bluefin tuna has been critical for a long time and is now only starting to improve.

With the right measures and a commitment to long-term sustainability efforts, the species can be saved and brought back to its former glory.

But in order for that to happen, the whole world must work together and continue to do so for the foreseeable future. Then, and only then, the bluefin tuna might one day no longer be listed as an endangered species.

How to Catch Pike in Cold Water (Best Baits and Methods)
← Previous
How to Make Dead Bait Pop-Up Sticks (a DIY Guide)
Next →
Click here to cancel reply.