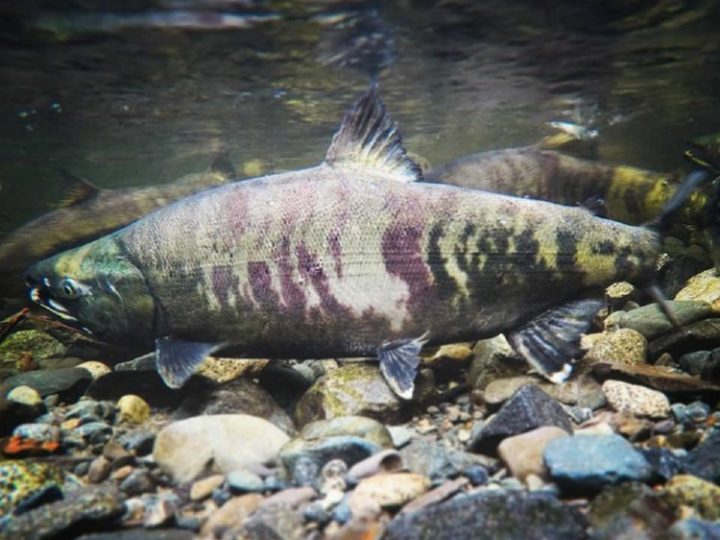 Most people associate salmon with freshwater and rivers, as it is here that they are most commonly seen. But are salmon freshwater fish? Or do they also dwell in saltwater? I wanted to shed some light on this question and decided to write an article on the topic.

Both Pacific and Atlantic salmon are anadromous fish, which means that they are born in freshwater, spend most of their lives in saltwater, and then return to freshwater for spawning. As such, salmon are one of few species that are both freshwater and saltwater fish.

Keep reading this article if you want to learn more about the fascinating life cycle of the salmon, including how they look and taste in fresh and saltwater and what landlocked salmon are.

PRO TIP: Did you know that the North American continent is home to a total of 70 species and subspecies of salmon and trout? Find out more about them by checking out this detailed illustrated guide on Amazon.

Do Salmon Live in Freshwater?

As all five Pacific salmon types and the Atlantic salmon spawn in rivers, all salmon are born in freshwater. However, they do not remain in their freshwater habitats for very long. Instead, they will leave their natal rivers to spend the majority of their lives in the sea.

Once they have fully matured, they will return to the same river they were born in to spawn and eventually die.

This fascinating and fairly exceptional life cycle makes the salmon an anadromous fish species, meaning that they ascend rivers from the sea for breeding.

During the “fry stage” of their life (meaning when they are still juveniles), salmon will spend anywhere from a few days to a few years in their natal rivers before heading out to sea.

One factor determining how long the young salmon will remain in freshwater is how far upriver they have hatched.

Some populations of salmon may spawn a mere few hundred yards upriver, while others can cover vast distances to reach their spawning grounds.

One extreme example is the iconic Idaho sockeye salmon, which swims more than 900 miles and climbs more than 6,500 feet in elevation to get to their breeding grounds in Redfish Lake.

Another factor that plays an essential role here is the type of salmon. Interestingly, all salmon species tend to spend different lengths of time in freshwater after they’ve been born:

The amount of time that the salmon then spends in saltwater also varies significantly from species to species:

PRO TIP: Check out the visual summary of this article in the related web story about the salmon’s freshwater and saltwater journey!

When the fish have matured, they will start their journey back to their natal rivers to spawn. Often, the location of those rivers can be thousands of miles from the salmon’s current feeding grounds in the ocean.

They are, in other words, highly determined long-distance swimmers.

After the spawning has commenced, all Pacific and most Atlantic salmon will then die. And thus, the fascinating life cycle of the salmon is completed.

There is one exception to this rule, though, and that would be landlocked salmon. This particular salmon cannot reach the ocean. Instead, it spends its entire life in large freshwater lakes and typically spawns in the tributaries connected to the lake the salmon lives in.

The Great Lakes are an example of a freshwater environment that holds a large population of landlocked salmon.

RELATED ARTICLE: What Are Landlocked Salmon? (A Complete Guide)

Do Salmon Look the Same in Freshwater and Saltwater?

When dwelling in saltwater, all salmon species look relatively alike, as they are all spotted, have a bright silvery to the blueish body coloration, and a dark back. However, once they enter freshwater, their appearance will drastically and rapidly change.

Especially male salmon undergo an often complete bodily transformation, as they can develop both humped backs and hook-like jaws.

Most salmon, except for chinooks and Atlantics, will also lose their black spots, and all salmon types will change their body color more or less entirely once they have entered freshwater territory.

On the other hand, sockeye salmon can often develop a bright and beautiful red body coloration when swimming upriver to get to their natal spawning grounds:

In the case of the sockeye, this is a way for male fish to try to attract a female mating partner.

Furthermore, as the Pacific salmon types use up all of their bodily energy and start to deteriorate during their upriver migration, they will look considerably thinner and sicker than during their time in the ocean.

During their river journey, they will also lose a lot of flesh and gum tissue, which will make their teeth appear much more prominent, as their teeth are more embedded and needle-like when dwelling in the ocean.

In conclusion, salmon that are roaming the oceans tend to look healthy, strong, and well-fed, while their freshwater versions will appear weak, sick, and undernourished during their way upriver.

RELATED ARTICLE: Check out this interesting article if you want to know more about the salmon’s spawning behavior and why most of them die after spawning.

If you were to ask true salmon connoisseurs, most of them would describe freshwater salmon to taste like steelhead trout.

However, the difference in taste is relatively subtle and almost indistinguishable for someone who does not eat salmon regularly.

Additionally, if either fresh or saltwater salmon were to be brined and smoked, the taste would be basically the same.

RELATED ARTICLE: Find out more about the differences between Atlantic and Pacific salmon by reading this article!

But if there is a difference in flavor present and you’d ask me which I’d prefer, I would have to go for the saltwater salmon, as I like the somewhat saltier and more pronounced flavor.

But regardless of that, whether coming from salt or freshwater, the salmon’s exquisite meat is an excellent source of protein that can be seasoned and prepared in many different ways.

And so, no matter which of the two you end up eating, it’ll most likely always result in a fantastic meal! Bon appétit!

How to Heat Your Ice Fishing Shelter (A Helpful Guide)
← Previous
What Do Perch Eat? (Favorite Prey and Baits)
Next →