Are There Zander in the US? 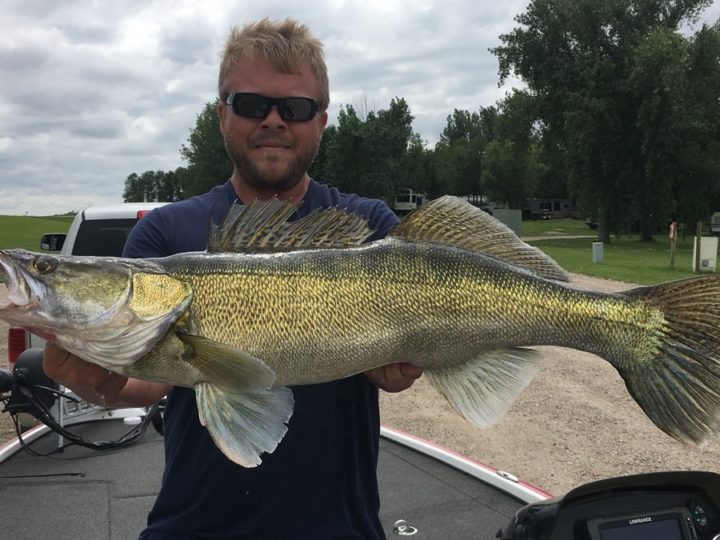 Zander can be found all over Europe, and as they closely resemble walleye, many North American anglers are wondering if there are any zander in the US. I did some research to find out.

While the zander is almost exclusively found in Europe, the UK, and western Eurasia, two lakes in North America hold an actual population of them as well. These waters are Spiritwood Lake and Alkali Lake in North Dakota.

Keep on reading this article if you want to know how to fish for zander, how big they can grow in the US, and what they taste like.

Where Can You Fish for Zander in the US?

The only state in which you can find zander in the United States is North Dakota. Here, both Spiritwood Lake, located near Jamestown, and the connected Alkali Lake south of it hold populations of zander.

The North Dakota Game and Fish Department officially stocked zander in Spiritwood Lake back in 1989. Since then, the European predator that looks so much like a walleye has inhabited this water.

The goal of the department’s one-time effort of placing roughly 180.000 fry and 1.050 fingerlings, which were imported from Holland, was reportedly to “stock the lake for sport fishing purposes,” even though it was believed from the beginning that the fish would not survive in their new habitat for long.

And while the zander’s numbers remained low in Spiritwood Lake, it started to thrive and multiply in the nearby Alkali Lake, a water that directly connects to Spiritwood.

Should you ever want to fish for zander in the US, it is here, on Alkali Lake, that you should try your luck!

Anglers fishing this lake often catch a decent fish or two, both in open water and through the ice.

The reported average size of the zander in Alkali Lake is 16 inches and 2lb.

How to Fish for Zander?

Zander can be caught on various lures and baits and respond well to all the fishing methods that are common when targeting walleye.

Both trolling with smaller crankbaits or bottom bouncers with spinner rigs, jigs, and softbaits are solid lure choices for zander fishing.

Furthermore, smaller live baits, such as minnows or shiners, on a slip bobber rig that’s either fished static or slow-trolled behind your boat can be very effective. Especially on days when lures don’t seem to cut it!

Use a canoe or kayak on Alkali Lake, as there are no boat launching ramps here. The best starting point is a gravel road on the north end of the lake. This is pretty much the water’s only access point, as a wildlife sanctuary surrounds the rest of the lake.

Spiritwood Lake has two improved boat ramps that are both open to the public. One is on the north shore of the lake, near Spiritwood Ave. The other is located on the south shore at the Spiritwood Resport.

Zander can also be caught through the ice. Brightly colored jigs or noisy rattle baits, such as the Rattlin Rapala, can certainly land you a few ice zanders.

PRO TIP: A minnow-tipped fireball jig is my personal favorite for zander, both in open water and through the ice!

Please make sure to practice selective harvesting so that the lakes’ zander population will still be there in the future!

Keep fish under 20 inches and release everything above that, especially if the fish you have caught are females. The zander and dedicated anglers of Spiritwood and Alkali Lake will thank you for that!

What Is the Biggest Zander Ever Caught in the US?

The current North Dakota and US record zander is an impressive fish of 15lb 15oz and 35 -5/8 inches that angler Sam Wenner caught on Spiritwood Lake in 2019. That is the fish shown in the article’s featured image, by the way!

Sam, whom I have interviewed for this article, had fished Spiritwood for many days before finally hooking up to something massive.

To be more exact, he had been out on the lake 250 times over the last decade before finally catching his trophy zander. This gives you an idea of how tough it can be to catch zander in this lake!

His catch also obliterated the old state record that had a weight of 11lb 3 oz and a length of 32 inches.

Here’s what he said when I asked him whether he believes that there are even bigger zander in the lakes:

“There is always a bigger fish! There may not be a trophy in alkali but there is many many more to catch. And in a decade the new record will probably come from Alkali.”

Even though zander and walleye are relatives, as they share both the same order, family, and genus, zander(Sander lucioperca) and walleye (Sander vitreus) are two separate species of fish.

That said, they do look a lot alike, and I have often wondered if they aren’t one species that simply got separated at one point in time.

It’s not a scientifically proven fact, but research has suggested that they used to be one species that got separated about 12 million years ago.

In other words, it’s safe to assume that they are two very different fish!

RELATED ARTICLE: Find out more about the differences between zander and walleye, and how you can tell them apart, by checking out this article!

Can Zander and Walleye Coexist?

Again, this can only be based on the two habitats these two fish share. And according to the local observations by conservationists and anglers, zander and walleye do get along quite well and manage to coexist in both Spiritwood and Alkali Lake.

Do Zander and Walleye Crossbreed?

Despite their genetic similarities and close relation, zander and walleye do not crossbreed or manage to create offspring.

Walleye are well known to crossbreed with sauger, creating the popular saugeye in many waters in North America.

On the contrary, I have not read or heard about the crossbreeding or hybridizing of zander with other fish species in Europe.

Zander and walleye taste the same, and both are excellent food fish that can be prepared in many different ways.

Sam told me that “a prominent restaurant In Minneapolis once served zander as walleye. No one noticed the difference until it came out, and they got in trouble.”

So, taste-wise, they can be considered the same fish!

Is Zander a Cross Between Pike and Perch?

Zander and perch belong to the same family of fish (Percidae), making them distant relatives. However, neither zander nor perch is related to pike, which means that zander are not a cross between pike and perch.

Instead, it is a species of its own that has evolved directly and solely from the Percidae family.

The false presumption that zander are a hybrid between pike and perch is based partly on one of its nicknames since many people in North America refer to them as pike-perch.

Additionally, anglers tend to connect the zander’s size, which is similar to that of pike, and its appearance, which somewhat reminds of perch, and hence think of it as a pike-perch.

Do Zander Have Teeth?

Zander are predatory fish with plenty of teeth and two long, fang-like upper and lower frontal canines with which they grab and tear apart their prey. It is those frontal pairs of teeth that make the zander look like a vampire.

However, these teeth are not super sharp but rather pointy, which allows the angler to fish with relatively thin fluorocarbon, instead of wire, without fearing bite-offs.

What Are Landlocked Salmon?
← Previous
Crappie Fishing in Muddy Water (Best Lures, Baits, and Colors)
Next →