Atlantic vs. Pacific Salmon (How Are They Different?) 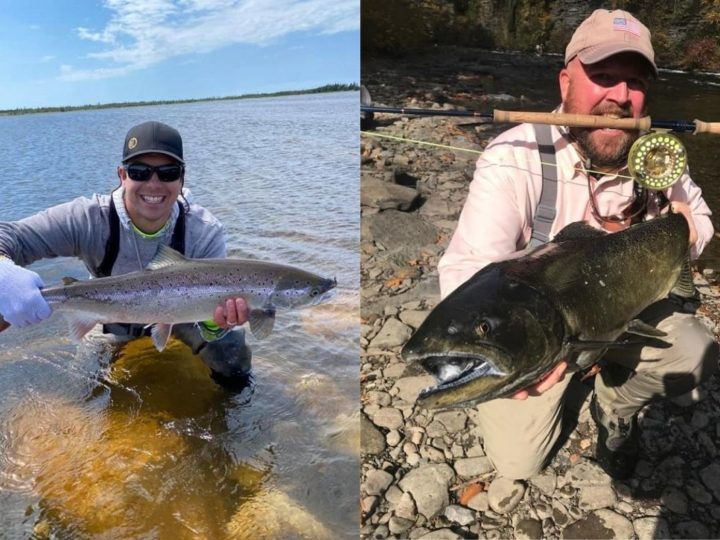 The different salmon species are an extremely interesting topic that fascinates people from around the world. Most of them are aware of the fact that there are both Pacific and Atlantic salmon out there, but not many people know what the differences between those two major salmonids are. That’s why I decided to write this article.

If you want to get more facts and information on the much-discussed topic of Atlantic vs. Pacific salmon, all you have to do is keep reading.

PRO TIP: If you want to read up on all of the trout and salmon species and subspecies of the North American continent, check out this in-depth guide on Amazon. It’s really interesting and contains a ton of facts.

Are Atlantic Salmon the Same as Pacific Salmon?

It is not merely the different names that set Atlantics and Pacifics apart from each other. While both the Atlantic salmon and all the five major Pacific salmon types are distantly related and share the same family of fish (Salmonidae), they have a different amount of chromosomes and completely different genera.

Atlantics belong to the genus Salmo salar, while the Pacific salmon genus is called Oncorhynchus.

They are hence two different salmonid species that, as their names so aptly suggest, originate from and dwell in two different oceans.

It is that natural difference of habitat that has made them evolve into the different salmon types of today.

And that doesn’t really come as a surprise at all, given that a research paper from 2012 has suggested that there are even chromosomal differences between European and North American Atlantic salmon.

That also means that there are Atlantic salmon on the European side of the Atlantic. Pacific salmon, on the other hand, can be found on the Asian side of the Pacific ocean.

What Are the Different Salmon Types?

While Atlantic salmon only include one species (Salmo salar), Pacific salmon include a total of five species:

RELATED ARTICLE: If you want to read up on all of the different types of salmon, you should definitely check out this in-depth guide on salmon species that I wrote a while back!

Do Pacific and Atlantic Salmon Look the Same?

As long as they dwell in saltwater, or in the depths of the Great Lakes, Atlantic and Pacific salmon look quite alike, as they are all of bright, silvery color. Once they enter freshwater, however, all salmon types undergo significant physiological changes, making them look very different from each other.

While keeping their brightly silver-colored bodies at the very beginning of their freshwater journey toward their natal spawning grounds upstream, they soon start to become darker and darker, switching to a brown, red, green, or sometimes even blackish color.

It is during this stage of their lives that it is the easiest to visually tell the different salmon species apart from each other.

The body coloration is entirely dependent on the salmon type, as well as on the turbidity, depth, and light intensity underwater; the darker and deeper the river, the darker the salmon will turn.

Here are a few examples of how Pacific and Atlantic salmon can look when dwelling in freshwater:

PRO TIP: You can check out the visual summary of this article in the related Atlantic vs. Pacific salmon web story here!

The Pacific king (chinook) salmon is bigger than all the other Pacific salmon types and the Atlantic salmon. But it’s a pretty close call, as the Atlantic is not far behind!

And to be completely honest with you, the vast coastal regions of North America must hold even bigger chinooks than that. I am fairly certain of it!

No matter what type is the bigger one, both of these salmon can grow to reach prodigious sizes and I can’t even start to imagine what a 70 or 90+pounder must feel like on the rod. What unbelievable catches they must have been!

Can Atlantic and Pacific Salmon Be Found in the Same Body of Water?

While wild Pacific and Atlantic salmon can’t be found in the same waters, stocked and/or landlocked fish can definitely do so. The most popular example of a body of water that contains both Atlantic and Pacific types of salmon is the Great Lakes in North America.

Most notably, it is Lake Ontario that contains both Atlantic, chinook, and coho salmon.

As a matter of fact, Lake Ontario once held the biggest population of landlocked Atlantic salmon in the world, which is a historical fact that not many people know about.

In the 19th century, the fish suddenly vanished and were absent from the lake for many decades.

Fairly recently, however, thanks to huge population restoration efforts, the Atlantics have made their way back to Lake Ontario and are now, once again, considered an established species in the lake and its tributaries.

Chinook and chum salmon, on the other hand, have only been in Lake Ontario for the past 50 years or so and are still being stocked annually to this day.

This shows that both Atlantics and Pacifics can co-exist in one and the same freshwater system.

PRO TIP: Want to know the best ways of fishing for salmon in the Great Lakes region? Then check out this extremely helpful guide on Amazon!

Can Pacific and Atlantic Salmon Crossbreed?

As Atlantic salmon and all of the Pacific salmon have different numbers of chromosomes and do not share the same type of genus, they are not able to interbreed and create offspring.

Besides, the wild populations of the Pacific and the Atlantic could never reach each other, even if they would be able to crossbreed.

Additionally, neither the landlocked salmon of e.g. the Great Lakes, nor the often escaping farmed Atlantic salmon are capable of interbreeding with other types of salmon.

Although, it has been observed that the latter have managed to crossbreed with brown trout.

This is a much-debated question that obviously depends on personal taste, as well as the habitat the fish are found in. And while most people eat and enjoy Atlantic salmon, the salmon type that is generally considered the tastiest one is the Pacific sockeye salmon.

But the people who’ve eaten both farmed and wild salmon will usually agree that wild salmon taste a lot better than farmed ones.

And among those wild-caught salmon, the sockeye really stands out, both when it comes to taste and texture. Sockeyes that have been caught in saltwater are especially delicious, as the saltwater further enriches the meat’s taste and makes it firm-textured.

Sockeye also have a lower fat content than other salmon species, which is an appreciated fact by many gourmets.

RELATED ARTICLE: Everything You Need to Know About Commercial Salmon Fishing in Alaska

What Type of Salmon Is Used for Sushi?

In North American and Japanese restaurants, both chinook, chum, and sockeye salmon are commonly used for making sushi. Most restaurants in Europe will only use farmed Atlantic salmon for their sushi.

Naturally, both the American and Japanese markets have a great supply of Pacific salmon, which is why they have the luxury of using them over farmed Atlantics, which simply do not have the same quality of meat or taste to them.

As I live in Scandinavia, the fact that we can only eat farmed salmon when eating sushi is really unfortunate, as I love sushi and would like to try the “real deal” one day!

When it comes to making your own sushi at home, you should however only use farmed Atlantic or farmed Alaskan salmon, as the risk for parasites in raw Pacific salmon fish is simply too high.