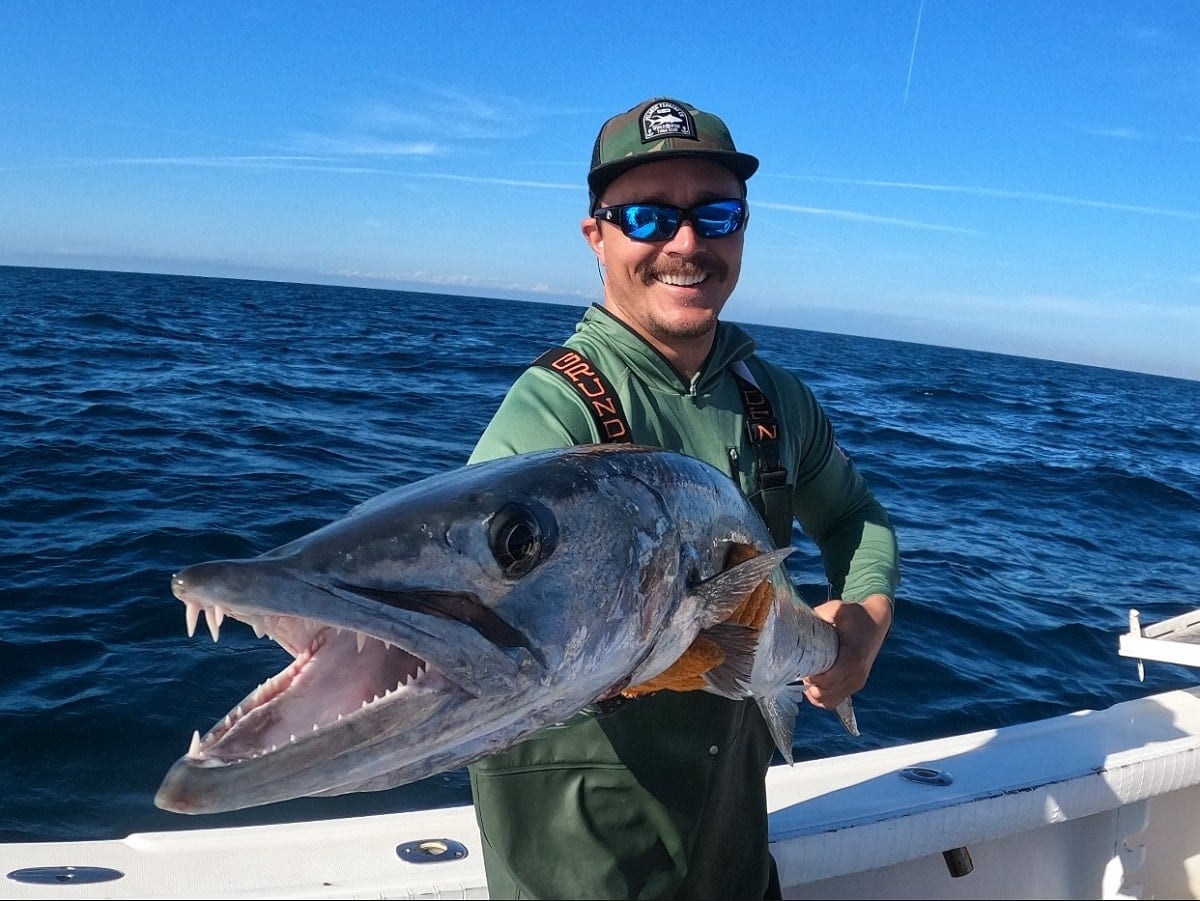 Barracuda are awesome saltwater predators with mouths full of razor-sharp teeth. Whenever you catch one and that mouth of terror starts to open, revealing its many teeth, you know that unhooking this fish with great care is probably a good idea!

Barracuda teeth are both very sharp and plentiful, as this fish actually has two sets of teeth. One outer row of smaller, very sharp teeth, and one inner row of larger teeth. In total, barracuda can have up to 200 teeth. With them, they can bite, tear, and pierce through both flesh and bone.

Keep reading this article to find out all the toothy facts about barracuda teeth, if they are dangerous to humans, and what tackle you should be using when fishing for them.

The great barracuda (Sphyraena barracuda) is a very popular saltwater food and game fish that is targeted by anglers all around the world. It is known for its awesome speed, ferociousness, as well as for its super sharp and monster-like teeth.

Indeed, if you have never laid eyes on or caught a barracuda, seeing one for the first time can be quite a scary experience. Those teeth will freak you out, that much is for sure!

The barracuda has two sets, or rows of teeth, which make it the perfect predator. The outer row, which is found on its upper jaw, consists of plenty of small, needle-like teeth that are used for shredding and severing.

The inner row, on both upper and lower jaw, is made up of fewer, much larger fang-like teeth that the barracuda uses to grip and pierce its prey with.

The upper and lower canine-like teeth at the front of its jaws are by far the largest ones.

Amazingly, they perfectly fit into holes in the opposing jaw, making it possible for the fish to fully close its mouth. This is yet another marvelous feature of the barracuda.

This fierce predator can have anything from 140 to 220 of those teeth in its mouth, depending on the size of the individual specimen.

In adult barracuda, there can be around 100-140 smaller needle-like teeth, 60-80 bigger canine-like teeth, and 10-20 large fang-like teeth at the front of the jaws.

What’s really interesting is the way the barracuda uses its teeth in order to hunt and kill its prey.

According to a research paper on the bite mechanics of great barracuda from 2007, it can actually attack and overwhelm fish much larger than the gap of its jaws.

In order to be able to swallow such large prey, the barracuda uses a deadly combination of sharp teeth and violent headshakes that results in the prey being severed into smaller pieces.

This effective attacking and killing behavior is referred to as “ram-biting”. And so, thanks to its immense power and extremely sharp teeth, the barracuda can not only tear through flesh but also bone.

These highly evolved features explain why the great barracuda is such a ferocious marine hunter-killer with only a handful of natural predators.

How Big Can Barracuda Teeth Grow?

The fang-like front teeth of the great barracuda can easily have a length of more than 1 inch, with an average length of 0.5-1 inches.

However, given the fact that great barracuda can reach a body length of over 6 feet, anglers have reported fish with teeth that were as long as 1.5 inches.

And if you believe the tales and legends of some fishermen, there are barracuda out there in the deep blue sea that have a bone-chilling teeth length of more than 2 inches. That, dear reader, is the stuff nightmares are made of!

RELATED ARTICLE: Want to know all the facts on wahoo teeth? Then make sure to also read this article!

Can Barracuda Bite Through Fishing Line?

Like so many other toothy predators, the barracuda manages to bite through fishing line. No matter how thick your monofilament or braided line may be, such materials are no match for a barracuda!

The same holds true for fluorocarbon, even though some anglers swear by it when fishing for predators with sharp teeth. To be honest, I wouldn’t go for a fluorocarbon leader when targeting barracuda! Sure, its invisibility can be a great plus and get you more bites, but what does that help if those result in bite-offs, right?

To be 100% certain, the best leader choice for barracuda is a solid single-strand wire of about 40-50lb test.

With a leader like that, no barracuda will bite you off and you can be sure to land each and every fish that takes your lure or bait! Check out the best wire leader material for barracuda on Amazon here.

Pro Tip: In order not to injure yourself when handling and unhooking a barracuda, wearing an armored glove can be a very smart idea. Such gear doesn’t cost much and might save you a trip to the hospital! You can find a reliable and 100% puncture-proof fish handling glove on Amazon here.

Despite their powerful jaws, flesh and bone-tearing teeth, and ferocious strength and aggressiveness, barracuda almost never attack humans. A mere 25 incidents have been reported over the last 100 years, and so it’s safe to say that deliberate attacks on humans are extremely rare.

If an attack occurs, it’s usually due to bad visibility underwater. In such cases, barracuda in murky waters have mistaken divers for larger prey or were attracted by their shiny masks, camera flashes, or knives.

Could a Barracuda Kill a Human?

This is an interesting, yet purely theoretical question, as there have hitherto been no fatal attacks by barracuda. And while it could be possible for a person to die of blood loss from an unfortunate barracuda bite, this risk must be considered extremely low.

For one thing, barracuda are actually fairly passive and shy in the presence of humans, and most of the time, they don’t dare to approach a swimmer or diver at all.

The attacks that have been reported were of a very short and careful nature; instead of a full-blown attack and “ram bite” frenzy, the barracuda probably acted out of instinct and pure interest, simply testing and further examining what was in front of it by a semi-serious bite or two.

For another thing, if a barracuda would launch a serious attack on a human, that diver or swimmer could quite easily fight the fish off with the help of his or her fists, or, if present, a knife or any other sharp and hard object.

Barracuda are simply not big or strong enough to be able to fully overwhelm an adult human being.

With that said, it’s of course always a good idea to approach a predator with caution and respect and to not provoke it, as you never know how such an animal might react.

Where to Buy a Fishing License Online? (A State-By-State Guide)
← Previous
5 Best Tench Fishing Rigs (And How to Fish Them)
Next →
Click here to cancel reply.