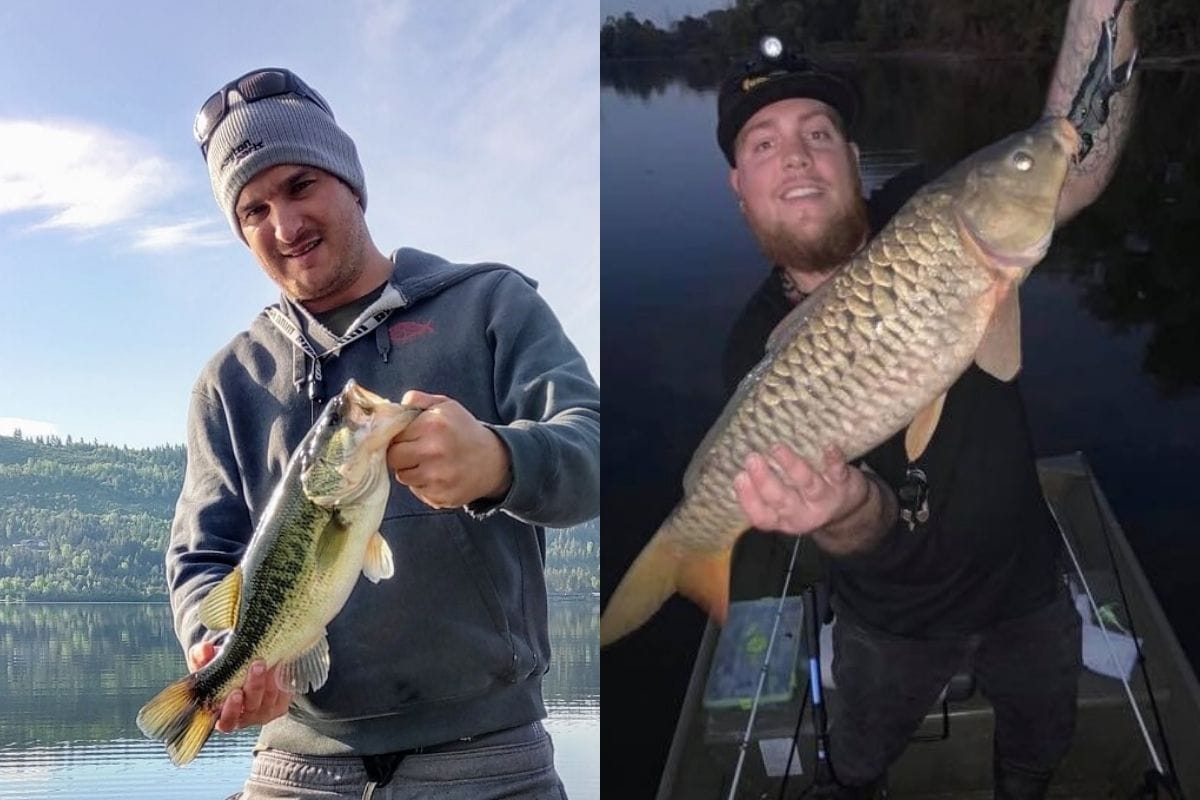 Plenty of anglers in North America are wondering whether bass and carp can coexist in one and the same body of water and how well they actually get along. In order to answer all of their questions, I wrote this article on the very interesting topic of bass vs. carp.

Bass and carp actually can coexist and do so in plenty of waters in both the United States and Canada. However, in waters that have an overpopulation of carp, bass populations can be affected negatively and may only recover if the number of carp is reduced and regulated.

If you want to know more about the topic of bass and carp coexistence, all you have to do is continue reading this article.

Disclaimer: This article is based on several published scientific references in order to make it more authoritative and trustworthy.

Can Bass and Carp Live Together?

Bass and carp can most certainly coexist and actually do so in many North American waters. Naturally, these two fish species are not enemies and won’t cause the opposite population to decrease or disappear.

Problems can, however, arise, if a carp population grows out of proportion, which, unfortunately, is the case in some North American waters today.

Unlike in Europe, most carp populations in the US and Canada are not regulated and can hence overpopulate certain waters. And so, as is the case with any fish species that grows out of proportion, they can indeed have a negative impact on other fish populations, such as bass.

But generally, the problems that are associated with the topic of carp and bass are minor to nonexistent. Bass, as well as other types of anglers, are however quick to blame carp for various problems that arise in their fishing waters.

This is quite understandable though, as carp are such obvious and visible elements in many waters and really not at all considered a popular game fish.

Turbidity is one such issue that’s commonly blamed on carp.

And while they can cause some smaller waters with very soft and silty bottom sediments to cloud up, most bigger waters they are commonly found in get cloudy or muddy not because of the presence of them, but various other reasons that are often less obvious and visible.

Such often include either hydrological changes, fluctuation of water levels, or heavy rainfall.

Another issue commonly associated with carp is the reduction of aquatic vegetation, e.g. weeds, plants, and grass. Here, it is actually not the common (or mirror) carp that should be blamed, although there is some evidence of them reducing soft-rooted and shallow-leaved vegetation, but rather the grass carp (which, funnily enough, isn’t a carp species at all though).

No matter what species we are talking about though, the fact remains that uncontrolled population growth will eventually cause problems for the respective water and the bass, other species, and the carp themselves that live in it.

This is why it is vital for various states’ DNR to start regulating carp populations in their waters, both in order to rectify existing issues, if there are any, and to prevent possible future scenarios in which large carp populations could affect bass populations negatively.

This would not only improve things for bass anglers (as well as ease their minds) and the water systems they fish in, but it would also raise the status of the American carp considerably, from “invasive species” to pretty awesome and interesting game fish.

Of course, a lot of work will be required in order for that to happen!

Let’s move on to some of the most common questions regarding bass vs. carp.

RELATED ARTICLE: Make sure to also read this article if you want to know the best baits and colors for largemouth bass in muddy water conditions!

Do Carp Scare Away Bass?

Spawning carp usually won’t scare away nearby bass or disturb them in any noticeable way. However, and this brings us back to the issue of overpopulation, too many carp in any given body of water can have a negative impact on all the other fish species in that same water.

If their numbers are however moderate, carp won’t scare away bass at all, as they are mostly just cruising around or feeding.

A common misperception includes the belief that spawning carp will scare away bass from the grassy areas, in which they often can be found and in which carp prefer to spawn.

However, the increased turbidity of the water that will be caused by the spawning carp in such areas (and yes, here, they will temporarily cause the water to get very cloudy), can actually be a good thing for bass.

How can that be? Well, for one thing, the carp will literally plow through the weeds and bottom structure while spawning, which will stir up the sediment and with it a lot of small insects and crustaceans. These, in turn, will attract predators, such as bass.

For another thing, smaller fish (such as yellow perch, shads, or smaller crappie) will actually move into these areas right after the carp have finished spawning, and feast on the eggs that were laid there. And as these are all preferred prey fish of bass, they will also attract them to such areas.

Do Bass Scare Away Carp?

During the spawning season, it can be observed that male largemouth bass actually scare away bigger fish when defending their nests.

One would think that this sounds quite far-fetched, but given the fact that bass males are fairly aggressive and will attempt to attack anything that gets too close to them or the eggs they guard, it actually makes a lot of sense.

Particularly so, as carp are herbivores that lack teeth and hence will have a hard time retaliating and seriously injuring the bass. Although they are certainly capable of a fair amount of bullying.

All things considered, it must be really comic to see a 6lb male bass scare the life out of a fat, old 20lb common carp.

Pro Tip: If you want to read up on some of the very best tactics and strategies for catching largemouth, you should definitely check out this in-depth guide on Amazon here.

Carp fish do not intentionally eat bass eggs, even though many anglers tend to believe they do.

Of course, some eggs can accidentally get sucked in by the carp if they are feeding around the area in which bass nests with eggs can be found, but according to a research paper, bass egg predation by feeding carp is minimal to absent.

Interestingly enough, that same research paper conducted a study on carp in water bodies that contained large numbers of bass eggs and small fry and reached the conclusion that the number of surviving bass were higher with carp around than in those waters without carp.

This can be explained via the fact that the bluegill, which are known to feed on both bass eggs and small fry, were disturbed by the feeding carp in the vicinity, as the carp kept the bluegill at a distance, away from the nests.

And so, while the surviving bass juveniles were observed to be somewhat smaller than usual, probably due to a food resource limitation resulting from direct competition with the carp for smaller insects, their survival rate was still considerably higher.

RELATED ARTICLE: Check out this article I wrote on the best lures and colors for largemouth bass in clear water conditions.

As bass are predatory fish, they will eat all kinds of other species that can be found in the waters they inhabit, including juvenile carp fish.

Many anglers have found small carp in the stomachs of predominantly largemouth bass, which does not come as a surprise at all, as young carp have the perfect body size for bass mouths and as carp are a fish species that is rich in protein.

And so, water in which carp are spawning and producing a lot of offspring, baby carp, perhaps up to 1/4-1/3lb, are definitely on the bass’ menu.

RELATED ARTICLE: Make sure to also read this article and find out whether or not carp eat other fish

Bass or Carp – What Fish Puts up the Best Fight?

In terms of raw strength, the carp definitively wins this competition, as it is one of the strongest freshwater species out there. And even though both largemouth and smallmouth bass are known for being strong fighters as well, they are no match for the extreme power of a fighting carp on the rod.

Pro Tip: If you want to get into carp fishing and learn some basic and highly effective ways of catching common carp, you can check out this helpful carp fishing manual for beginners on Amazon here.

When it comes to agility and acrobatics, however, the smallmouth bass, in particular, take home the prize!

Of course, one has to consider the difference in the size of those two species, as carp grow considerably larger than bass. But even smaller carp would outdo a bass of similar weight on the rod when it comes to fighting power.

I can tell you from personal experience that a 10lb carp can cause a lot of trouble and demands considerable strength from the angler. Especially smaller male common carp can be extremely wild and powerful on the rod.

It’s this incredible power that makes the carp such a popular species in Europe. And even in the US and Canada, rod and reel-based carp fishing is now starting to grow in popularity.

RELATED ARTICLE: Check out this article and find out if bass and catfish can get along in the same body of water

This article went through some of the most commonly asked questions regarding the hot topic of bass and carp in America. And while it is backed by research and fairly accurate for most waters around the US and Canada, where both carp and bass can be found, it’s by no means a complete picture!

I am well aware of the fact that some water systems, and their respective bass fishing communities, experience substantial problems with too large populations of carp, which is why I think it’s so important to start regulating them. I really can’t stress that enough!

I also hope that things improve swiftly for those lakes and anglers so that they can enjoy their hobby to the fullest, just like the rest of us.

This tackle is of top quality and sells at a very decent price on Amazon.

An awesome baitcasting rod of the highest quality! This rod is super lightweight, has great sensitivity and phenomenal action. Casts anything between 1/4oz. and 1 1/2oz. Fits both beginners and seasoned bass pros. Easily the best baitcasting rod for the money!

An affordable high-performance baitcaster reel that’s perfect for bass fishing with both light and heavy lures. Shimano’s stuff basically lasts forever, so you don’t have to worry about buying a new reel anytime soon! Makes for a great bass combo together with the Shimano SLX rod.

Without a doubt, one of the best braids available today. Zero stretch, great feel, and immense strength make this line the perfect pick for bass in both open and snaggy waters. Put on an 8-12lb test and you’re good to go.

Best Treble Hooks for Fishing (A Helpful Guide)
← Previous
What Is the Best Groundbait for Tench?
Next →
Click here to cancel reply.