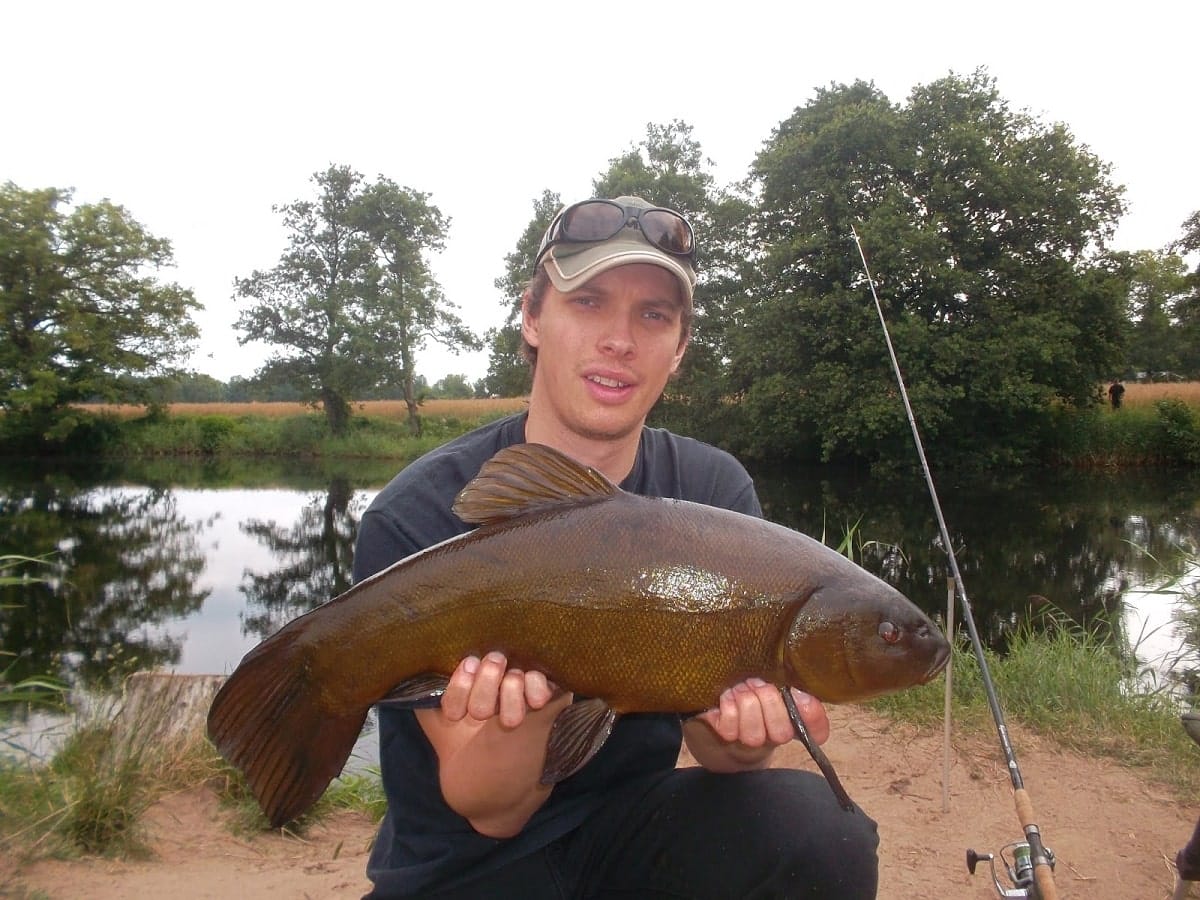 Tench are not the easiest of coarse fish, as they are rather smart and careful feeders that demand a lot of patience and know-how from the angler. But with the right baits on your hook, you will have a much easier time catching these mysterious fish.

When float fishing or ledgering with a swim or cage feeder for tench, smaller live baits, as well as smaller fake baits should be used as a hookbait. When ledgering with a method feeder, the best choices of baits would include fake corn, boilies and pop-ups.

Keep reading this article if you want to get valuable insider tips for the best baits for tench.

Tench love sweetcorn! No matter if the venue is frequently fished by many anglers or has never been fished before, tench will always take one or two grains of sweetcorn on the hook.

When fishing the lift method, I like to use just one grain of sweetcorn on a #8 or #10 hook, as I want my entire setup, and hence even my hookbait, to be as light and minimalistic as possible. Also, because I tend to loosefeed very lightly while float fishing.

On the other hand, when ledgering for tench, I often prefer to bait up with two grains of corn instead. There is a lot of feed in the swim and when the tench are entering the scen, they usually eat up copious amounts of food down there.

Pro Tip: If the tench are picky and not easily hooked, which can be the case quite often, try dipping your sweetcorn in some sweet or fruity bait dip. This can really make a lot of difference when you’re having a tough session. I have had a lot of success with the Krill Liquid by Sonubaits. You can check it out on Amazon here.

Of course, maggots will have to be included when we’re talking about the best baits for tench. This tiny creature is an extremely effective bait for tench, both as hookbait and loosefeed.

Maggots are great on the float, when fished with the cage feeder, and absolutely deadly on the maggot feeder rig.

Use a few white and red maggots on a #12-#14 hook and wait for those tench bites, they’ll probably come sooner than later! Especially so when loosefeeding larger amounts of maggots over your swim. They will go absolutely nuts for them!

Pro Tip: The maggot’s size is both its greatest advantage and disadvantage, as it is easy prey for even the smallest of fish. So, if you are fishing in venues that hold a lot of small fish, such as roach, rudd, or bleak, maggots will unfortunately not be your best choice.

Casters are a somewhat underrated tench hookbait, but this bait has the potential to produce bites when all else fails!

Never throw away your old maggots when they’ve become casters. Instead, place them in your freezer for a short while to prevent them from turning into flies and then bring them on your next tench session (if you don’t buy your casters directly, that is).

Put 2-3 casters on a slim shanked #12-#14 wide gap hook, but do it very carefully, as casters will pop open very easily. They work great on float rigs and lighter feeder rigs that you do not cast out very far or with a lot of force.

You can also put them into your groundbait, to give the tench a little more to feed on, which will keep them in your swim longer.

Worms are an ancient and classic tench bait that can be fished both on the float and on with the cage feeder. Many anglers tend to prefer really big and fat worms for tench, but I don’t really share that preference. Instead, I will use a couple of smaller and slimmer worms on my size 8-10 hook when targeting tench.

Many times, I have observed that they will either ignore a too big worm or simply just nibble on it, while they can go for a bunch of smaller worms with much more confidence.

A really deadly cocktail bait that you should definitely try out on your next session is a smaller worm and a grain of sweetcorn. This can attract even the most skeptical of tench!

Pro Tip: If you have those bigger worms, you can still put them to use! Chop them into smaller pieces using your scissors and mix them into your groundbait. The tench will find the moving pieces and the juices that’ll flow out of them absolutely irresistible!

And speaking of smaller worms; if you can get your hands om some bloodworms, make sure to use them when you fish for tench! These tiny red worms are a true secret weapon when it comes to tinca!

Bloodworms are a natural food source for tench and can be found in many venues, in which they will inhabit the silty bottoms. In some lakes, they will even be the only thing the tench will feed on.

And this comes as no surprise really, as bloodworms have a really sweet taste to them and are extremely rich in protein. They are, in other words, the perfect food for fish!

As they are extremely thin and tend to die off rather quickly, the best way to fish with bloodworms is on the float. Put a small bunch of them on a slim shanked #12-#14 hook and put on fresh and live worms fairly frequently.

RELATED ARTICLE: Check out this article if you want to read up on the best rigs for tench fishing. They will catch you even more fish, guaranteed!

The last smaller bait for tench that I want to recommend is pellets. They are not only a superb loosefeed alternative, they also make for pretty great hookbaits when float fishing or on the lighter method feeder.

Pellets are full of protein and they have a really strong and distinct flavour to them, which the tench, as well as many other fish, just can’t resist.

A 6 or 8mm pellet on the hair or directly on a #8 or #10 hook together with a hook band is a really hard-to-beat tench bait! If you’re loosefeeding larger quantities of pellets and fishing the hair rig, try to top your pellet with a smaller pop-up fake corn (described below). This will help to separate our hookbait from the rest of the pellets in your swim!

Now that we have covered the smaller baits for the lift method and the lighter feeder cage fishing for tench, let’s move on to some of the bigger baits for the heavier method feeder.

Pro Tip: Sticky Baits has a whole range of really awesome pellets. I can highly recommend their krill and bloodworm flavours. Those are really superior baits! You can take a closer look at them on Amazon here.

Fake corn is an absolute favorite of mine when fishing for tench with a method feeder or classic bolt rig on the safety clip.

For one thing, they will always stay on your hair, no matter how many smaller fish they are in your swim, how powerful and far you cast out and how wild a tench will fight on the hook. As method feeder or bolt rig fishing is a more passive way of fishing for tench, this is a huge advantage and saves a lot of time.

For another thing, fake corn is a brilliantly visible bait if you are using pop up corn, which I almost always do. It gives the bait that little extra attraction and will lure a lot of tench onto the hook. Just make sure to critically balance your hair rig, so that it is presented just a few millimeters off bottom.

Pro Tip: Enterprise Tackle has the absolute best pop-up fake corn if you ask me. You can grab a package of fake corn on Amazon right here.

Boilies are a popular bait for specimen anglers who target big tench and they are really awesome big fish baits!

Try to go for fishy and fruity flavours, such as krill or strawberry, as these tend to produce a lot of tench bites. And make sure you aren’t using boilies that are too big. Carp-sized baits are definitely a little overkill when it comes to tench, even for the bigger specimens.

8-15mm boilies are just the perfect size for tench and you can either use a single bait or a snowman presentation.

RELATED ARTICLE: Make sure to also read this in-depth article on the best boilies for tench

Similar to boilies, pop-ups are a brilliant hookbait for bigger tench that plenty of specimen anglers use when fishing with bigger method feeders or classic bolt rig setups for tench.

I personally swear by 12-15mm bright yellow pineapple pop-ups when the fishing is slow, they will kill it every time!

Their biggest advantages include the following:

All these factors make pineapple pop-ups stick out in your swim, which is why they can be so effective, I think! You can check out my go-to pop-ups for tench on Amazon here.

Sauger vs. Saugeye (How to Tell Them Apart)
← Previous
9 Best Baits for Bream (UK)
Next →
Click here to cancel reply.