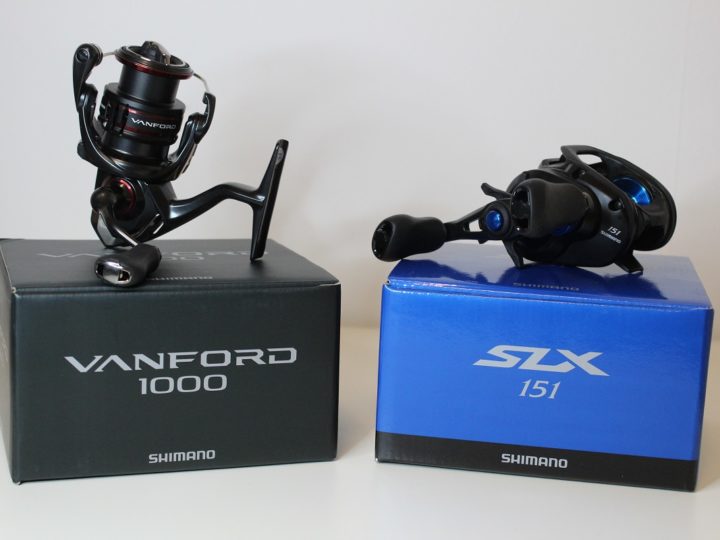 There are plenty of fishing reel brands out there! Quite a few of them don’t make any good reels at all, while others produce decent quality gear.

And then, there are a few select brands that can be associated with the creme de la creme of fishing reels. This article is dedicated to those awesome fishing reel brands.

The following selection of the eight best reel brands is partly based on my own experiences as an angler and partly on the experiences and personal views of thousands of other anglers, whom I have asked for their opinions through several online surveys.

And while opinions and brand preferences naturally always vary, there is some consensus about what makes a good fishing brand and a good reel.

So if you want to know more about said brands, their popularity, and some of their very best reel series, all you have to do is keep reading!

No matter what forum or Facebook group I surveyed, Shimano always got the pole position, and most anglers around the world will agree that Shimano is the best fishing reel brand out there!

Shimano has been in the game since the 1970s, and practically from day one, they have been known to make excellent fishing gear.

Their reels are of the highest quality, are incredibly durable, run super smoothly, and, even though many of their reels are fairly high-end stuff, they are, nonetheless, very decently priced.

I have tried out most brands, and I can tell you with absolute certainty and confidence that Shimano’s reels are the best.

They are pretty close to the quality of some of the other top-ranked reel brands, but Shimano reels are still the undefeated number one for most fishing methods and species.

Many anglers, including myself, speak very highly of Shimano’s spinning reels because they have excellent performance and run so unbelievably smoothly.

Most of their reel series are also incredibly lightweight, which will give you a superb fishing experience.

One of their best spinning reels is probably the Shimano Vanford. This reel is some next-gen fishing gear! I own a 1000 model myself and love it!

Whether you’re targeting walleye, perch, pike, steelhead, or lakers, the Vanford’s got your back. Both in open water and through the ice!

In recent years, Shimano has also stepped up its baitcaster game and has released quite a few remarkable reel series that more and more anglers use.

In particular, the Shimano SLX Baitcaster is a frequently purchased piece of gear among both bass and pike anglers.

Thanks to its incredible technology and performance, this fine low-profile baitcasting reel enjoys ever-growing popularity and is now part of most predator anglers’ gear arsenals.

The SLX’s high-tech DC brake system is particularly noteworthy, as it’s both extremely strong, precise, and easy to operate. This also makes it a great pick for anglers who are new to baitcasting.

RELATED IN-DEPTH ARTICLE: Why Is Shimano the Best Fishing Reel Brand Out There?

Daiwa is undoubtedly the second reel brand giant and, just like, Shimano, a Japanese fishing gear manufacturer that knows its craft!

Daiwa has been making high-quality fishing reels since the late 1950s, making it one of the world’s oldest and most experienced fishing brands.

In North America, they are mostly known for their top-of-the-line fresh and saltwater spinning reels, while they enjoy vast popularity for their carp fishing reels in Europe.

Given the fact that so many saltwater anglers and carp guys prefer Daiwa reels, I think it’s safe to say that Daiwa’s strength lies primarily in producing heavy artillery reels for big and powerful species.

The Daiwa BG saltwater spinning reel is the perfect example of that. It’s probably one of the most robust and durable reels you’ll ever encounter!

No matter what you hook up to out there in the ocean, the BG will land you that fish every time!

Pflueger is definitely one of the most popular reel brands among North American walleye, crappie, steelhead, and lake trout anglers!

I don’t think you’ll find such an angler who doesn’t have at least one Pflueger reel in his arsenal (and it’ll probably be more than one!).

The walleye guys especially worship Pflueger, and for good reasons!

Pflueger fishing reels are made in the US and stand for incredible quality, excellent performance, and really affordable prices.

Most anglers will tell you that Pflueger reels are the best for the money, and, especially when it comes to one of their reel series, I think they’re probably right!

The reel I am referring to is the highly popular Pflueger President. This spinning reel has got it all, and it’s the number one choice for most guys targeting walleye and lakers.

Many crappie and steelhead anglers also prefer using a President for their fishing.

It’s the perfect pick for spinning and jigging, in open water and through the ice!

RELATED IN-DEPTH ARTICLE: Are Pflueger Reels Made in America?

Now, we’re leaving the top 3 brands and their spinning reels behind and enter baitcaster territory.

And even though both Shimano and Daiwa make pretty great baitcasters as well, Abu Garcia seems to be the number one brand most anglers think of when baitcasting reels are the topic of discussion.

Who hasn’t heard of the classic Ambassadeur or the more modern Revo series? Both of which are two of Abu Garcia’s very best reel lineups!

The Ambassadeur, which, by the way, is one of Abu’s very first reel models, dating all the way back to 1952, is used mainly for saltwater fishing, trolling, and fishing for catfish.

It’s a powerful and smooth reel that you can load up with very thick mainline, making it the perfect pick for big game species and heavy cats.

It’s definitely a special feeling you get when you reel in a monster fish with an old-school reel like that. And the best thing of all is that it still has excellent performance and quality to it!

The Revo series, on the other hand, is a highly popular choice for the big freshwater predators, such as northern pike, musky, and largemouth bass.

Many Abu fans will claim that the Revo is the best baitcaster you can buy for the money, and I share this opinion with them!

I have a Revo Beast myself, and it’s an absolute dream when casting for pike.

It’s super smooth, casts great, has a simple setup (which is very beginner-friendly), and probably has one of the best and most precise drag systems you’ll ever encounter.

Compared to other brands, it’s also pretty affordable, giving you a highly advanced reel for a mid-range price!

Okuma is another popular Japanese reel brand that is known for its high-quality mid-range spinning and trolling reels.

Many beginners tend to start their fishing adventure with an Okuma spinning reel, and for the price, it’s a very suitable option.

Because while Okuma spinning reels are pretty basic, they are made of high-quality materials and function the way you’d expect them to do.

The fact that they are also quite durable makes Okuma a solid pick for newbies and anglers with a limited budget.

The Okuma Ceymar is, without a doubt, their most popular spinning reel model.

It’s a beautifully designed, very compact, and lightweight reel that stands for an excellent fishing experience!

You can check out the Okuma Ceymar on Amazon here

Those are high-tech reels with incredible performance and power, and they sell at a surprisingly low price.

The Okuma Coldwater Linecounter Trolling Reel is the perfect example here; a super popular reel that’s perfectly suited for your high-speed trolling adventures and that sells for around 100 bucks!

You can find the Okuma Coldwater on Amazon here

If you ask me, it’ll be hard to find a better reel for the money!

Penn is perhaps the world’s number one saltwater reel brand. They certainly give both Daiwa and Shimano a good run for their money!

When it comes to their best spinning reels, the Penn Battle is very high up there.

As the name suggests, this is an ultra-powerful high-end tank of a reel built to fight big saltwater species.

Most inshore anglers and guides will have a few Battles onboard their boat, and once you fish with one of those power reels, you’ll know why!

If we’re talking level wind reels for those big and angry offshore big game species, the Penn Squall is your best pick!

This very powerful and well-designed reel will help you land any big old fish.

And the level wind function is great for anglers who don’t have difficulties leveling the line themselves when retrieving it manually, which is often the case when kite fishing.

That’s why many fishing charters use Squalls for their customers!

The last part of this article is dedicated to two pretty amazing budget reel brands.

Piscifun has quickly made its way through the ranks and managed to become a fairly popular reel brand.

I think the price is Piscifun’s biggest strength because it’s pretty much impossible to find a good-quality baitcaster for such a low price!

And they do make decent gear. Otherwise, Piscifun reels wouldn’t be so popular and highly spoken of.

The Piscifun Alijoz is, by far, their most popular baitcasting reel, and I really don’t know if you can find a decent baitcaster for less money.

The quality isn’t as high as Shimano’s or Daiwa’s, but to be honest, quite a few anglers really don’t need such high-end gear for their fishing needs.

For those who are new to baitcasting or just can’t or don’t want to spend too much money on a baitcasting reel, a Piscifun reel is a top-notch alternative.

And last but not least, we have Lew’s to talk about. Lew’s is a well-known and widespread reel brand that makes very decent budget spinning reels.

They make quite a few baitcasters as well, but in my opinion, the spinning reels are the brand’s flagship.

Like Piscifun, they manufacture reels with some of the lowest prices on the market. At the same time, however, they promise good quality, performance, and durability.

And for many of their budget reel series, this is indeed so!

They somehow manage to use high-quality materials and then sell their reels for around €50-70. Some models even sell as cheap as $30, which is pretty unheard of if you ask me.

In my opinion, one of their best budget reels is the Lew’s Mach 2.

This compact and lightweight beauty is a solid and reliable all-round pick that can be used for most lighter spin fishing methods.

Thanks to no less than ten high-quality ball bearings, almost all anglers who fish with the Mach 2 praise its incredible smoothness.

Once again, a great allrounder that sells for a very affordable price!

Shimano vs. Pflueger (Which Brand Is Better?)
← Previous
When Do Lake Trout Spawn? (Interesting Fish Facts)
Next →