11 Best Fishing Youtube Channels (For All Types of Fishing) 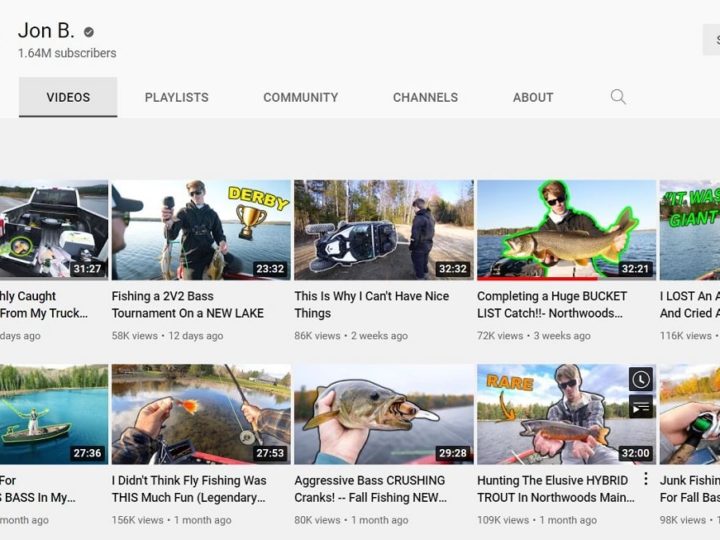 YouTube and fishing go well together and have done so for many years. Today, there must be millions of fishing channels on the platform, and the number is ever increasing.

I watched hours and hours of content on the Tube to find the best of the best when it comes to fishing YouTube channels. It wasn’t easy, and it took me a while, but I am pretty satisfied with the 11 channels I chose for this article.

While most of them are of only poor to medium quality, there are quite a few ones that really stick out and can produce fantastic fishing videos.

No, I take that back! Those guys don’t just make videos; they create captivating visual fishing experiences!

Keep reading this article to learn more about these incredible fishing content creators and their awesome fishing adventures on YouTube.

Jon is an authentic fishing and YouTube legend. The guy has been hammering out videos since 2009!

Today, he has over 1.6 million subscribers and more than 1,200 videos on his channel.

It shows you how far dedication, passion, and consistency can get you. 12 years is a very long time to consistently produce high-quality and engaging fishing YT videos! That alone demands a massive amount of respect if you ask me!

Jon B. can be called the complete YouTube angler. While he’s mainly targeting all sorts of freshwater species in the US, he also has plenty of saltwater content on the channel.

Additionally, his success and lifestyle have allowed him to fish and travel the world. In 2021, for example, he produced an award-winning and awe-inspiring movie about fishing in Australia.

Seriously, I don’t think there is a species out there that Jon hasn’t targeted!

He is a highly-skilled angler and has insane editing skills, making his videos a true pleasure to watch.

If you’re into saltwater fishing, BlacktipH is THE Youtube channel to subscribe to! Josh is an insane big game angler who’s managed to build one of YouTube’s largest and most successful fishing channels of all time.

I mean, a fishing channel with almost 4 million subscribers is just unheard of, even in this day and age!

Jon and his crew catch anything from giant grouper to huge tarpon, marlin, or 1000lb+ tiger and hammerhead sharks.

There are also plenty of celebrities fishing with Jon, making the channel really entertaining and exciting.

The channel’s various huge shark videos are especially awesome and will captivate you behind your screen for many hours.

So if you enjoy well-produced and entertaining big game fishing videos with giant catches, you should check out BlacktipH right now!

Now we move on to the more niched-down freshwater fishing YouTube channels.

Addicted Fishing is your top pick on the Tube when it comes to salmon and trout fishing.

Giant chinook, trophy browns, big lake trout, colossal steelhead, the list goes on and on, and these guys catch them all!

The channel has almost 700 videos and publishes two videos per week, which is pretty insane, given the high quality and effort they put into every one of their productions.

I especially appreciate the great variety of their target species and methods, as well as their many catch and cook videos.

The guys manage to show you every angle of the salmon and trout game if that’s at all possible.

Go check out Addicted Fishing on YouTube if you want to learn new skills and improve your fly, bobber, or spin fishing for those big old salmon and trout.

The NDYakAngler has some pretty amazing pike fishing skills, and if you enjoy videos about predator angling from a kayak, he’s your guy!

Who hasn’t seen the above video where he catches an absolute monster pike on a yellow duck lure (which has become very popular since that video was released, by the way).

I don’t know how many times I’ve seen it in various Facebook groups, but probably at least a dozen times or so.

To this day, it’s gotten more than 12 million views, which is is pretty impressive for a pike fishing video.

It’s just one of those uploads that went utterly viral, I guess. But the YakAngler’s got much more than that in store for you!

He manages to catch plenty of huge northern pike, and the fighting and landing scenes, all filmed from his kayak, are really something!

Next up is Uncut Angling, which is as funny and entertaining as it is informative and awesome!

While the channel has videos on different species, such as northern pike, crappie, or lake trout, the channel’s best productions are its musky videos!

Aaron is one mad and highly skilled Canadian musky angler, and the fish he manages to catch are beyond trophy levels!

Pretty much all of his YT videos manage to combine humor with tons of valuable tips and tricks on methods and tackle.

And sometimes, the scenes he manages to record are just unbelievable!

The video above is an excellent example of that. In it, Aaron catches a big musky on the figure 8. He filmed that catch from beginning to end, which is a pretty rare thing in itself.

To top it all of, he catches that fish on a homemade bucktail made of a fidget spinner and his own hair!

Want to watch more videos like that? Then go check out Uncut Angling on YouTube right now!

RELATED ARTICLE: Check out the best online fishing stores in the US

While his videos are not about walleye fishing exclusively, most of his content focuses on this awesome gamefish.

Tom’s got plenty of really well-produced and highly informative videos on how to catch eyes on open water and through the ice.

He covers everything from bait and lure choices to the best rod and reel setups, mainlines, techniques, seasons, fish finders, and more. If you’re new to walleye fishing or want to polish your skills, this is definitely the right dude to subscribe to!

Judging from the way he’s able to explain all kinds of methods and techniques, and based on all the cracking catches he does on camera, I’d say Tom Boley is probably one of the most walleye anglers on the Tube!

Up next is YouTube’s most informational and entertaining crappie channel. Crappie Head TV with DeeCrappie teaches you everything you need to know about catching those slabs.

Dee is a very passionate and authentic angler who combines his excellent fishing skills with a good portion of Texan humor.

Crappie Head TV has only been around for a few years but has already gathered over 80k subscribers, which speaks for itself, I think!

Dee’s the real deal, and the way he includes his audience in every video he produces is exceptional. He treats his viewers like family, which, in my opinion, can get you a long way on the Tube.

And man, does he know his crappie fishing! Besides catching about a million fish in his videos, he’s also never short of a secret tip or expert hack that’ll catch you more fish.

If you’re into crappie fishing and want to learn from one of the best, go check out Crappie Head TV on YouTube right now!

The bass category was a tough one because there are so many good bass fishing channels out there! But when it comes to informational and valuable content, Bass Resource definitely takes home the prize!

I mean, Glenn May, who runs both the channel and bassresource.com, is nothing less than a bass legend!

And the fact that the website has been around since the mid-90s gives the YouTube channel even more credibility!

Bass Resource’s videos are packed with excellent content and probably the best and most effective bass fishing tips on the entire Tube.

They pin every technique, lure, and bait down to the molecular level and explain everything you got to know in extreme detail.

I am not exaggerating when I say that Bass Resource is probably the most educational fishing YouTube channel out there!

Go ahead and check out the channel right now; you won’t regret it!

RELATED ARTICLE: Read this article if you want to know more about the best female fishing channels on YouTube

No list of the best fishing YouTube channels would be complete without a proper ice fishing channel, which is why I included Jay Siemens.

This is another Canadian angler who really knows his game.

And boy, does he like ice fishing! He targets every possible species through the ice: walleye, lake trout, perch, burbot, northern pike, crappie, bass (which is not super common on YT), and many more.

He also has plenty of videos explaining ice fishing gear in great detail, everything from using your electronics the right way to camping on the ice and properly setting up your ice shack.

Check out Jay Siemens, and get ready for the hard water season!

I also wanted to cover two channels from Europe. The first one is a real international success story called Kanalgratis.

While those guys started out with a really awesome predator fishing channel based out of Sweden called Kanalgratisdotse (Kanalgratis.se), the franchise has recently branched out to many more countries, including Germany, France, the Netherlands, and the US.

It’s the only channel I know of that made such a move. And while everything on the Tube takes time, their other channels are already making excellent progress.

Internationalizing a YouTube channel is a genius and unique idea, and I wish them the best of luck with this endeavor!

The channel’s core is its Swedish fishing YouTubers around Tobias Ekvall, who’s been at it on the Tube for well over ten years.

I actually live in the same city as Tobias and have followed his career with great interest.

He and his fellow YouTubers are both skilled content creators and anglers, and they target everything from Scandi pike and Dutch perch to trout, salmon, cod, and giant halibut up in Norway.

Head over to the Kanalgratis YouTube channel if you want to follow Tobias and his crew on their incredible fishing adventures.

RELATED ARTICLE: Want to become a fishing YouTuber and need valuable tips on how to get started? Then check out this article as well!

The second Euro channel is Fish with Carl (formerly known as Carl and Alex), which, in my opinion, is Great Britain’s best carp fishing Youtube channel.

Carl and Alex are two brothers who live and fish in England and have been doing the YouTube game for well over 15 years.

Over the years, they have evolved into two outstanding anglers, content creators, and entrepreneurs.

They create excellent content, give constructive tips, and constantly develop new ways of innovating and reinventing themselves as filmmakers and anglers.

I think that these two have got some of the very best carp action videos on the Tube, and the amount of giant carp they bank is unbelievable.

So, whether you’re an American or European carp angler, if you enjoy captivating carp fishing adventures on YouTube, go and subscribe to FIsh with Carl right now!