Brook Trout vs. Splake (How to Tell Them Apart) 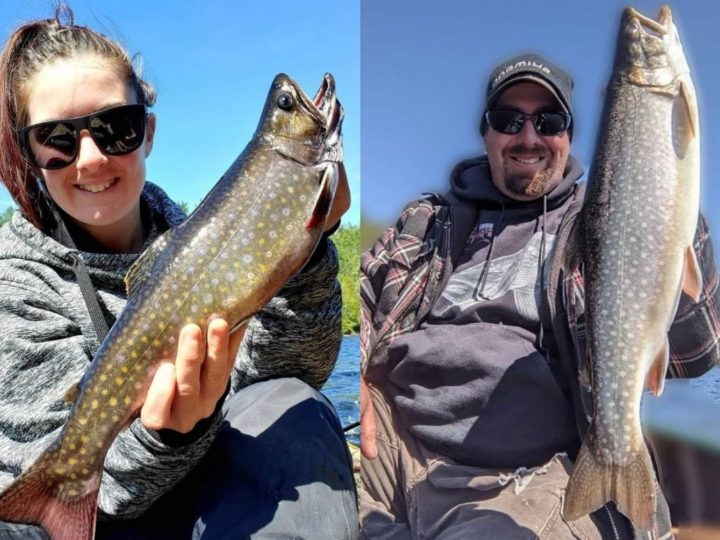 Being able to identify all the different trout and char species is difficult enough, but when it comes to trout hybrids, identifying your catch can be even trickier! Two of the hardest trout fish to tell apart are brook trout and splake. So, I decided to write an article that can help you differentiate between the two.

While these two trout species have a fairly similar body coloration, splake lack the brook trout’s vermiculations. The splake’s tail is slightly more forked than that of the brook trout and splake are the bigger of the two fish. Brook trout also have fewer appendages than splake.

If you want to know everything about the interesting topic of brook trout vs. splake, all you have to do is keep reading!

What Is the Difference Between Brook Trout and Splake?

As splake are hybrids of brook trout and lake trout, they closely resemble both of these species, making it fairly difficult to identify them.

More specifically, splake are the result of the crossing between a female lake trout and a male brook trout. As many waters contain both parent species, hybridization occurs fairly regularly, resulting in lakes that contain all three trout types.

The difference between laker and splake is somewhat greater than that between brookie and splake, which is why so many anglers confuse splake with brook trout!

And while the differences are extremely subtle, they are nevertheless a few certain ways of telling them apart. Let’s check them out!

While both brookie and splake have more or less the same average and maximum length, splake take after their lake trout parent and are the somewhat heavier of the two species. Mostly due to the fact that brook trout are slimmer than splake.

However, this difference makes itself apparent only in bigger fish. When it comes to smaller splake and brookies, you’ll have to look for other differences!

Splake will only have light or white spots on its dark body, once again closely resembling its lake trout parent.

And only brook trout will have those insanely beautiful red dots surrounded by blueish halos on their flanks!

The tail of the brook trout is almost perfectly squared, while that of the splake is moderately forked.

Here again, the splake has a closer resemblance to the lake trout, which most commonly has a very deeply forked tail.

This is, by far, the surest way of telling a splake from a brook trout, but it requires you to kill your catch, as you’ll have to cut it open.

All trout species have worm-like appendages, called pyloric caeca, which are located on their intestinal tract right after the stomach.

If you cut your trout open, you can count the number of appendages in order to know if you’ve caught a brookie or a splake. Brook trout will have 20 to 50 of those appendages, while splake will have 65 to 85 of them.

RELATED ARTICLE: Want to know how to tell the difference between lake trout and splake? Then make sure to also read this article!

Where Can Brook Trout Be Found?

The species has also been introduced to many other parts of the world, including most of Europe, Argentina, and New Zealand.

Here, most of the introductions were successful, resulting in the establishment of large, wild, and self-sustaining populations of brook trout.

The brook trout’s habitats include large and small lakes, rivers, creeks, streams, and spring ponds that hold water of high purity and a narrow pH range, as this species is extremely sensitive to poor oxygenation, pollution, and pH changes in the water (e.g. by acid rain).

Pro Tip: A lot of anglers catch their biggest brook trout on small inline spinners. These wrok very well in shallower rivers, streams, and creeks, where brookies can usually be found. You can check out a set of really effective brook trout spinners on Amazon here.

Where Can You Find Splake?

Naturally, splake can be found in many water systems that hold both lake and brook trout. Their numbers in such waters are however fairly low, as splake rarely reproduce and have a pretty poor spawning success rate if they do.

Instead, artificially bred splake are far more common. These intentionally bred hybrids are usually introduced into cool water systems that cannot sustain lake or brook trout. Because splake have a higher tolerance level than either of the two parent species, they usually thrive in such waters.

Splake have been successfully introduced in such waters all over the US, and due to the fact that they basically do not reproduce, they are used as pure game fish.

Some of North America’s best splake fishing waters are the Great Lakes, where they are being annually stocked in great numbers in near-shore water areas, to be conveniently fished for from land.

Pro Tip: Vertical jigging can be absolutely deadly for big splake, especially in larger lake systems. Catching a big and angry splake on a light vetical jigging rod is both fun and a real challenge for the angler. Check out the best jigging rod for splake on Amazon here.

What Is the Biggest Brook Trout Ever Caught?

The All-Tackle World Record for brook trout is a truly ancient one, as it has been undefeated for more than 100 years!

The biggest brook trout ever caught is a fish that weighed 14lb 8oz and was caught by angler J.W. Cook in the Nipigon River (Ontario, Canada) in 1915.

There’s gotta be bigger brookies out there somewhere. The question is, where and when will a new world record be caught?

PRO TIP: Check out the visual summary of this article in the related brook trout vs. splake web story here!

What Is the World Record for Splake?

The biggest splake are found in Ontario (Canada), as the region has successfully run a program for selective breeding of the species for many years.

Naturally then, the world record splake was caught in Ontario. More specifically, in Georgian Bay back in 1987 by angler Paul Thompson.

Splake that weigh over 20lb are extremely rare and it won’t be easy beating this world record!

All images courtesy of Andre Charron