Can You Catch Pike with Hot Dogs? 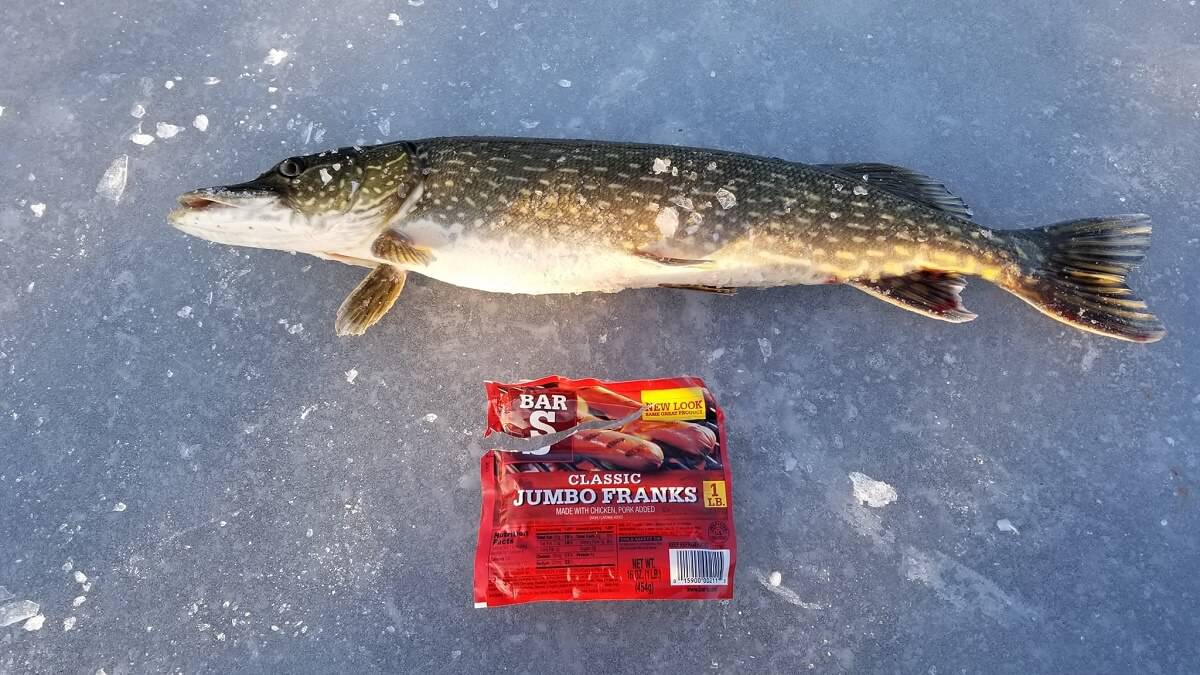 Pike are known to go for a large variety of both live and dead baits.

As many anglers in North America are pike fishing with hot dogs, I wanted to find out more about this somewhat odd choice of bait and did some research in order to answer the much-discussed question: can you catch pike with hot dogs?

As it turns out, it is really possible to catch pike with hot dogs as bait, as many anglers have managed to catch plenty of fish on them, both on the ice and in open water. Most commonly, they are fished using tip-ups through the ice and slip bobber rigs during the rest of the year.

If you want to know more about hot dogs as fishing bait and how exactly you should present them, all you have to do is keep reading.

PRO TIP: Need to gear up for first ice? Then check out this quality equipment on Amazon.

It’s very cost-effective and durable. Everything you need for your ice fishing adventures!

As northern pike are both predators and scavengers, they will almost anything that they can find and fit in their mouths. While mostly keeping to live prey, they do not at all shy away from dead baits either.

And as curious and inventive anglers have tried fishing with hot dogs for them as well, it has been established that pike, in fact, can be caught on them as well!

While this sounds a little weird at first, it really isn’t such a big surprise, considering the fact that there are very effective dead baits for pike that cannot be found in their natural environment.

The most popular of which include various saltwater baits such as:

And while these fish do not occur in the pike’s environment at all, they do have a strong scent and definitely stick out underwater.

Guess what; so do hot dogs! Not only do they smell pretty intensely, but they are also extremely rich and nutritive foods (at least for pike). Among other ingredients, they can contain the following:

All in all, a really good meal for a hungry pike, especially in winter, which is probably why hot dogs actually work as pike bait, and fairly well at that!

How to Ice Fish with Hot Dogs for Pike?

The vast majority of North American ice anglers will use hot dogs as bait in combination with either a tip-up, a tip-down, an iFish pro, or a jaw jacker, meaning that they suspend the bait at the desired fishing depth under the ice, where it will remain until a pike finds it.

You can pick up a couple of classic beaver dam tip-ups on Amazon right here. Those are perfect for ice fishing big northern pike!

This is common practice for both live and dead bait, and so presenting a whole hot dog in that fashion is definitely an effective way to ice fish for northern pike.

When it comes to the actual fishing depth, your best friend, as always, is experimentation!

No matter what bait you are using, you will always have to find the right depth.

This could be directly under the ice, in midwater, just off the bottom, or, in some cases, even on the bottom itself.

Pro Tip: If you are able to fish with more than one tip-up or ice rod, cover different fishing depths when you start off and adjust all of your rods to the one depth that is producing bites.

The ideal end tackle for ice fishing with hot dogs would be a quick-strike rig, which is a wire or thick fluorocarbon leader with two size 4-6 treble hooks.

This setup makes a lot of sense for using a hot dog as bait, as the two trebles will allow you to:

RELATED ARTICLE: What is the Best Leader for Ice Fishing Northern Pike?

How to Catch Pike with Hot Dogs in Open Water?

When it comes to open water fishing with hot dogs, most American anglers will use a slip bobber rig to present their baits, meaning that they will use a bobber, or float, in order to keep the hot dog at the intended fishing depth.

The principle is basically the same; you set the depth by sliding the bobber stop up or down your mainline and then simply cast out your rig.

As you are using a slip bobber (which is sliding on your mainline), the rig will be able to sink down to the right depth, at which it will be kept with the help of the bobber on the surface.

RELATED ARTICLE: What Is a Slip Bobber? (A Helpful Beginner’s Guide)

Once a pike takes the hot dog and takes off with it, your slip bobber will either start to move around or simply get pulled under, giving you a visual bite indication and the signal to strike and set the hook(s).

Pro Tip: If you have a boat, you can also slow troll your slip bobber rigs behind it, which is great if you want to cover more water!

When it comes to leader materials, I can warmly recommend the American Fishing Wire Titanium Leader, which is the perfect wire material if you want to tie your own leaders! It’s very flexible, can be knotted or crimped, and is highly kink-resistant.

Couple this with two size 4-6 treble hooks, and you got yourself an amazing pike leader! You can check out the awesome American Fishing Wire titanium leader on Amazon!

What Is the Best Hot Dog for Pike Fishing?

Surprisingly enough, an overwhelming number of anglers have stated that the cheaper the hot dog, the more pike it catches.

The hot dog that sticks out and seems to have caught the most pike are the Bar-S Brand hot dogs.

But to be totally frank (pun intended), I don’t think the brand or type of hot dog matters all that much.

Instead, fishing with hot dogs during the right time in winter could perhaps make a lot of difference.

Many anglers have reported that hot dogs will work best on late ice when the water has undergone an entire year of predation and baitfish are running thin before spring and the new spawning season.

The pike are probably less picky and all the hungrier this time of year, which then could explain why hot dogs are such a hot bait.

RELATED ARTICLE: Read this article if you want to improve your pike fishing even more! It’s got plenty of really helpful tips and tricks!

Can You Catch Other Fish with Hot Dogs?

When I did my research online, I found plenty of forum and Facebook discussions around this question.

According to the answers I’ve found, anglers have caught other species on hot dogs as well, both targeted and as bonus catches.

Largemouth bass were among the most commonly caught ones, although most of the time, anglers used either only half a hot dog or a piece of it on the hook to catch largemouths.

The same goes for catfish! Smaller pieces of hot dog on the bottom are apparently a very effective and popular bait choice for plenty of catfish anglers in the US.

Some ice anglers have even claimed to have caught crappie and walleye on whole or half a hot dog, but such catches must surely be fairly rare.

So there you have it! Hot dogs are indeed a commonly used bait for pike fishing that actually catches fish. Who would’ve guessed?

So if you are running out of conventional live or deadbaits, why not give the good old dog a try next time you’re out?

And if you don’t happen to catch a pike on them, you can get the grill going and enjoy them yourself.