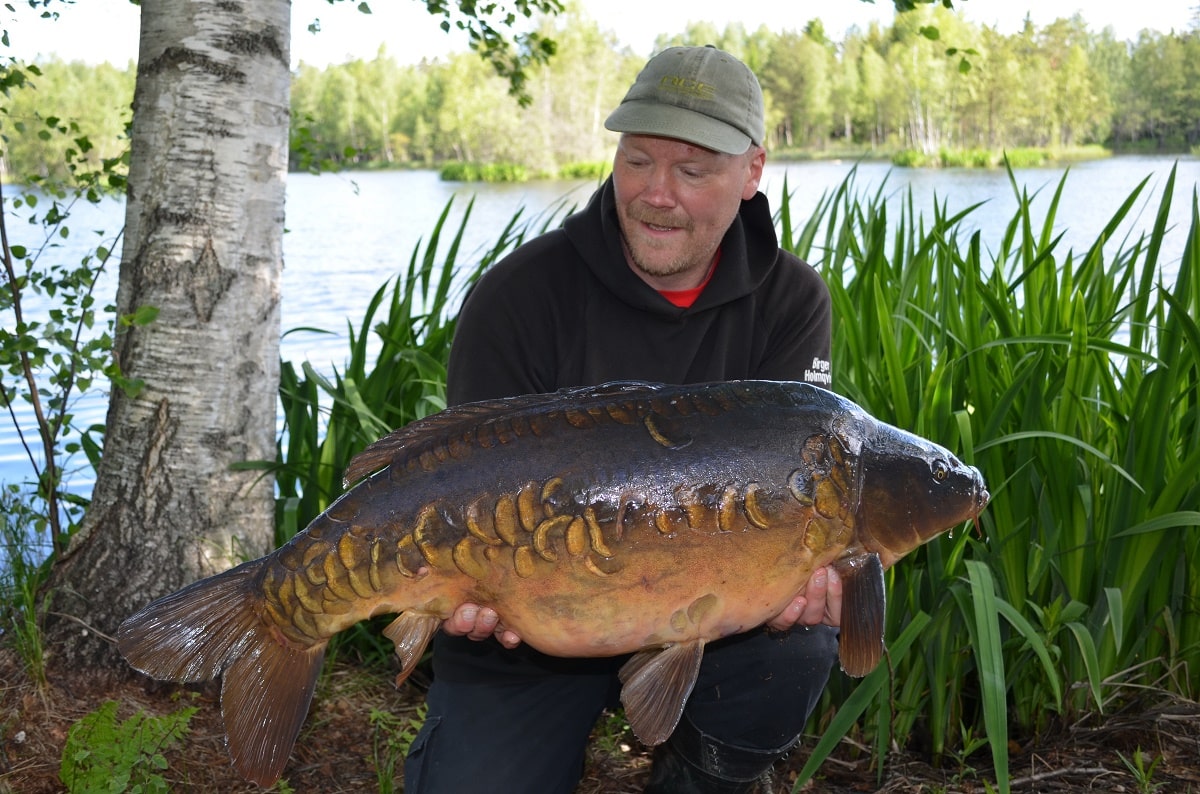 Carp fishing isn’t the first thing that comes to mind when thinking of Sweden or Scandinavia as a whole. But over the last 20 years or so, carp fishing in Sweden has become ever more popular and the Swedish carp have grown considerably. Today, specimens well over 30lb aren’t unusual catches at all and together with the exceptionally beautiful and peaceful Swedish environment, they can transform each and every session into an unforgettable experience.

There are numerous venues in the South of Sweden that hold big carp and many of them can be fished with a conventional fishing license. Some can even be fished for free. So if you ever happen to visit Sweden between April and October, make sure to take advantage of the countries many carp fishing possibilities.

Continue reading this article to get expert tips and recommendations on how to fish for carp in Sweden.

Pro Tip: If you want to read an authentically written book on carp fishing in Sweden that covers many of the lakes described in this article, you should check out the newly published “1000 NIGHTS – MY LIFE AS A CARP ANGLER” by famous Swedish carp fisherman Birger Holmqvist! (Use the code STRIKE50 to get 50SEK (£4) off)

Can You Fish for Carp in Sweden?

It is definitely possible to fish for and catch carp in Sweden. The Southern parts of this long country especially offer plenty of opportunities to catch both plenty of and really big carp. However, it hasn’t always been that way!

Due to the harsh Nordic climate, carp fishing up here in Sweden has long been something only a few anglers used to practice. The harsh winters, the short summers and the relatively slow-growing fish didn’t really appeal to many carp or specimen anglers.

But with the ever-warming climate, things have changed considerably. 20 years ago, a 20lb carp caught in Sweden was considered quite the rare catch. Nowadays, carp of 30lb and more are caught every year and 40+ pounders are getting more and more common as well.

How to Fish for Carp in Sweden?

If you feed them, they’ll come! Baiting larger amounts of boilies and particles is always a good tactic when it comes to carp and Swedish carp fishing is no exception here!

Prebaiting a swim, especially in a venue that you’ve never fished before, can definitely improve your chances of actually getting carp on the mat and so does fishing with quality hookbaits.

When it comes to fishing methods, ledgering is by far the most common and most successful way of catching Swedish carp. All types of known rigs work here in our venues, always depending on the features of the water and bottom structure, of course.

In many venues, fishing the simple hair, pop-up rig or chod rig will get you a long way. In silty venues, the helicopter rig has proven to be highly successful.

When it comes to your actually gear, just fish with what you’d normally use for your carp fishing at home; 3,00-3,50lb rods, bigger baitrunner reels or big pits, 15-18lb mono or 30-40lb braided mainline, 2-5oz leads and some #2-#6 wide gape hooks. You don’t really have to reinvent the wheel here!

What Are The Best Carp Lakes in Sweden?

An idyllic venue located in Western Sweden outside the city of Laholm. This lake is home to some really big carp, with plenty of fish weighing between 20 and 25lb and some really big top dogs of more than 30lb.

Fishing here isn’t super easy, but with the right conditions, you can definitely count on getting at least a few runs during a weekend session.

The lake’s numerous swims are easily accessible and at close distance from the parking lots.

Lilla Tjärby is also home to some pretty big tench, which can be a fun bonus fish to catch.

Open venue, licenses can be bought by joining the Swedish Carp Club. For more information, please send an email to the club: info@svenskakarpklubben.com

A legendary 2-lake-system, located in Skåne in the very south of Sweden, that is home to some of the biggest carp in the South of Sweden! These lakes have been fished since the 80s and are categorized as fairly difficult. In other words, something for the carp angler who seeks a true challenge.

The lakes are rather big and pretty snaggy, which means that using a boat can be a huge advantage. For some swims, it’s even mandatory to use a boat, due to the many snags.

The fish here aren’t easy to catch, also due to the fact that they have so much space to swim around in. But when you hook one of the lakes’ inhabitants, you’re in for a real treat, as most of these carps are extremely well-proportioned and beautiful fish.

This venue, which is located near Karlstad in the middle of Sweden, holds a large number of really big and really beautiful carp. Over the years, the few fishable spots from the shore have produced plenty of fish around 20 to 25lb and a fair number of even bigger ones that go beyond 30lb.

Due to the few number of fishable swims from land, the local anglers have built several platforms that can be reached by boat. If you manage to reach and talk to some of the local guys, it’s sometimes possible to get access to one of these platforms, which makes fishing this lake far easier.

Otherwise, fishing from a boat is a far better alternative, as you’ll be able to reach more swims with ease. That is if you have access to one.

Be prepared for large tackle and long-distance continental-style carp fishing if you want to succeed on this venue, as most of the big fish will be found near the heavy reeds or in the thick patches of lily pads.

Little Lake, as this venue is called, is indeed a rather small lake that nonetheless holds an impressive number of bigger carp. Most fish in here will weigh between 10 and 25lb, which makes this venue fairly easy to fish.

On the other hand, there are also a few heavyweight champions that well exceed the 30lb mark. This mix and the good chances of several runs during a weekend session make this carp lake a really special and fun one to visit.

There are several easily accessible pegs and swims here, as well as several parking lots around the lake.

This rather big lake is located near the big Swedish city of Gothenburg in the western parts of Sweden. This water is fairly urban, which means plenty of dog walkers and joggers around the lake, as well as some swimming and partying on the weekends.

Luckily, there are plenty of quiet pegs to choose between and the overall atmosphere around the lake is very welcoming.

The venue holds plenty of big carp that can weigh well over 30lb. Most carp will however have a weight of 15 to 25lb in here, which makes this carp venue rather easy to fish, also because there aren’t many snags to be found here and most fish are caught in open water.

Putting out a lot of food will most often lead you to a successful session, as the fish like to feed often and a lot in this lake.

In order to fish this venue, you will have to purchase a so-called “yellow card”, which is an annual fishing license that costs 400SEK (£34). This card can be purchased here.

Most carp lakes in Sweden can ar located in the very south or west of the country, but there are quite a few along the lower east coast as well. Stora Karsgöl is one of them and a highly picturesque one at that!

Located in the deep forests of the eastern region of Småland, this venue holds an astonishing number of bigger carp between 15 and 25lb and has a few really huge specimens over 30lb in it.

The venue is rather big and mostly free of snags, which, in combination with the large amount of carp, makes it a fairly easy venue to fish in. Given that you can get the carp going, that is!

They react well to large baiting campaigns and if the conditions are right, you can have many runs during a weekend session.

Most carp here will bite during the light hours of the day, which makes sleeping at night fairly easy (do not sleep too tight though, you never know).

A limited amount of guest fishing licenses can be obtained by emailing the venue’s bailiff Palle Sköldblom: pallebrax@hotmail.com

As mentioned above, the famous and very skilled Swedish carp angler Birger Holmqvist has recently published his book “1000 nights – My Life as a Carp Angler”. The original version in Swedish was a big hit in the Swedish fishing community, and hence, Birger decided to translate his work into English as well.

The book includes plenty of Swedish carp fishing adventures that cover many of the above-mentioned lakes and also several fishing tales from some of the most popular carp venues in Europe (including well-known venues such as Rainbow Lake, Euro Aqua, or the River Ebro).

Right now, everyone who pre-orders a copy also gets the chance to win a fully-guided carp fishing trip with Birger. And that, my friends, will most likely be one of the most epic carp adventures you can imagine! That’s for sure!

Check out more info on the book and how to enter the competition here and make sure to enter the promo code STRIKE50 to get 50SEK (£4) off when pre-ordering the book.

And don’t hesitate to contact Birger directly, should you have any further questions about his book, the competition, or on Swedish carp fishing in general.

Birger was also kind enough to provide me with his expert tips and experiences on the carp venues that are mentioned in this article, as well as with a multitude of carp pictures.

When to Fish for Carp in Sweden?

The best time of year to fish for carp in Sweden is between April and October, at least in the Southern parts of the country.

Winters are off for the most part, as we still tend to get a fair amount of snow and sub-zero temperatures, which makes most carp venues hard to fish to completely unfishable during the winter months.

Come spring, the carp will get more and more active, given that there’s no more ice on the lakes. May and June can be absolutely fantastic right up until the spawning season, which tends to be somewhere around the mid to end of June in many waters.

After the hot (but short) summer in July, August, September and October are probably the best months for Swedish carp fishing, when the carp feed plenty to get ready for the upcoming winter.

How Big Is the Swedish Record Carp?

The biggest carp ever caught in Sweden is a massive fish of 71lb 5oz that was caught in 2017 by Swedish angler Anders Lundmark in a syndicate venue called Stubbetorpssjön, located in the very Southern parts of Sweden.

All images courtesy of Birger Holmqvist

Specimen Tench Fishing (How to Catch Really Big Tench)
← Previous
White Bass vs. White Perch (How to Tell Them Apart)
Next →
Click here to cancel reply.

Hi, I'm Max. I have been a fisherman for over 20 years and I just could not imagine a life without this wonderful hobby! To me, fishing is a passion and a lifestyle. The joy of the catch, the bait, the tackle and the outdoors in general is what Strike and Catch is all about.