Common Carp and Mirror Carp (How Are They Different?) 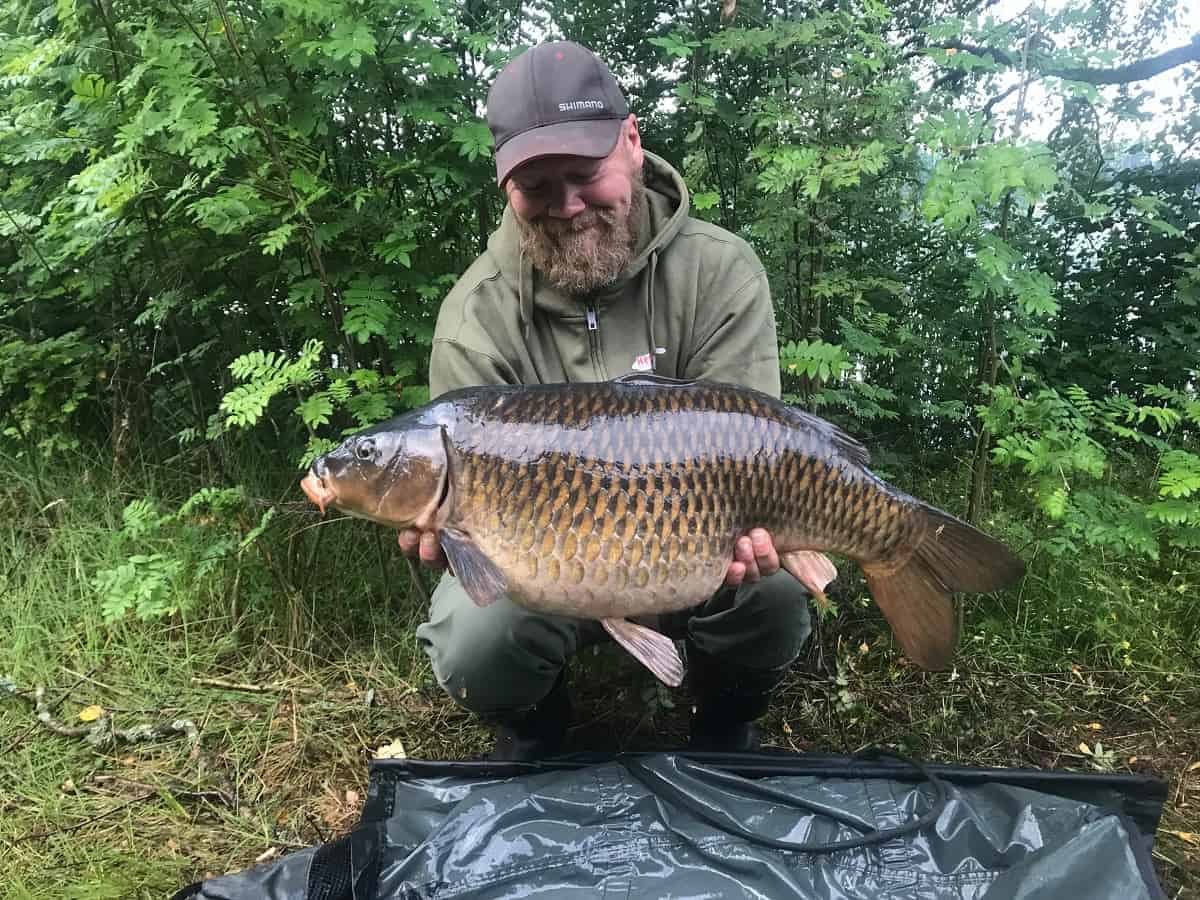 During my latest carp fishing trip, I started wondering about all the differences between common carp and mirror carp. There are actually quite simple ways to tell them apart, and so, the idea for this article was born.

Common carp are fully covered by scales, whilst mirror carp have irregular patches of scales all over their body. Mirror carp are usually deeper than commons. Additionally, common carp usually fight harder than mirror carp do when they have been hooked.

If you want to know more ways of how to tell the difference between common and mirror carp, keep reading this article for facts and tips. This way, you will always know what type of carp you have caught when fishing!

Pro Tip: If you’re new to carp fishing and need helpful tips and tricks, check out this comprehensive carp fishing manual on Amazon.

What Is the Difference Between Common Carp and Mirror Carp?

When you are out fishing for carp, this table of common and mirror carp features will help you to differentiate between the two easily:

Visually, it is relatively easy to tell the difference between a common carp and a mirror carp. Commons are covered by regular patterns of scales; their entire body is scaly.

Mirrors can have all kinds of irregular patterns and patches of scales all over their body; their scale pattern is extremely individual from fish to fish.

As mirror carp are so unique, it is very easy to recognize individual fish, which is the main reason why so many mirror carp have actual names.

The carp’s body size also reveals whether you are looking at a common or a mirror carp. Common carp, which are the true, original type of carp, are rather long and lean. They are most commonly shaped like a torpedo.

Mirror carp, on the other hand, are usually very deep and round fish. They can be somewhat shorter than common carp but have higher backs and bigger bellies.

Now, we leave the more obvious, visual features of carp behind us and take a look at a more hidden way of telling them apart. Commons and mirrors fight very differently when they have been hooked!

Due to their wild nature, common carp will give you a hell of a fight every time you have one on. They are one of the strongest, and most ill-tempered, freshwater species around and they do not give up easily.

Pro Tip: In order to be able to fully control carp when fishing for them, you’ll need a strong enough rod in order to get the upper hand. I recommend using 12ft 3lb rods with a strong backbone. Those will enable you to land any carp, no matter how strong and wild it is. You can check out my favorite carp rods on Amazon here.

Especially when the first round is coming to an end and you have managed to get the fish close to your net, it will suddenly gather new strength and literally explode into the depths of the water again.

You can actually get quite the muscle ache in your arms from fighting a bigger common carp. In that respect, carp fishing can most definitely be called a sport!

On the contrary, mirror carp are often much slower and calmer in their way of fighting. Of course, they will also use all their strength, which is quite considerable as well, but they will almost always do it in a more controlled way.

If a really big common can feel like a freaked out pit pull on your line, a big mirror will feel more like a locomotive, trying to stream off slowly, sluggishly, and heavily, away from you.

So, their strength and fighting behavior can differ quite a lot and it is this difference that can allow you to already know what type of carp you have hooked, long before you land it. In other words, this secret will make you a carp specialist on the bank!

RELATED READING: Check out this article if you want to know all the differences between carp and the American buffalo fish

Where Do Carp Originate From?

Carp originally come from East Asia, where they have been a common food fish for over 2.000 years. In Europe, they were first introduced around the 12th century, and sometime during the 16th century, they were brought to Great Britain.

It would take another 150 years or so before European immigrants would introduce carp in the newly established colonies of North America.

“The Carp is the queen of rivers; a stately, a good, and a very subtle fish; that was not at first bred, nor hath been long in England, but is now naturalized.”

Common carp quickly made their way into many lakes and rivers all over Europe, where they remain to this day. In many countries, monks and poorer farmers started to breed carp in small ponds.

It was here that the mirror carp slowly started to develop. Mirrors are actually a slight genetic mutation of the common carp. Otherwise, they share the exact same DNA and are not two different species of fish.

Most likely, the monks and farmers figured out a way to slowly decrease the number of scales on the common carp, in order to have an easier time preparing them for the table.

Yes, carp were considered a food source back in those days (and still are in many countries around the world).

In England, the carp turned into a game fish around 1880 and since then, the Englishmen are crazy about their carp fishing.

Why are They Called Common Carp and Mirror Carp?

Common carp are simply what the name suggests; the original, common, and wild type of the species. The way a common carp looks has remained the same for thousands of years.

From Asia, it has spread to Europe, then North America, Australia, and even parts of the Middle East and Africa.

Mirror carp are geographically somewhat more home in Europe, where they were bred, and North America. They got their name from the fact that their round, silvery and shiny fins sometimes resemble small mirrors.

Is It Easier to Catch Common Carp or Mirror Carp?

Both types of carp seem to be equally easy, or, as in most cases, equally hard to catch. They often share the same spots and areas in a venue and seem to have virtually the same feeding patterns.

Hence, catching a mirror or a common is more like playing the lottery than undertaking a really targeted effort.

Some venues are stocked with more mirrors than commons, which then, naturally, makes them easier to catch in those waters.

On the contrary, many carp waters in e.g. Italy or Spain usually hold many more commons than mirrors, which results in more caught common carp in those regions.

Find out what type of carp is more common in your local waters and challenge yourself to catch the one that is less common. That can give you an extra kick when carp fishing.

RELATED READING: Read this article and read up on all the different types of carp there are out there in the world

What Is the Biggest Common Carp Ever Caught?

The current common carp world record is held by Englishman Terry Harbert, who caught an enormous fish of 101 lbs 6 oz in the French carp venue Lake Serene in 2019.

Lake Serene is a 16 acres gravel pit in the heart of the Champagne region and a very popular destination for carp anglers from all over the globe.

I can imagine that quite a few regional bottles were opened after this catch! Terry Harbert was the fifth Englishman ever to have caught a carp over 100 lbs. Below, you can watch a short YouTube clip with a few images of the world record common.

What Is the Biggest Mirror Carp Ever Caught?

In November of 2018, Dutchman Michel Schoenmakers caught the world’s biggest mirror carp at the Hungarian venue Euro Aqua. This fish weighed in at an unbelievable 112 lbs 14 oz and crushed the previous world record by almost 5 lbs.

Euro Aqua is known for holding gigantic carp and the venue has produced world record fish several times. Below, you can watch actual live footage of the record mirror carp.

With that said, I must confess that I am not the biggest fan of such carp fisheries, as they are known for feeding their fish enormous amounts of food, in order for them to grow faster and bigger.

So, the challenge and reward are somewhat suffering from that, at least in my opinion.

Regardless, these are some monster carp and naturally grown or not, it shows how big they can become.