A Complete Guide to Crappie Fishing in Texas 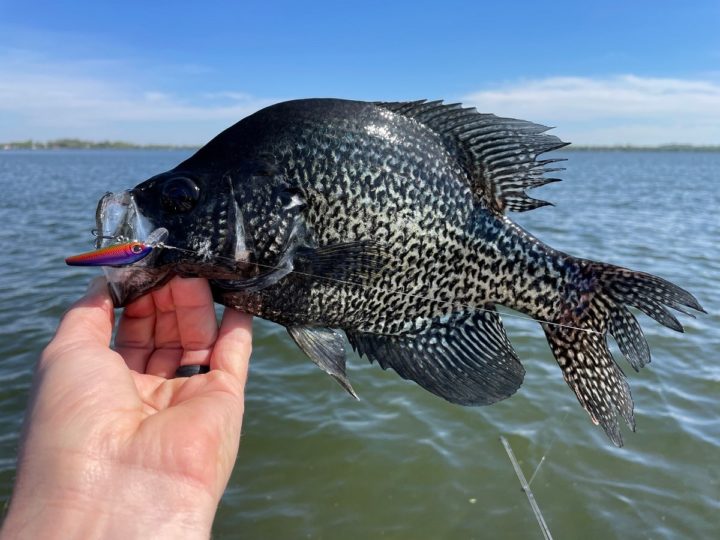 With its numerous lakes and reservoirs, Texas offers some of the country’s best crappie fishing.

Here, you can target slabs all year round and never have to worry about chilly air and water temperatures during winter.

In other words, Texas can be described as a regular crappie paradise!

If you want to read up on some of Texas’ very best crappie waters or wonder about regulations, bag limits, fishing guides, and the best times to target Texas crappie, all you have to do is keep reading.

PRO TIP: Need a guide for your next crappie adventure in Texas? You can find some of the best right here:

Where Is the Best Crappie Fishing in Texas?

Texas has a bunch of productive crappie fisheries, and it’s not difficult to both fill your bag limit and catch the occasional monster crappie in these waters.

Obviously, it would be impossible to list them all (even though most of them would deserve a section in this state guide, so I narrowed it down to five of the very best crappie lakes in Texas.

They offer excellent fishing opportunities, are highly popular among both local and out-of-state anglers, and have great accessibility (from shore and boat).

Let’s check them out:

Lewisville Lake is one of Texas’ most productive and famous crappie waters. The fishing here is good year-round, but most of the crappie action can be expected during the winter and spring.

It is conviniently located just north of Dallas and Fort Worth, making it an easily accessible lake if you’re staying in the area.

On good days, filling your bag limit won’t be much of a challenge, and with a bit of luck, you can even land some real trophy slabs in Lewisville!

Of course, all this cover can also make fishing here a little challenging, so booking a knowledgeable crappie guide can be a smart idea on this water.

Located east of Dallas, Lake Fork is another excellent crappie lake. In fact, this water has been consistently ranked among the top 5 crappie lakes in the country!

The crappie here are both abundant and reach impressive sizes, making this reservoir one of Texas’ best slab fisheries.

Stick to the lake’s numerous standing timber spots and bridges and you shall never go empty-handed, as these are prime spots for both black and white crappie here.

And unlike other waters, Lake Fork offers excellent fishing for crappie during both spring and summer, which further adds to its immense popularity.

If you are anywhere near Austin, make sure to visit Granger lake and its vast population of white crappie.

This smaller reservoir has excellent accessibility, making it a very popular choice for bank anglers.

Of course, you can also head out on a boat and enjoy the breathtaking scenery around the lake.

PRO TIP: The Texas Parks and Wildlife Department has placed brush piles throughout Granger Lake. These have turned into regular crappie hot spots over the years. Find them, and you’ll find the fish!

Lake Athens is yet another productive, you guessed it, crappie reservoir just east of Athens.

While its crappie population is not the largest, Lake Athens has consistently produced big fish over the last few years, making it a popular destination for trophy hunters.

Still, if you manage to find the right spots, you can easily fill your daily limit on this lake as well!

Apart from its great crappie fishing opportunities, Lake Athens is also an excellent largemouth and sunfish fishery, which makes it an interesting and versatile water.

Big Sam is Texas’ largest freshwater reservoir and a great summer and early fall crappie destination in the deep east of the state.

There’s plenty of room and plenty of cover to be found here, and between May and October, most anglers will target crappie in somewhat deeper waters of 10 to 30 feet here.

Look for the many underwater brush piles in the Sam Rayburn Reservoir, and you’ll be sure to locate its many crappies!

What Time of Year Is Best for Crappie Fishing in Texas?

While it is possible to target Texas crappie all year long, the best time to fish for them is undoubtedly late winter to late spring.

During February and April (and sometimes even May), the fish gather in the warmer shallows of the lakes they inhabit to prepare themselves for the upcoming spawning season.

Here, they will often be found near structure or heavy vegetation. And as they tend to gather in larger groups, it is now that you can locate them pretty easily and quickly.

Keep to the shallows and try out different areas and spots. If you manage to catch one crappie, chances are that you’ll be able to catch several more!

When Do Crappie Spawn in Texas?

In most years, the crappie in Texas will spawn sometime between mid-March and mid-April, which is usually when water temperatures go above 60F.

However, weather patterns during winter and spring can vary, and so will the crappie spawn down in Texas.

After very warm winters, they might start to spawn as early as late February or early March.

On the other hand, if March and April are exceptionally chilly, then the crappie spawn might instead take place in late April or early May.

The easiest way to find out if the spawn is near is to check the water temperature in the shallows of the lake you’re fishing in.

If it’s somewhere between 60 and 68F, you can be sure that the fish will be about to spawn!

RELATED ARTICLE: Learn even more facts about the crappie spawn via this article!

If you’ve never fished the many lakes of Texas, heading out together with a skilled crappie guide can be a very good idea.

Guides will often show you how to catch crappie in their local waters, give you valuable tips and tricks about gear, baits, spots, weather conditions, etc., and make sure you’ll catch a ton of crappies during your trip.

The following crappie guides are some of the very best in all of Texas. They have a lot of expert knowledge, are extremely service-minded, and offer trips for very reasonable prices.

So if you are looking for a guided crappie tour in Texas, you can check them out right now:

What Lake in Texas Has the Biggest Crappie?

If you are searching for big crappie in Texas, you should seek out one of its big lakes and reservoirs.

Those enormous water bodies have both the necessary amount of space and forage to produce large-grown crappie populations.

Some of the most popular ones include:

The Sam Rayburn Reservoir is by most Texan anglers considered to be the most reliable crappie fishery, as the lake has a very large and healthy population of crappie.

There is also plenty of spawning grounds to be found, making fishing here a little simpler and often much more productive than on other lakes during the time of spawning.

Abilene’s Daniel is often mentioned in combination with large crappies, as the lake is a solid producer of 10 to 15-inch fish.

What Is the Texas State Record for Crappie?

The Texas white and black crappie state records don’t come from Sam Rayburn but were caught in two other giant lake reservoirs.

Both fish can be considered regular monster slabs and are proof of Texas’ excellent crappie fisheries.

Texas’ biggest white crappie ever caught is an enormous fish of 4.56lb that was caught on Navarro Mills Reservoir back in 1968.

The state’s biggest ever black crappie is a fish that weighed in at 4lb. That slab was caught on the Toledo Bend Reservoir in 2002.

You can find a lot of helpful information about current crappie fishing reports in Texas.

The best and most up-to-date source would most likely be Texas Parks and Wildlife’s weekly freshwater fishing reports.

Here, you can find weekly updates about many popular Texas fishing spots for both rivers and lakes.

Various online forums and communities can also be a good address for Texas crappie reports.

A few very active and helpful ones include the following:

How to Fish for Crappie in Texas?

All the standard methods and baits will generally catch you Texas crappie. Those would include jigging and slow trolling, with both live minnows, crappie jigs, or micro crankbaits.

As always, you should keep your gear and tackle as light as possible, as the crappie is a cautious creature, and you often have to make sure that you can detect even the tiniest nibble.

If you can, you should definitely use live baits, as these are, by far, the best baits for crappie in my opinion.

Put a small to medium-sized minnow on a simple slip bobber rig, and you’re golden!

Try out classics like the Marabou or hair jig if you prefer artificial lures.

If you’re targeting really big crappie, you should try to slow-troll smaller crankbaits along the grass lines in the shallows. This method tends to produce the most slabs!

What Is the Bag Limit for Crappie in Texas?

The daily bag limit for crappie in Texas is 25 fish. Additionally, there is also a statewide minimum length of 10 inches.

Some of the reservoirs that border neighboring states can have higher bag limits, while others can have seasonal regulations prohibiting the release of caught fish.

The latter is often the case on deep lakes, where the fish spend the colder winter months in very deep water.

Here, the culling of the catch may be prohibited, as the released crappie will often not survive due to the rapidly decreasing water pressure and the drastic difference in water temperature.

Please be sure to check the regulations of the respective water should you plan on fishing on one of them.

Do You Need a License to Fish for Crappie in Texas?

All resident and non-resident anglers must purchase a valid fishing license to fish in any water in the state of Texas.

Exceptions for non-residents include:

Crappie Fishing in Florida (Everything You Need to Know)
← Previous
Bass Fishing in Texas (Largemouth, Smallmouth, Striped)
Next →