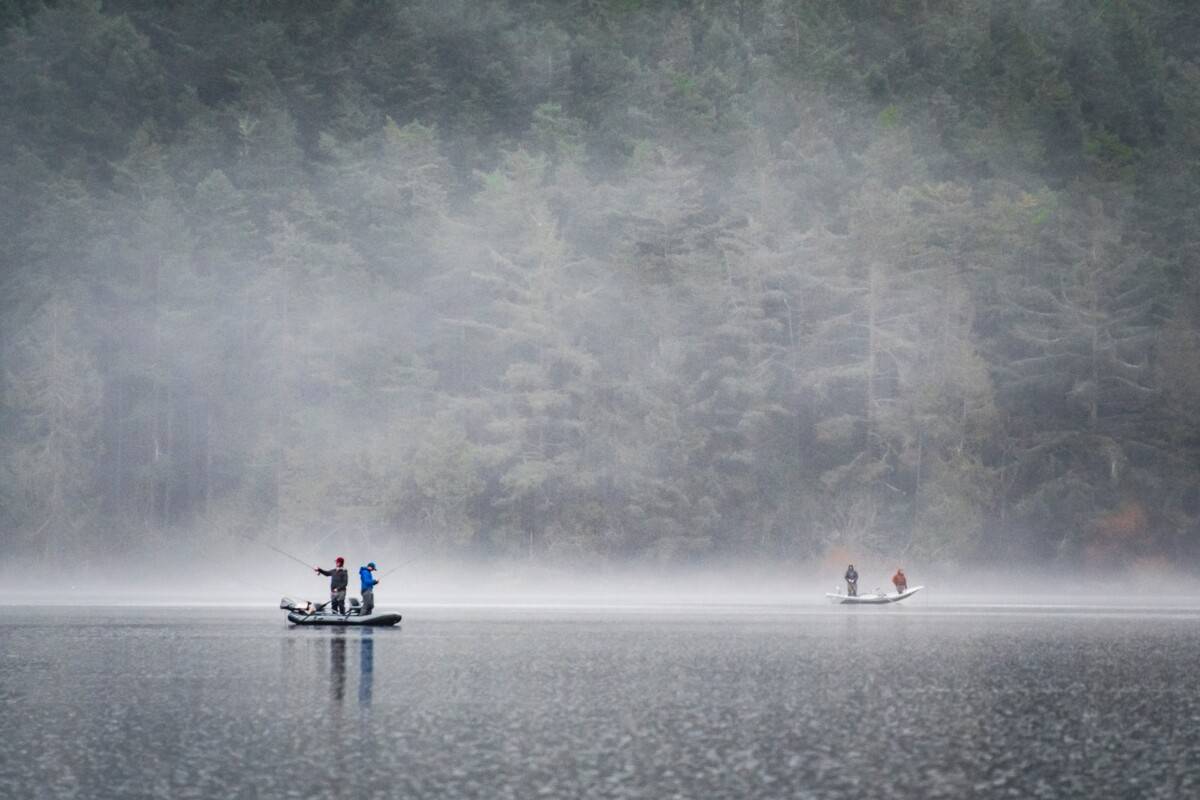 Right now, it is pouring outside and I am sitting at home with a hot cup of tea, remembering all the rainy fishing sessions I have had over the years. With all these sessions in mind, do fish bite in the rain?

Fish do bite when it rains, but their activity is generally lower during rain. Rain both oxygenates and colors the water, which are two very positive aspects when it comes to fishing, but the fish seem to need time to adjust to the sudden shift. That is why you should focus on fishing right after a rainfall instead!

You will often hear that fish bite well when it rains and that it is then you should be heading out to the water. We all know the stereotypical fisherman in a yellow rain poncho on the back, don’t we? But you can both stay relatively dry and optimize your fishing immensely by ignoring these common beliefs. Read on to find out why, and when you should be fishing instead.

How Do Fish Behave When It Rains?

Rain is essential to our water systems and to the fish that inhabit them. It makes rivers flow, gives oxygen to the water when it’s hot during summer, can flush food into the water (worms, insects, etc), and makes the water murky and darker. Murkier water means that less light can penetrate it and that it becomes darker, which often results in increased activity of both predator- and prey fish.

All in all, rain is extremely good news for fishermen, but there is a catch! It takes a certain time for fish to adjust to the changes that the rain brings with it. And so, during rain, fishing is often rather bad!

Of course, there are exceptions to that rule, but most fishermen will tell you that they almost never catch fish when it is pouring. That is due to the fact that rain can reverse the fish’s activity rhythm. Rainfall can have a drastic impact on aquatic environments and often leads to:

All these factors can alter the fish’s normal behavioral patterns, and the most drastic of these is of course the feeding behavior. So, if the fish reverse their normal daily activity, which is swimming around and feeding, the logical conclusion is that they become rather inactive and do not bite all that much when it rains.

It is important to state that lighter drizzles do not seem to have the same impact on the fish, as opposed to heavy rainfall. Instead, they can actually improve activity and feeding! This fact is closely linked to the intensity of the weather pattern; the heavier and violent the rain, the more drastic and rapid the effects on the fish will be.

Do Fish Bite Better Before It Rains?

The closer the rainfall or rainstorm is approaching, the worse the fishing tends to get. This has to do with the change in air pressure, air temperature, as well as an increasing winds. The weather is becoming more unstable, and so the conditions for the fish are simply getting less and less favorable, especially when it gets colder and windy rather quickly.

Similar to you wanting to get home and quit your fishing session before it rains, so do the fish seem to suddenly end their feeding and “seek shelter” via being inactive.

But again, if the bad weather front is approaching slowly, or if it is changing direction and is only passing by your area, you should totally continue fishing. In this case, the weather’s impact on the fish’s behavior is much less drastic and they will most likely continue to feed and bite.

Generally, if you use your common sense and keep and eye on how the weather is developing, you will know when to stay and when to quit.

I know that it can be very tempting to remain fishing, even when you know for certain that the weather is going to be bad. And that’s totally fine! Just know that you probably only will get wet and that you are certainly not missing out on the fishing action during a rain. If there is an approaching rain front heading your way, it’s suddenly getting colder, windier and the fish stop biting, it’s time to break and head home.

Do Fish Bite Better After It Has Rained?

When the rain front has passed and the weather is staring to stabilize again, that’s when you want to be on the bank! The fishing can be absolutely fantastic after a rainfall. As a bonus, you and your gear get to stay dry. Wet clothes, shoes and fishing gear are a pain to dry while fishing. Once the rain has stopped, you don’t want to be focusing drying your stuff and trying not to freeze while doing it. Instead, you want to be focusing on catching fish!

Similar to a steadily decreasing activity before a rain front, the fish will increase their activity after it has rained! Now, the conditions are suddenly reversed; the wind disappears, it gets warmer, air pressure is once again stable, and, most importantly, the water has gotten more oxygen.

The increased level of oxygen in the water is especially favorable during summer, when the water temperature is very high and oxygen levels are low. Fish get a literal boost from cold and fresh rainwater and can start to feed madly after a good shower.

How Should You Fish After Rain?

As the fish are now much more active, you can have an easier time catching them. Often, they will not be as picky as they can be under other circumstances. The water is now murkier, which means that bigger fish can move more freely, as they tend to spook less and find more food.

The increased levels of oxygen also means that the fish will be hungrier, so don’t hold back on chumming and pre-baiting when saltwater fishing for tuna or sharks, or freshwater fishing for carp or catfish.

As the water in summer is now cooler near the surface in lakes, predators, such as bass, pike or walleye/zander will be preying exactly there! Try using surface lures (such as poppers and jerkbaits) in order to catch them. There is nothing better than a visible surface bite from a large predator, is there!

When You Experience a Feeding Frenzy After Rain – Keep Fishing!

Sometimes, you can literally feel the increase in fish activity after the rain. Every cast seems to result in a bite, there are jumping, hunting or rolling fish all over the place, and everything just comes together nicely. You simply can’t fish fast enough, because of all the bites you are getting. This is what’s commonly referred to as a feeding frenzy.

If you experience a fishing frenzy, you should definitely continue fishing. These frenzies can last for hours and you can really have the fishing session of your life!

And that’s the best advice this article can give you: optimize your time and focus on the best possible outcome! A fisherman’s time is often limited; job, family, school…lots of things can get in the way of a fishing trip, and they most commonly will more often than not.

Why would you waste your precious fishing time on rainy session? Once again, when you get that feeling that pulls you out to the water, weather patterns are often disregarded, I know the feeling all too well! But many times, you arrive to the venue, start fishing and immediately regret your somewhat hasty decision.

So, rather than the heading out 5 times in unstable and uncertain weather conditions, and risking not catching anything, wait for those favorable conditions, and then your strike! It may only be 1 or 2 sessions, but they are likely to result in many more bites, and hence, much more fun!

What reel you should be using for your tench fishing depends entirely on the way you are targeting them, as float fishing, feeder fishing, and a bolt rig or method feeder setup all require different...

As float fishing and ledgering for tench demand different rod models, I decided to write this helpful in-depth guide on the best tench fishing rods in order to assist you in choosing the perfect rod...