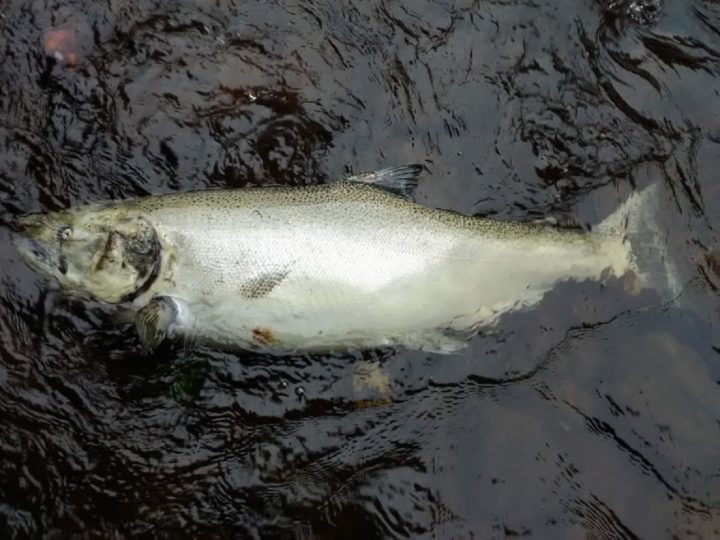 Salmon stick out in the fish world when it comes to their life cycle and spawning behavior. Many people have heard that salmon die after spawning, but most of them wonder if that is really true. To give you a 100% correct answer, and because I find this topic extremely fascinating, I have decided to write this article!

All Pacific salmon and a majority of Atlantic salmon die after they have spawned. They reduce their feeding activity and use up all their energy when swimming upstream against the strong current. Once they are done spawning, their bodies keep deteriorating until death.

Keep reading this article if you want to know more about salmon spawning, why most of them only spawn once, and if you can catch salmon during their spawning season.

PRO TIP: North America is home to a huge variety of both trout and salmon. In fact, the continent is home to more than 70 types of salmonids! If you want to read up on them, check out this complete and illustrated guide on Amazon.

Why Do Salmon Die After They Have Spawned?

Salmon spawn in river systems with a very strong current, as their fast-flowing freshwater provides a lot of oxygen for their young. During their way upstream, the salmon keep their feeding activity to a bare minimum and burn through all of their bodily energy reserves in order to make it to the spawning grounds.

Once the fish reach the spawning grounds, they will use their remaining energy to spawn. After the act of spawning is done, the salmon’s body will deteriorate at a fast rate and eventually shut down completely.

This epic journey is called the salmon run.

The salmon (Salmonidae) is a very particular type of fish. They are born in freshwater, spend most of their adult lives in the sea, and then return to their freshwater birthplaces to spawn and die. It’s the ultimate sacrifice, you could say!

This type of behavior is extremely rare among fish and can only be found in a few species! It is called semelparity, which is a truly extreme mode of reproduction.

Semelparous organisms, such as the Pacific salmon types, put all available resources (energy) into maximizing reproduction, at the expense of their own future lives.

So, quite literally speaking, salmon die to create new life. It really is such an interesting topic!

The process of semelparity in salmon has evolved over millions of years and resulted in a few highly fascinating aspects of the salmon’s reproductive cycle.

One such is the fact that their extremely high post-spawn mortality rate (which is close to 100% in the 5 main Pacific salmon species and around 90 to 95% in Atlantic salmon) has resulted in a relatively high juvenile survivorship.

To ensure that this is inf act so, the female salmon’s evolution has led to an increased number and size of eggs, which hence have a higher chance of survival.

The higher rate of juvenile survivorship can also be explained by the salmon’s choice of river, which, as mentioned above, are usually fast-flowing water systems that provide the eggs and younglings with a lot of oxygen.

Another evolutionary aspect of the salmon’s semelparity is the programmed deterioration (senescence) of their internal organs.

So, I don’t think I exaggerate when I state that the salmon’s spawning journey is the ultimate sacrifice and a homage to life!

PRO TIP: Want to learn even more about the amazing life cycle of the salmon? Then check out this interesting and well-written book on Amazon.

How Long Do Salmon Live After Spawning?

Some post-spawn Pacific salmon will die immediately after the act of spawning is completed, while others can survive for days or even weeks before their bodies finally give up on them.

The length of their survival is based on a variety of factors that can include the following:

Every individual specimen will have its own death clock. For some salmon, it’ll tick extremely fast, for others, it will tick much slower.

The question is if a fast death isn’t the one to prefer, considering that the salmon go through an immense process of physical deterioration.

RELATED ARTICLE: Make sure to also read this article if you want to know when salmon are spawning

Why Are Salmon Called Zombie Fish?

During the salmon run, their bodies virtually start to eat themselves up, as they are burning through so much of their bodies’ energy reserves. Additionally, the deteriorating salmon actually start to decay alive, making them appear somewhat zombie-like.

Comically enough, the salmon’s spooky appearance coincides with the time around Halloween, as most salmon will be done spawning during the month of October.

So, if you’re out fishing for salmon on a river in an already sinister-looking fall environment, no one will blame you if you catch a zombie salmon and get scared by it!

RELATED ARTICLE: If you want to see even scarier images of zombie salmon and read up on some interesting facts about salmon teeth, make sure to also check out this article!

Can You Catch Zombie Salmon?

While not really being in a feeding mode, zombie salmon will still take the occasional fly or lure the opportunity presents itself.

Generally speaking, you should always prioritize pre-spawn fish, as they have both more energy and often a somewhat greater appetite than post-spawn, or zombie salmon. Hence, the chance of catching salmon before they have spawned can actually be better than during the post-spawn period.

Salmon that haven’t really started their process of deterioration and zombification will also make for much better food fish!

Author’s Note: I must say that it is extremely cool to use the term zombification when writing about salmon! It’s usually only something that you hear or read about in horror movies or novels! Just on a side note.

What Happens To Salmon After They Have Died?

When the spawning is finished and the fish start to die, the dead salmon will remain in the river, either floating downstream or settling on the river bed.

Here, yet another fascinating natural phenomenon will take care of their carcasses; as their bodies decompose, they actually add highly valuable nutrients to the water, which, in turn, also bring life to the river system.

Interestingly, studies in Alaska have found that the nutrients provided by the decomposing salmon feed up to 137 species of microbes, stream invertebrates, mammals, and birds.

As juvenile salmon, which dwell in the river systems for some time until they are ready for the ocean, feed on a lot of stream invertebrates (such as crayfish, worms, leeches, snails, clams, and mussels), this can be seen as yet another semelparous aspect of the salmon’s life cycle.

Even after death, they still care for their young!

PRO TIP: You can check out the visual summary of this salmon article in the related web story here!

Do All Salmon Die After Spawning?

Virtually all Pacific types of salmon (including king, pink, sockeye, chum, and coho) and most of the Atlantic salmon die after they have spawned.

When it comes to Atlantic salmon, the numbers aren’t exact, as different populations can have different survival rates, based on their genetics and the type of river environment they spawn in.

Some references suggest a mere 4-5% that survive the ordeal of spawning, while others state a survival rate of around 10%.

However, I know of several rivers in England, Scotland, Wales, and Scandinavia that seem to have an even higher rate of survival. Here, an estimated 15 to 20% of the Atlantic salmon survive spawning and continue to live.

But once again, these are mere estimates that differ from year to year and from river to river!

RELATED ARTICLE: Want to know why salmon have to swim upstream in order to spawn? Then make sure to also check out this article!

Do Salmon Return to the Ocean After Spawning?

The percentage of Atlantic salmon that do survive the spawning will eventually find their way downstream again and return to their hunting grounds in the ocean.

These fish, which are commonly called kelts, will spend a, for salmon, fairly long period of time in the river before returning to the sea, as they need time to recover from the salmon run and to gain back their lost weight.

Kelts can lose up to half of their original bodyweight that they possessed when entering the river, which is why these salmon will appear very thin when you catch them.

They can dwell in freshwater for more than 6 months and are commonly caught in the rivers of Europe and the British Isles between January and April.

Once they have gained back all of their strength, they will reenter their saltwater territories and, hopefully, return for yet another salmon run the following year.

It is, however, unclear if kelts manage to spawn more than two times.

RELATED ARTICLE: How Many Miles Do Salmon Migrate? (In Salt and Freshwater)

Can You Eat Salmon After They Have Spawned?

While you can technically eat post-spawn salmon, their deteriorated and exhausted state means that their meat is of very poor quality and that they do not taste very good.

Additionally, as many fish already enter a state of decay, eating post-spawn salmon can actually be hazardous to your health.

Their still alive bodies can harbor both parasitic worms, fungi, and different types of bacteria, which makes them fairly unsafe to consume.

My advice is to practice catch and release with those zombie fish and let the river take care of them! You’ll do yourself, and mother nature, a big favor!

RELATED ARTICLE: Make sure to read this article on the interesting topic of zombie salmon!

Salmon Teeth (Facts and Pictures of All Types of Salmon)
← Previous
When Do Salmon Spawn? (Interesting Fish Facts)
Next →