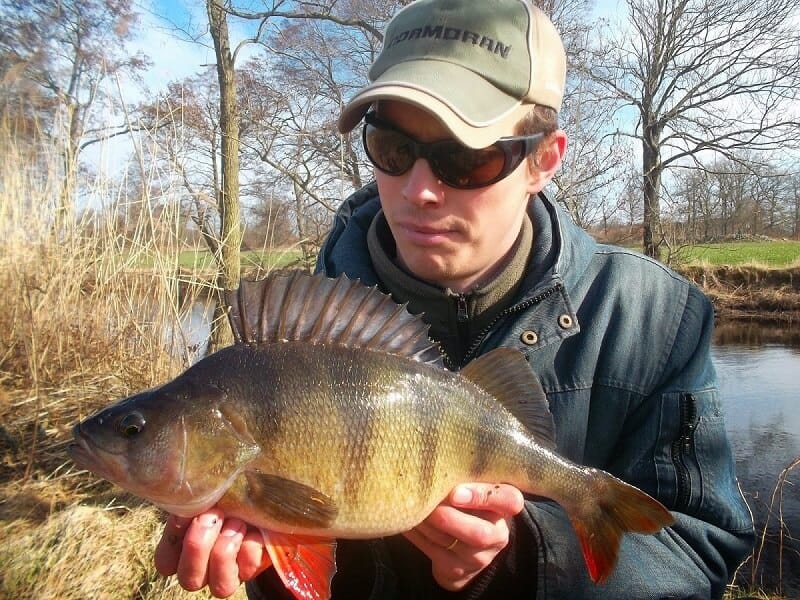 As I love fishing for perch, I have always wondered about the difference between the European perch and the North American yellow perch. So I did some research and wrote this species article.

While both European and yellow perch have rather similar appearances, they are nonetheless two different species of the genus Perca. The biggest difference between the two fish is their size, as Euro perch are much bigger than yellow perch.

Keep reading this article and find out everything there is to know about the topic of European perch vs yellow perch.

Pro Tip: Need expert tips on how to catch yellow perch and other panfish? Then check out this helpful and comprehensive guide on Amazon right now!

What Are the Differences Between European Perch and Yellow Perch?

The Euro perch is both considerably heavier and longer than its North American cousin. Other major differences include body coloration and, of course, their geographical distribution.

A fully grown Euro perch will weigh a lot more than an adult yellow perch. The difference is in fact several pounds, which is rather substantial.

On average, an adult European perch will weigh somewhere between 1.5 and 3lb and can reach a maximum weight of more than 6lb.

Also when it comes to body length, the European perch outgrows its American cousin by quite a lot. In fact, the Euro perch can outgrow the yellow perch by several inches.

The maximum lengths of the two species vary quite a bit as well, as the Euro perch can reach a record length of a little over 25 inches, whilst the yellow perch’s maximum length is around 20 inches.

The differences in coloration are more subtle, but still distinctive enough to tell them apart, in most cases.

Most commonly, the Euro perch will have a much darker body coloration that is ranging from olive green, to dark green, and sometimes even brownish with a back that can be pitch black.

On the other hand, as its name suggests, the yellow perch will have a much lighter, golden-yellowish, or sometimes also a golden-brownish body coloration that is often somewhat pale.

As is the case with the main body coloration, so do the species’ fins differ as well, although

The yellow perch’s fins vary from yellow to orange, as well as orange to red.

The fins of the Euro perch are almost always colored in a very stark red or brownish red, especially in cold water, making this species appear rather beautifully.

Although under the same conditions, the yellow perch’s fins can sometimes get very close to that intense red color.

Did you know? The reddish color of the Euro perch is why it is commonly referred to as redfin perch in North America. Another common name for this foreign species in English perch.

The geographical distribution of these two perch species remains perhaps their most obvious of differences.

The European perch can be found in the whole of Europe and Russia, all the way to the Siberian Kolyma River in the East.

In the 19th century, it was also introduced to Australia, New Zeeland, and South Africa, as an angling species by European settlers.

The yellow perch, on the other hand, can only be found in North America, more precisely, in most of the Northern United States and Canada.

Here they are native to both the Arctic and the Atlantic Ocean, the Great Lakes, the St. Lawrence River and Mississippi River basins, as well as the Mackenzie River and the Great Slave Lake.

RELATED ARTICLE: Check out this in-depth species article on the European perch if you want to find out more about this interesting species!

How to Fish for European and Yellow Perch?

When it comes to fishing for perch, methods and baits are rather similar in both parts of the world, even though the most popular ways of catching the two species differ somewhat.

Float fishing with bobbers and smaller live baits, as well as ice fishing with small jigs and spoons are the most popular fishing methods to catch yellow perch in the US and Canada.

On the contrary, most anglers in Europe will target perch with softbaits or crankbaits on the spinning rod or with bottom-rigged smaller live baits on a medium feeder rod.

The former is used more commonly by hobby anglers and pure predator fishermen, while the latter is much preferred by specimen anglers, which often use 2 rods simultaneously in order to catch perch.

RELATED ARTICLE: If you want to know everything on night fishing for perch, do not miss out on this article I’ve written!

What Is the Biggest Yellow Perch Ever Caught?

The world record yellow perch is an ancient fish of 4lb 3oz that was caught back in 1865 by angler Dr. C. Abbot. This giant was caught in Bordentown, New Jersey and in over 150 years, no one has been able to beat that record.

Bigger fish must be out there somewhere, and it’s definitely time to set a new world record!

How Big Is the Biggest European Perch Ever Caught?

Europe, and especially countries such as Germany, the Netherlands, and Sweden, is a real big perch hub.

A lot of 6 and 7lb+ fish have been caught here over the years and decades and so far, the biggest of them all is a true mammoth of a perch, weighing in at an unbelievable 8lb 4oz.

This perch was caught by angler Stephan Gockel in the Dutch Meuse River in 2010.

To be honest, I think it will be hard to crack this world record any time soon. I have seen a lot of 7 pounders appear over the years, but a perch of over 8lb is an extremely rare catch!

Can You Eat Perch?

The perch is a rather delicate food fish that is enjoyed by many anglers in both Europe and North America.

However, regional preferences vary quite substantially.

While the perch is a commonly eaten fish in the United States and Canada, as well as in many European countries, you will have a hard time finding any serious anglers in countries such as the Netherlands, Belgium, or England who’ll kill or eat their perch catches.

Here, the perch, as well as many other game fish, is considered an extremely valuable sport fishing species that will almost always be caught and released.

In the regions and countries where perch is eaten, people enjoy its delicious meat either fried, baked, or grilled.

What Is the Best Ice Fishing Line for Northern Pike?
← Previous
Zander Fishing at Night (Best Baits and Methods)
Next →
Click here to cancel reply.

Your second to last and next to last sentences, describing the catch and release mentality of the European anglers made me think that if we similarly revered the North American yellow perch as a valuable sport fishing species, then just MAYBE our yellow perch could attain weight and length similar to the Euro perch over time. Maybe?

thanks for reading my article, hope you enjoyed it!

That's an excellent question, I think!

As these two species are so much alike, I'd totally think it possible for yellow perch females to reach a much bigger size if they would be released more. I know of a few Canadian lakes (Simcoe being one), where anglers practice more c&r and the perch in those lakes often reach sizes of 2-2.5lb.

I don't think if they would eventually reach Euro sizes of 6lb or more, but they'd certainly grow way bigger, IMO!