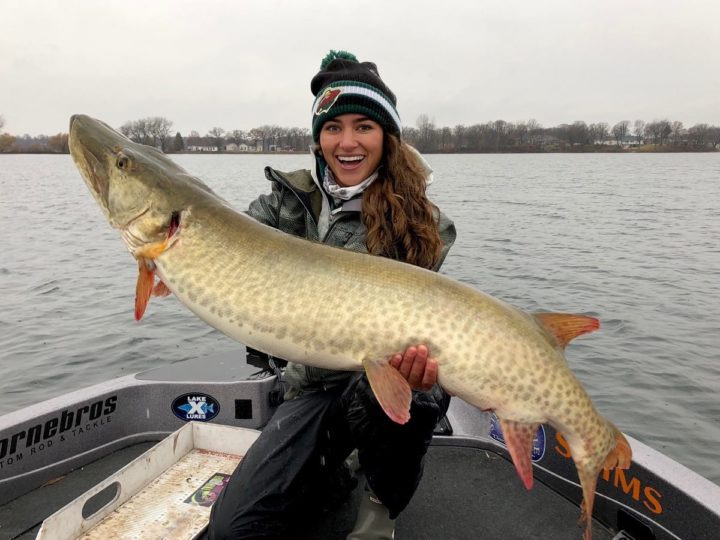 YouTube is the number one platform for fishing-related videos and movies. There are tens of thousands of fishing channels on YouTube, and many fishing YouTubers create really decent content.

I boiled it down to 5 YouTube channels that, in my opinion, have both highly qualitative and informative fishing videos on them and are run by skilled and authentic female anglers.

Why only 5, you ask? Well, if I’m brutally honest with you, I had a hard time finding more channels with female anglers who had all of their clothes on!

I know, this sounds odd. But go ahead and check it out for yourself. Just search for “female fishing channel” and see what happens.

The result will be an overwhelming number of girls in too tight and tiny bikinis. And the worst of it is that most of them can’t even fish or handle their gear correctly.

Being a dad of two little girls, I got a little ashamed, to be honest with you! Imagine having a daughter interested in fishing and checking out some video material with her on YouTube.

If we haven’t come further than this, well, then we have a lot of work left to do in this our world!

But let’s get back to those amazing fishing girls who both wear clothes and catch a ton of really huge fish.

Oh, and most, if not all of them, would probably outfish both you and me! Don’t believe me, then keep reading. You’ll see!

Alright, so my number one pick is Nattie Up North. Not necessarily because she got the most subscribers of the bunch, but because I find her videos very entertaining, well-produced, and super informative.

This Minnesota-based female angler and outdoor enthusiast knows her stuff! Whether it’s kayak fishing for big muskies, ice fishing for northern pike, or clearwater fishing for smallmouth bass, Nattie just always seems to know how to catch them.

I always look at how anglers hold and cast their rods, as you can tell if they’re really into fishing or not this way, you know!

And Nattie really knows her gear. All of it! She’s got great skills and knows how to explain things to her audience.

Another thing I appreciate about her is her authenticity. In the musky video above, she hooks up to a really good fish, and as it’s pretty windy on the water that day, her kayak drifts off into an overhanging tree.

Most YouTubers would edit that scene out of the video’s final version, but Nattie kept it.

And it’s that little detail that manages to beautifully capture the essence of fishing and catching big fish (which, all too often, equals some smaller or greater level of chaos).

I think people can relate to that, and they like Nattie’s fishing videos for their true nature! I certainly do.

Kudos to you, Nattie, for being such a great angler and an authentic on-camera presence!

Number 2 goes to a fantastic saltwater fishing duo. The Gale Force Twins are two Florida-based sisters who rock everything from snappers to barracuda and giant sharks.

They catch a ton of fish and hammer out insane amounts of content! Their channel is only three years old, and they’ve managed to publish over 240 videos, which is impressive.

What I like most about the Gale Force Twins YT channel are their versatility and gear knowledge.

They target an incredible number of species (and not only saltwater, by the way) and manage to hook up to some real giants!

Many videos also answer a lot of gear questions, which gives the channel a lot of authority, in my opinion.

The twins review fishing gear, such as rods and reels, and explain and present it in great depth.

They also have several detailed buyers’ guides on boats (like Best Family Friendly Fishing Boats). I think that’s a great category to cover, and I’m sure many saltwater anglers appreciate informative content like that!

So if you want to see some saltwater action off the coast of Florida or the Bahamas, check out the Gale Force Twins on Youtube right now!

RELATED ARTICLE: Check out this article for the best and biggest fishing channels on YouTube

Up next is Kristine Fischer, and her name says it all! Kristine is a really skilled and passionate female angler who manages to land some truly unbelievable fish while filming for her YT channel.

Just check out the above video of her catching an 11lb+ bass from a kayak.

Not only is the fishing action simply insane, but it’s a true joy to watch Kristine fight and land that fish.

Once again, it’s that authenticity that made me pick that channel because when you see how happy and moved she gets when netting that bass, you know that she is a real angler.

I am sure many of you can relate here; no matter how many fish you catch, every new PB feels like the first one, doesn’t it!?

Kristine’s primary focus is on bass fishing and fishing kayaks, and she’s got plenty of videos on both topics on her channel.

Among them are also quite a few very informative kayak buying guides which are more than worth checking out!

Number 4 is another allrounder from up north. Lady Bass is a relatively young, highly skilled, and super productive female fishing YouTuber.

I mean, she’s got more than 400 (!) videos on that channel, which is an unbelievable number.

She started her channel five years ago, which means she got into the YouTube game very young.

Since then, she has developed her fishing and filming skills, and that young lady banks some serious monster fish!

I am especially impressed by her hard water walleye and lake trout videos, as she has excellent technique and manages to catch some massive fish through the ice.

She’s also got an incredible catch and release know-how, which is always awesome to see, especially in young anglers!

I think, given her young age and the expertise she’s already acquired, Lady Bass is an inspiration for many young fishing girls out there. Great job!

RELATED ARTICLE: Check out this article if you want to read up on how to become a YouTube fisherman yourself!

Number 5 on my list is the YouTube channel Fishing with Becca. Becca is another young fishing lady who puts out a lot of content on the platform and targets plenty of freshwater species.

Every video of hers that I’ve checked has a ton of comments, and she seems to have a very active and loyal audience that she’s interacting with frequently.

I think it’s Becca’s natural and friendly on-camera presence, coupled with a good amount of humor, as well as excellent fishing skills, that makes her videos and channel so popular.

Some of her target species include large and smallmouth bass, lake trout, panfish, and pike on both open water and through the ice.

In some of her videos, she also tries out completely different methods or targets not-so-popular species such as common carp, giving the channel an exciting and varied touch.

She also tests many fishing gear and tackle, making her channel extremely informative, especially for young anglers and beginners.

I have several buddies in the US and Canada whose kids are avid fans of Becca and her YouTube fishing channel.

And I’m sure she’ll only become more popular because this is a fishing girl who really understands the YouTube game!