How Big Do Brook Trout Get? (Average and Maximum Sizes) 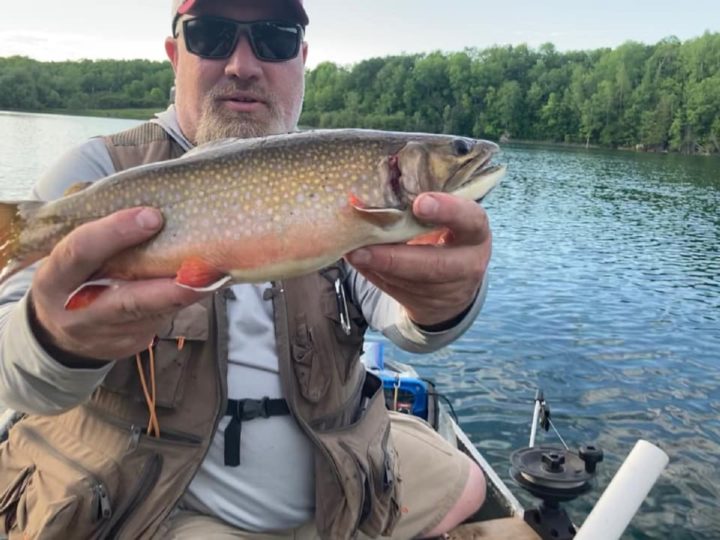 Even though they are a relatively small fish species, brook trout are very popular among fly and spin anglers.

But exactly how small or big do brook trout actually get?

While they can reach a maximum size of 30 inches and 15lb, the vast majority of brook trout will have a length of about 5 to 15 inches and a weight of 1 to 5lb. Lake-dwelling brookies generally outgrow stream-dwelling ones.

Keep reading this article to get all the facts on brook trout and their average and maximum sizes and learn more about the unbelievably huge world record brookie!

What Is the Maximum Size of Brook Trout?

The brook trout (Salvelinus fontinalis) is one of the smallest members of the salmonids, reaching a maximum length of about 15 inches and a maximum weight of 5lb in most waters.

However, the so-called coaster brook trout of the Great Lakes and their tributaries can reach bigger sizes, with a maximum length of up to 25 inches and a maximum weight of about 10lb.

It was long believed that these coasters (which get their name from the simple fact that they are found along the shorelines of the Great Lakes) are a unique strain of brook trout belonging to the Great Lakes.

But studies have shown that they originate from the native tributary brook trout populations and merely grow faster and reach larger sizes thanks to the abundance of forage found in the lake environments they inhabit.

But generally speaking, a brookie of about 5lb will undoubtedly be considered a big trophy fish in most lakes, rivers, and streams around the North American continent!

What Is the Average Size of Brook Trout?

For most anglers, catching a 5lb+ brook trout is a distant dream, if not an impossibility.

Not necessarily because they lack the needed skills to catch such a fish, but rather because their local waters simply do not hold specimens of such a size!

The average brook trout will have a length of about 5 to 10 inches and an approximate weight of 0.3 to 1lb.

Of course, the average size will depend in several factors, including:

The size of the brook trout’s habitat can be especially important regarding their average size.

Brookies can be found in the smallest of streams, and in such an environment, the fish will naturally have a much smaller average size and perhaps only measure a few inches and ounces.

On the contrary, brook trout that inhabit big river or lake systems with plenty of food and little competition and predation might have an average size of 10 to 15 inches and 1 to 2lb or more.

What Is the Biggest Brook Trout Ever Caught?

Thanks to the work of the IGFA (the International Game Fish Association), practically every fish species has its world record.

However, the story behind the world’s biggest brook trout does stick out!

For one thing, it is one of the IGFA’s oldest standing world records. As this brook trout was caught in 1915 (!), this world record is over 100 years old, which is pretty unheard of in the world of sport fishing.

For another thing, this record fish was a true giant. I mean, brookies of 10lb are extremely rare and don’t come around very often.

Not only is that a genuinely gigantic specimen, but given that the record has lasted for such a long time, it’s probably one of very few fish in the entire world that could even reach such a weight.

But it doesn’t end there! The length and depth of this brook trout were as unbelievable. It had a length of 31.5 inches and an incredible depth of 11.5 inches.

The lucky angler who caught this behemoth in the Nipigon River in Ontario (Canada) was a fly fisherman named J.W. Cook, and what joy he must have felt on that day.

Naturally, the incredible size of the fish was questioned by many, which is why Cook had the fish mounted and examined by renowned ichthyologists and biologists.

All of them confirmed that the fish was a brook trout. Additionally, they all agreed on the size of the fish, which means that its authenticity is clearly beyond question.

How Fast Do Brook Trout Grow?

The growth rate of brook trout is, once again, determined by their habitat.

Fish that are found in smaller rivers and streams will grow slower than brook trout that inhabit big river systems or lakes.

But again, the growth rate will vary greatly from water to water and state to state!

What is the Lifespan of a Brook Trout?

The brook trout is not only one of the smallest members of the salmonids but also one with a very short lifespan.

The average lifespan of brook trout in streams and small rivers is a mere 3 years. Under the right circumstances, some individuals can reach a maximum age of 4 to 5 years in such habitats.

Lake-dwelling brookies do not only get bigger but also older. Their average life expectancy is between 3 and 6 years, and they can reach a maximum age of about ten years.

However, I do wonder how old that giant world record brook trout from the Nipigon River was.

Given its exceptional size, it must have surely been way older than ten years, wouldn’t you agree?