How Big Do Brown Trout Get? (With Average and Maximum Sizes) 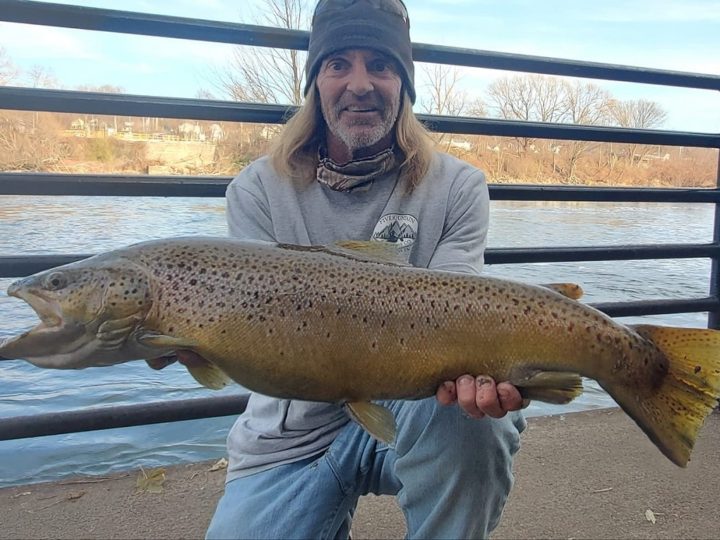 The brown trout is one of the world’s most popular trout species and a fish that can reach a respectable length and weight.

While native to Europe, it has been introduced all over the world, and big browns can be caught in many countries today. But how big do brown trout actually get?

Brown trout (Salmo trutta) can reach a weight of about 45lb and a length of 45 inches. Their average size is between 1 and 5lb and 10 and 20 inches. The world’s largest brown trout can be found in the US and New Zealand.

Keep reading this article to learn more about the maximum size of brown trout, what the biggest brown trout ever caught weighed, and how old this trout species can get.

What Is the Maximum Size of Brown Trout?

It might sound too big to be true, but quite a few 40+lb brown trout have been caught over the years!

Salmo trutta, which is the brown’s Latin name, might not be the biggest of the trout family, but it surely can grow to a prodigious size.

The maximum length of this fantastic trout species is around 45 inches, while its maximum weight is about 45lb.

Although, given that the brown trout can nowadays be found all around the globe and inhabits many remote, unfished rivers and lakes, I am pretty sure that, somewhere out there, more than one 50-pounder must swim around!

It’s just waiting to be caught by some lucky angler.

DID YOU KNOW: According to local reports, a massive 68lb wild brown trout was netted in Switzerland’s Lake Maggiore back in 1928. This catch is, however, not verified. Who knows, though, right!?

What Is the Average Size of Brown Trout?

Of course, giant brown trout like that will remain a dream for most anglers, and most of us will have to be content with an average-sized brown.

However, the average size of your local brown trout heavily depends on the habitat and genetics of the respective population.

I know of waters in the United States that hold brown trout with an average size of 8 to 14 inches.

On the other hand, many European brown trout populations can have a much bigger average size. In that art of the world, browns can have an average weight of 4 to 10lb and an average length of 15 to 25 inches.

Factors that can influence these varying average sizes can include the following:

What Is the Biggest Brown Trout Ever Caught?

If you, like me, are an avid trout angler and have caught a few browns, you know that a fish of 10lb is already quite a monster.

A 20lb brown trout can hence be considered to be a true giant. Everything beyond that is, in my opinion, a fisherman’s wet dream and a spectacular catch.

I can only imagine how the guy who caught the world record brown trout, a fish of an unbelievable 44lb 5oz, must have felt when he landed that behemoth!

It was an angler named Seumas Petrie who caught this enormous fish on the Ohau Canal in New Zealand in 2020.

The interesting thing is that the same canal, the Ohau, also produced the previous world record brown trout, a fish that weighed in at 42lb 1oz and was caught back in 2013.

Clearly, New Zealand is the place to go if you’re after monster browns!

What Is the Biggest Brown Trout Ever Caught in the US?

While New Zealand holds the current world record fish, brown trout in the US aren’t all that much smaller.

Of course, you’d need to target them in the right states, but fish between 35 and 40lb are definitely in the cards here!

Two US states that really stick out here are Arkansas and Michigan.

The Great Lakes and their numerous tributaries around Michigan are another hot spot for big brown trout.

Michigan’s Big Manistee River holds the US record for brown trout to this day.

In 2009, salmon angler Tom Healy was casting a Rapala Shad Rap for chinooks when he hooked up to a giant brown trout instead.

That fish weighed an enormous 41lb 7oz and must have given Tom the fight of a lifetime!

How Big Is the Biggest Brown Trout Ever Caught in Canada?

Brown trout can be found all over Southern Canada, but the country’s populations produce somewhat smaller fish than those found in the United States.

The biggest brown trout in Canada can be found in Lake Ontario and Lake Diefenbaker.

Diefenbaker’s record brown trout is a fish of a little over 32lb, while Lake Ontario holds the current national record fish.

That brown trout weighed in at 34lb 6oz and was caught by angler Richard Matisiak in 1994.

How Big Do Brown Trout Get in Europe?

Europe’s biggest ever brown trout was caught in Sweden back in 1991 by a Swedish angler called Kurt Stenlund.

That fish, which is a very impressive brown trout for Scandinavian levels, had a weight of 37lb 8oz and was caught in Lake Storsjon in the Northern parts of Sweden.

The current UK record brown trout is a fish of 31lb 12oz, which angler Brian Rutland caught on Loch Awe.

How Fast Do Brown Trout Grow?

Once again, this will depend entirely on the brown trout’s habitat and genetic coding.

On average, it can be said that river-dwelling brown trout reach an approximate length of 5 to 8 inches after two years and 10 to 15 inches after 3 to 4 years, which is when they mature.

Lake-dwelling browns tend to grow somewhat faster, which can be explained by an often greater abundance of food.

After that, their annual growth will slow down to 1 to 2 inches, at most.

How Old Do Brown Trout Get?

While their average life span is about 5 to 6 years, many brown trout can get as old as 10 years.

Some exceptionally large specimens that researchers have studied are even said to have been as old as 20 years! Such an age must, however, be considered an absolute exception among brown trout.