How Big Do Crappie Get? (With Record Lengths and Weights) 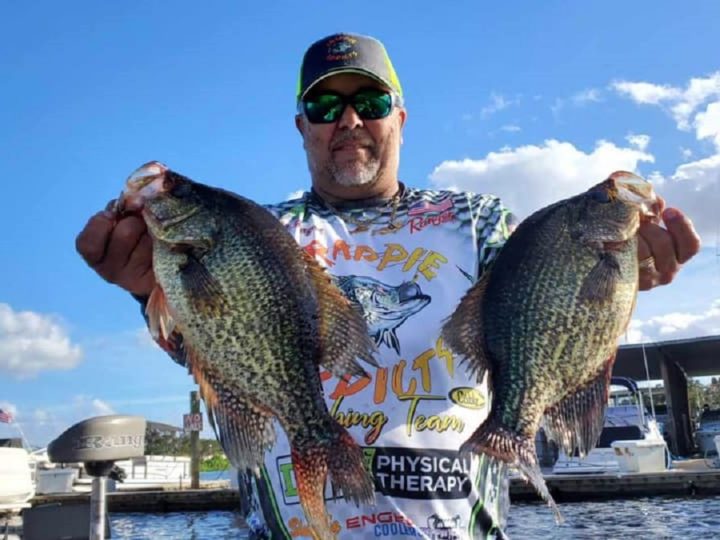 The crappie is one of North America’s most popular game fish, and countless anglers dream of catching a real slab.

But how big do crappie actually get, and what makes a crappie a “slabber”?

While the average size of crappie is somewhere between 8 and 12 inches and 1/4 and 1lb, they can reach a maximum length of about 20 inches and a maximum weight of a little over 5lb. Crappie with a length of 13-15 inches and a weight of 1.5 to 2lb are generally considered trophy fish.

Keep reading this article and find out everything there is to know about the size of crappie, the current world record, and what US state has the biggest crappie.

DISCLAIMER: Information about average and trophy sizes of crappie were provided by pro staffer and crappie expert Brian Harford.

What Is the Maximum Size of Crappie?

They can reach a maximum length of about 20 inches and a maximum weight of just over 5 pounds, with the black crappie being the slightly heavier of the two species.

That’s mainly because black crappie are a little more compact and thicker than white crappie, giving them a slight weight advantage.

Generally speaking, though, a 20 incher weighing around 5 pounds is definitely not the biggest species swimming around in most lakes and rivers!

However, crappie are extremely popular game fish despite their fairly small size. In fact, according to a recent survey, it’s America’s second most popular freshwater gamefish!

The following reasons explain the crappie’s immense popularity among anglers:

The last point especially explains why crappie are so popular among families and beginners.

You don’t really need sophisticated tackle for them, and, with a bit of luck and skill, you can fill your limit pretty quickly.

Of course, most of those fish will be of a much smaller size. And that makes catching the really big ones even more attractive!

And let me tell you, catching crappie of more than 4 pounds is a real challenge and a huge achievement!

RELATED ARTICLE: How to Catch Crappie in Clear Water Conditions (With Bait and Color Tips)

What Is the Average Size of Crappie?

As mentioned above, the vast majority of crappie that anglers in the US and Canada are catching will be of average size.

Of course, that average size will vary heavily from state to state and water to water, as plenty of factors can influence the average size of any given crappie population.

Such factors can include the following:

And so, a lake in Minnesota, with a lot of food competition and long, harsh winters, might hold crappie with an average size of 6-8 inches and 1/4-1/2lb

On the contrary, a lake down in Florida, with excellent water quality and high food abundance, might have a crappie population with an average size of 10-12 inches and 1 to 1 1/2 pounds.

What Is the Biggest Crappie Ever Caught?

As I have mentioned earlier, the crappie family consists of two members; black and white crappie.

As these are two separate species, they each have their all-tackle world record.

The current world record white crappie is a fish that was caught more than 60 years ago.

Angler Fred Bright caught this massive fish of 5lb 3oz in Enid Dam (Mississippi) back in 1957.

Given that, especially, white crappie of more than 5 pounds are extremely rare, it’s no wonder that this record has been unbeaten for so long!

It was supposedly 21 inches long, which also makes it the longest crappie ever caught.

The biggest black crappie ever caught is a giant 5lb 7oz specimen that angler Lionel Ferguson caught in Richeison Pond (Tennessee) in 2018.

As this crappie weighed 4 ounces more than the white crappie world record, it’s also the heaviest crappie ever caught by an angler.

What State Has the Biggest Crappie?

As the world records and various other trophy catches show, the southern states tend to dominate the world of the slab crappie.

Most anglers will probably agree that the state of Tennessee has the biggest crappie in all of America!

And it’s not only its numerous ponds that hold giant crappie, but plenty of Tennessee’s lakes also produce a ton of slabs.

Reelfoot Lake stands out here, being a water that’s famous for its large numbers of giant crappie.

Alabama is another producer of really big crappie. Here, Weiss Lake is known to many anglers as the Crappie Capital of the World.

This lake produces respectable amounts of 2 and 3-pounders and is a top-rated destination for crappie fanatics from all around the country.

How Big is a Trophy-Size Crappie?

A trophy size lies in the eye of the beholder, but most anglers would agree that crappie of about 15 inches and 2lb can be considered trophy fish.

But again, that will depend entirely on the water they’ve been caught in and on your definition of trophy-sized crappie.

If you manage to land a crappie of 1,5lb in a water that mostly holds fish of about 1lb, you could most certainly call that fish a trophy catch!

On the other hand, if you’re fishing a lake that produces mostly 2 or 3 pound fish, maybe a trophy size in that particular water would start at around 3 1/2 or 4lb.

I think that’s really up to you, and no matter where you set that mark, a slab is a slab, and catching a good-sized crappie should always be celebrated if you ask me!

How Many Inches Do Crappie Grow Per Year?

During their first two years, crappie can grow up to 3 to 4 inches annually. After those initial two years, their growth rate tends to slow down to around 2 inches per year.

Studies have shown that white crappie tend to grow faster than black crappie, primarily because they have a longer and more slender body shape.

Additionally, researchers have observed that crappie in the warmer southern waters grow much faster than those living in the colder waters of the north.

How Old Can Crappie Get?

Crappie mature at around age 3 or 4 and have an average life span of 7 to 10 years.

However, very old specimens of up to 15 years have been recorded,

even though such an age can be considered extremely rare among crappie.

Most of these fish have been caught in small ponds with optimal living conditions for the crappie inhabiting them, so they are more the exception than the rule!

If you’re looking for solid and reliable crappie fishing gear, these tips might be useful for you.

A solid and popular allround spinning rod! This Fenwick rod is lightweight, has great sensitivity, and phenomenal action. Fits both beginners and seasoned anglers. A 6’6” or 7′ Light rod is your best pick for crappies.

An affordable high-performance spinning reel that’s perfect for crappie. Pflueger spells high quality and awesome durability! Makes for a great combo together with the Fenwick spinning rod. A size 20 is a solid choice for crappie!

One of the best braids available today! Zero stretch, great feel, and immense strength make this line the perfect pick for crappie! Use a 10lb test in open water and a 20lb test when fishing near or in snags.

When Do Smallmouth Bass Spawn? (Interesting Fish Facts)
← Previous
How Big Do Largemouth Bass Get? (With Average and Record Sizes)
Next →