How Big Do Groupers Get? (Average And Maximum Sizes) 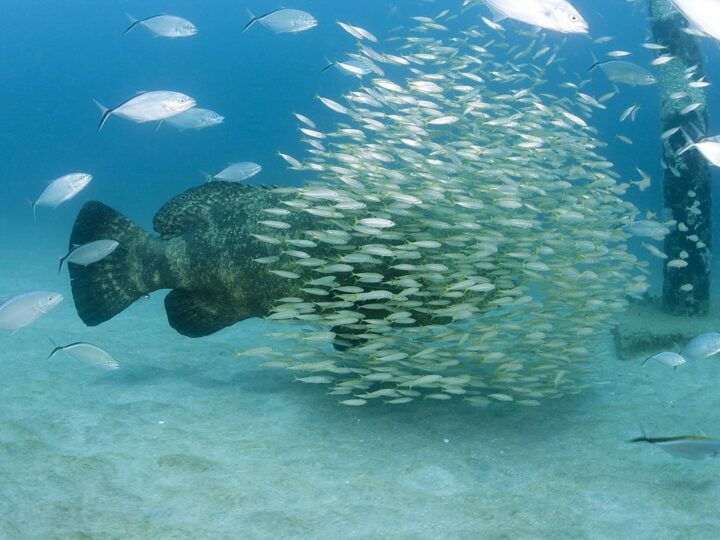 Groupers are one of the most popular saltwater game fish in Florida, and quite a few of them can reach monster sizes of several hundred pounds.

As there are so many different types of groupers, I wanted to find out just how big they can really get and what the biggest grouper species is.

Goliath groupers are, by far, the largest member of the grouper family. These giants can reach a maximum length of 8 feet and a maximum weight of about 800 pounds. The current all-tackle world record goliath grouper is a monster of 680lb.

Continue reading this article to find out how big various grouper species are, what the smallest grouper type is, and how old these fish can get.

What Is the Largest Species of Grouper?

Groupers belong to a broad family of fish called Serranidae.

With more than 30 main species and even more subspecies, it takes work to know how big they can get and what grouper species is the largest.

To save you some time, I did the research and discovered that the biggest grouper type is the Atlantic goliath grouper.

And as this article would be far too long if I included all the grouper species and their varying sizes, the goliath grouper is the one we’re mostly going to focus on.

Let’s get right to it, shall we?

What Is the Maximum Size of Groupers?

Atlantic goliath groupers can reach a maximum length of about 8 feet and a maximum weight of approximately 800 pounds. However, a majority of fish won’t exceed a weight of around 400 pounds.

Due to their enormous size and the fact they swim around and approach divers with extreme calm and caution, they are commonly referred to as the ocean’s gentle giants.

And giants they are! Though, if you happen to hook up to one with a rod and reel, they won’t be as gentle anymore.

These behemoths are known to be one of the world’s hardest and smartest fighting game fish, and catching a grouper of several hundred pounds is the fish of a lifetime (if you manage to get it into the boat, that is).

I can’t even imagine what it must feel like to have a 500+ pound goliath grouper on the other end of my line.

Sadly, the species, which is home to the Southwestern Atlantic, has been overexploited for many decades and is only slowly starting to recover.

It is still being classified as an endangered species by the Florida Fish and Wildlife Conservation Commission and other authorities, even though the FWC has approved a limited recreational harvest for goliath groupers in state waters in 2022. And that’s a good sign!

But in the extreme depths of the Atlantic ocean, who knows what monster grouper might be found? A 1000-pound fish is probably out there somewhere!

RELATED ARTICLE: How Big Do Hammerhead Sharks Get?

What Is the Average Size of Groupers?

Hook and line-caught goliath groupers greatly vary in size. From all the record catches, their average size ranges from 50 to 200lb.

But as this type of grouper is a relatively rare catch among sport anglers, let’s also take a look at the more commonly fished-for and caught grouper species and their respective average sizes:

No matter which grouper you’re after, you can always expect a decently sized fish, as most are pretty large fish, except for scamps, as that one is a relatively small grouper species.

More often than not, though, you’ll find yourself hauling in a real trophy grouper!

What Is the Biggest Grouper Ever Caught?

As the Atlantic goliath grouper is, by far, the largest member of the grouper family, naturally, this species also represents the all-tackle world record.

The biggest hook and line-caught grouper ever caught is a regular monster fish of 680lb.

Imagine fighting a massive fish, and then a monster like that breaks the surface. Unreal!

This goliath grouper was caught off Fernandina Beach in Florida in 1961 by angler Lynn Joyner.

Many 400 and 500+ pounders have been caught since, but as of yet, no one has been able to beat that record grouper.

However, given that they’re out there, it’s only a matter of time before someone is lucky enough to catch a 700lb goliath grouper!

RELATED ARTICLE: What Is the World’s Biggest Tiger Shark?

How Big Do Groupers Get in Florida?

he Florida Keys are home to various grouper types, and thanks to the favorable conditions of the local marine environment, they all grow to respectable sizes.

Once again, our old friend, the Atlantic goliath grouper, wins the title of Florida’s biggest grouper.

For one thing, the world record was caught around here, and for another, plenty of fish between 200 and 400lb are caught regularly around here.

Of course, the other grouper species found off Florida shall also be named!

Here are the state records for all the Florida grouper types:

What Is the Smallest Type of Grouper?

With its maximum size of about 10 to 12 inches, the coney grouper (Cephalopholis fulva) is undoubtedly one of the smallest-known types of groupers.

Ten inches seems dwarf-like compared to some of the coney’s monstrous cousins, like the warsaw and goliath grouper.

But even if the coney grouper is only a subspecies of the wider grouper family, it’s nonetheless a grouper!

This grouper species is mostly found in coral reefs at water depths of up to 200 feet.

It inhabits the Western parts of the Atlantic Ocean from South Carolina in the north down into the Gulf of Mexico and the Florida Keys off the coast of South Florida.

How Fast Do Groupers Grow?

Despite being a large fish species, groupers actually have a relatively slow growth rate once they reach adulthood.

Young goliath groupers do, however, grow quite rapidly until the age of five or six. On average, they will grow 6 inches per year.

But once they reach maturity, around age five, their growth rate will slow considerably.

Between age 5 and 15, their average growth rate is a mere 1.2 inches per year.

Once they reach the age of 25, it slows down even further to less than 0.4 inches per year.

Their immense length of up to 8 feet (96 inches) means that goliath grouper must get pretty old, right?

How Old Do Groupers Get?

While the smaller grouper types (like scamp, yellowfin, and red grouper) have an average lifespan of 10 to 15 years and can reach a maximum age of 25 to 30 years, the bigger grouper species can get even older.

Big grouper types like warsaw, black, and goliath grouper have an average life expectancy of 20 to 30 years and can live to an age of around 50 years.

Snowy grouper stick out here, as one research team caught a specimen back in the 90s that they estimated to be around 54 years old, making this type the oldest species of the wider grouper family.