How Big Do Halibut Get? (Average and Record Sizes) 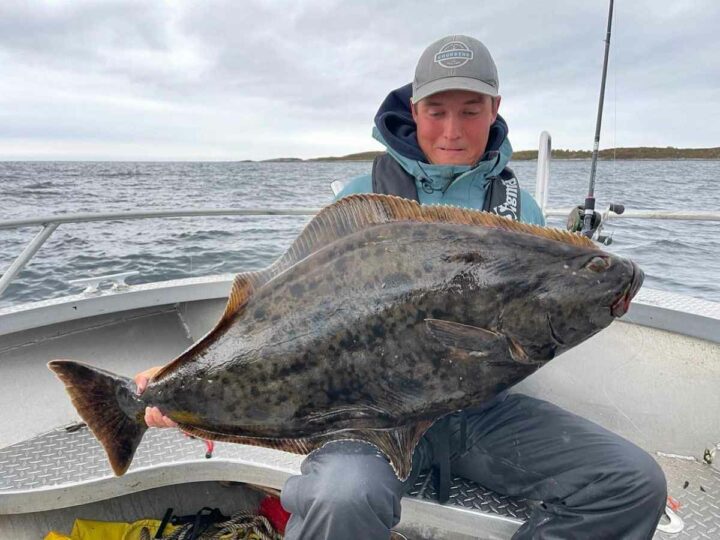 Halibut are fascinating giants living in the great depths of our oceans. All three main halibut types can reach respectable sizes, but many people wonder just how big they can really get.

Keep reading this article to learn more about the varying sizes of halibut, where the biggest halibut in the world are found, and how old this interesting fish species can get.

What Is the Maximum Size of Halibut?

Halibut is the common name for not just one but three flatfish species, and while all three are pretty large fish, they reach different maximum lengths and weights.

The biggest species of the three is the Atlantic halibut. It can reach an insane length of about 15 feet and a maximum weight of around 700lb.

The next biggest flatfish species is the Pacific halibut. This fish, commonly referred to as “barn door”, can reach a maximum length of 8 feet and a weight of about 500lb.

The “smallest” of the trio is the Greenland halibut. This fish has a maximum length of just under 4 feet and can reach a maximum weight of 100lb.

DID YOU KNOW: The California halibut is actually a flounder, belonging to a different family of fish. It only weighs up to about 50lb.

Why Do Halibut Get So Big?

Several factors can explain the large size of halibut. The simplest and most obvious one is genetics.

Halibut fish have evolved to grow large for various reasons.

Being that large (and wide) gives you a huge advantage when fighting off bigger predators such as sharks or sea mammals.

Halibut are delicious, and many ocean predators want to sink their teeth into them. But thanks to their enormous size, the number of natural enemies has decreased significantly.

Another reason is food competition, as not many other big predators roam the extreme depths in which halibut are typically found.

They can live in depths of hundreds and even thousands of feet, and while there’s still plenty of forage to be found down there, the competition is often much more scarce.

According to recent studies, a third reason is stock depletion. Halibut are a highly popular food fish and has been commercially exploited for many decades.

Research has shown that the increase in growth rates of halibut is primarily a density-dependent response to a decrease in stock size.

And that does make a lot of sense! Fewer fish means that the remaining ones have more food and can grow bigger.

How Big Is the Average Halibut?

Male halibut are much smaller than their female counterparts, which is essential to remember when talking about size.

When it comes to the biggest halibut type, the Atlantic halibut, males average around 20 to 50lb, while the average adult female has an average size of 100 to 150lb.

Male Pacific halibut average 20 to 40lb, and female halibut have an average size of about 60 to 120lb.

Greenland halibut, the smallest species of the three flatfish, have an average size of 10 to 20lb for males, and 25 to 50lb for females.

It is, however, noteworthy that average sizes can vary quite a bit from population to population and region to region.

Where Can You Find the Biggest Halibut in the World?

The biggest Pacific halibut are probably found in the upper Pacific Northwest, as most record fish have been caught there.

More specifically, the deep and cold waters of the Gulf of Alaska and the Bering Sea, off the west coast of Canada, are hot spots for giant Pacific halibut.

The biggest Atlantic halibut inhabit the northeastern parts of the Atlantic.

The waters off the coast of Norway come to mind when one thinks of monster halibut.

And, true enough, the current world record Atlantic halibut was caught precisely there, as you can read in the next section of this article.

It’s not easy to find reliable information on the biggest Greenland halibut, as not that many are being caught.

Most likely, though, the largest specimens can be found around Greenland and the northern parts of the Atlantic and Pacific oceans.

What Is the Biggest Halibut Ever Caught?

The biggest Atlantic halibut ever caught is a behemoth of an incredible 515 pounds that German angler Marco Liebenow caught off the coast of Norway back in 2013.

Halibut are strong fish, so I can’t even guess how tough it must have been to haul in a 500-plus pounder. What an unbelievable experience that must have been!

That extreme fish also made the former all-tackle world record of 418 pounds and 13 ounces look like a relatively small fish.

The current world record Pacific halibut is a huge fish of 459 pounds.

It was called in Dutch Harbor (Alaska) by angler Jack Tragis in 1996.

As there have been caught a few unofficial catches that beat that record over the years, it’s only a matter of time before the cold waters of Alaska produce a new world record Pacific halibut.

As mentioned above, there are few registered catches of Greenland halibut, which makes writing about it accurately somewhat more complicated.

According to the IGFA database, the current all-tackle world record Greenland halibut is a 9lb 14oz fish caught off the coast of Greenland by angler Kai Witt in 2008.

Admittedly, that’s not the biggest Greenland halibut I’ve ever seen, but if nothing else has been recorded, then that’s all we know.

Bigger fish have surely been caught, though, and a new record will surely be registered soon!

How Fast Do Halibut Grow?

Although halibut can reach such enormous sizes, they have a relatively slow growth rate compared to other fish species.

After their first two years, they might only have a weight of 1 to 2lb and a length of 10 to 15 inches.

What’s really interesting is that females grow about three times as fast as males.

That’s why almost all halibut fish of more than 50 or 60lb are female!

Given that they can reach a mighty weight of 700lb and an incredible length of 15 feet, it’s evident that this fish species must get quite old as well.

What Is the Lifespan of Halibut?

While the average life span of halibut is between 10 and 20 years, they can reach a maximum age of 50 to 55 years, which is really respectable for a fish species.

DID YOU KNOW: The age of halibut is estimated by counting the rings in the fish’s ear bone.

However, both commercial fishermen and scientists assume that there are even older halibut out there!

The current world record Atlantic halibut (the 515lb behemoth from Norway, remember?) had an estimated age of “only” 50 years, and plenty of 400-plus pounders with an estimated age between 40 and 50 years have been caught in the last decades.

That leads us to the safe assumption that fish of 600 and 700 pounds must be much older than that, right?

What Is the Oldest Halibut Ever Caught?

There are no official records, but the NOAA claims that the oldest Pacific halibut on record had an estimated age of 55 years.

The oldest Atlantic halibut to date is the Norwegian world record fish of 50 years.

Unfortunately, that’s all we know for now. More research should be conducted in this field, as the halibut’s real maximum age remains a mystery!