How Big Do Hammerhead Sharks Get? 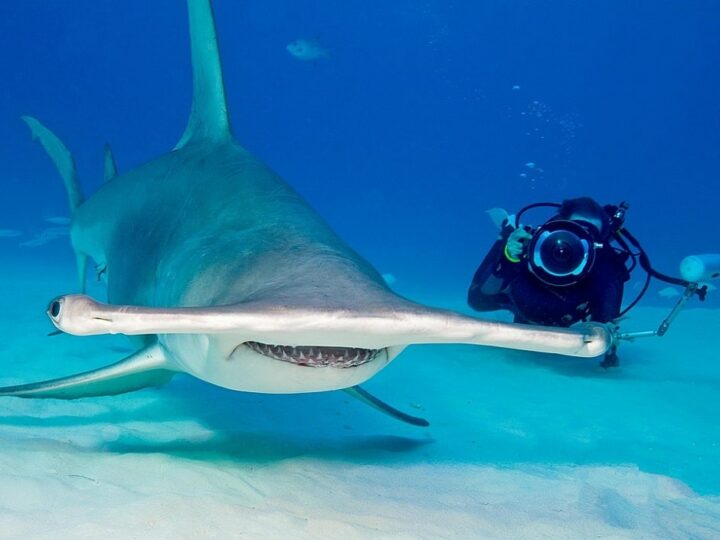 While most people are familiar with their hammer-shaped heads, many don’t know much about this shark species’ size and how big this shark type can actually get. That’s why I decided to write this article!

While the average size of hammerhead sharks is 8 to 12 feet and 300 to 550lb, they can reach a maximum size of about 16 to 18 feet and 1,300lb. Female hammerheads tend to grow larger than males and can outgrow them by several feet.

If you want to learn more about this amazing shark species and its various sizes, and find out if there really are 2-foot hammerheads out there, all you have to do is keep reading!

What Is the Maximum Size of Hammerhead Sharks?

The great hammerhead shark (Sphyrna mokarran) is the largest member of the hammerhead family and the, behind the tiger and great white shark, the third biggest predatory shark on the planet.

This massive ocean hunter can reach a maximum length of 16 to 18 feet and a maximum weight of about 1,300lb.

Like many other fish species, female hammerheads usually outgrow their male counterparts, as males typically only reach a size of about 12 or 13 feet.

That means that basically all great hammerheads of 14 feet and 1000lb or above are female.

It must also be mentioned that hammerheads of 14 feet and 1,000lb or more are relatively rare, and most specimens around the world are of smaller sizes within the species’ average length and weight!

What is the Average Size of Hammerhead Sharks?

However, these numbers are based on a global average and can and often will vary significantly between different regions and oceans.

In colder waters with fewer food sources, the average great hammerhead might only measure 8 to 10 feet and weigh 300 to 400lb.

On the contrary, hammerhead sharks found in warm tropical waters with abundant food sources might average a length of 10 to 14 feet and a weight of 500 to 800lb.

What Is the Biggest Hammerhead Shark Ever Caught?

The current IGFA All-Tackle world record hammerhead shark is a giant fish of 1,280lb that was caught off Boca Grande (Florida) in 2006.

Angler Bucky Dennis managed to land and measure his giant shark, and the final length was an incredible 14 feet 3 inches.

A 14-footer weighing almost 1,300lb is something highly unusual, though, and was later explained by the unfortunate fact that this giant female hammerhead had more than 50 pups inside of her.

There is also an unofficial length record that I wanted to include in this article.

In 2019, hall of fame golfer Greg “The Shark” Norman was fishing for sharks off Florida together with Josh Jorgensen and his BlacktipH crew (edit: wishing Josh a speedy recovery from his cancer!).

After a few bites and smaller sharks, Greg hooked up to a regular giant that turned out to be an insane hammerhead of an estimated 14 feet 7 inches and 1,200 to 1,300 pounds.

Being true sport anglers, they decided to release the massive shark and not bring it to shore, which is why this behemoth of a hammerhead was never made an official world record.

How Big is the Biggest Hammerhead Shark Ever Recorded?

While there are numerous reports and mentions of huge hammerhead sharks between 15 and 20 feet, none are official or have solid visual proof.

Hence, the biggest hammerhead shark ever officially recorded is the current world record fish of 14 feet and 3 inches and 1,280lb.

Then, there’s Greg Norman’s catch, but as mentioned above, that isn’t an officially recorded size either!

Furthermore, a book references a hammerhead shark measuring 20 feet, and most online sites will refer to that fish as the biggest hammerhead ever recorded.

However, that shark’s length is a mere mention in the 1984 book “Sharks of the World: An Annotated and Illustrated Catalogue of Shark Species Known to Date.”

Could somebody please catch a 20-footer and make it an official world record. It can’t be that difficult, can it?

Where Are the Biggest Hammerhead Sharks Found?

The biggest member of the wider hammerhead family, the great hammerhead shark, is predominantly found in the tropical and temperate waters of the Atlantic, Pacific, and Indian oceans.

According to research and catch reports, the biggest specimens are typically found in the Northwestern Atlantic and the Gulf of Mexico.

More specifically, the waters off Florida and the Bahamas are often mentioned in combination with giant hammerhead shark sightings.

How Big Was Old Hitler the Hammerhead?

“Old Hitler” is a regular Florida legend that supposedly stalked the Tampa Bay area in the 1970s.

This giant hammerhead shark was said to measure at least 20 feet and weigh around 2,000 pounds. Other accounts state that it was as long as 25 feet.

Some fishermen claim it got its name from a swastica-shaped scar on its forehead (presumably from a boat engine). Others say that the name “Old Hitler” originated during World War II, when German submarines were attacking and sinking US marine vessels off the coast of Florida.

During that time, big hammerheads cruising near the surface were often mistaken for German submarine sightings.

Yet others claim the name was given to the shark by local fishermen who had seen the shark and found him to be highly aggressive and mean.

The story, or legend of “Old Hitler” sounds like classic anglers’ folklore if you ask me!

For one thing, there has never been an official record or photo proof of this ocean giant.

For another, there are far too many different accounts of the shark.

And finally, it is entirely out of the question that a 20-foot hammerhead sighted in the 1940s was still roaming the waters off Florida in the 1970s. Some even say it’s still making its rounds today, which is equally impossible.

What is possible, though, is that the legend of “Old Hitler” is actually a series of big shark sightings over the decades since WW2.

Maybe none of them measured 20 feet or more, or maybe one or a few of them did. But giant hammerheads of 15 to 18 feet certainly do roam the waters off Florida and the Gulf of Mexico.

So, most likely, there’s still some degree of truth to this angler’s tale!

How Big Is Big Moe the Hammerhead Shark?

“Big Moe” is yet another shark legend, but in my opinion, one that is far more believable and likely to be true.

This hammerhead monster appears to stalk the lower Florida Keys and often appears at the Bahia Honda Bridge and 7 Mile Bridge.

Numerous reports suggest that this elusive great hammerhead measures around 18 feet and weighs around 1,000 pounds.

And while that would be a huge hammerhead, its size really isn’t that impossible!

Sure, 18 feet would make “Big Moe” the, by far, longest hammerhead shark ever recorded, but with a realistic weight of 1,000 or so pounds, it’s not unlikely that such a long hammerhead actually exists!

I guess we have to wait for “Big Moe” to be caught and measured, either by some Florida anglers or a research team.

The hammerhead vs. great white is an interesting comparison, as the two species are the largest predatory shark types on earth.

Regardless of that fact, the great white shark almost always wins both the length and weight game!

While both shark species share a similar average length of somewhere between 10 and 15 feet, hammerhead sharks rarely exceed more than 16 feet.

On the other hand, great whites often reach lengths of 16 to 18 feet, and quite a few specimens with record lengths of 18 to 20 feet have been reported.

But the biggest difference between hammerhead and great white shark is weight, not length!

Great white sharks are built much more compact than hammerheads and practically always outweigh them.

The average female great white will weigh between 1,500 and 2,500 pounds, which already dwarfs the maximum reported weight of great hammerheads (1,280lb).

A fully grown female great white (like Deep Blue) can fairly easily reach a weight of 4,000 to 5,000lb, a weight class hammerheads can only dream of.

RELATED ARTICLE: What Is the Biggest Great White Shark Ever Caught?

The tiger shark vs. hammerhead shark comparison is more balanced, as these two species practically share the same average and maximum length, give or take.

Both adult hammerhead and tiger sharks have an approximate average length of 8 to 12 feet and a similar maximum length of about 14 to 18 feet.

The average and maximum weights between these two shark types are another story, and once again, the hammerhead loses.

While tiger sharks aren’t nearly as heavy as great whites, they will still outweigh most grown hammerheads!

While hammerhead sharks can reach a maximum weight of around 1,300lb, really big tiger sharks can easily push the scale down to 1,500 or even 2,000lb.

RELATED READING: What Is the Biggest Tiger Shark on Record?

How Fast Do Hammerhead Sharks Grow?

Compared to other shark species, hammerheads have a relatively slow growth rate and reach maturity at around 7 to 9 years.

And that growth rate belongs to the scalloped hammerhead shark, the fastest-growing member of the wider hammerhead family.

This means that all other hammerhead species have an even slower growth rate.

For example, the most famous of them, the great hammerhead shark, needs at least 9 to 10 years to reach maturity.

DID YOU KNOW: Female hammerhead sharks are often found in deeper waters than males, feeding on bigger prey. As a result, females are practically almost bigger than males when they reach maturity.

At birth, great hammerheads measure around 20 to 25 inches.

Once they reach maturity, male hammerheads have an approximate length of 5 to 6 feet, while females have a length of around 7 to 8 feet.

After they have reached sexual maturity, their annual growth rate slows even further.

Fish of around 40 to 45 years come close to this shark species’ maximum length of about 18 to 20 feet.

However, it is essential to remember that these are merely average numbers.

Growth rates, average, and maximum sizes vary and depend on the sharks’ habitat, diet, genetics, food competition, and other factors.

How Old Do Hammerhead Sharks Get?

While it was long believed that hammerhead sharks had a maximum lifespan of 20 to 30 years, more recent studies of captured specimens have shown that they can live much longer.

The results of one study revealed a maximum age of 40 to 42 years for great hammerhead sharks.

Another, even more recent study, which focused on the Northwestern Atlantic Ocean and the Gulf of Mexico, even suggests a maximum age of 44 years.

But as the oldest hammerhead ever recorded could be even older (which you can read about in the next section of this article), a maximum age of around 50 years is likely!

And that assumption is based on the data we have available so far! The oceans remain largely unexplored, and more giant sharks are regularly being spotted and recorded around the globe.

So who is to say how big and old hammerhead sharks really get? From what we know today, we surely can’t, and nature tends to surprise us in the most fascinating and unimaginable ways!

What Is the Oldest Hammerhead Shark Ever Recorded?

Coincidentally, the oldest hammerhead shark ever recorded is the current All-Tackle world record catch from 2006.

Due to its immense weight and the rather unfortunate fact that it had 55 pups in its stomach, the angler decided to donate the hammerhead to a research institute for study.

There, it was taken for a post-mortem examination, which revealed that this specimen had an estimated age of 40 to 50 years.

Even for a giant hammerhead shark like that, such an age is pretty unheard of, especially since scientists had previously estimated their maximum age to be around 40 years.

How Big Do Tiger Sharks Get? (Average and Record Sizes)
← Previous