How Big Do Lake Trout Get? (Average and Record Sizes) 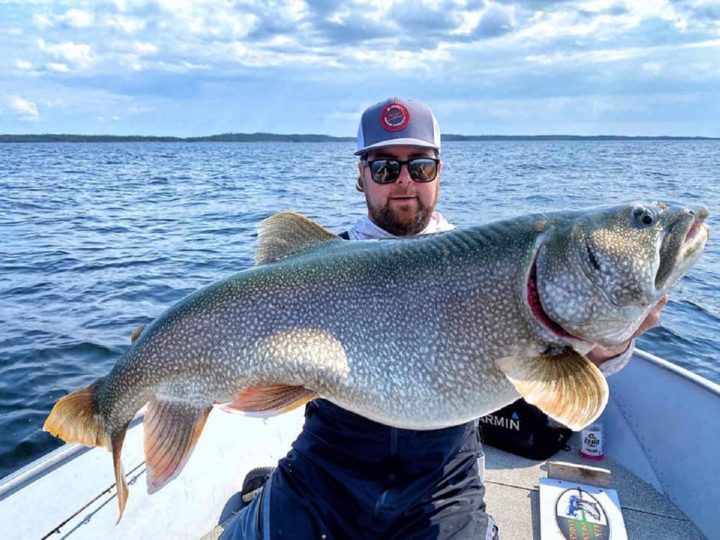 Lake trout are one of North America’s apex predators, and in many lakes, they can even be the biggest predatory fish, outgrowing both northern pike and musky.

I’ve seen pictures of truly enormous lake trout over the years. We’re talking massive fish here! And that got me wondering: how big do lake trout get?

While the average lake trout weighs somewhere between 5 and 15lb and measures a length of about 20 to 30 inches, huge specimens can reach a maximum size of 60 to 80lb and 40-50 inches, and the giant lakers of Northern Canada can be even larger than that.

Keep reading this article and find out how much the biggest lake trout ever caught weighed, how big they can get in the Great Lakes, and how old lakers can get!

What Is the Maximum Size of Lake Trout?

Lake trout (Salvelinus namaycush) are the largest member of the char family and one of North America’s biggest freshwater predators. They can reach incredible sizes of more than 80lb and 50 inches.

Most anglers know that lake trout can get really big, but I don’t believe all of them realize just how huge this fish species can get!

I mean, we’ve all seen pictures of enormous lakers that weighed 30 or even 40lb and measured well over 40 inches. And those are some pretty large fish.

Now imagine a lake trout of 50+ inches with a weight of 60 or more pounds. That’s a real giant in my book!

And the amazing thing is that there seem to be plenty of those monster-like lakers out there.

Of course, lake trout of such prodigious sizes can only be found in the suitable water bodies.

For the fish to reach such a big size, the lake they inhabit has to be very big, very deep, and full of prey fish.

But if all of those conditions are met, lakers that are found in such waters can undoubtedly reach a maximum size of 80lb and 50 inches, or more, as a later section of this article will show!

What Is the Average Size of Lake Trout?

Naturally, most rod and reel-caught fish lake trout will never reach such surreal dimensions. The average size of lake trout in many waters is somewhere between 5 and 15lb and 20 and 30 inches.

Of course, this does not apply to all lakes, and while their average weight could be 15 or 20lb in one lake, it could be around 5lb in another.

Once again, it all depends on the fish’s habitat and the abundance of prey fish.

For example, suppose the number of protein-rich baitfish is low, and the abundance of other predators (such as pike, musky, or bass) is high. In that case, the lake trout in this habitat would probably have a relatively small average size.

On the other hand, lakes in which the lake trout is the sole or top predator and that have an abundant prey fish population might be home to lakers with a much larger average size.

What Is the Biggest Lake Trout Ever Caught?

Now that you know both the average and maximum size of lake trout, it’s time to reveal the unbelievable world record for this species!

The biggest lake trout ever caught is a gigantic fish of no less than 102lb. Two anglers caught it on Lake Athabasca (Saskatchewan, Canada) back in 1961. This behemoth reportedly measured an incredible 60 inches.

Unfortunately, this fish was caught in a gill net, so it’s not a sport fishing world record.

The biggest lake trout ever caught with a rod and reel is a fish that weighed in at 72lb and was caught by angler Lloyd Bull on Great Bear Lake (Northwest Territories, Canada) in 1995.

Interestingly, the world’s longest lake trout has also been caught on Great Bear Lake, which seems to produce plenty of really big lakers.

That fish measured a respectable 52 1/2 inches and was caught by Michael J. Sadar in 2014.

So as you can see, it’s the giant and far-away lakes of northern Canada that are home to the world’s largest lake trout.

How Big Do Lake Trout Get in the Great Lakes?

Lakers can be found in all five Great Lakes and those water bodies are pretty much the best lake trout habitat there is; large, deep, and with plenty of cold and well-oxygenated water.

Consequently, there are big and healthy populations of lake trout here.

Lake Superior seems to hold the largest lakers in the region, and it is here that the biggest Great Lakes lake trout was caught.

How Many Inches Do Lake Trout Grow a Year?

Juveline lake trout have a pretty fast growth rate and can, under optimal conditions, grow between 2 to 4 inches annually.

However, their growth rate slows down considerably once they reach adulthood (7 or 8 years of age).

They commonly only grow an inch or so per year during that stage of their lives.

This reasonably slow growth in adult lake trout also explains the fairly old age that this species can reach.

How Old Can Lake Trout Get?

As lake trout are a relatively slow-growing fish, they can actually reach a really respectable age.

It takes them a good 6 to 8 years to reach sexual maturity, and their average life span is between 10 and 20 years.

That alone is pretty remarkable if you ask me.

But if we look at the maximum age of this incredible predator, we find that it can live longer than 50 years. That’s really old for a freshwater fish species!

Those big old lakers of northern Canada can get even older than that, as fish with an incredible age of 60 years and more have been reported from that part of the world.

What Is the Oldest Lake Trout Ever Caught?

Not much is known about this catch, but the oldest lake trout ever caught had a reported age of 62 years. In a very real sense, that fish was laker grandpa!

Unfortunately, no known length or weight has been registered for this specimen, so it’s hard to say just how big this ancient lake trout really was.

But, if I had to guess, I’d say that there are probably both bigger and, consequently, also older lakers out there in the vast territories of northern Canada.

The only way to find out is to go there and catch one!