How Big Do Muskie Get? (With Average and Maximum Sizes) 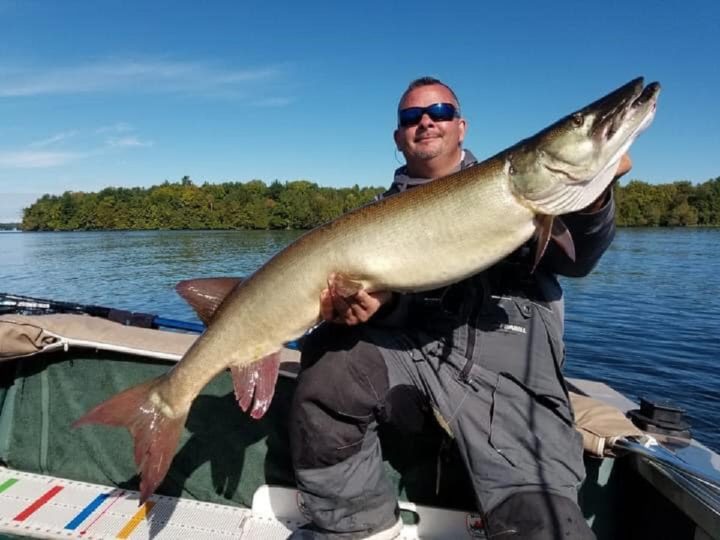 The mightly muskie is one of North America’s biggest freshwater predators and a fish species that can reach impressive sizes.

As I have seen some huge muskies over the years, I wanted to find out how big they can really get.

While the average size of muskie is somewhere between 30 and 40 inches and 10 and 20lb, this large apex predator can reach a length of more than 60 inches and a weight of up to 70lb.

Read on to find out everything there is to know about the size of muskie, including the current world record, at what size a musky is considered a trophy catch, and how old muskie can get.

PRO TIP: Need new gear for the upcoming muskie season? Then check out this quality equipment on Amazon.

It’s very cost-effective, durable, and can handle any trophy musky with ease!

What Is the Maximum Size of Muskie?

The musky (Esox masquinongy) is the largest member of the pike family (Esocidae), and as such, it can reach truly massive sizes.

Under optimal conditions, this apex predator can reach a length of 60 to 70 inches and a weight of close to 70lb.

Of course, fish of such sizes are extremely rare and can probably only be found in few waters in North America.

DID YOU KNOW: According to past references, giant muskies of up to 8 feet and 100 pounds have been caught by commercial fishermen. However, these records are unofficial ones and, if you ask me, probably more legend than reality!

If we instead focus on official records and the various fishing reports of our time, I think most anglers would agree that muskies of 50 to 60 inches and 40 to 60lb can be called really big fish.

But, as I mentioned earlier, not every water has the potential to produce such mega-sized musky. It all depends on various factors that all have to come together in any given muskie habitat.

These can include the following:

Only water bodies that offer the right mix and balance of the above factors may bring forth muskies of truly epic sizes.

Thankfully, though, quite a few waters in both the US and Canada have such potential!

What Is the Average Size of Muskie?

Of course, catching a giant musky isn’t the easiest of tasks, and most anglers will be more than happy to catch an average-sized fish any day of the week.

Sounds big? Well, it is! But you have to remember that the musky is a pretty large-sized fish and one that is not caught easily.

They tend to keep to themselves and often manage to avoid being caught (hence the musky’s nickname “fish of 10,000 casts”).

So if you’re lucky enough to hook up to one, the chances are that it’ll have a decent size!

Of course, the average size will vary from water to water and population to population!

Once again, this will depend entirely on the habitat and the factors mentioned above.

How Big Is a Trophy Muskie?

This is a much-debated question, and the answer most anglers will give you is that a trophy muskie is a fish of at least 50 inches.

A 50+ incher is undoubtedly a fish that dreams are made of, and to many, it’s the ultimate goal in life. I mean, if you’ve managed to locate, hook, and land a muskie of 50 inches or more, you’re good! Period!

With that said, I believe the subject of the trophy size is a) very subjective and b) highly dependent on the water you’re targeting.

If you are fishing on a lake containing muskie of up to 45 inches, a 40 incher could definitely be called a trophy fish if you ask me.

Many anglers will argue that a trophy size is based on the individual species’ maximum size and not on the water you’re fishing.

But I disagree with that statement. Because if your water simply doesn’t contain muskies with a generally agreed-upon trophy size, how could you possibly catch one, right!

And so, if you’ve managed to catch a 40-inch muskie, which is a huge accomplishment in itself, and you want to call it a trophy fish, go right ahead. You’ve earned it, no matter if there are bigger fish out there or not.

What Is the Biggest Muskie Ever Caught?

When you see the various record muskies that have been caught over the years, you get a very good picture of how big they can really get.

It doesn’t happen very often, but every now and then, some angler somewhere in the US gets lucky enough to hook up to a real musky monster.

Cal Johnson was one of those lucky anglers. In 1949, he was fishing on Lake Court Oreilles (Wisconsin) and got the fish of a lifetime.

The musky he managed to land that day still holds the IGFA All-Tackle World Record to this day.

That enormous fish weighed in at an unbelievable 67lb 8oz, and it’s, by far, the biggest musky I’ve seen caught with rod and reel.

I can’t even imagine how Cal must have felt back then!

A potential new All-Tackle Length World Record musky was caught on Mille Lacs in Minnesota in 2021.

Angler Nolan Sprengeler and his buddies were chasing muskies when Nolan suddenly got a bite.

After an intense fight, he and his friends netted a gigantic muskie of 57.75 inches.

That fish, which also crushed the old Minnesota state record, weighed in at an impressive 55lb 15oz.

Another enormous musky and catch of a lifetime!

The question is, are there even bigger fish than those two out there somewhere? Personally, I think the answer is a solid yes!

What Is the Biggest Muskie Ever Caught in Canada?

Ontario is home to huge muskies, and Georgian Bay, in particular, holds plenty of impressively-sized fish.

The current Canadian muskie record is a massive fish of 65lb that was caught in Georgian Bay’s Blackstone Harbour by angler Ken O’Brien in 1988.

That behemoth of a musky measured 58 inches and had an incredible girth of 30.5 inches. What a monster!

And based on the fact that Ontario has produced plenty of 50+ inchers over the years, I’d say the chances for a possible new world record from Canada are pretty good!

How Fast Do Muskie Grow?

The muskie is a fast-growing predatory fish species. Fingerlings can reach sizes of 8 to 12 inches after only a few months and continue to grow rapidly during their first five years.

Male musky mature at around age five, having reached an approximate length of 28 to 32 inches.

On the other hand, females will mature at around age six or seven, having an approximate length of 30 to 36 inches.

The young muskie’s fast growth rate can be explained by the fact that they have a relatively high mortality rate and hence need to grow up fast to survive.

For one thing, plenty of other predators like to gorge on muskie eggs and fry. These can include the following species:

Additionally, musky eggs and fry can be very susceptible to sudden changes in water temperatures, oxygen levels, and turbidity, further increasing their already high mortality rate during the first days and weeks of their lives.

So, quite understandably, for the musky population to remain stable, the few fish that survive that first challenging time need to toughen up fast, as they are the ones that will one day give birth to the next generation of muskies.

PRO TIP: Just want a quick visual summary of this article? Then check out the related web story on musky sizes here!

How Old Can Muskie Get?

The average lifespan of muskies is somewhere between 15 and 20 years, but fish of around 30 years have been caught and documented by researchers.

That is a pretty impressive age for a fish species and explains why muskies can reach such massive sizes.

The fact that they are fierce apex predators that, as an adult, has no natural predators (other than us humans, of course) further explains their extended lifespan.

A versatile and beautifully made medium-heavy 8 to 9′ baitcasting rod that’s perfect for big predators. Has an awesome balance, action, and sensitivity. An excellent musky rod with a dream-like performance!

An affordable, high-performance baitcasting reel with amazing precision. Casts super smoothly and will last you forever! Makes for the perfect muskie combo together with the St. Croix Mojo rod.

One of the best braids available today. Zero stretch, great feel, and immense strength make this line the perfect pick for muskies in both open and snaggy waters. Put on a 65 or 80lb test, and you’re good to go!