How Big Do Pike Get? (With Average and Maximum Sizes) 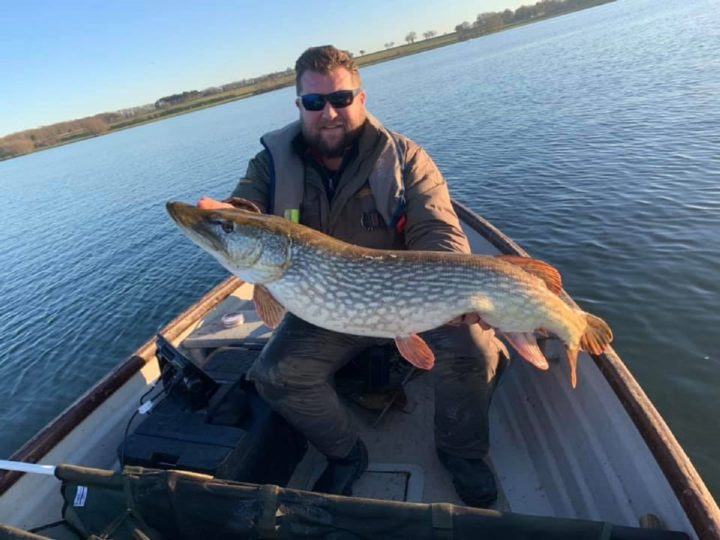 The pike is the ultimate freshwater predator to many anglers, including myself. Their size and incredible strength are simply unbeatable, and there is nothing better than fighting a massive pike on a fishing rod!

But just how big do pike get? That’s a topic I wanted to find out more about, so I started doing some research.

While northern pike have an average length of about 17 to 25 inches and an average weight of 2 to 5 pounds, they can reach lengths of more than 50 inches and weights of 55 to 60lb. European pike are generally somewhat bigger than pike found in North America.

If you want to know just how big pike can get, why Euro pike are bigger than American ones, and how old this fish species can get, all you have to do is keep reading!

What Is the Maximum Size of Pike?

Northern pike (Esox lucius) can get massive, reaching lengths of more than 50 inches and weights of 50 and more pounds.

As an apex predator, pike inhabit and dominate many waters in both the US, Canada, and Europe. And as they sit at the top of the food chain in most of these water bodies, they can often reach impressive sizes.

It is a fact that European pike can get somewhat bigger than their North American relatives, which is something that’ll be discussed in more detail further down in the article.

But no matter if it’s in the US, Canada, or Europe, a pike of 30 incher will almost always be considered a good catch, and a 40+ inch pike is a really big fish.

A 50 incher, on the other hand, can only be called a monster, and pike of that length are extremely rare.

Many years ago, I used to guide tourists and on one trip, my clients and I managed to land a pike of 45 inches. That fish was so long, we could hardly believe it!

When it comes to weights, I’d say that most anglers would agree that a 20 pounder is a highly respectable catch.

A 30lb pike is the stuff of dreams. I know, because i’ve caught a few around 25 and 26lb and am still dreaming about that, to me, impossible 30+lb fish.

And a 40lb northern pike? That is a fish with mythical status for almost any predator angler out there!

What Is the Average Size of Pike?

The average size of northern pike is somewhere between 17 and 25 inches and 2 and 5 pounds.

Of course, those numbers will vary from population to population. But generally, I’d say that most pike anglers around the world would agree with that average.

Being aware of the actual average size of your target fish allows you to have more realistic expectations, especially if you’re new to pike angling.

Nowadays, with the internet, it’s easy to think that you’ll haul in a 20 pounder every time you head out. After all, that’s what most YouTubers are doing, right!

Well, that actually gives you a very wrong picture of pike fishing! Trust me, it’s not that easy, especially if you’re new to the sport.

And so, remembering how big (or small) the average pike actually is, and that most anglers catch sizes like that on most of their trips (even the pros) will help you enjoy your newly found hobby much more.

I caught my first pike now 25 years ago (it measured 17 inches exactly), and even though I’ve caught plenty of big ones over the years, I can still find joy in catching the smaller ones!

Now that we’ve gone through the maximum and average pike size, let’s move on and talk about the world record pike!

According to the IGFA (the International Game Fish Association), the biggest pike ever caught is a fish of 55lb 1oz.

This monster was caught on Lake of Grefeern by famous German angler Lothar Louis back in 1986.

Lothar caught the fish on a smaller spoon and managed to hand-land the behemoth after a brutal 40-minute fight (apparently, he didn’t have any landing net with him that day).

This enormous pike would be the official world record for many years to come.

However, in 2019, a Czech angler named Lukas Matejka claimed to have caught a new world record pike in a big lake system in the Czech Republic.

Weighing in at an insane 58lb 14oz and measuring an unbelievable 52 inches, this huge northern pike would certainly beat the standing world record caught in Germany.

It appears, however, that this record was never made official. I don’t know if the IGFA disapproved it or if the angler just never registered it.

Nevertheless, I am pretty sure that pike of such sizes, and bigger, can be found in the vast water systems of the European continent!

What Is the Biggest Pike Ever Caught in the United States?

You might be wondering, are there even bigger pike in the US? The answer is no, as North American pike tend to be somewhat smaller than their European relatives.

At least when it comes to weight. Length-wise, on the other hand, they can undoubtedly match Euro pike!

The biggest northern pike ever caught in the United States is a fish of 46lb 2oz.

That awesome pike, which angler Peter Dubuc caught in 1940, measured an incredible 52.5 inches.

The fact that this record is over 80 years old shows that it isn’t all that easy to catch record-breaking pike of such sizes in North America.

Why Are Pike Bigger in Europe?

Both the summers and winters, especially in the northern parts of the United States, generally see more extreme temperatures than the seasons in Europe.

Both extremes can and do disrupt the pike’s growth and significantly decrease survival rates among adult pike.

This, in turn, often leads to smaller pike than the one in Europe, which typically does not see such extreme temperatures during summer or winter.

Of course, Scandinavia is a big exception here. Much like Canada or the northern States, this region in Europe can see icy winters. Nonetheless, countries like Sweden or Finland can produce massive pike.

And that’s where the second factor comes in, competition.

While Euro pike really only have one or two other predators to worry about (namely zander and big perch), North American pike often have to share their habitat with numerous other predators such as:

Pike in this region of the world do hence not enjoy the same level of food abundance as the pike in Europe due to the increased predation by other species.

RELATED ARTICLE: Northern Pike vs. Musky (Can They Coexist?)

How Fast Do Pike Grow?

Compared to other fish species, the northern pike is a relatively fast-growing predator, as it can reach a body length of up to 20 inches after only two years of age.

Of course, the pike’s growth speed depends on its habitat (water temperature, water quality, food abundance, competition, etc.), but if we assume that the fish can grow under optimal conditions, the following growth rate can be applied:

DID YOU KNOW: On average, female pike grow 30% faster than male pike.

How Old Do Pike Get?

Most northern pike can reach an age between 7 and 15 years, but very old specimens of more than 25 years have been caught and studied.

Interestingly, several studies have shown that they can get even older in captivity. One example is mentioned by the DNR of Wisconsin, where a northern pike held in captivity reached the incredible age of 75.

I don’t, however, know if that’s an extreme exception or if it’s common for northern pike to reach such an old age in captivity.

How Big Do Walleye Get? (Average and Record Sizes)
← Previous
How Big Do Muskie Get? (With Average and Maximum Sizes)
Next →