How Big Do Rainbow Trout Get (Interesting Fish Facts) 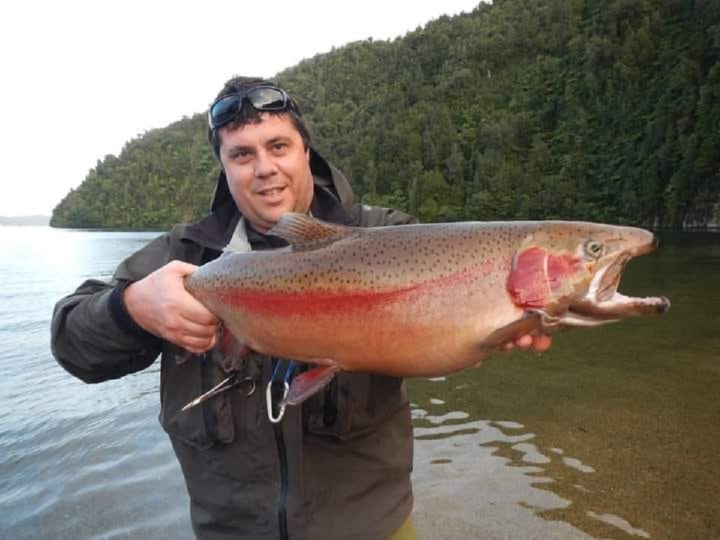 The rainbow trout is an extremely popular species that is found all over the world and targeted by millions of anglers.

They can be found in both still and running water and often reach very respectable sizes. But just how big can rainbow trout actually get?

While the average size of rainbow trout is 15 to 25 inches and 1 to 5lb, this trout species can reach a maximum size of around 40 inches and 35-40lb. Some genetically altered stocks can even produce fish that weigh close to 50lb.

Keep reading this article to find out more about the rainbow trout’s average and maximum size, the current world record rainbow, and how big they can get in other countries around the world.

What Is the Maximum Size of Rainbow Trout?

Wild rainbow trout (Oncorhynchus mykiss) can be found around the globe, as they have been introduced in many countries. However, the native Pacific Northwest populations produce, by far, the biggest wild rainbow trout.

While they can reach a maximum size of around 25 to 30 inches and 15 to 20lb in most other regions of the world, native pacific northwest rainbow trout can grow to an incredible 40 inches and 35 to 40lb.

In fact, a giant rainbow trout was caught in California in December 2021. That behemoth measured an unbelievable 41 inches and had an estimated weight of just over 38lb.

It didn’t qualify for a new Californian state record as the fish was released. Otherwise, it would have smashed the current 37.5 inches and 27lb record.

Of course, even the native stocks don’t teem with giants like that, but if you want to catch an all-natural, wild rainbow, the pacific northwest is the right place for you!

These fish have been made to reach enormous sizes, and while it’s certainly not considered a true sport or challenge by some anglers, others find catching such fish quite enjoyable.

Those “unnatural” rainbow trout can reach a maximum length of around 45 inches and a maximum weight of close to 50lb.

Of course, many of those farm or pond-dwelling fish are being fed with pellets or other high-protein feed, which also explains their unnatural size and body shape (as those fish are usually extremely compact and fat).

The current world record rainbow trout is a perfect example of such fish, which you can find out more about further down in the article. So make sure to keep reading!

What Is the Average Size of Rainbow Trout?

Of course, most of us anglers will never catch a rainbow trout of those dimensions. Instead, most trout anglers will catch average-sized bows, which are, nonetheless, highly sought-after and beautiful fish.

No matter where you are fishing for them in the world, the average size of rainbow trout will be between 15 and 25 inches and 1 and 5lb.

Naturally, many factors will dictate any population’s average size, both underneath and above the surface. Some of them include the following:

And so, a river with optimal conditions in the United States might hold rainbow trout with an average size of 5 or more pounds.

In contrast, a lake with poorer conditions somewhere in Europe might harbor rainbows with an average size of 2lb.

Given this species’ sizeable global distribution, it is natural that its average size will vary significantly from country to country and water to water!

What Is the Biggest Rainbow Trout Ever Caught?

As previously mentioned, the current world record rainbow trout is a genetically altered fish that was made to reach bigger sizes than naturally occurring fish.

This GM “Frankentrout” weighed in at an unbelievable 48lb and was caught by angler Sean Conrad on Lake Diefenbaker (Canada) in 2009.

This monster fish broke the previous world record of 43lb 10oz, which, in turn, was also caught on that same lake.

Both fish have sparked countless debates over the legitimacy of genetically altered fish, and rightly so if you ask me.

Those rainbows escaped from a fish farm in which they were genetically engineered to grow extra-large.

These triploids, as they are called, have been designed with three sets of chromosomes, which make them sterile and allow them to use the energy they save from not spawning for further growth.

So, not only are they unnatural, but they can also reach sizes that no other rainbow trout on the planet is naturally able to reach.

Are they huge fish that can be considered a giant trophy rainbow? Undoubtedly so.

Should they be considered equal to wild and natural rainbow trout (which, by the way, is something the IFGA has not done)? Personally, I really don’t think so!

Are Rainbow Trout Bigger Than Steelhead?

Wild rainbow trout, which only reside in freshwater environments, will almost always be smaller than their anadromous (migrating up rivers from the saltwater) version, the steelhead.

This can be explained by the fact that steelhead have access to much more food while dwelling in the ocean.

The abundance of both baitfish and crustaceans they enjoy during their time in saltwater certainly contributes to their bigger size.

Freshwater-dwelling rainbow trout often simply do not have such an abundance of forage to indulge in.

RELATED ARTICLE: What Do Steelhead Eat? (Preferred Prey and Baits)

Even though the average size of brown trout is somewhat smaller than that of the rainbow trout in many waters, both of these trout species can reach similar maximum sizes.

Like rainbow trout, brown trout can reach a length of about 40 inches and a weight of around 40lb, even though such sizes can be considered extremely rare.

The current world record brown trout is a fish from New Zealand. Caught in 2020, this giant weighed in at an incredible 44lb 5oz.

The longest recorded brown trout ever caught with a rod and reel measured a little over 38 inches and was caught in Wisconsin in 2011.

As you can see, the brown trout’s maximum sizes are pretty similar to those of the rainbow trout, although these browns were wild, unaltered fish!

So, perhaps, natural brown trout grow slightly bigger than rainbows after all.

How Big Do Rainbow Trout Get in Australia?

Unlike their relatives native to the pacific northwest, the introduced rainbow trout in Australia do not grow all that big.

Down Under rainbows have an average size of 10 to 20 inches and 1 to 4lb and a reported maximum size of 28 inches and 20lb.

Furthermore, it is stated that fish over 23 inches and 10lb are relatively rare catches.

How Big Do Rainbow Trout Get in New Zeeland?

New Zealand rainbow trout, which have also been introduced a long time ago, can grow somewhat larger than their Australian neighbors.

It is also stated that weights between 8 and 10 pounds are relatively common.

How Big Do Rainbow Trout Get in the UK?

Having been introduced to the United Kingdom as well, British rainbow trout can actually get quite big, with a maximum size of around 35 to 40 inches and a 30 to 35lb.

However, most of the fish here will have an average size of 15 to 25 inches and 2 to 8lb. Fish of 25lb or more are usually farmed fish that have either escaped their farms or have been caught in designated rainbow fisheries.

The current British record is a perfect example of that, as this rainbow trout of 34lb 12oz, which has been caught on Loch Earn in Scotland, originated from a trout farm on the Loch.

How Fast Do Rainbow Trout Grow?

Wild rainbow trout are relatively slow-growing fish, as it will take them about two years to reach a size of 4 to 6 inches and another two years to get to 10 to 12 inches.

On the other hand, farmed rainbows will grow at a much faster pace. Under the right circumstances, these fish can reach a size of 10 to 15 inches after only one year.

In less than two years, these farmed rainbow trout can reach a length of 20 or more inches and weigh around 6 to 8lb.

This rapid growth is, of course, anything but natural and only occurs because the fish have access to large amounts of high-protein feed.

Additionally, these stocks are often genetically altered, which speeds up their growth rate even further.

How Old Can Rainbow Trout Get?

Like many other trout species, the rainbow trout has a relatively short lifespan.

The oldest reported fish had an age of 11 years, but generally, rainbows reach a maximum longevity of 7 to 8 years, and their average lifespan is between 4 and 5 years.

How Big Do Steelhead Get? (With Average and Record Sizes)
← Previous
How Big Do Smallmouth Bass Get? (Interesting Fish Facts)
Next →