How Big Do Smallmouth Bass Get? (Interesting Fish Facts) 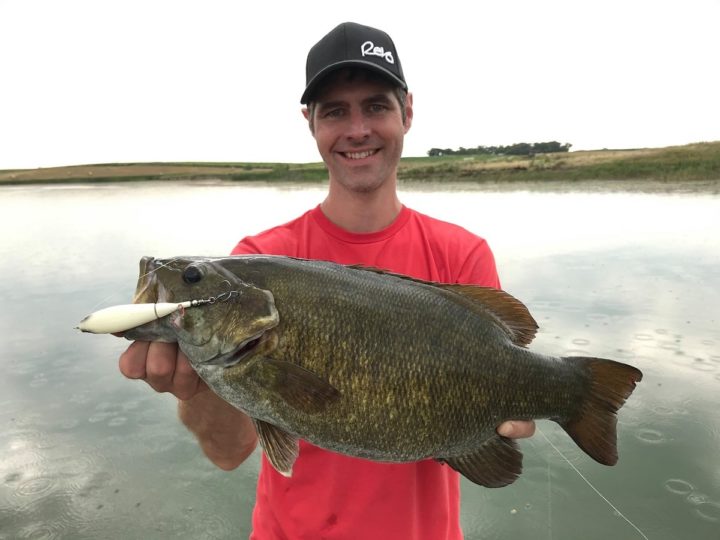 The smallmouth bass is one of North America’s most popular game fish and a species known for its incredible strength and fighting skills.

That’s why many anglers are surprised to hear that this bass actually doesn’t get all that big. But exactly how big do smallmouth bass get?

While the average size of smallmouth bass is somewhere between 12 and 18 inches and 1 and 4lb, they can reach a maximum length of about 28 inches and a maximum weight of around 12lb.

Keep reading this article and find out how big a trophy smallmouth bass is, how much the current world record fish weighs, and if smallmouths grow bigger than largemouths.

What Is the Maximum Size of Smallmouth Bass?

Despite its wide range, truly huge smallmouth bass (Micropterus dolomieu) are hard to find, and not all that many waters have the potential to produce record-sized specimens.

In the waters that do have the right conditions, however, smallmouth bass can reach a maximum length of up to 28 inches and a maximum weight of around 12lb.

But don’t get me wrong, even fish of around 10lb are extremely rare and considered by many anglers to be the catch of a lifetime (or two).

Big smallmouths are not all that easy to find or catch, so the anglers who do manage to hook up to the giants among the smallmouths are usually tremendously proud of their achievements, and rightly so!

I’d say that even fish of around 8lb will be considered huge by most bass anglers out there. It’s that hard to catch really big smallies!

That’s mainly because it’s so difficult to find suitable waters. Ideally, they should hold a large adult population of smallmouth bass and have relatively low fishing pressure (good luck finding these, am I right!).

Additionally, the water body should also have the right conditions that allow the smallmouth bass to grow bigger than in other waters. Such conditions can include:

As the chances of locating such waters are not that high, most anglers will instead catch average-sized smallmouth bass.

What Is the Average Size of Smallmouth Bass?

The average length of smallmouth bass in most waters is somewhere between 12 and 18 inches, while their average weight is between 1 and 4 pounds.

Again, this will depend on the respective water you’re fishing in and on the presence or absence of the right conditions for the smallmouth bass population that water holds.

A lake somewhere in northern Minnesota, with poor conditions and long, harsh winters, might hold smallmouths with an average size of just 10 to 12 inches and 0.5 to 1lb.

On the contrary, a southern lake in Tennessee, with perfect conditions, lots of forage, and short, mild winters, might produce smallmouth bass with an average size of 15 to 20 inches and 2 to 5lb.

Again, it all depends on range, water conditions, and the health and strength of the bass population living there.

How Big Is a Trophy Smallmouth Bass?

According to most anglers, a trophy smallmouth bass has a length of 20 to 22 inches and a weight of 5 to 6lb.

The fact that no universally set size can, once again, be explained by different waters and varying populations and their top sizes.

If you’re targeting smallies in a lake that holds bass of up to 7 or 8lb, I’m pretty sure that most of you would find that a 20 incher of 5 pounds is, in fact, a trophy smallmouth bass!

But if you’re fishing on one of those lakes with huge smallmouths of over 10lb, maybe the trophy size for that particular water will start at 22 inches and 6lb.

If you ask me, defining what a trophy fish is and what isn’t should be a personal and subjective choice!

I mean, it’s your catch, right? So you should be allowed to call it a trophy, if you so please! Again, that’s just my humble opinion as an angler myself!

What Is the Biggest Smallmouth Bass Ever Caught?

The world record smallmouth bass is an ancient catch that dates back to 1955.

Considering that behemoth’s size and how hard it is to catch such giant smallmouth bass, it really isn’t much of a surprise that this record hasn’t been crushed yet!

The fish, caught by angler David Hayes on Dale Hollow Lake (Tennessee), weighed in at an unbelievable 11lb 15oz.

That is a truly huge smallie! I mean, a 12-pound largemouth is quite an impressive catch. Imagine how it must have felt to net a smallmouth bass of that size.

Undoubtedly the fish of the century!

Do Smallmouth Bass Get Bigger Than Largemouth Bass?

Even though these two bass species are the largest members of the black bass family, smallmouth bass are considerably smaller than largemouth bass.

While they have similar maximum lengths, with smallmouths reaching a length of about 28 inches and largemouths a length of around 30 inches, largemouth bass can weigh much more than smallmouth mass.

As stated above, the maximum weight of smallmouths is about 12lb. On the contrary, fully-grown largemouth bass can reach maximum weights of more than 20lb.

In fact, the current world record largemouth bass is an enormously fat fish of 22lb 4oz.

So, largemouth bass are undoubtedly the heavy-weight champions of the black bass family.

How Fast Do Smallmouth Bass Grow?

The smallmouth bass is a relatively slow-growing fish, as it can take 3 to 5 years for it to reach a size of 10 to 15 inches.

However, during its first year, this bass species is actually growing at a much faster rate, as it will often already have a size of 5-8 inches.

After that, the growth rate slows down somewhat, and after reaching maturity (typically at age 4 or 5), the fish will continue to grow at this slower rate.

How Old Do Smallmouth Bass Get?

The average lifespan of smallmouth bass is between 7 and 12 years, but their maximum age depends on their range.

In southern waters, where the forage is abundant, seasons are longer, and temperatures are higher, the smallmouth’s growth rate is often accelerated.

Here, they typically reach a maximum age of 9 or 10 years.

In northern waters with shorter seasons, colder temperatures, and often less-abundant food sources, the bass will grow slower and hence get older.

Such waters can hold smallmouth bass with a maximum age of 15 to 18 years.