How Big Do Steelhead Get? (With Average and Record Sizes) 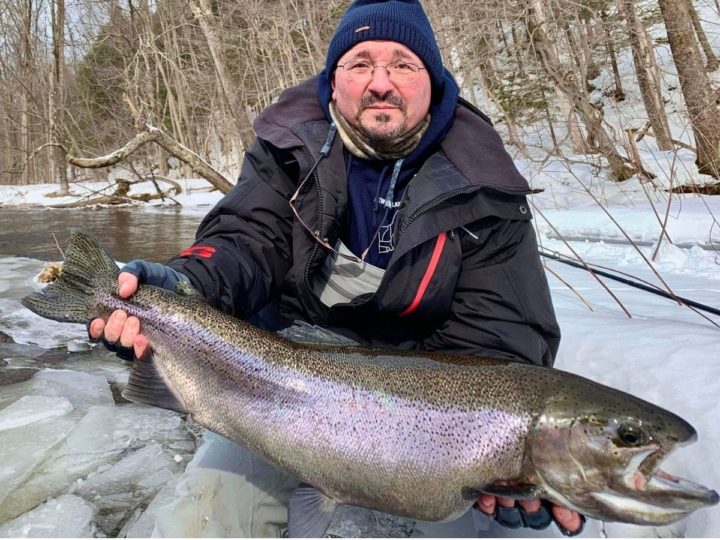 The steelhead is one of North America’s most popular trout species, and every year, millions of anglers try to catch themselves a trophy steelhead.

But what is a trophy-sized steelhead anyways, and how big can steelhead really get? I wanted to find some answers and researched the topic extensively.

Keep reading this article and learn more about the world’s biggest steelhead, how big they can get in the Great Lakes, and how fast steelhead can grow.

What Is the Maximum Size of Steelhead?

For the native anadromous steelhead populations of the Pacific Northwest, which tend to produce the biggest steelhead in North America, it is not uncommon to reach sizes of more than 40 inches and 20lb.

The region also produces several 30+ pounders, even though they have become rarer these days.

Fish that reach the species’ absolute maximum size of 45 inches and 40lb are extremely scarce.

Only very few steelhead of such enormous sizes have been caught over the years, and virtually all of them were caught by commercial fishermen.

In most other regions of the continent, steelhead have a maximum size of around 40 inches and 20 to 25lb.

Of course, there are always exceptions to any rule, and no one knows where or when a lucky angler might catch a giant 40 pounder. I am sure there are more out there than most of us imagine!

Most trout anglers will, however, catch average-sized steelhead, which will be discussed in the next section of this article. So make sure to keep reading!

What Is the Average Size of Steelhead?

In most river systems, steelhead will have an average size of somewhere between 20 and 30 inches and 4 and 10lb.

Naturally, though, as they can be found in so many waters in both the US and Canada, both average lengths and weights often vary greatly.

Several factors play an essential role here and will dictate the average (and maximum) size of a steelhead population. These can include the following:

And so, while the average size of steelhead in a large river system (e.g. the Columbia River in Washington) can be around 10lb, a tiny stream or tributary in, say, New York might hold fish with an average size of 4lb.

A very interesting aspect is the one about hatchery vs. wild steelhead, as their respective size can vary quite significantly in many rivers.

Let’s take a closer look at this one, shall we!

Interestingly, hatchery-raised steelhead often have some physical advantages over wild fish, which, more often than not, results in both more, stronger, and often also bigger fish.

The most significant difference in size seems to be present during the fish’s smolt stage.

One reason for this is that hatchery steelhead are often genetically modified to raise their chances of survival in the wild.

They can adapt faster and better to their habitat, are able to feed more effectively, and generally have a better immune system and metabolism.

Another is the hatchery itself, as it is a controlled and very safe environment for the smolt to grow in.

However, as they grow older and live in their natural habitats, hatchery and wild fish seem to reach, more or less, similar sizes.

Most likely, that is because they tend to have the same habitat use and feeding behavior.

What Is the Biggest Steelhead Ever Caught?

There is no official IFGA All-Tackle World Record for steelhead, as steelhead isn’t a species on its own, but instead just an anadromous version of the rainbow trout.

Nevertheless, there are quite a few impressive unofficial world record catches can be found on the internet.

Supposedly, the biggest steelhead ever caught with a rod and reel is a giant fish that was caught off Bell Island (Alaska) back in 1970.

8-year-old angler David White thought he had caught a salmon, but a few days after the catch, both a taxidermist and a couple of fisheries professors confirmed that the fish David had managed to land was, in fact, a giant steelhead.

This fish measured an unbelievable 43 inches and weighed in at 42lb 3oz.

However, with a weight-to-length ratio like that, it’s no wonder that this catch has never been made official and has been the topic of countless debates over the years.

It seems too huge to be true, but it’s an awesome story nonetheless, I think!

Another unofficial steelhead record is a fish that was caught on the Kispiox River (British Columbia, Canada) by angler Chuck Etwart in 1954.

This 36-pound steelhead was caught while trolling for salmon.

The longest steelhead ever caught appears to be a fish that angler Jeff Wissing caught on the Quinault River (Washington) in 2004.

That massive fish measured 46 inches (!) and had an impressive 24 inches girth.

What a majestic steelhead that fish must have been! And unlike David White’s fish, this one definitely seems like a realistic record! Don’t you think?

How Big Do Steelhead Get in the Great Lakes?

While having an average weight of about 6 to 10lb, the adfluvial steelhead populations of the Great Lakes can reach a maximum length of 35 to 40 inches and weigh more than 20lb.

With their many productive tributaries, Lake Michigan and Lake Ontario tend to boast the biggest steelhead in the Great Lakes region.

The biggest steelhead ever caught in the Great Lakes was a superb fish that angler Bill Fuhs (A.k.a. Big Fish Bill) managed to catch on the Manistee River (a Lake Michigan tributary) back in 2013.

That massive steelhead measured 36 inches and weighed in at an impressive 21lb 3oz.

RELATED ARTICLE: Where Is the Best Steelhead Fishing in Michigan?

How Big Is a Trophy-Size Steelhead?

Many anglers will agree that a trophy steelhead starts at a length of 40 inches and a weight of about 20lb.

However, I think that a trophy size can actually differ from river to river!

Because, if you’re fishing a river that simply doesn’t hold fish of more than 20lb, how in the world are you supposed to catch a trophy steelie, right!

Sure, you could just travel to some of the best producing rivers in the pacific northwest and net yourself a “true” trophy fish, but not all of us have the time, money, or will to do so!

And I think that a trophy size is a very individual thing that anglers should be free to define for themselves, especially young people and beginners.

So if you’re catching a 15lb fish on a river that produces steelhead of up to 20lb or so, then that fish can definitely be called a trophy steelhead, at least in my book!

And it’s not like a 15lb steelhead is a small fish anyways, am I right! On the contrary, that fish is a unique and respectable achievement, no matter where you caught it!

RELATED ARTICLE: Steelhead Fishing in New York (Everything You Need to Know)

How Fast Do Steelhead Grow?

It takes steelhead approximately two years to reach a length of around 8 inches, which is when they’ll start to head out to the ocean or Great Lakes.

This means that the steelhead is a relatively slow-growing fish compared to other fish species.

But once again, their growth rate depends on various factors (as listed further up in the article).

Under optimal conditions, hatchery-raised steelies might reach a length of 8 inches after only one year.

On the other hand, wild steelhead young that live in a habitat with poorer conditions might need as much as three years to reach that same length.

After that initial slow-growth period during their smolt stage, steelhead will, however, grow much faster and can reach a size of about 20 inches and 5-6 pounds by the age of 4 or 5.

How Old Can Steelhead Get?

The oldest recorded steelhead had an age of about 11 years. As these fish were also very close to the species’ maximum size, it can be assumed that they cannot get much older than that.

And so, when compared to other fish species, the lifespan of the steelhead is relatively short.

They will spend their first one to two years in freshwater before heading out to the ocean (if they can, in fact, reach saltwater) or the Great Lakes.

Here, they will spend another two to three years before reaching maturity and returning to their natal rivers and streams to spawn.

After that first run, they will return to the same river or stream every year until they die.

How Big Do Muskie Get? (With Average and Maximum Sizes)
← Previous
How Big Do Rainbow Trout Get (Interesting Fish Facts)
Next →