How Big Do Striped Bass Get? (Average and Maximum Sizes) 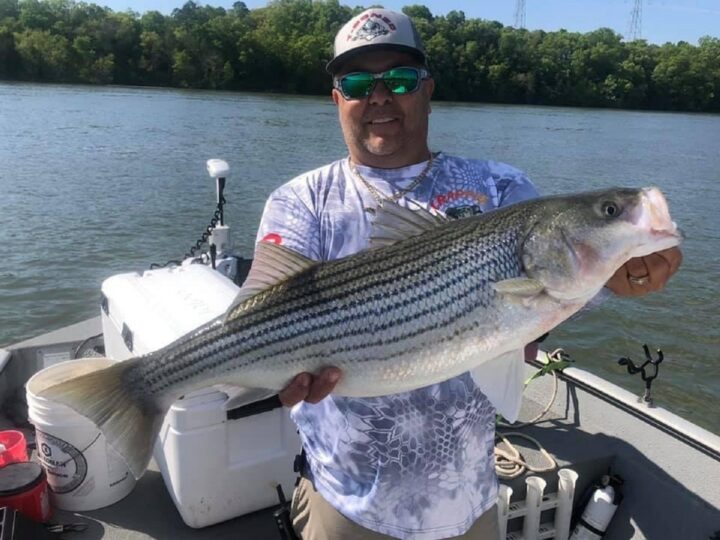 No matter where along the Atlantic east coast you might fish for them, striped bass are an immensely popular target fish that can grow to enormous sizes.

Given its popularity, I wanted to find out more about the length and weight of these fantastic fish and decided to write this article.

While striped bass have an average size of about 25 to 35 inches and 10 to 20lb, they can reach a maximum length of up to 60 inches and a maximum weight of about 120lb. A trophy striper starts at a weight of around 20 to 30lb.

Keep reading this article to find out more about the varying sizes of striped bass, how fast they grow, how old they get, and what the current world record striper weighs.

What Is the Maximum Size of Striped Bass?

The striped bass (Morone saxatilis) is an anadromous (living in saltwater and spawning in freshwater) fish species found along North America’s Atlantic coast.

As most members of the temperate bass family, stripers are relatively large fish that can reach a maximum length of about 50 to 60 inches and a maximum weight of around 90 to 120 pounds.

So even though you might think of smaller fish species when you hear the word bass, striped bass are the complete opposite!

Fish over 50lb are more common than one would think, and big specimens get caught in saltwater and freshwater environments.

Its enormous size partly explains its popularity as a game fish.

Imagine hooking up to a 50inch monster of around 60lb in a coastal tributary somewhere. That, dear reader, spells fun!

What Is the Average Size of Striped Bass?

The average size of most caught striped bass is somewhere between 25 and 35 inches and 10 and 20lb.

As they are so abundant along the east coast, the average sizes of striped bass vary significantly.

Some populations produce plenty of smaller fish, while others produce bigger specimens and have a bigger average size.

So, some angler communities might mostly catch fish of 10 or 15lb, while others perhaps see plenty of 20 or 30-pounders.

And then there’s always the possibility of smaller or bigger fish!

Maybe you’ve never fished for this species. Or perhaps you just hit a bad spot and hence “only” catch 5 pounders.

But this doesn’t mean you won’t catch bigger fish once you’ve improved your fishing skills or found a better spot!

Just don’t get discouraged by any average or maximum sizes! We all have to start somewhere.

Where Are the Biggest Striped Bass Caught?

While you can theoretically catch big stripers almost anywhere, a few saltwater and freshwater destinations clearly stick out when it comes to monster striped bass.

In the ocean, that would be Cape Cod (Massachusetts) and the Long Island Sound (Connecticut).

In fact, the current world record striped bass was caught in the Long Island Sound (more on that further down in the article).

Some of the best locations can be found down in Texas when it comes to big striped bass in rivers.

The Brazos, the Guadalupe, and the Rio Grande are three legendary big striped bass destinations here.

Other well-producing river systems further up north include:

What Is the Biggest Striped Bass Ever Caught?

The topic of record striped bass is an exciting one! There is one official world record and two unofficial ones that never got registered.

Let’s start with the official IFGA All-Tackle Word record, then!

This fish is a relatively young world record, as it was caught in 2011.

As mentioned above, the biggest striped bass ever was caught in Long Island Bay off the coast of Connecticut.

Angler Gregory Myerson was lucky enough to hook and land a behemoth striper of an unbelievable 81lb 14oz.

Bigger specimens have been caught in nets (as you’ll learn shortly), but for a fish caught on a rod and reel, this is definitely a worthy world record if you ask me!

Now to the unofficial and netted records.

First off is a fish caught by an angler in Chesapeake Bay in 2005. It measured an incredible 53.5 inches but was, unfortunately, never weighed.

State biologists estimated the weight to be between 70 and 90 pounds!

Scientists researching Chesapeake Bay caught a giant striped bass in one of their nets ten years earlier, back in 1995.

That fish had an insane weight of 92 pounds!

And finally, the biggest striper ever caught by commercial fishermen.

In 1892, two commercial fishermen from North Carolina recorded a striped bass of no less than 125 pounds in one of their nets.

It would be truly incredible to catch a 100+ pounder on a rod and reel one day! There are out there, and the current world record will surely be beaten one day!

How Big Is a Trophy Striped Bass?

Once again, this discussion depends on where you’re fishing.

Generally speaking, trophy stripers in areas with somewhat smaller fish start at around 20lb and 35 inches, while a trophy striped bass in regions with bigger fish is a catch of at least 30lb and 40 inches.

As stated above, this fish species can reach enormous sizes. But let’s be honest; most anglers will never catch such monster fish.

And so, I think trophy sizes of 20 or 30lb are both fair and very realistic for most waters and anglers.

Unless that is, you’re a beginner! Then, virtually any personal best can be considered a trophy fish.

Celebrate all your catches and records. That’s always been my philosophy as an angler.

How Heavy Is a 30-Inch Striped Bass?

Now we move on to some comparative statistics. Many anglers wonder about the weight of specific fish lengths, so I wanted to include the following sections in the article.

Obviously, there’s no one-size-fits-all (pun intended), but in optimal conditions, a 30-inch striper should weigh between 13 and 15 pounds.

How Heavy Is a 40-Inch Striped Bass?

40-inch stripers generally enter the heavy-weight category, and if we, once again, assume fish living in optimal conditions, such a length would result in an approximate weight of 28 to 32 pounds.

How Heavy Is a 50-Inch Striped Bass?

A striped bass of this length is a really giant fish, and any angler in the world can consider himself both very lucky and highly skilled if they manage to catch such a monster!

Striped bass of 50 inches typically weigh between 55 and 60 pounds.

How Fast Do Striped Bass Grow?

Stripers are extremely fast-growing fish, reaching a respectable length of about 12 inches after the first year.

At age two, they can reach a length of about 16 inches and around 20 inches at age three.

When striped bass are five years old, their average length is 25 inches.

At age ten, stripers will have grown to as much as 35 inches, which is an incredible growth rate if you think about it!

DID YOU KNOW: Researchers have found that striped bass grow fastest at a water temperature of about 75 to 77F. On the contrary, their growth rate drops to almost zero at temperatures of 92F or more.

How Old Do Striped Bass Get?

Despite their incredible size, striped bass can only reach an age of 25 to 30 years. In the world of fish, however, that’s still pretty old.

The average lifespan of stripers is 8 to 12 years, meaning that most fish will reach a maximum size of about 32 to 40 inches and 15 to 28 pounds.

DID YOU KNOW: Almost all striped bass above the age of 12 and a length of 40 inches are female!

How Old Is a 30-Inch Striped Bass?

How Old Is a 40-Inch Striped Bass?

Following the same logic, striped bass with a length of 40 inches would be 12 or 13 years old.

How Old Is a 50-Inch Striped Bass?

And finally, a 50-inch striper, living in optimal conditions, would be around age 17 or 18.

How Big Do Bluegill Get? (With Average and Record Sizes)
← Previous
Best Salmon River Fishing Reports (For Salmon and Steelhead)
Next →