How Big Do Tiger Sharks Get? (Average and Record Sizes) 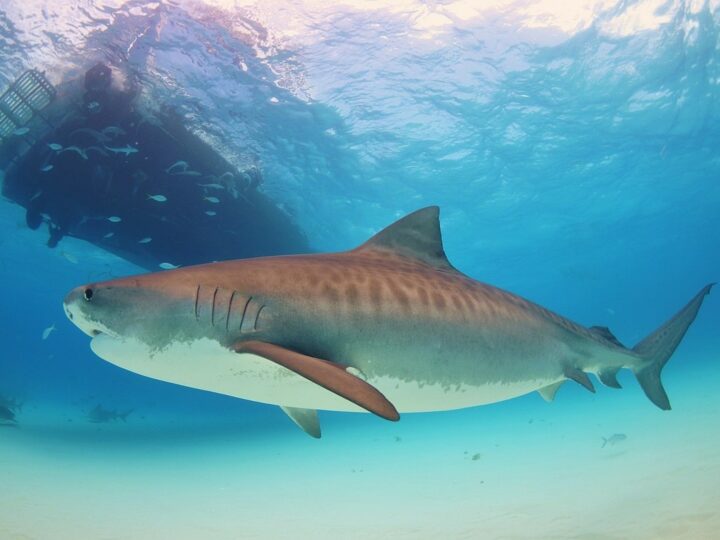 Tiger sharks are one of our oceans’ biggest apex predators. These sharks have a majestic appearance and can reach very respectable sizes.

As I find sharks extremely fascinating, I wanted to find out just how big tiger sharks can get. So I did some extensive research, contacted a group of researchers, and wrote this article.

While the average size of tiger sharks is between 8 and 12 feet and 500 to 1,000lb, these predatory fish can reach a maximum length of 18 feet and an approximate maximum weight of 2,000lb.

Keep reading this article to find out more about these giant ocean hunters and learn fascinating facts about the biggest tiger sharks ever recorded.

What Is the Maximum Size of Tiger Sharks?

Tiger sharks (Galeocerdo cuvier) are the world’s second-biggest predatory shark species. Only great white sharks are bigger than them.

While the internet is plastered with reports and claims of tiger sharks of more than 20 feet and 3,000lb, practically all of these are either unconfirmed or simply old fishermen’s tales.

Specimens of 16 to 18 feet are extremely rare, even though fish of 18 to 20 feet could be out there.

But as you’ll find out further down in the article, to this day, the biggest confirmed tiger sharks measured around 18 feet and did not exceed 2,000lb.

So, records that include astronomical 24 feet and 3000+ pounds are a bit of a stretch!

How Big Is the Average Tiger Shark?

Of course, these numbers do vary based on the sharks’ habitat and genetics!

In areas with colder water and less food abundance, the average size of a tiger shark might be 6 to 8 feet and 300 to 500 pounds.

On the contrary, tiger sharks that are found in habitats with warmer water temperatures and plenty of prey may have an average size of 10 to 12 feet and 800 to 1,000 pounds or more.

This is especially important to remember as tiger sharks inhabit so many waters worldwide, and their numbers are steadily rising.

Where Are the Biggest Tiger Sharks Found?

Tiger sharks inhabit most tropical and subtropical coastal areas around the world.

Fish of all sizes can be found between North America and Brazil, the Gulf of Mexico and the Caribbean Sea, and off the coasts of Africa, Japan, China, Indonesia, New Zealand, India, and the Pacific Islands.

However, some regions in the world seem to have higher concentrations of bigger tiger sharks.

A great variety of factors can explain this:

In recent years, the creation of marine protected areas and shark sanctuaries, in which commercial fishing for sharks is prohibited, has also contributed to larger concentrations of big tiger sharks.

One curious example are the waters around Norfolk Island, a beautiful island located southeast of Sydney (Australia).

Here, researchers have observed what is believed to be one of the world’s largest aggregations of big adult tiger sharks.

While the Pacific Ocean in this part of the world has a lot to offer naturally, the island community’s large-scale offal disposal appears to be one of the main factors behind this phenomenon.

Norfolk Island has an extensive livestock population, and plenty of organs and guts go into the sea on a regular basis.

This accidental chumming has produced a large number of enormous, well-fed tiger sharks off the island, as most specimens that have been measured and tagged by various research teams measured 13 feet or more.

What Is the Biggest Tiger Shark Ever Caught?

There are two official IGFA All-Tackle world records for the species tiger shark. One was caught off the coast of South Carolina in 1964, and the other, more recent record, off Australia in 2004.

The International Game Fish Association lists them as a tie, but they’re not, as the Australian catch from 2004 is a little bigger!

Walter Maxwell’s tiger from 1964 is undoubtedly the more famous of the two. Plenty of news stories and fishing sites have covered his record catch over the years.

That’s right; Walter caught that behemoth of a tiger shark from a pier! That’s pretty wild if you ask me!

This impressive catch was the official world record for many years. Until Australian angler Kevin James Clapson came along and broke it!

From all I know, he was fishing from the beach, making this second world record tiger shark catch as incredible as the first!

Clapson shark, caught off a beach in Ulladulla (Australia) in 2004, weighed in at an impressive 1785lb 11oz.

And while it’s a mere 5lb 11oz heavier than Maxwell’s tiger shark, it’s still a heavier weight and should be considered the new official All-Tackle world record.

But as it turns out, the International Game Fish Association has a few really questionable rules regarding record weights.

Apparently, a new record fish has to be at least 0.5% larger than the current record, meaning that Clapson’s tiger shark would have needed to weigh 8lb 14 oz (1788lb 14oz) more than Maxwell’s record shark.

But as it “only” weighed 5lb 11oz more than the current record, it wasn’t approved by the IFGA, and instead, they listed both fish as a tie.

That’s very weird, and the association should definitely revise that rule!

RELATED ARTICLE: What Is the World’s Biggest Hammerhead Shark?

What Is the Biggest Tiger Shark on Record?

Researchers and fishermen have observed many big tiger sharks. Over the years, plenty of fish between 10 to 15 feet have been spotted, caught, and tagged for further studies.

But there is one giant tiger shark that beats them all!

It’s an enormous and round specimen that a research team discovered in the Pacific Ocean in a shark sanctuary off French Polynesia in 2018.

Kori Garza, a marine biologist, first laid eye on the giant, and as this fish hadn’t been seen or tagged before, she named it “Kamakai”.

Kamakai has an estimated length of 18 feet, which is really big for a tiger shark, considering that the biggest ever recorded specimens before here measured around 15 feet.

Furthermore, this female tiger shark is around 9 to 10 feet wide (from fin to fin), giving her a truly jaw-dropping appearance.

As she is alive and well in the wild, no one can put an exact weight on her, but given her immense size, researchers have estimated that she could weigh between 2,000 and 2,500lb.

Tiger shark vs. great white shark is an exciting question and debate! Both are huge shark species that can reach respectable lengths and weights, but which of the two is the bigger shark type?

As far as weight goes, the great white is, by far, the heavier of the two.

Great whites can reach maximum weights of 5,000lb, possibly even more. Tiger sharks, on the other hand, rarely go beyond 2,000 pounds.

That’s because white sharks are a lot more compact and heavier built than tiger sharks.

Length-wise, it’s a different ball game! While we can only base our comparison on the data that is available today, we can assume that these two giant shark types can roughly reach the same body length.

The reason for that is that tiger sharks are almost all tail. So even though they are lighter than great whites, they can become extremely long.

The largest estimated tiger sharks have lengths of 18 to 20 feet, while the biggest great white sharks on record measured 20 to 22 feet.

Sure great whites are a little longer, but who knows how big these things can really get?

Recently, scientists have observed gigantic mega tiger sharks of about 20 feet in the South Pacific.

These behemoths have been spotted in marine protected areas and no fishing areas full of prey. Both tiger and great white sharks have found a regular buffet in those areas, resulting in ever greater sizes.

And as we still know so little of our oceans, chances are that there are even bigger specimens of both species out there somewhere!

RELATED ARTICLE: What Is the Biggest Great White Shark Ever Recorded?

How Fast Do Tiger Sharks Grow?

Contrary to past studies, tiger sharks are one of the fastest-growing shark species on the planet.

At birth, the young can already measure 1,5 to 5 feet. By the time they are one year old, juvenile tiger sharks have an average length of around 5 feet.

At the tender age of 5, well-fed tiger sharks can already have a length of 8 to 11 feet, and by the time they reach sexual maturity (at age 7 or 8), they can measure around 12 feet.

Once they reach maturity, though, their growth rate slows considerably to around 2 to 5 inches per year.

Do Tiger Sharks Grow Faster in Cold or Warm Water?

Tiger sharks are warm water-loving animals that are most abundant in tropical and subtropical coastal regions.

Studies suggest that their preferred water temperature range is around 70 to 75F.

Here, they appear to both grow and swim faster than in colder waters.

A greater abundance of food sources can explain the tiger shark’s enhanced growth rate in such areas.

Their metabolic rate is linked to that perfect temperature range and a higher swimming speed, meaning they have a healthier appetite and can hunt more effectively in such waters.

Interestingly, but not surprisingly, recent studies have also shown that tiger sharks have started to migrate further up north in recent years, primarily due to climate change and the warming of the oceans.

Whether or not this behavior will negatively affect the world’s tiger shark populations remains to be seen. But one thing is for sure; they are expanding their range.

Perhaps, they are simply reclaiming the territories that rightfully belong to them!

How Old Do Tiger Sharks Get?

Little is known about the maximum age of tiger sharks, as the global population is so large, and researchers haven’t been able to observe and study all that many specimens.

The data that has been collected thus far gives us an estimated average lifespan of 10 to 20 years and an approximate maximum age of 40 to 50 years.

Studies have also revealed that female tiger sharks generally get older than males.

Females have a maximum lifespan of at least 40 years, while it is around 35 years for their male counterparts.

But again, bigger and older tiger sharks are probably out there somewhere in our oceans, making it only possible to be sure about this species’ maximum age once more fish are studied and caught and more data is collected.

When Do Bluegill Spawn? (Times, Temperatures, Locations)
← Previous
How Big Do Hammerhead Sharks Get?
Next →