How Big Do Walleye Get? (Average and Record Sizes) 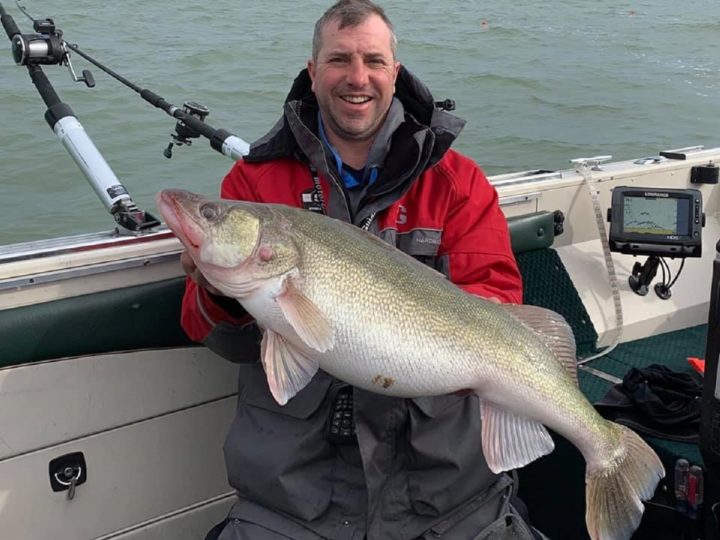 The walleye is both an extremely popular gamefish and a fascinating predator, and millions of anglers regard catching a trophy-size walleye as a highly respected achievement.

But how big do walleye actually get? And when is a walleye considered a trophy fish?

While the walleye’s average size is between 12 and 20 inches and 1 and 3 pounds, they can reach maximum lengths of around 35 inches and weights of 20 to 23lb. The current world record walleye is a much-debated 25lb giant.

Continue reading to get all the facts on the maximum size and age of walleye, and learn everything there is to know about the biggest walleye ever caught.

What Is the Maximum Size of Walleye?

The walleye (Sander vitreus) is the largest member of the North American Percidae family and outgrows all of its relatives and cousins, such as the perch, sauger, and saugeye.

It’s also one of North America’s top freshwater predators, even though most of the other ones outgrow the walleye.

And even though your garden-variety walleye is usually not that big, this species can reach pretty impressive sizes!

Under the right conditions, fully-grown walleye can reach lengths of 30 to 35 inches and weights of 20 to 23lb.

Of course, such record weights may only be reached by pre-spawn female walleye, as their eggs will add to their overall body weight.

It’s also important to remember that not many waters have the capacity to produce such colossal fish!

Many factors can play a significant role in the maximum size of walleye:

So, it really depends on the lake or river you’re targeting. But if your walleye water has what it takes, you can potentially hook up to a real giant!

What Is the Average Size of Walleye?

Of course, most anglers will catch average-sized walleye, as they are commonly the most abundant in any given walleye population.

The average length of walleye is somewhere between 12 and 20 inches, and their average weight is between 1 and 3lb.

Naturally, though, these numbers will also vary based on the walleye’s respective habitat and its conditions.

For example, in lakes with a fairly significant walleye population, the fish tend to stay somewhat smaller due to the increased competition by other walleye.

In such waters, the average size of walleye is perhaps only 10 to 15 inches and 0.5 to 1.5lb (even though there will probably also be larger fish around).

On the contrary, in lakes or rivers with a smaller walleye population and a rich abundance of baitfish and other food sources, and with few or no other top predators, the average walleye may measure 20 to 25 inches and weigh between 3 and 6lb.

In the latter example, you’ll probably also find quite a few trophy-sized fish, as the conditions of their habitat allow them to exist.

But how big does a walleye have to be called a trophy fish? Head over to the next section of this article and find out!

What Is a Trophy-Size Walleye?

You’ve probably heard anglers talk about trophy walleye. Maybe you’ve even been lucky enough to catch one or two yourself! But how big is a trophy-size walleye anyway?

Well, once again, the answer depends on the water you’re fishing on.

Some people will argue that there’s a general size for trophy eyes, no matter where you fish. But I tend to disagree with that argument!

Not all waters produce the same size of walleye, but every one of them will contain fish that are simply bigger than the rest of the population in that habitat. In my opinion, those can be called trophy walleye!

So, once again, if you catch a 10lb walleye in a lake where 95% of the anglers catch fish of perhaps 3 or 4lb, you’ve caught yourself a trophy eye in that water!

Similarly, if the lake you’re targeting contains plenty of big walleye between 20 and 30 inches, but you manage to catch a 30+ incher, well, then that would surely be considered a trophy catch!

I think it’s always better and more fun to compare your record catches to the average size of fish in the water you’re fishing, rather than to compare your walleye to fish that have been caught in entirely different environments!

It’s just not fair! Neither to you nor the awesome fish you’ve managed to catch!

What Is the Biggest Walleye Ever Caught?

While a few walleye of 35 or more inches and around 25 pounds have reportedly been caught, almost all of those monstrous fish were caught with nets, not with a rod and reel!

Those ancient creatures must be very intelligent beings, and it’s probably very difficult, or even impossible, to catch them with a lure or bait!

But a few highly skilled anglers have managed to catch some huge eyes over the years!

The current world record fish is an example of that, even though it must be said that this record catch is a much-debated one. For decades, doubts have been voiced over its size, and in the mid-90s, the International Game Fish Association even disqualified the fish.

However, in 2019, the IGFA decided to reinstate the record based on newly found photographic evidence.

So, whether true or not, for now, that fish is the officially approved world record walleye.

The biggest walleye ever caught is a gigantic fish of 25lb. That’s incredibly big for a walleye!

That phenomenal fish measured an insane 41 inches, which is pretty much unheard of when it comes to this fish species.

It was caught back in 1960 by angler Mabry Harper on Old Hickory Lake (Tennessee, USA).

The fact that this record hasn’t been broken in over 60 years shows you how difficult it must be to catch such large-sized walleye.

It’s perhaps also the reason that so many anglers and experts out there doubt the size of the mythical Mabry Harper walleye. Who really knows, right?

Studies have shown that in over 80% of fish species, the females grow bigger than the males, and the walleye is no exception to this rule!

Male walleye only reach a maximum length of about 25 inches, which means that every walleye that is larger than 25 inches (which also means most trophy fish) is, in fact, female!

Of course, there are always a few exceptions to that rule, although really massive male walleye of more than 25 inches are extremely rare.

PRO TIP: During the spawning season, it’s very easy to tell the difference between female and male walleye. The females will be both bigger and fatter, and, of course, full of eggs!

Why are female walleye larger than male ones, you ask? Well, the answer is actually pretty simple!

For one thing, female fish tend to be somewhat less aggressive and less active, meaning they can store much more energy, which they can use to grow bigger.

Additionally, evolution has made female fish bigger to carry more eggs to keep the population strong and abundant.

RELATED ARTICLE: Walleye vs. Sauger (How to Tell Them Apart?)

How Fast Do Walleye Grow?

Both male and female walleye will grow 3-5 inches during their first 5 to 6 years. Once they reach maturity, their growth rate slows down to about 1 to 3 inches per year.

Once again, several external and internal factors will determine their average annual growth, and growth rates between different populations and habitats can vary greatly.

It’s also important to remember that female walleye grow faster than their male counterparts, which means that the 20 incher mentioned above would be an 8-year-old female and a 10-year-old male walleye.

A study from 1999 further supports this fact, as the researchers sampled and studied two 16-year-old walleye; one male and one female.

While the male fish had a length of 23.5 inches, the same-aged female walleye had a total length of 28.1 inches.

So, female walleye grow both bigger and faster than males!

How Old Can Walleye Get?

Male walleye have an average life span of 10 to 15 years, while that of female walleye is 15 to 20 years.

However, even older specimens have been reported!

According to the Minnesota DNR, the oldest Lake of the Woods walleye was 23 years old and measured 30.3 inches.

The oldest walleye ever recorded has had an incredible age of 29 years, which is really, really old for this species.

And I bet there are even older walleye somewhere out there! Somebody just has to catch them!

When Do Muskie Spawn? (Times, Temperatures, Locations)
← Previous
How Big Do Pike Get? (With Average and Maximum Sizes)
Next →