How Can You Tell If a Tench Is Male or Female? 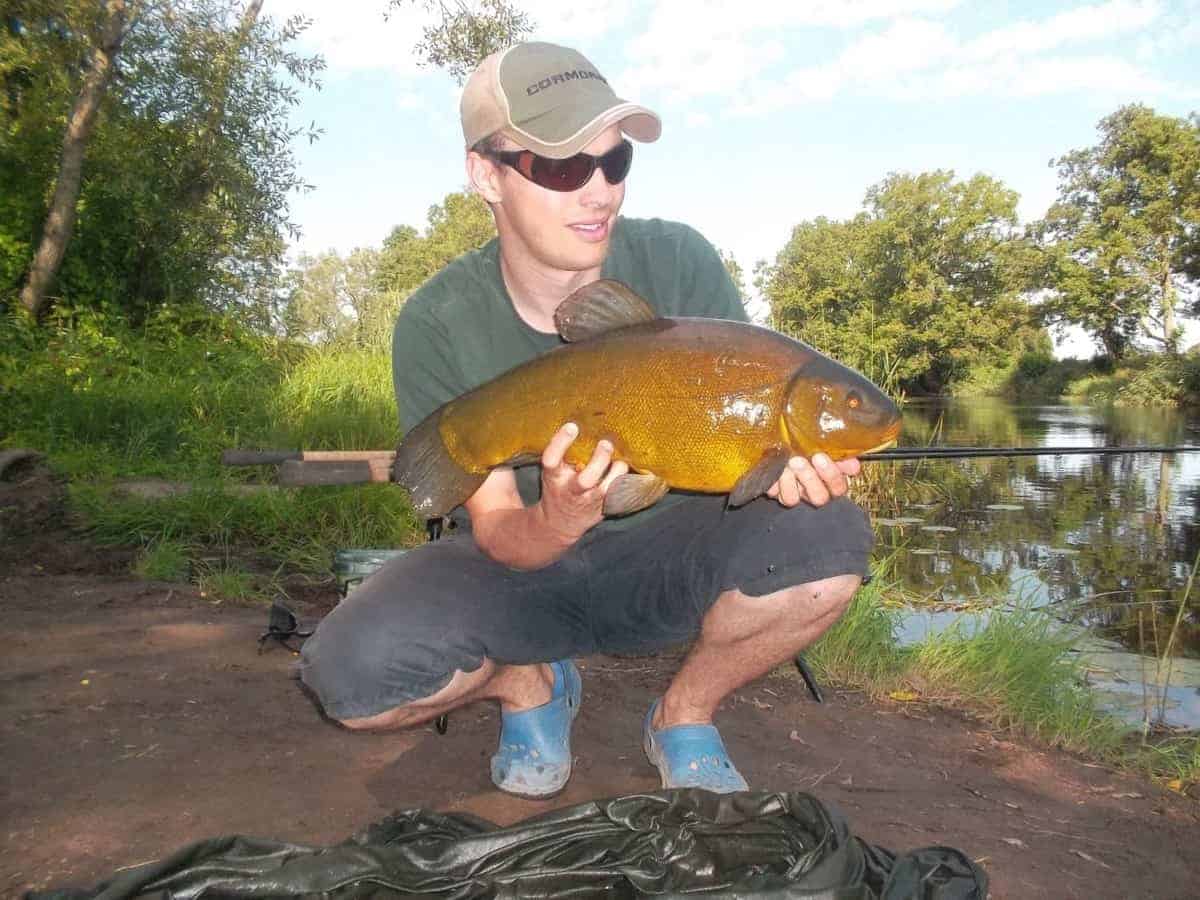 Tench are definitely one of my top 3 species to catch! People often wonder how you can tell the difference between a male and female tench. If you know where to look, it is actually pretty easy to figure out.

Tench are one of few freshwater species that show very distinctive gender characteristics. Female tench are commonly bigger and have smaller pelvic fins than their male counterparts. Male tench can be identified by their rather large, scooped pelvic fins, as well as a knuckle close to the root of their fins.

Continue reading this article if you want to know more sure ways to tell if a tench is male or female, as well as some other fascinating facts about this mysterious fish.

Differences Between Male and Female Tench

Male tench are the ones that really stick out, visually. You can easily tell them apart from females by their large, spoon-like pelvic fins.

In some cases, they can have fins that are extremely large and curled up, which makes you wonder how they manage to swim with those fins.

Another typical characteristic of male tench is their knuckles close to the root of their pelvic fins. These knuckles are actually muscles, and they can grow quite immensely.

As they are found on the males’ belly, the entire underside of the male tench can appear quite uneven and somewhat curvy.

The males’ backs can also be rather elevated and “Quasimodo-like”. All in all, they just look a little out of proportion, which is a feature the females do not share with the males at all.

On the contrary, the female tench are very beautiful looking creatures. Their bodies are shaped close to perfection and every catch the fisherman makes is a true joy to the eyes.

RELATED ARTICLE: Check out this helpful article on the fine art of specimen tench fishing

As so often in the world of fish, tench females are almost always bigger than males, which, of course, is preferred by most fishermen seeking to catch heavy tench.

It is however pretty difficult to use weight alone as an indicator, as there have been caught very big male tench as well!

A majority of tench above 8-9 lbs are female, but males of that caliber have been caught, even though they are pretty rare. This is why you have to look for the other features, in order to be able to tell the difference between male and female tench.

Insider tip: You can determine the gender by the way the tench fight on the rod!

Male and female tench can also fight differently when you have them on. This is not a 100% sure way of telling the difference, of course, but there is a definite general pattern here!

Quite naturally, males will often fight more aggressively than females. If the fish is swimming hither and thither, making wild runs into every possible direction and feeling “jumpy” on the rod, it’s most likely a male tench you got on!

On the other hand, females, especially the larger and heavier ones, will also make escapes and runs, but theirs are simply more coordinated and calmer.

If you have a female tench on, more likely than not, it will give you a heavy, but controlled and more “cruising” kind of fight. There are exceptions to this on both ends, of course!

RELATED ARTICLE: By the way, make sure to read this related article on everything you need to know about fishing for tench at night

Tench have very specific characteristics and you can easily tell them apart from their bigger cousins, the carp. For one thing, tench are most commonly olive-green or slightly brown in color.

They have a very shiny, almost glowing-like skin color, which adds to this species’ extreme beauty.

Tench have very small scales that are embedded in their rather thick skin. They almost look as though they do not have any scales on their bodies at all.

This also explains why tench are extremely slippery fish that can be hard to handle on land.

Another feature of the tench is their very red eyes. This makes the tench a rather mysterious and mythical-looking fish. I know of no other freshwater species that has red eyes.

When you catch a tench and these intense and magical eyes stare at you, it is as if they are a window into another world or dimension. And if you ask me, they probably are!

Yet another very distinctive characteristic of the tench is their enormous and powerful tail fins. Often, they are almost perfectly straight-edged and square-shaped.

This gives the tench enormous strength, something that you soon realize when a tench has taken your bait. They are great fighters on the rod!

RELATED ARTICLE: Read this article if you need some inspiration regarding tench rods

Is Tench a Carp?

While not a carp per se, the tench belong to the same family as the carp, called the cyprinids. As tench are significantly smaller than carp, they could be called the carp’s smaller cousins.

So, it’s mostly the very far family ties and the body shape that somewhat reminds of a smaller carp that makes the tench relate to the carp. They are by no means the only ones though, as the cyprinids are made up of more than 3.000 species.

They also share some geographical similarities with the carp, as the Tinca tinca (the tench’s Latin name) can be found all over Europe, Eurasia and even in the Eastern parts of Asia.

RELATED ARTICLE: Speaking of carp, make sure to read this related article if you want to know the difference between mirror and common carp

How Big Do Tench Get?

Tench can grow well over 10 lbs and fish of that weight are not that uncommon, actually. But most fish you are going to catch will probably weigh anything between 4 and 9 lbs. Personally, I think that tench above 8 lbs are extremely big and decent fish!

The British record tench, which appears to be the biggest tench ever caught officially in the whole of Europe, weighed an astonishing 15 lbs and 3 oz (6.91 kg).

This tench can undoubtedly be called a monster fish! It was caught in 2001 in a venue called Sheepwalk Big Pit, by a coarse fisherman called Darren Ward.

There appears to be an even bigger tench, also coming from British waters, but it was never officially recognized as a record (possibly because the location of the catch was never disclosed). That fish had a weight of an unbelievable 16 lbs 10 oz (7.54 kg).

The world’s biggest tench, which however wasn’t caught with a rod, weighed in at 18 lbs 12 oz (8.5 kg). This enormous fish was netted in a fish farm somewhere around Bulgaria or Croatia.

Of course, the fact that it came from a fish farm makes it somewhat less exciting, as this tench most likely was fed with a tremendous amount of fish pellets.

RELATED ARTICLE: Head over to this article if you want to know the very best baits for tench fishing

Why Are Tench Called Doctor Fish?

This is an old name for tench, dating back to a time when modern medicine was a distant dream and people had to basically come up with their own medicine and remedies for various diseases.

So, at some point, someone had the idea of using a tench’s slime to cure illnesses. And here is why.

Tench have a very thick layer of highly protective slime, which at some point in history achieved medicinal status when people started to believe in the myth that all injured fish in a lake would rub themselves against the tench to heal their wounds.

The logical conclusion people drew was that the slime could heal human illnesses as well. And so for centuries, people used tench, and its slime, to heal themselves. Tench could apparently be used in all sorts of ways:

The live tench on the forehead is definitely something I would have liked to see, had I lived in those days. Hence, as the tench had more healing power than any physician or medicine, it was called doctor fish.

Apparently, even nowadays many people still call it that.