Lake Trout vs. Rainbow Trout (How Are They Different?) 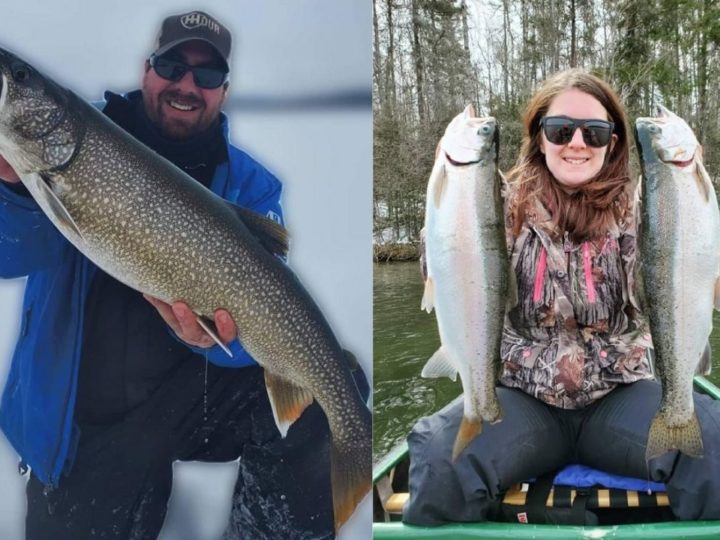 There are plenty of waters in North America that contain both lake trout and rainbow trout and telling these two species apart is not always the easiest of tasks. So, in order for you to be able to correctly identify your catch, I decided to do some research and write this helpful guide on the interesting topic of lake trout vs. rainbow trout.

Keep reading this article and find out more ways of telling the difference between lake trout and rainbow trout.

Are Lake Trout and Rainbow Trout the Same?

While both fish share certain features, bodies of water, and belong to the family of Salmonidae, lake and rainbow trout are actually two totally different species.

Technically speaking, lake trout (Salvelinus namaycush) don’t really belong to the trout family but belong to the wider species of char. Char and trout have very different body colorations, which is the best way of telling the difference between the two species. This feature will be explained further down in this article.

The rainbow trout (Oncorhynchus mykiss), on the other hand, is a “true” trout species. And while both lakers and rainbow trout share the same class, order, and family of fish (salmonids), they have two completely different genus and species types. Hence, they are not the same fish at all.

But that fact alone won’t help you identify your catch on the water, will it? For that, we will have to take a closer look at the actual physical characteristics of both species. So let’s do it!

I wanted to cover this feature first because it simply is the best and surest way of telling the two fish species apart. If you keep the very apparent difference in body coloration in mind when fishing, you won’t ever have a problem identifying your catch!

As lake trout are char, their bodies will always be dark and have light or white spots.

On the contrary, rainbow trout will have a light body coloration, that ranges from gray to silver or even a washed-out blueish green, with dark spots.

Additionally, rainbow trout have something on their flanks that’ll almost always give them away. No, it’s not a rainbow flag. Instead, they will have a broad, reddish stripe along their lateral line on both sides.

Pro Tip: Additionally to their red stripes, most rainbow trout will also have red gill plates.

If you remain unsure, you can also check the size of your caught fish. Of course, this feature only applies to bigger fish, which is something to keep in mind.

The average length of lake trout is 25 to 40 inches, while it can reach a maximum length of more than 50 inches.

Rainbow trout simply do not get as big, as their average length is between 20 and 30 inches and their maximum length is around 40 to 45 inches. Such a length is however very rarely reached, and usually, they remain much smaller.

RELATED ARTICLE: What Is the Biggest Lake Trout Ever Caught?

Similarly to length, weight is another factor that can help you tell the difference between adult lakers and rainbow trout.

The average weight of lake trout is 10 to 20lb, while they can reach a maximum weight of 40 to 60lb. However, some specimens have weighed in at over 100lb. Those are extremely rare, but they’re out there!

The average weight of a rainbow trout, on the other hand, is between 2 and 8lb, and they can reach a maximum weight of more than 40lb. Once again, such weights are extremely rare and most fish do not go much over 20lb.

So, if you’re fishing on a river and hook up to a trout, it cannot be a laker!

In lakes, it’s often the depth that will separate the two species! Lake trout can be found at great depths of between 60 and 200 feet and tend to stay away from the shallow and surface areas of a lake.

On the contrary, rainbow trout are most commonly found in shallow areas near the shore, or just below the surface in open water.

That’s why most anglers catch lakers from a boat and many rainbow trout fishermen catch their fish from the shore.

Where Can You Find Lake Trout?

Lake trout are mostly found in the northern parts of the US and in Canada. They have also been introduced into parts of Europe, South America, and Asia.

I know of a very healthy and robust population of lake trout in northern Scandinavia, to name one example outside of the US and Canada.

In North America, they are widely distributed between northern Canada and Alaska, and New England and the Great Lakes basin in the northern parts of the US.

RELATED ARTICLE: Make sure to also check out this informative article if you want to know the difference between lake trout and splake.

Where Can You Find Rainbow Trout?

While the rainbow trout is native only to water systems in North America, its value as both a food and game fish has led to a worldwide introduction of this species.

Today, rainbow trout can virtually be found all over the globe, from the lakes and rivers of Europe and Asia to the Pacific slope of North America from Alaska in the north down to northern Mexico in the south.

Rainbow trout are also farmed commercially in many places around the world. They can be found in thousands of recreational fishing ponds, as well as countless fish farms in various countries, where they most commonly end up as fish pellets for other species.

Their large-scale global introduction has also led to negative effects on other species. This is the reason why they are included in the list of the top 100 globally invasive species.

What Is the Biggest Lake Trout Ever Caught?

The world record lake trout is a real giant of 72lb that was caught by angler Lloyd Bull in 1995 on Great Bear Lake in the Northwest Territories (Canada).

Funnily enough, an even bigger lake trout was caught on the same lake in 2017, weighing in at an incredible 83lb. Unfortunately, though, this fish was caught using a net.

But if you’d want to catch a new world record laker, Great Bear Lake seems to be a good choice of water!

RELATED ARTICLE: What Are the Best Online Fishing Stores in Canada?

How Big Is the Biggest Rainbow Trout Ever Caught?

The biggest rainbow trout ever caught on a rod was a fish of 48lb. It was caught in 2009 by angler Sean Konrad on Lake Diefenbaker (Canada).

It appears that Canada is the place to go for any kind of trout world record, eh?

Can You Eat Lake Trout?

You can certainly eat lake trout. It’s a delicious and healthy food fish that can be prepared in several ways. It has a very mild fish taste and goes well together with all types of seasoning.

Especially younger fish under 10lb are great eating and can be enjoyed both cooked, pan-fried, grilled, or baked in the oven.

RELATED ARTICLE: What Types of Food Do Lake Trout Eat?

Rainbow trout is a really delicious fish that’s served in many restaurants all over the world. It has very lean and buttery meat that doesn’t have much “fishy” taste to it.

A grilled or pan-fried rainbow trout with potatoes and a little lemon juice sprinkled over it is something to die for. Trust me, I’ve eaten it myself on several occasions. Simply delicious!

9 Best Online Fishing Stores (A US Guide)
← Previous
Lake Trout vs. Splake (How to Tell Them Apart)
Next →