Lake Trout vs. Splake (How to Tell Them Apart) 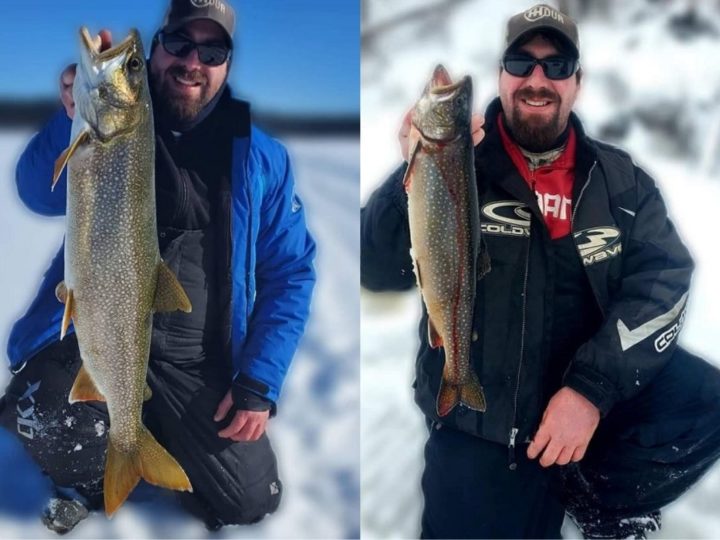 It can be fairly difficult to tell the difference between a lake trout and a splake, and not just merely because splake are partly lake trout! Both look fairly similar and often occur in the same waters. It’s not a surprise then that many anglers get confused about their catch!

Splake are both smaller, slimmer, and darker than lake trout. Lake trout have a pointier tail fin that is more deeply forked than that of the splake. Dead fish can also be accurately identified by the number of appendages on their intestinal tract, as splake have fewer than lakers.

If you want to know all the sure ways of telling these two trout species apart, all you have to do is keep reading this article!

What Is the Difference Between Lake Trout and Splake?

In order to understand the difference between lake trout and splake and to know what to look for in each species, the first thing we must cover is their similarities.

Splake are a hybrid between a female lake trout and male brook trout and resembles both parent species fairly closely. The name derives from the combination of speckled trout (another name for brook trout) and lake trout (sp-lake).

It is due to the genetically stable hybridization that the splake is so hard to tell apart from both lake trout and brook trout. But, if you know what features to look for, it’s not at all impossible to accurately identify your catch!

One of the best ways of telling the difference between a laker and a splake is by checking their body coloration. As the splake’s color generally resembles that of the darker brook trout, its body coloration will hence most commonly be darker than the lake trout’s.

Of course, water turbidity plays an important role here. And if you’re fishing waters that hold splake of a lighter color, you’ll have to check for other features instead!

This isn’t the easiest characteristic to focus on, but sometimes, it can still help you identify the fish you’ve caught. The splake’s body shape is somewhere in between that of the heavier and deeper lake trout and that of the slim-bodied brook trout.

However, many splake tend to be shaped more like their brookie parent, meaning that their body shape is somewhat slimmer and more streamlined than that of the lake trout.

Checking the shape of the tail is another good way of checking whether you’ve caught a laker or a splake.

The tail fin of the lake trout is deeply forked, while the splake’s tail, once again leaning more toward the brook trout’s, is only slightly forked and not as pointy as that of the lake trout.

This is a fairly obvious difference, but only when it comes to bigger fish. Like most fish hybrids, splake do not grow as much as their parent species.

RELATED ARTICLE: What Fish and Baits Do Lake Trout Eat?

This is, by far, the most accurate way of telling the two trout species apart, but the fish will have to be dead! So, if you decide to kill your catch and take it home with you, you can count the number of intestinal appendages when cutting it open.

Appendages are the small, worm-like extensions on the fish’s intestinal tract right after the stomach. All salmonids have them and they are fairly easily spotted in the opened-up fish.

Splake don’t have as many of them as lake trout do. More precisely, splake only have around 65-85 of them, while the lake trout, which is the bigger of the two parent species of the splake, most commonly has between 120 and 180 appendages.

This is a fairly big difference that practically always holds true. Hence, it’s a very accurate way of identifying your trout catch!

PRO TIP: Get the visual quick fact sheet of this article in the related splake vs. lake trout web story here!

How to Fish for Lake Trout?

Lake trout can be caught on both the jigging, trolling, and ice rod.

When vertical jigging for lakers, try to match the hatch using jigs or softbaits that look like the lakers’ food sources (being minnows, smelt, or juvenile whitefish). One such lure is the Berkley Power Minnow. This is a really popular and highly effective softbait that has caught plenty of big lake trout! You can find it on Amazon right here.

For trolling, many anglers successfully use gang trolls, which include several spinners tied to a leader. The rotating spinner blades mimic a small school of fish, which the lake trout naturally hunts after. Amazon’s got a super-effective gang troll lure that you should definitely check out!

If you tip your gang troll with a small minnow, you can increase your chances of hooking up to a laker even further!

When ice fishing for lake trout, both tube rigs, and lipless crankbaits are great choices that can catch you a ton of fish.

The Rapala Rippin Rap in particular is a truly awesome ice lure for lakers! Its noisy rattling that causes vibrations underwater will get the attention of any nearby predator! Check out this killer ice fishing lure on Amazon here.

How to Catch Splake?

All of the above-mentioned fishing methods, meaning vertical jigging, trolling, and ice jigging, work very well for splake as well.

Additionally, common fishing methods for brook trout in shallower water, such as using smaller inline spinners or slip bobber rigs with worms or small minnows, are very effective for spring and fall splake as well!

Pro Tip: Need to read up on how to rig a slip bobber? Then check out this related article!

Is Splake Good to Eat?

Unlike many other hybrid fish species, splake are actually very good eating! In fact, their meat tastes delicious and manages to combine the best flavors from lake and brook trout.

If you’ve caught a splake, you should definitely consider bagging it, your stomach will thank you!

You can both cook, fry, smoke, bake, or grill splake. No matter which, the taste will most likely be phenomenal!

Can You Eat Lake Trout?

Lake trout is a very common and popular food fish in both the US, Canada, and Europe.

It has a stronger fish flavor than other species to it, but if prepared the right way, lake trout can make for a very fine meal!

Like most trout fish, lake trout goes together very well with butter, garlic, lemon, and herbs and can be both grilled, baked, or fried.

RELATED ARTICLE: What Time of Year Do Lake Trout Spawn?

How Big Is a Big Lake Trout?

Lake trout can grow to prodigious sizes and fish of more than 20 or 30lb aren’t that uncommon at all. For most freshwater species, such a weight would be considered really big, but for lakers, we’ll have to take it up a notch!

The number most anglers can probably agree on would be 40lb. Now, in some waters, a 20lb laker is a real giant, while in others, predominantly in Canada, such a weight is more the norm than the exception!

A 30lb laker is a really good fish, let’s not kid ourselves! But it is a true giant? Not according to most lake trout anglers.

On the other hand, a 40 plus pounder is a really big lake trout in anyone’s book! If you’ve hooked up to such a fish and actually manage to land it, well, then you’ve definitely reeled in a monster lake trout!

What Is Considered a Big Splake?

Given that splake can reach a maximum weight of only 20lb, any fish that weighs more than 10lb can be considered a trophy fish.

Especially so, since specimens of more than 10lb are fairly rare. So, if you’ve caught yourself a 10lb+ splake, Kudos to you, that’s a really big fish!

All images courtesy of Andre Charron

Lake Trout vs. Rainbow Trout (How Are They Different?)
← Previous
Trout Teeth (Interesting Facts and Awesome Pictures)
Next →