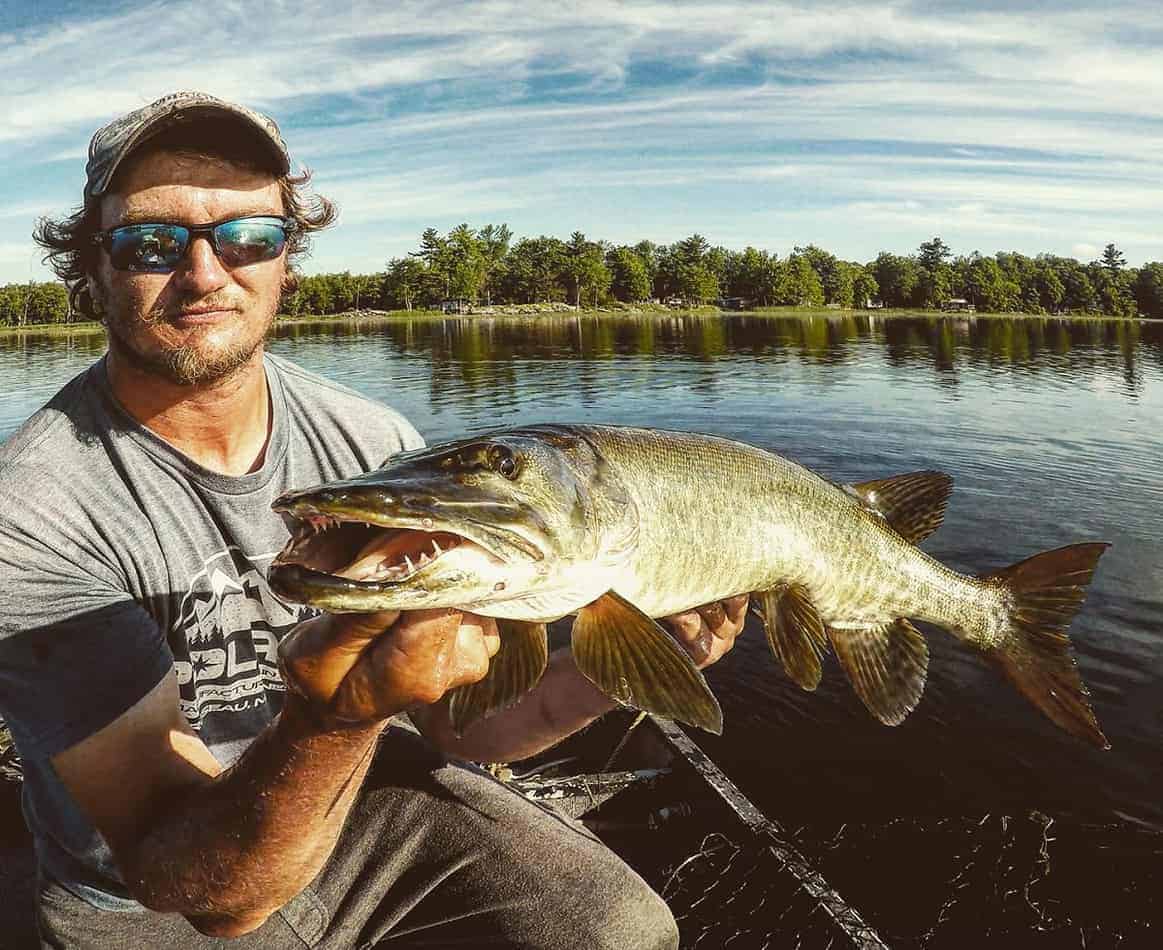 Muskies are one of North America’s most fascinating and popular freshwater fish. And as they can be very hard to catch, they have a certain mysticism surrounding them.

Muskie teeth in particular are a very interesting and somewhat frightening topic, which is why I decided to write an in-depth article about them.

Musky have very large mouths filled with razor-sharp teeth. They have both bigger canines and smaller needle-like teeth. An adult muskie can have between 500 and 700 teeth in its mouth. The biggest of these can be up to 1 inch in length.

If you want to find out more about this mysterious apex predator and its teeth, all you have to do is to continue reading this article.

Pro Tip: When fishing for musky, a strong wire leader is an absolute must if you want to prevent bite-offs. A solid titanium wire leader of 30-40lb is optimal for big muskies and their sharp teeth. Check out a top-quality leader on Amazon here.

How Many Teeth Do Muskies Have?

All in all, a muskie can have anything between 500 to 700 teeth of varying sizes in its large mouth. However, larger specimens are said to have even more teeth and an exact number is hence very difficult to estimate.

The vast majority of these teeth are very small and needle-like ones and can be found both on the musky’s tongue and on the roof of its mouth.

The musky’s pads of small teeth are angled inward somewhat and prevent prey fish from ever getting out of that terrifying mouth again. They also help turn the fish so that it can be swallowed head-first.

These small, brush-like teeth are razor-sharp and their pad-like surface cuts and shreds through anything that gets too close to it.

The muskie’s larger fang-like teeth are tightly positioned along its lower jawline, as well as somewhat more scarcely on the roof of its mouth.

These bigger teeth, for which the musky is so known, are its main hunting tool and are used to grab a hold of a prey fish. When those jaws snap shut and the musky’s big teeth make their way into the prey fish’s flesh, it’s game over.

RELATED ARTICLE: Check out this article for valuable tips on how to catch muskie at night!

How Big Are Muskie Teeth?

This is one aspect of the muskie teeth mysticism as no one really knows how big the teeth can really grow.

On average, the musky’s bigger teeth can grow to a length of 1/4-3/4 of an inch, with a reported maximum length of 1 inch, found in the mouths of a few very large specimens.

But there are fishermen who claim to have caught muskies with even longer teeth that measured more than an inch, which is a rather frightening size if you ask me.

And as the teeth grow together with the musky, one can only imagine how long the teeth of the biggest of these predators that roam the depths of the Great Lakes must be.

On the other hand, the small teeth of the musky are usually only between 1/8 and 1/16 of an inch. Instead of size, their strength lies in numbers.

RELATED ARTICLE: Want to see even more big, sharp, and scary fish teeth? The check out this interesting article on salmon teeth as well!

Do Muskies Lose Their Teeth?

Muskies do not lose or shed all their teeth, but rather only lose the occasional tooth due to age, feeding, or violent spawning behavior.

That muskies, much like northern pike, shed all of their teeth at once is surprisingly widespread folklore, or myth, which however is not supported by any scientific findings or statements.

The teeth that the musky does lose or that break off are usually replaced by new teeth that grow, given that the fish is healthy and not too old.

Sick and/or old fish with only a few or no teeth at all do get caught from time to time though, which could explain the origin of the myth about muskies shedding their teeth.

RELATED ARTICLE: Read this article if you want to know more about walleye teeth and see some great toothy walleye images!

Can Muskies Bite Through Braid?

Muskies will have a very easy time biting through braided line, which is why you should always use a leader when fishing with braid for muskie.

The musky’s super sharp smaller teeth will cut through that braid like butter. This type of material can simply not withstand the muskie teeth’ cutting action or abrasion. There is absolutely no question about that fact!

And so, while it is a very suitable choice for different types of lures, you should only use it as your mainline and in combination with either a wire leader or a very thick fluorocarbon leader.

RELATED ARTICLE: Check out this article to learn more about wire and fluorocarbon leaders for muskie fishing

Can Muskies Bite Through Fluorocarbon?

Here, the answer is partly yes; they can bite through fluorocarbon line, but it really depends on how thick the fluorocarbon is.

Many muskie anglers use thick fluorocarbon leaders very successfully and seldom experience any bite-offs at all.

Of course, we are talking about leaders that are at least 0.80-1.0 mm in diameter. Such diameters certainly reduce the risk of bite-offs, but it must be said that it is, by no means, guaranteed that you won’t lose the occasional fish nonetheless.

Pro tip: Make sure to frequently check your fluoro leaders for weak points and switch to a new one if there is any indication of abrasion and always use quality leader material. You can find my go-to fluorocarbon leader on Amazon here.

Muskies can certainly be dangerous to humans if they get bitten by them. The teeth of the muskie can cause a lot of damage to an angler’s hand that tries to unhook a lure inside the musky’s mouth.

Many fishermen have been bitten by musky that way of lost a substantial part of their hand’s skin. This is why it is crucial to always use a jaw spreader and pliers when handling a musky. It’s really not worth taking the risk.

Are muskies dangerous to swimmers? Generally no, but the occasional attack on a swimmer by a musky does occur. It can however be considered very rare and if and when it happens, it’s usually because the musky either felt distressed or that its territory was under threat.

So, there is a slight risk that you encounter an angry musky while swimming, but it is a very small one.

Do You Need a Wire Trace for Perch?
← Previous
Perch Fishing at Night (Best Baits And Methods)
Next →
Click here to cancel reply.