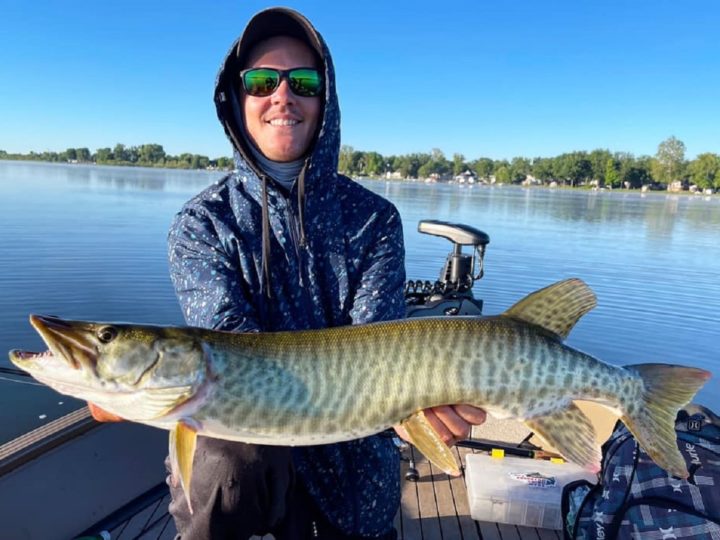 Fishing in clear water can certainly be intimidating, and many anglers think that catching fish in such conditions is a real challenge. But with the right lures, colors, and techniques, hooking up to clear water muskie is often not that difficult.

Keep reading this article and get valuable tips to improve your musky fishing in clear water.

DISCLAIMER: The lure tips and secrets revealed in this article were provided by Strike and Catch’s own musky expert Andre Charron.

How to Catch Muskie in Clear Water?

Muskie are top predators with a highly developed sense of vision, which they take advantage of when hunting prey.

Especially in high visibility habitats, musky can spot a baitfish from far away, and as they are ultra-fast swimmers, they will chase down their meal relentlessly until they can grab and devour it.

That’s two factors you’ll have to consider when it comes to clear water musky fishing: the fish’s eyesight and speed!

Whether you’re casting or trolling your lure, a high retrieve speed should always be on your mind for two main reasons:

Larger muskies especially can be super finicky and suspicious in clear water conditions. I mean, they have become that big for a reason, right?

These are very smart and highly evolved fish, and catching them under these circumstances is not always that easy. Hence their somewhat intimidating nickname: “the fish of 10.000 casts.” Again, not without reason!

To, nonetheless, target them successfully, you’ll have to outsmart them!

If bright daylight helps the fish to see better underwater, fish during the early mornings and late evenings when light conditions are low.

You can also use clouds and the wind to your advantage, as they’ll decrease the light intensity and break the water surface, giving you a stealth advantage above the surface.

Target deeper water and fish your lures as close to the bottom as you dare, especially if there are deepwater weed beds to be found. That’s where the clear water musky girls usually hang out!

And finally, use lure colors that match the hatch and do not stick out too much from the musky’s natural forage!

Speaking of which, let’s take a closer look at some of the best clearwater lures for big muskies!

What Are the Best Lures for Muskie Fishing in Clear Water?

Any lure that you can reel in fast and that’ll make natural movements on its way in is a good choice for clearwater musky!

I can’t stress enough how important the speed factor is! Reel those lures in as fast as you can, and don’t hold back! The fish won’t mind a bit, and a speedy retrieve can make all the difference in high visibility conditions!

PRO TIP: When fishing from a boat, ALWAYS figure-8 your lure. If there’s a hesitant fish following the lure, that method will most likely bring it home! Never underestimate the power of the figure-8!

Make sure to bring the following lures when targeting musky in clear water:

Jerk baits like the famous Musky Dawg are great clear water lures for big musky. They can be fished both as a jerk bait, jig, or crankbait, making them extremely versatile and effective for different water depths.

The Dawg’s long, wiggling tail especially is a real killer for muskies, as they can’t seem to resist the frantic movement it makes during a high-speed retrieve.

This lure has also got a very natural and life-like design, mimicking the musky’s prey, which is another huge advantage when targeting clear water predators. Take a closer look at the Musky Dawg and check out all of its features on Amazon here.

The Cowgirl’s impressive action and immense flash make it the perfect bait for deeper water columns, as it’s well visible and has a very natural movement and look to it.

If your arms are up for it, you can fast retrieve this lure and expect awesome results.

Otherwise, it can work wonders being trolled as well. Just remember to keep the speed up! Check out the amazing Musky Double Cowgirl on Amazon here.

If trolling is your game, using medium to deep-running crankbaits is your best bet for clearwater muskies!

The Jointed Believer is a smart hybrid lure that is the perfect combination of crankbait and softbait, as it has a long soft-plastic, live-action tail attached to it.

This makes for a tremendous trolling lure for suspended muskies that lurk near the bottom, structures, or weed beds during the day when the sunlight is intense and visibility is very high.

It has an amazing wide-wobble action, and together with its wiggling tail, no musky will be able to resist this lure when it passes by. Find out more details about the Musky Mania Super Jointed Believer on Amazon right here.

What Are the Best Lure Colors for Musky in Clear Water?

I wanted to know what lures colors other anglers prefer when targeting clearwater muskies, so I posted a poll in a big musky community, asking 100 anglers for their color preferences. Here is the result:

I wanted to know what lures colors other anglers prefer when targeting clearwater muskies, so I posted a poll in a big musky community, asking 100 anglers for their color preferences. Here is the result:

The most popular choices were natural, stealthy colors that match the hatch of the muskies’ forage in most waters.

Black, white (or silver), and gold are all colors of fish that are on the musky’s menu, including:

PRO TIP: Check out the related web story on musky fishing in clear water for a quick visual summary of this article!

Once again, as the musky can see everything perfectly in the clear water, you’ll have to use lures that look like real baitfish.

If you do that, the chances of getting bites are likely to increase significantly!

It might sound like a small detail, but it can make all the difference when the fish are finicky and just don’t seem to want to go for your bait!

RELATED ARTICLE: How to Catch Musky in Muddy Water?

Musky can spot a thick and visible fishing line underwater as much as they can see your lure. But that doesn’t mean that you shouldn’t use a leader. It just means that you’ll have to use one that is suitable for high visibility conditions.

If you don’t use a leader, bite-offs are practically guaranteed, as muskies have incredibly sharp teeth and plenty of them.

So, either choose a stealthy wire leader or a very thick fluorocarbon leader.

I’d say that most anglers prefer the latter. And you do not have to worry about the thickness, as fluorocarbon lines are more or less invisible underwater, no matter the pound test!

You can read up on the suitable wire and fluorocarbon leaders for musky fishing by checking out this article!

Do Musky Bite at Night?

If fishing for clearwater musky in broad daylight doesn’t yield any results, you should most certainly try to target them during the dark hours of the day.

Many waters can have excellent night bites when it comes to muskies, and often, night fishing for them can be much more effective than during daytime.

However, it’s not all that easy to fish for such a big and wild predator in the dark, and you should prepare yourself well if you’re new to this type of fishing.

You can check out this related article on night fishing for muskies. It’s got a ton of helpful and valuable tips in it!

Musky Fishing in Muddy Water (Best Lures and Colors)
← Previous
Where are Shimano Reels Made? (Not Where You Think!)
Next →