Penn vs. Shimano (Which Brand Is Better?) 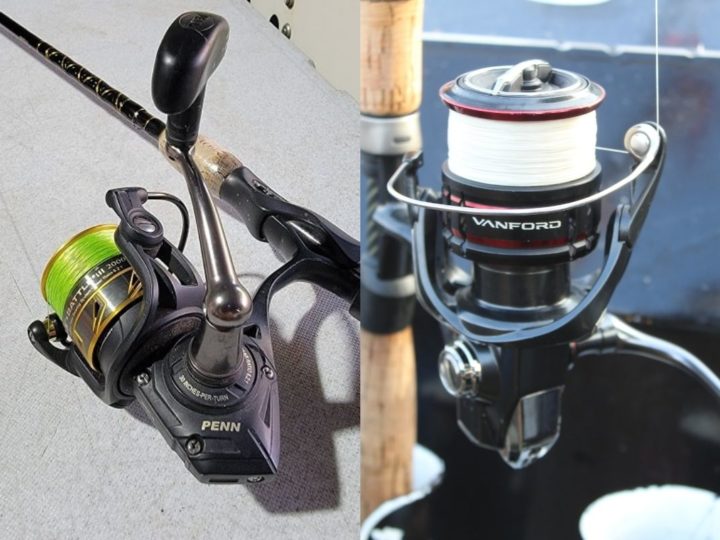 In the world of fishing gear, a handful of brands are mainstays in the industry. Purchasing from them supplies quality and a world-renowned reputation.

Two companies that fall into this category are Penn and Shimano.

Having fished with both of these awesome brands, I wanted to compare them to each other, and I also wanted to know other anglers’ views on the hot-debated topic Penn vs. Shimano fishing reels.

Although both are of great quality and stature in the fishing tackle space, Shimano tends to edge out Penn with the better reels on the market. Their key models have excellent quality, a significant reputation, and millions of satisfied owners worldwide.

But while Shimano is usually the better pick of the two, there is one area of fishing for which Penn reels are generally a better choice. So keep reading this article if you want to find out more!

Penn or Shimano: Which Brand Makes the Better Reels?

For practically all types of freshwater fishing, Shimano tends to be the number one choice for most anglers. On the other hand, many saltwater anglers like to use both Shimano and Penn for their various fishing techniques.

These statements are based on my own experience and the thousands of anglers I have surveyed for this article.

Shimano’s materials are outstanding, the value you get from the purchase is exceptional, their reels are incredibly durable, and most of them have a fantastic design.

I own quite a few Shimano reels myself. Many of them are well over ten years old now and still going strong!

Both of these brands are giants in the fishing industry, but the reputation and quality you find with Shimano really stick out.

Is Penn a bad reel brand, then? Not at all! With Penn and Shimano, we are comparing the cream of the crop here!

Yes, Shimano is the number one choice for many anglers, including myself, but you cannot go wrong with Penn either, especially if you have a somewhat smaller budget! (The price aspect of these two brands will be discussed further down in the article).

So what do other anglers out there prefer? What brand do walleye anglers choose for jigging eyes? What reels do trout anglers use for jigging lakers or spin fishing for steelhead?

And do saltwater anglers prefer Shimano or Penn reels for their off-shore spinning and trolling adventures?

I think asking large communities of anglers for their preferences is a very good way to get an overall idea of what gear works best for certain techniques and species. Those guys have been at it for a long time, after all!

So I went ahead and created some polls in three giant Facebook fishing groups. Here are the results:

What Reel Brand Do Walleye Anglers Use?

Almost all walleye anglers who answered the poll prefer Shimano over Penn when jigging or spin fishing for walleye.

The reason for that is Shimano spinning reels are somewhat smaller than other brands, making them lighter and easier to handle and hold while fishing.

This is especially advantageous when jigging for many hours in a row, as heavier gear might fatigue or arm and hand!

What Reel Brand Do Trout Anglers Use?

The light and compact design is also why trout anglers choose Shimano reels over Penn.

Whether you’re jigging for big lakers from a boat, spin fishing for browns, or float fishing for river steelhead, using a small and lightweight Shimano reel will always give you the best possible fishing experience!

What Reel Brand Do Saltwater Anglers Use?

When it comes to saltwater, however, preferences change! While most freshwater fishermen will prefer Shimano reels over Penn reels, the balance between Shimano and Penn is actually very equal for salties!

It is here that some of the bigger and more robust Penn reels bring out their A-game!

This strengthens the argument that Penn reels are better for heavy saltwater angling.

RELATED ARTICLE: These Are the Best Fishing Reel Brands on the Market

The Vanford is, without a doubt, one of Shimano’s finest creations!

This spinning reel can be used for just about any technique, and the Vanford’s versatility is definitely one of its biggest selling points.

No matter if you’re targeting bass, walleye, perch, crappie, bluegill, or laker trout, the Vanford has got your back!

It’s got incredible features like the X-protect water-resistance technology and a MagnumLite Rotor for the smoothest use possible.

I am the proud owner of a Shimano Vanford myself, and I can tell you that it is one of the smoothest, lightest, and, at the same time, strongest spinning reels I have ever had the pleasure of fishing with!

You can check out the awesome Shimano Vanford on Amazon here

The Stradic is another excellent Shimano reel that sells slightly lower than the Vanford.

Coming in at a mid-end price but having that luxurious Shimano quality, it checks every box.

One awe-inspiring feature of this versatile spinning reel is its SilentDrive. This technology eliminates all noise and vibration coming from the reel and ensures a smooth, quiet retrieval.

The Stradic 3000 is an excellent pick for both freshwater and inshore saltwater fishing with a focus on the bigger predators.

Take a closer look at the Shimano Stradic on Amazon here

What Are the Best Penn Reels on the Market?

The Battle is a very solid and decently priced reel that leads the Penn pack.

The Battle III is the newest version and has high-quality upgrades that make Penn jump up in the spinning reel realms.

It has impressive features like its carbon fiber drag washers, CNC Gear Technology, and the ever-popular Superline Spool.

All of these unique features come together to create an excellent Penn reel that is suitable for freshwater and saltwater jigging and spinning.

Naturally, I also wanted to include one of Penn’s very best saltwater reels. Their Warfare series is the perfect choice for bigger saltwater predators. All you need is a good amount of muscle power, the Warfare will do the rest!

This reel has been made with big and wild fish in mind and using it will give you an entirely new offshore fishing experience.

Every saltwater angler I’ve talked to has spoken highly of this reel and it’s definitely one of Penn’s most popular models.

For such a heavyweight, it’s actually a fairly lightweight piece of gear. It’s also got awesome features such as HT-100 carbon fiber drag washers for a super-smooth drag, instant anti-reverse bearing, and its very own line counter.

All in all, the perfect allrounder for your saltwater fishing trips, and a very affordable one at that!

Penn vs. Daiwa: Which Brand Is Cheaper?

Generally speaking, Penn offers more budget reels than Shimano does, but it is possible to find budget models from both brands.

Penn definitely has the wider spectrum here, though, and some of their lower-tier models are pretty much the cheapest ones I have seen on the market.

And a lower price does not always equal bad quality, which is something to keep in mind when you’re new to this sport!

We all have to start somewhere. I have been there myself, many years ago, a youngster with almost no money at all and a ton of gear dreams.

Looking back, I can tell you that I am glad I didn’t buy the high-end stuff because a) I didn’t know how to operate gear like that anyway, and b) I really didn’t have the budget for it.

I am a fan of natural progression when it comes to fishing gear, and this holds true for beginners of all ages, not just young ones!

As your experience grows, so will your need for more advanced gear. To be honest, you don’t need all that high-end stuff to catch fish!

Sure, it can make things easier and help you fine-tune your fishing, but it won’t automatically make you a better angler. Only you can do that!

So if you’re just starting out, getting yourself a couple of cheaper Penn reels might be the right thing for you!

Here is a list of Shimano’s and Penn’s cheapest reel models for easier comparison. You can check them out more closely on Amazon as well:

Is Shimano Older Than Penn?

Shimano was created as an ironworks company in 1921 and then transitioned to making bike parts.

However, it was not until the 1970s that fishing reels were being rolled out.

Once this happened, Shimano took off as a top fishing brand in Asia and eventually the West.

Otto Henze founded Penn in 1932, which is some odd 9 years later than Shimano. But, on the other hand, Penn was a fishing tackle company right from the beginning.

Instantly, this brand was revolutionizing the fishing industry in the United States by pushing the envelope and disturbing the space.

So, as a founded company, Shimano is, in fact, older than Penn. However, as a fishing tackle manufacturer, Penn is the more senior brand of the two!

What Do Brown Trout Eat? (Interesting Fish Facts)
← Previous
Shimano vs. Abu Garcia (Which Brand Is Better?)
Next →