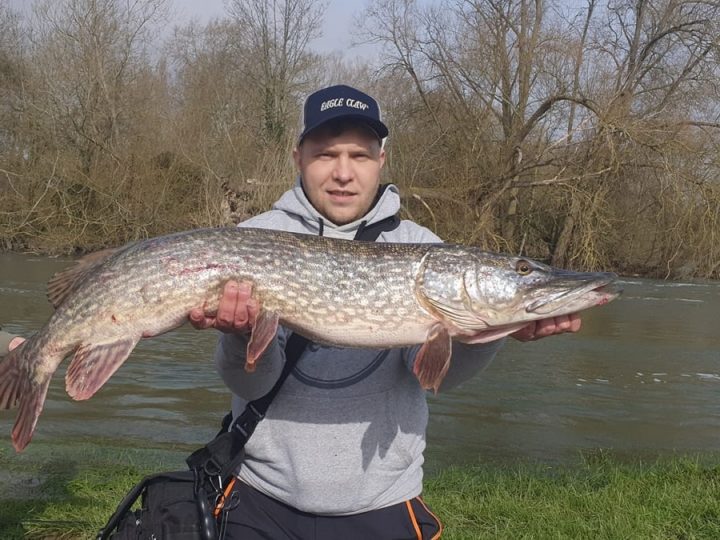 I know plenty of predator anglers who prefer fishing for pike in murky or stained water. I myself have always had a lot of action in such water conditions and have caught some of my biggest northern pike in murky water. The secret lies in choosing the right lure and color!

Topwater lures, crankbaits, and spinnerbaits that make a lot of noise and produce vibrations are your best picks for pike fishing in murky water. The absolute best lure colors for murky water pike are white, green/chartreuse, and orange.

This article is based on my personal experiences over the last 20+ years and on a big survey that involved asking 100 pike anglers for their lure and color preferences. So if you want to know more about the results, just keep reading!

Can You Catch Pike in Murky Water?

Even though pike are visual predators that mostly rely on their eyesight, it is very much possible to catch them in murky water as well.

Northern pike have developed relatively large eyes, which have given the fish both a large line of sight and a highly developed color vision. This is one of the many advantageous biological features that have made the pike an apex predator.

But while they prefer relatively clear water to hunt in, pike can nevertheless hunt and feed in stained or dark water as well.

That’s thanks to yet another of their highly developed features; their lateral line. This amazing sensory organ, that by the way is found on almost all aquatic vertebrates, allows the pike to detect movements, vibrations, and pressure changes in the surrounding water.

A research paper even argues that pike move and hunt more actively in turbid or murky water, as they can’t solely rely on their visual sense to find prey and hence need to patrol their habitat more frequently and actively.

So, as it turns out, murky water pike fishing can be extremely rewarding. All you have to do is base your tactics and lure selection on those two above-mentioned magical words; vibration and movement!

If you combine those with really aggressive and bright lure colors, as they’ll manage to keep some of their visibility even in very low underwater light conditions, no pike will be able to resist!

In extremely murky water with very low visibility, topwater lures can often produce plenty of pike on or just below the surface.

For one thing, the visibility that’s there will be highest near the surface, where the sunlight can at least penetrate a few inches of water.

Additionally, topwater swimbaits or poppers have great movement and action, causing a lot of vibration and surface water disturbance. This will attract any nearby pike, regardless if they can see the lure or not.

I really like whopper poppers with rotating tails, as they will splash around and create even more surface vibration!

Seeing a pike ascending out of the dark water and hitting your lure on the surface is an awesome thing to experience!

Rattling crankbaits are another awesome lure choice for pike in stained water. They both wobble and rattle like mad and will drive any pike crazy!

I think these types of lures make the pike hit them out of pure aggression because the intense rattling must irritate their ear stones, through which their detect vibration in the water, much like the lateral line.

Especially so because they won’t be able to see what’s causing this irritation!

A super-effective pike crankbait for murky water is the Strike King Square Bill. It dives down to 3 to 6 feet, making it the perfect choice for fishing in shallower water ranges.

And thanks to its heavy and bulky body, it’ll make sure that the pike will notice it, especially if you’re going for a whitish or silvery lure color!

You can also throw it really far out, as it comes in sizes 1, 1.5, and even 2.5 ounces, allowing you to cover a lot of water from the boat or shore.

When it comes to big double-bladed spinners for pike, there’s nothing better than heavy artillery Mepp’s spinnerbaits!

This is undoubtedly my favorite pike fishing lure and these types of inline spinners have caught me a ton of big pike over the years!

It simply is the perfect murky water lure, as it combines both large size, flashy colors, vibrations, and a class A underwater action.

The two blades perform extremely well underwater, giving off plenty of vibrations that no pike can pass up!

Additionally, these spinners are quite heavy (1.5 ounces), which makes them perfect for fishing in deeper water.

This also allows you to retrieve the lure extremely slowly and close to the bottom, without sacrificing any spinning action.

What Are the Best Lure Colors for Murky Water Pike Fishing?

Now that you know what types of lures to use, let’s talk a little about the colors you should be choosing. I didn’t merely want to base this section on my personal experience, so I went ahead and conducted an online survey asking 100 northern pike anglers in the US and Canada for their lure color preferences.

Funnily enough, these are the exact colors I myself prefer for my dark water pike fishing, which shows that certain colors really are better for pike fishing than others!

You can go for lures that are fluorescent (bright, vivid colors giving off visible light) or have normal white, green/chartreuse, or orange colors; both have the power to improve your catch rate substantially!

Naturally, these bright colors will be more visible than darker colors in murky water, which is an advantage in itself.

Furthermore, colors like white and the glittering chartreuse can reflect light. And so, if the water is not completely stained, lures of these colors take advantage of the little amount of day- or sunlight that penetrates the water, becoming even more visible.

Why not use the visibility aspect if it’s available as well, right? Because this will further increase your chance of hooking up, that much is for sure.

The fact that 90% of the predator anglers I surveyed confirm this by having chosen white and green/chartreuse as their absolute favorite colors for pike fishing in murky water speaks for itself!

Is Murky Water or Clear Water Better for Pike Fishing?

This is a much-debated question in various forums and Facebook groups that I see all the time and if you ask me, I’d always prefer fishing in dark or murky water when it comes to pike.

As stated above, pike tend to actually move and hunt more actively in stained water, which means that the chance of getting bites is actually quite good in such water conditions.

This theory is also supported by the fact that murkier water with low visibility provides more cover for predators. They don’t have to stay hidden in one place but can instead roam around freely, and basically undetected, in the entire body of water.

Hence, they will move, hunt, and feed with much more confidence.

As a bonus, they won’t spook as easily when you fish for them from a boat, which is something I’ve observed many times in clear water conditions.

RELATED ARTICLE: Of course, some lakes and rivers will always have very clear water and high visibility. If you’re fishing for pike in clear water conditions, make sure to also check out this article I wrote!

Can Pike See at Night?

Just like in stained water conditions, pike heavily rely on their lateral line during the night. So, rather than seeing, they feel their way to the prey.

Regardless of that, northern pike manage to hunt and strike a fish or lure exceptionally well when it’s pitch black.

I do a ton of night fishing for pike and can highly recommend this fun and extremely exciting way of targeting them.

As a matter of fact, I wrote an entire article on the subject of night fishing for pike that you should definitely check out as well!

Atlantic vs. Pacific Salmon (How Are They Different?)
← Previous
Pike Fishing in Clear Water (Best Lures and Colors)
Next →