Pike vs. Pickerel (How to Tell Them Apart?) 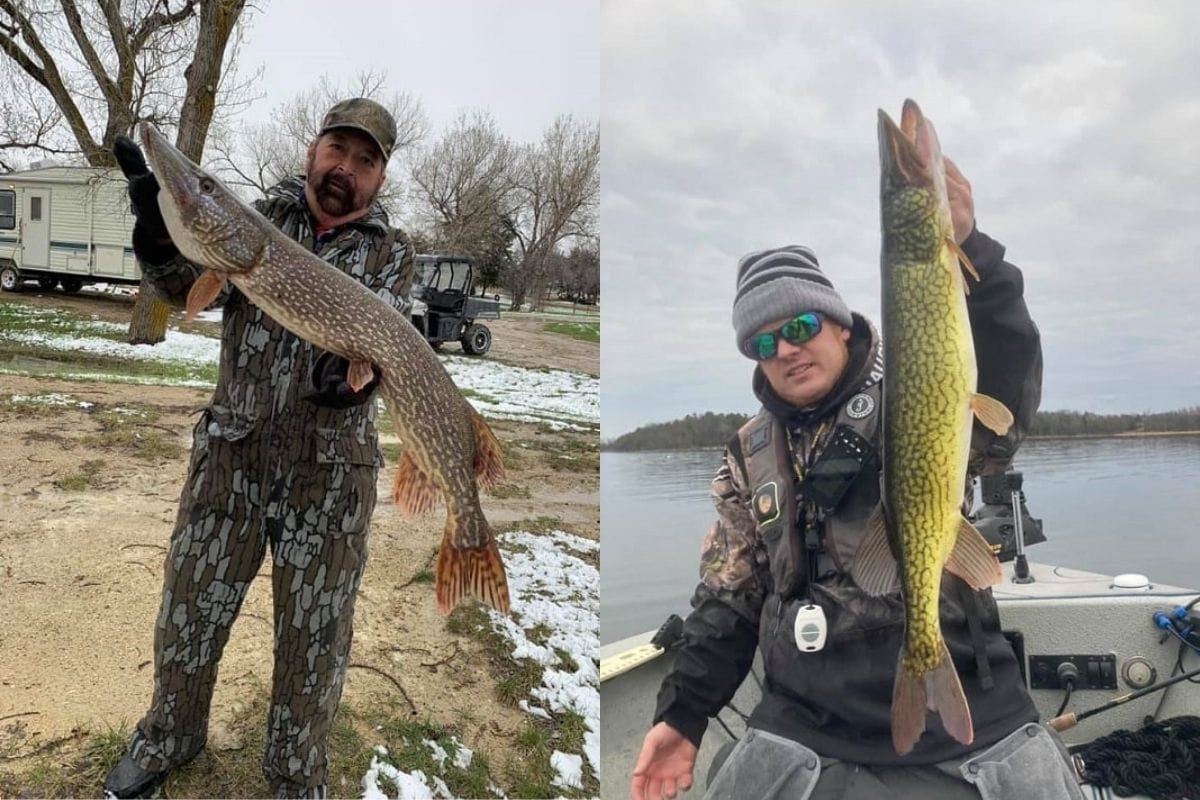 A lot of anglers believe that the pickerel is simply a small pike as they can look rather similar and occur in the same types of waters. What many people don’t know is that these two fish are actually two separate species. So, in order for you to have an easier time telling them apart, I wrote this helpful species guide on the interesting topic of pike vs. pickerel.

Northern pike are much bigger than pickerel. Checking body coloration, as well as dot and bar patterns, are other reliable ways of identifying these two species, as pickerel have a dark chain-like pattern on their sides, while pike have plenty of short, light bar-like dots.

Continue reading this article to find out all the major differences between the northern pike and its smaller cousin the chain pickerel and how you can accurately tell them apart.

What Is the Difference Between Pike and Pickerel?

While northern pike (Esox lucius) and chain pickerel (Esox niger) are actually two separate species, they are nonetheless fairly closely related to one another, as they belong to both the wider pike family Esocidae and the same genus type Esox.

As such, they share certain similarities which can make them relatively hard to tell apart. Especially the pickerel’s body shape strongly reminds of that of the northern pike, which is the reason why many anglers believe they are juvenile pike.

However, as this article will show, there are a number of fairly certain ways to tell the difference between these two pike species. If you keep those in mind while fishing, you won’t have a problem identifying your next pike or pickerel catch.

Body size and weight are, by far, the easiest ways of telling the difference between a pike and a chain pickerel. I think it’s fair to say that the pickerel can be considered the pike’s smaller cousin.

Compared to the mighty apex predator that is the northern pike, the chain pickerel is really somewhat of a dwarf.

Pike will also heavily outweigh pickerel, as their average weight is about 5-10lb and their maximum weight can go up to more than 40lb.

The chain pickerel has an average weight of a mere 2-4lb and can reach a maximum weight of 8-9lb.

RELATED ARTICLE: Check out this in-depth species guide if you want to learn everything there is to know about northern pike

If you are looking closely, you will notice that pike and pickerel will have fairly different body colorations and patterns along their flanks.

Chain pickerel are usually of a lighter greenish to yellowish color, while the body coloration of the northern pike is generally of a much darker green.

The greenish-grey flanks of the pike are covered with light spots or short bars, while those of the pickerel will be covered by a dark, chain-like pattern.

The color and shape of these species’ fins are another way of telling them apart, as they differ quite significantly.

The pike’s fins are very often of a deep reddish or brownish color and are both round and fairly large-sized. The pickerel’s fins, on the other hand, are much smaller in size and often of a paler, washed-out orange or brown.

Additionally, the fins of the northern pike will also be covered by dark spots, which is something that pickerel tend to lack entirely.

This difference is harder to spot and you will have to look very closely in order to see it. The lower half of the northern pike’s gill plate lacks scales, while the gill plate of the chain pickerel will be entirely covered with scales.

Of course, this last feature does not apply to waters that hold both pike and pickerel but is more of a general geographical guideline for the two species.

When it comes to the chain pickerel, its distribution is limited to the Eastern parts of North America. It can be found from the Southern parts of Eastern Canada all the way down to Florida and extends to the West into Texas.

But that’s really it! Any “pickerel” you might catch outside of these regions will in reality be a small pike.

On the contrary, the northern pike can be found in many regions of the North American continent. Its range extends from Alaska through Canada and down to the upper mid-western states of the US.

And so, the two species only coexist in waters found in the northeastern parts of the United States, which is where you’d have to take all the other differences mentioned above into consideration if you wanted, or needed, to tell them apart.

RELATED ARTICLE: How Do You Tell the Fiddference Between a Pike and a Musky?

How to Fish for Northern Pike?

There are many ways to catch northern pike. Most anglers will either catch them with lures or live baits.

You can catch pike with virtually any type of lure, but if you ask me, the most popular ones for this predator include the following:

By far, the one lure that has caught me the most pike throughout the years and that I still use to catch northerners to this day is the Mepps Aglia Dressed Inline Spinner.

Man, there are so many memories here! There is just something about big inline spinners, you know!

They work great in both shallower and deeper water, as well as on rivers, and they catch a ton of pike all year round! You can take a look at some of my favorite colors on Amazon here.

When it comes to live baits for pike, many anglers prefer fish such as:

All of these can be presented on either a slip bobber rig, a bottom rig, or, if you are ice fishing for pike, on a tip-up in combination with a quick strike rig. Live baits are a very effective way of catching northern pike that’s hard to beat!

Just make sure you are using a wire leader, or alternatively, a really thick fluorocarbon leader to prevent those nasty bite-offs! You can check out my go-to fluorocarbon material for pike on Amazon here.

How Do You Catch Chain Pickerel?

Much like its bigger cousin, the chain pickerel likes both lures and live baits, which is what you should be fishing with if you target them.

Generally, you can use the same types of lures that work for pike when fishing for pickerel, as long as they aren’t too big, that is!

Some of the most popular lures for pickerel include the following:

Pickerel seem to have a thing for thin minnow lures, which can work wonders on many waters!

This can be explained by the fact that minnows are one of the most preyed upon fish by pickerel, so they’re definitely used to this kind of baitfish. Check out some really effective minnow lures for pickerel on Amazon here.

Naturally then, you should also fish with minnows if live baits are your preferred choice for pickerel. If you have access to a boat, try slow trolling for them with a slip bobber rig and a live minnow.

It’s a deadly method for this predator! Amazon offers slip bobbers that are perfect for slow trolling with live minnows.

The American record northern pike is a giant fish of 46lb and 52.5′‘ that was caught back in 1940 in the Great Sacandaga Lake (NY) by angler Peter Dubuc.

The northern pike that holds the current world record is an even bigger fish that weighed an unbelievable 55lb 1oz. This monster pike was caught in 1986 by German angler Lothar Louis in Lake Grefeern (Germany).

PRO TIP: Check out the visual summary of this article in the related pike vs. pickerel web story!

What Is the Largest Pickerel Ever Caught?

As the pickerel can only be found in Northern America, all international records have been caught in the US.

The heaviest chain pickerel that has ever been caught was a fish of 9lb 6oz. It was caught by Baxley McQuaig, Jr. in a lake near Homerville, Georgia.

The longest pickerel ever caught was a fish that measured 25.6 inches. It was a recent catch made by angler Burnie Haney who caught the fish in Lake Ontario, New York.

What Is the Difference Between Roach and Rudd?
← Previous
Walleye vs. Sauger (How Are They Different?)
Next →
Click here to cancel reply.