Rainbow Trout vs. Steelhead (What Is the Difference?) 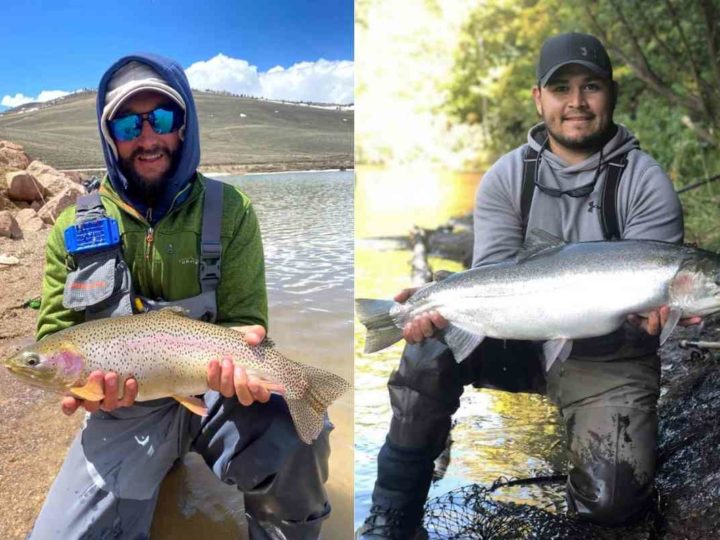 Rainbow trout and steelhead are two extremely popular game and food fish. But are they actually two different species of fish? As I target both of these trout types myself, I wanted to find out more about the interesting topic of rainbow trout vs. steelhead.

Steelhead and rainbow trout are the same species of fish but live a much different life after hatching. A rainbow trout will stay in freshwater streams while a steelhead will leave freshwater and spend a portion of its life in saltwater until returning to its freshwater spawning grounds to breed.

Find out more everything about rainbows and steelhead, including how to tell them apart, why they are called steelhead, and which one of them is the better food fish.

PRO TIP: If you want to read up on all of North America’s trout and salmon types, you should check out this detailed species guide I found on Amazon. It’s really interesting and has a ton of facts.

How Can You Tell a Rainbow Trout from a Steelhead?

Rainbow trout and steelhead are one and the same fish species (Oncorhynchus mykiss). A steelhead is simply a rainbow trout that has left its freshwater habitat and is dwelling in saltwater environments.

Apart from that obvious difference of habitat, it’s not always all that easy to tell if what you see, or what you’ve caught is a true rainbow or a steelhead.

Luckily, there are a few differences and features that can help you identify your trout. Let’s check them out!

As fingerlings, these two fish are completely identical. But as their diet and habitat change, so do their colors.

Rainbow trout will typically have a blue-green or olive-green hue with dark backs and bright, silvery bellies. They will have a pink stripe from tail to head and black spots on the upper part of their bodies and on their tails.

In river systems with dark or murky water, they will instead take on a brownish color.

Steelhead, on the other hand, often have a lighter silvery or chrome-colored body that is much more torpedo-shaped than that of the somewhat deeper-bodied rainbow trout.

In most cases, the pink stripe will still be visible on its sides and gill plates, but won’t be as bright and intense as on rainbow trouts. They also keep the black spots on their backs.

It is the steelhead’s saltwater environment that will change the fish’s body coloration. When returning to their freshwater origins, steelheads will usually keep their silvery color for a while before once again turning darker.

FOOD FOR THOUGHT: When returning to freshwater and changing back to a darker color, should steelhead still be called steelhead, or should they be called rainbow trout again?

The average size of a rainbow trout is 12 to 16 inches, while their average weight is between 1 and 3lb.

Steelheads usually reach a much bigger average size than rainbows do. Their average length ranges between 20 and 25 inches, while their average weight is between 4 and 8lb.

The abundance of food in saltwater is one theory as to why the average steelhead grows so much bigger than rainbows do.

Both common rainbows and steelheads can, however, reach roughly the same maximum size, which would be around 45 inches in length and around 50lb in weight, though such enormous sizes seem to be extremely rare.

You can find rainbow trout in most parts of the northern hemisphere. While being native to the coldwater tributaries of the Asian and North American Pacific Ocean, they have also been introduced to many inland streams, rivers, creeks, and coldwater lakes in both North America and Europe.

DID YOU KNOW: Rainbow trout were first introduced into the Great Lakes in 1895.

Here, rainbow trout either spawn directly in the river systems they live in or (or their respective tributary streams) or, if they live in lakes, migrate to the tributary streams of those lakes and spawn there. Hence, these inland rainbows are either fluvial (found in a river) or adfluvial (towards the flowing water).

Steelhead, on the other hand, are anadromous fish, meaning that they will leave their natal freshwater rivers to live a life very similar to that of salmon, milling around cooler waters in the northern hemispheric oceans until their spawning time comes around and they’ll return to the freshwater rivers they were born in.

Steelheads usually stay a couple of years in saltwater environments before returning to their freshwater spawning grounds.

DID YOU KNOW: Even though rainbows and steelheads can be of a prodigious size, they can manage to migrate up, and spawn in, river stretches that are as shallow as 6 inches.

During certain times of the year, as well as certain stages during their lifecycles, these two fish’s feeding habits overlap.

That’s because rainbow trout are opportunistic feeders that will often feed on what’s available rather than targeting a specific food source.

Both rainbow and steelhead trout will eat anything from aquatic insects and crustaceans to smaller fish and vertebrates (e.g. mice). They are also known to feed on other fish species’ eggs and fry.

Of course, the diet of the steelhead will be much more varied as it enters saltwater territory. Here, it can feed on a variety of smaller fish (including other trout species), mollusks, shrimps, and crabs. Juveline steelhead will also feed on zooplankton.

RELATED ARTICLE: Make sure to read this article to learn the difference between steelhead and salmon

Why Are Rainbow Trout Called Steelhead?

The name steelhead refers to the rainbow trout’s silvery, metallic body coloration once it dwells in saltwater environments.

Personally, I’d find a name like “steelbody” or “steel trout” much more apt, as it’s not only their heads that turn silver and steel-like but their entire body.

FUN FACT: Even though all of Great Lakes’ steelhead are landlocked, meaning that they can never reach the ocean, most anglers will still refer to them as steelhead, instead of rainbow trout.

Do Steelhead Die After Spawning?

Unlike the anadromous Pacific salmon species, steelhead trout do not die after they have spawned in freshwater. Instead, they recover and return to the ocean.

Steelheads can return to and migrate up their natal rivers several times in order to spawn.

And even though they will burn through a lot of their energy reserves, they usually bounce back and regain their full strength and body weight once they’re back in the ocean.

RELATED ARTICLE: Read this article and find out if and why salmon die after spawning.

How to Fish for Rainbow Trout?

The two most common ways to catch rainbow trout are fly and lure fishing.

The former of the two tends to be the most popular. To catch rainbows on the fly, it can be a good idea to always try to match the hatch.

Most fly fishermen will take a small net to strain the water and see what kind of insects the fish could potentially be feeding on.

Once you have pinpointed their potential food source, tie on a fly that closely represents that very food source and cast it upstream, so it can follow the river’s current downstream.

You can use dry flies to possibly entice a rainbow to rise and take the fly from the surface of the water. This is the most sought-after for fly fishermen since you can visually watch the fish take your fly.

Alternatively, you can use streamers, which are a type of submerged fly that is fished below the surface, if the fish won’t feed on the surface or are easily spooked (e.g. in very clear water).

PRO TIP: Check out some classic trout dry flies and streamers on Amazon here. They can help you catch those elusive trout on most rivers!

The simpler method would be to use smaller lures with a conventional spinning rod&reel setup. Of course, you’d need to fish a river that isn’t too shallow or too overgrown with underwater vegetation for this method to work.

Try to cast near big stones in the water, overhanging trees or bushes, as these are classic hiding spots for trout. Another great tip is to target river bends and pools. As these are generally deeper, they are the most suited for spin fishing trout.

PRO TIP: Amazon’s got some awesome crankbaits that can catch you a ton of rainbow trout.

How to Fish for Steelhead?

When targeting freshwater steelhead, both fly fishing and lure fishing are very effective ways of catching them, just like rainbows.

When it comes to lures, bigger spoons, as well as smaller, brightly-colored jigs have proven to be especially effective for big steelhead.

PRO TIP: Check out a couple of really awesome and irresistible steelhead jigs on Amazon here!

Another hot tip is using smaller live baits on a bobber rig. This is a super-effective method that is kind of underrated among trout anglers and one that works especially well for the deeper areas of a river.

RELATED ARTICLE: Make sure to also check out this helpful article if you want to know how to easily and effectively rig a slip bobber.

What Is the Biggest Rainbow Trout Ever Caught?

The current world record rainbow trout is a gigantic fish of 48lb and was caught by angler Sean Konrad in Lake Diefenbaker back in 2009.

How Big Is the Biggest Steelhead Ever Caught?

As steelhead trout isn’t a species in itself, there is no officially recorded world record for it. However, there is a report of giant steelhead that was caught while trolling on the Quinault River (Washington, USA).

That fish had a length of 46 inches and a weight of around 35lb, which is definitely the biggest steelhead I’ve hitherto read about on the internet.

Have there been caught bigger ones? Very likely, but until there’s an official world record for steelhead, we just won’t know for sure.

Chefs often describe the flavor of the rainbow’s flaky but firm meat as slightly nut-like.

Rainbow trout is superb table fare and is a delicacy in many parts of the world. The meat of this trout type can be white or pink, and sometimes even orange. Due to its mild but delicate flavor, there are many ways to cook this fish.

I just love baked rainbow trout, it’s an incredibly good dish! Bake it with lemon, pepper, and garlic, add some asparagus and fresh garlic bread and enjoy a heavenly meal!

A steelhead’s flavor is much like that of salmon, minus the fat and fishy scent when cooking. Their meat has the same pink to red glossy color that salmon has, along with a firm texture.

Of course, that can be explained by the fact that they can spend several years in saltwater, which changes both the texture of their meat and their overall flavor.

As with rainbow trout, the mild flavor of the fish allows for one to create any type of flavor profile they desire.