Shimano vs. Abu Garcia (Which Brand Is Better?) 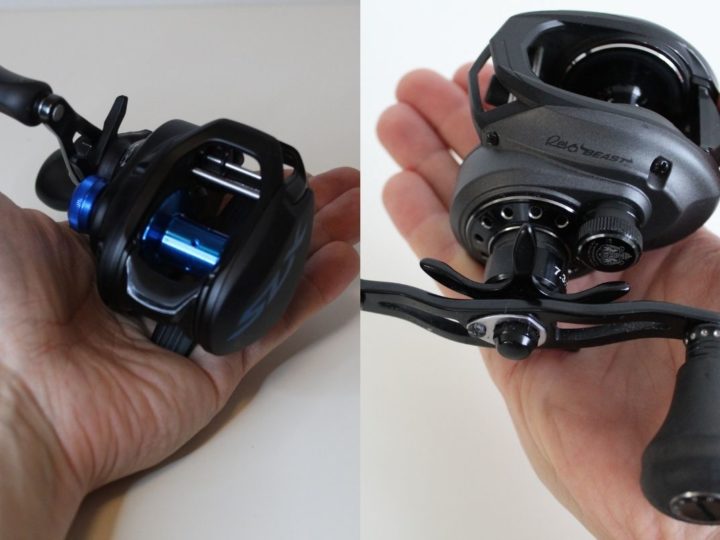 Shimano and Abu Garcia are two of the best reel manufacturers out there, and millions of anglers use their high-quality reels to target various species.

With two such excellent brands, is it even possible to state which one of them has the better reels in its arsenal?

While both Shimano and Abu Garcia are trendy gear choices for anglers, most consider Shimano the better reel brand. Many of their reel series are smaller and more lightweight and offer more value for the price than most Abu Garcia reel models.

Keep reading and find out what brand different predator anglers prefer for their fishing and read up on some of the best Shimano and Abu Garcia fishing reels.

PRO TIP: Just want to see the very best Shimano and Abu have to offer? No problem! You can find the Shimano SLX Baitcaster and the Abu Garcia Revo Beast Baitcaster on Amazon here.

These high-quality reels are very cost-effective, durable, and will get the job done every time!

Abu Garcia or Shimano: Which Brand Makes the Better Reels?

Even though this is a really subjective debate, most anglers will tell you that they prefer Shimano over Abu Garcia any day of the week.

Shimano has always been equal to excellent quality, gear innovation, and affordable prices, making them the number one choice for millions of fishermen worldwide.

I own several Shimano reels myself and couldn’t be happier! Some are now well over ten years old and have been fished with extensively. But they are still as good as new and running as smoothly as ever!

When it comes to fishing gear, that’s not always something you can come across, especially if we’re talking reels!

Is Abu Garcia a worse choice of reel then? Not by a long shot! Actually, they make super popular and very qualitative reels themselves!

I think many of us choose Shimano over Abu because most Shimano reels are actually cheaper than their Abu equivalent.

PRO TIP: I am comparing the prices between Shimano’s and Abu’s budget reel models further down in the article, so make sure to keep reading if you want to know more!

Additionally, Shimano reels tend to weigh a little less than Abu reels, making them the superior choice when casting.

Many of their spinning reels also have a somewhat greater line capacity, which is yet another compelling reason to go for a Shimano reel.

But once again, this is a highly subjective matter of discussion! Some will agree, while others disagree, and there really is no one-size-fits-all answer to be had here!

To further strengthen this argument, I went ahead and ran some polls in some of Facebook’s biggest fishing groups.

This is a reliable way of finding out what types of gear large groups of predator anglers prefer for their various techniques and species.

It can also make it easier to decide which reel to buy if you are a beginner and relatively new to fishing.

Let’s take a look at the brand preferences of those predator angling communities:

Two out of three bass guys will choose a Shimano baitcaster, mainly because Shimano’s reels are usually more compact and lightweight, which makes casting and holding your rod and reel all day a much easier task.

What Reel Brand Do Pike and Musky Anglers Prefer?

Many pike and musky hunters also prefer Shimano baitcasters, even though quite a few of them use Abu Garcia reels as well.

Reel series such as the Shimano SLX, the Shimano Tranx, and the Abu Garcia Revo Toro Beast are the top picks for most anglers targeting muskie and northern pike.

For walleye fishing, the result is a very different one! I think this is mostly due to the fact that many walleye anglers use spinning reels, rather than baitcasters, and here, Shimano has absolute superiority!

Shimano’s best baitcaster is undoubtedly their awesome SLX. This low-profile baitcasting reel is perfect for your lighter bass or pike fishing adventures. The bass guys especially love this reel!

It’s amazingly compact and lightweight, has a really cool design, runs exceptionally smooth, and is made of the best materials Shimano has to offer.

The mechanics on the Shimano SLX are insane, and for the price, I don’t think there is a better baitcaster out there!

It’s a solid pick for newbies who have never fished with a baitcaster before. You can’t go wrong with this bit of beauty!

Now, when it comes to spinning reels, Shimano has a whole battery of really great reels, but the Vanford beats them all if you ask me.

This fantastic reel can only be called the creme de la creme of spinning reels!

I actually own a Vanford 1000 myself, and I don’t lie when I tell you that it’s, by far, the smoothest and lightest reel I’ve ever fished with.

You barely notice its weight at all, which gives you a great experience when you go around casting the whole day!

It is this reel that most walleye anglers will pick for their spin fishing, but as it’s a really versatile reel, it’s the perfect pick for crappie, bluegill, lakers, and ice fishing as well.

What Are the Best Abu Garcia Reels?

Abu Garcia is known for some pretty heavy baitcasting artillery, and their Revo Beast series can undoubtedly be called its flagship.

The Revo Beast is a low-profile workhorse that is a great fit for big pike and musky.

For being a low-profile baitcaster, the Revo has incredible power in it, and there is no toothy critter out there that this reel won’t tame!

Last but not least, we have Abu Garcia’s Cardinal. This is probably their most sold spinning reel on the market, and it’s an excellent production, for sure!

I know that quite a few bass anglers, who prefer spinning reels over the more modern baitcasters, use the Cardinal, as it’s got great power to it.

Additionally, it’s a really robust and durable reel that will last you for a very long time.

So if you are looking for a solid second-tier spinning reel, the Cardinal might be worth a closer look!

You can find the Abu Garcia Cardinal on Amazon here

Both Shimano and Abu Garcia actually have quite a few really affordable budget reels in their arsenals, and all of them are of really decent quality.

Abu Garcia has the cheapest budget reel, but Shimano’s lowest-tier reel isn’t much more expensive, which might come as a surprise to you.

Many people think that Shimano gear is super pricy. And while that indeed used to be the case, today, many Shimano reels have become quite affordable while maintaining a respectable level of quality.

Furthermore, I’d like to add that, while Abu wins the prize of the cheapest reel on the market, Shimano’s budget models probably have a little better quality to them!

But if you’re new to fishing, you certainly won’t notice a big difference in quality between the two brands, and I’d argue that both of their budget reels are solid picks for beginners!

Lastly, I compiled their cheapest reel models in the below table so that it’ll be easier for you to compare them.

You can also check out each of the below models on Amazon if you want to check them out more closely.

Penn vs. Shimano (Which Brand Is Better?)
← Previous
Shimano vs. Okuma (What Brand Makes the Better Fishing Reels?)
Next →