Steelhead Fishing in Alaska (Where, When, and How?) 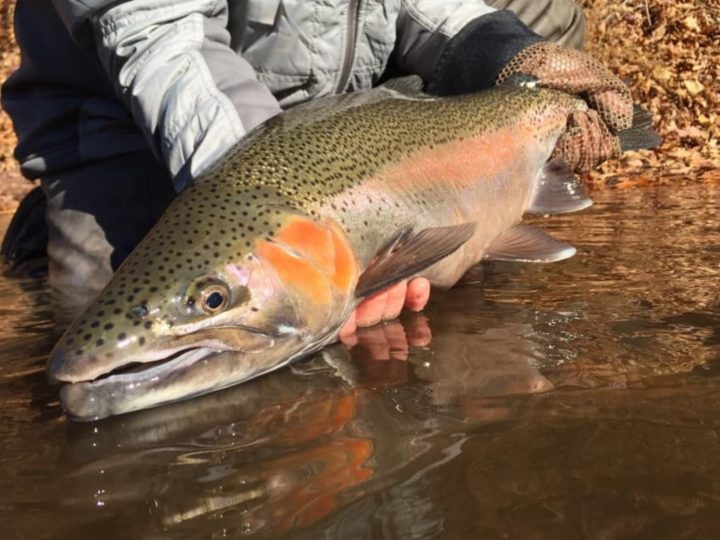 Alaska is primarily known for its incredible landscapes and world-class fishing.

Nearly all corners of this state are full of giant rivers, healthy ecosystems, thriving fish populations, and accommodating guides and charters to help you explore and experience them.

With thousands of miles of clean, undammed rivers, the fisheries here are some of the most pristine in the world.

One of Alaska’s staple fish species is the steelhead (Oncorhynchus irideus). This anadromous version of the rainbow trout grows to trophy sizes along most of Alaska’s coast, stretching from the southwestern corner to the state’s southeastern panhandle.

But as the fish and the rivers to catch them in are so plentiful here, it can be hard to know your way around if you’ve never fished in Alaskan waters.

That’s why I decided to write up this complete guide for steelhead fishing in Alaska. It covers everything from the best steelhead rivers, seasons, and fishing charters, to information about regulations, licenses, and record catches.

So if you are planning on fishing for Alaska steelhead, you should definitely keep reading!

PRO TIP: If you don’t have the time to read the entire article and just want to check out some of Alaska’s most skilled steelhead fishing guides, here is the ultimate list for you:

Where Is the Best Steelhead Fishing in Alaska?

With seemingly unlimited numbers of rivers, creeks, and bays to fish for in The Last Frontier, it’s not all that easy to choose a river for chasing steelhead.

To make things a little easier for you, I researched Alaska’s steelhead destinations and wrote them down in this section.

The following locations include some of Alaska’s most popular and productive steelhead fisheries:

Southcentral Alaska offers plenty of excellent fishing opportunities, and the Kenai Peninsula is probably one of the world’s very best steelhead destinations.

A few hours of driving from Anchorage will land you in a regular steelhead paradise, pre-spawn through post-spawn.

The accessibility and many lodging accommodations make the Kenai Peninsula an excellent option for those on a budget or traveling with family and its many rivers hold plenty of trophy steelies waiting to be caught.

The most famous of them is undoubtedly the Kenai River.

Many anglers would agree that the Kenai River is Alaska’s best steelhead (and salmon) water!

The river’s steelhead, king, and sockeye runs are enormous, which means there’s both plenty and lots of big fish to catch!

In addition to its steelhead runs, the river also holds a respectable population of resident rainbow trout and both variations can reach absolute monster sizes in the Kenai.

Steelhead of more than 20lb are not uncommon and will give you the ultimate fishing experience!

Everything on this island is enormous, the trophy-sized moose, the giant Kodiak brown bear, and, of course, the steelhead!

Opportunities for both fly, spin, and float fishing can be found around nearly any cove.

Additionally to the outstanding steelhead fishing around here, the salmon runs on Kodiak are prime and you’ll probably catch the occasional king, chum, or pink salmon while fishing for steelies.

Although the area has plenty of productive waters, Kodiak’s number one steelhead river is undoubtedly the Kurlak River.

If you’re looking for a remote steelhead fishing location and want to experience Kodiak’s breath-taking wilderness, the Karluk River is your best pick!

Due to its remote location, you won’t have to share the Karluk with the crowds, and as fishing pressure is relatively low here, you can often expect excellent results!

The Karluk has one of Alaska’s biggest steelhead runs during fall and spring, and fish around 30 inches or more are pretty common!

A short plane ride from Anchorage will land you in Kachemak Bay for some incredible steelhead fishing.

If you enjoy the experience of fishing from a boat, Kachemak is your go-to location.

You can expect the steelhead still to be extremely hard-fighting and to have bright chrome colors during the fall and spring months, as they will not yet have entered the river systems.

So if you’re fishing for Kamechak Bay steelhead, be ready for the fight of a lifetime!

Named after the famous Captain Cook, who helped map nearly all of Alaska’s coastlines, Cook Inlet is a great place to fly, spin, or troll for steelhead.

Since these fish are just returning from their feeding grounds out in the sea, you can expect them to be incredibly healthy and well-fed.

Don’t hesitate to step away from the typical spinning reel or fly rod approach and try your hand at trolling.

Not only will this give you a unique experience in a breath-taking environment, but the trolling here can often be very productive and rewarding as well.

Additionally, you can hook up to some really big chinook, coho, and sockeye salmon, which can often be found in great numbers here!

If you’ve never fished Alaska’s world-class steelhead rivers, heading out with a professional guide who will ensure that you will have a productive day on the water and keep you out of harm’s way when dealing with weather and wildlife can be a very good idea.

Here is a list of five of Alaska’s most trusted and popular steelhead fishing charters. Please click on the respective charter’s link if you want to check their descriptions, reviews, rates, and availability.

When Is the Best Time to Fish for Steelhead in Alaska?

Most of Alaska’s creeks and rivers will freeze over in winter, which means you catch steelhead either before or after the ice has taken claim to these waters.

The fall runs usually start right after summer, meaning sometime during August, and last through October or November, depending on how early the cold is arriving in Alaska.

The best time to target fall-run steelies is from October through November in most years. Keep at it until the ice stops you because the fish that are coming up the rivers during this time of year are both powerful and very hungry!

After the harsh winter, when the ice has finally disappeared, the spring-run steelhead will start to make their way upstream.

The spring runs usually stretch from March to early June, and the best fishing for steelhead now would be late March to mid-May

DID YOU KNOW: According to the Alaska Department of Fish and Game, the spring runs in many rivers usually exceed the fall runs. On the other hand, summer-run steelhead tend to be pretty rare and only occur in a few select river systems in the southeastern parts of the state.

How to Fish for Alaska Steelhead?

Fly fishing is the most popular way to catch steelhead in Alaska. Wading a remote river with the silent cast of a fly rod is what most anglers consider the pinnacle of fishing.

Depending on what they are feeding on at the time, you can succeed with both wet flies, dry flies, nymphs, or streamers.

Make sure to bring extra flies and always match the hatch as closely as you possibly can!

PRO TIP: One pattern that always seems to produce fish is the egg fly imitation. Never head out to the river without a few of those in your fly box!

If fly fishing isn’t your thing or the location isn’t suitable for a fly setup, spin fishing for steelies with lures can yield outstanding results!

Spin fishing can lead to plenty of fish in your net, especially during the fall runs, when water temperatures are still a little higher, and the fish are actively feeding.

Depending on the river’s depth and current, you can choose between spoons, smaller crankbaits, or inline spinners.

Another popular and effective technique for Alaska steelhead is float or bobber fishing.

It’s a relatively basic and simple way of fishing, and it is this simplöicity that makes float fishing for steelhead so compelling.

All you need is a basic float, a sinker, a leader, and a single hook.

Put on a bead or egg imitation, let it bounce with the river’s current along the bottom, and wait for that float to go under. There’s no better feeling in the world!

Additionally, the Facebook group Alaska Fishing Reports has plenty of active anglers and guides who will report current reports and catches from a great variety of Alaskan rivers.

Can You Catch Steelhead at Night in Alaska?

Fishing for steelhead at night in Alaska can be highly productive in areas where it is legal to target them during the dark hours of the day.

Your best bet to catching these fish in the moonlight is by either trolling or casting spoons or inline spinners.

It takes some getting used to, but you’d be surprised at how productive night fishing for steelhead can be!

On a clear, calm night, the fishing can be superb on the rivers of Alaska, especially if plenty of moonlight hits the water surface.

If you’ve never tried it out, definitely do so when you get the chance! It will forever change the way you approach targeting steelhead.

Do You Need a Fishing License in Alaska?

Licenses are valid from the date of purchase through December 31st of each calendar year.

For more detailed information on Alaska’s fishing license rules, prices, or if you want to purchase your fishing license directly online, please visit the Alaska Department of Fish and Game’s licenses and permits section.

Following the rules and regulations of all of Alaska’s incredible and unique fisheries should always be your priority number one. Not only does it keep you out of trouble, but it also helps the fishery stay healthy.

Alaska is divided into four regions (northern, southcentral, southwest, and southeast) due to its incredible diversity and size. All of these regions can have separate fishing regulations for their respective waters.

Additionally, subregions may also have different rules and regulations within each of the four main regions.

Always check the Alaska Department of Fish and Game website before you head out to make sure that you are up-to-date with all current regulations of the river you’re fishing.

You can find the current regulations (as well as possible emergency orders and rule changes) for all four regions here.

PRO TIP: Alaska monitors all its fisheries very closely, so don’t be surprised if rules or laws change overnight. Always keep updated. It’s the best and safest thing you can do!

How Big Do Alaska Steelhead Get?

The average Alaska steelhead has a length of 20 to 30 inches and a weight of approximately 8 to 12lb.

Fish between 30 and 40 inches and 15 to 20lb are considered trophy steelies in Alaska.

20lb+ specimens are rare but do get caught pretty much annually, so there’s always a chance of hooking up to a real monster steelhead!

What is the Biggest Alaska Steelhead Ever Caught?

Caught at Bell Island, roughly 50 miles north of the small town of Ketchikan located in southeast Alaska, the largest steelhead ever recorded topped the scale at 42 pounds 3 ounces back in 1970.

Incredibly, this monster fish was caught by 8-year old David White, who was fishing from an inflatable boat.

It was a different time back then, wasn’t it!

While this fish has been the Alaskan record steelhead for over 40 years, there must be even bigger fish swimming around out there!

The question is; who will catch them, and when?

If you want to read up on even more American steelhead fishing destinations, here are a few more state guides that you might find useful: