A Complete Guide to Steelhead Fishing in Oregon 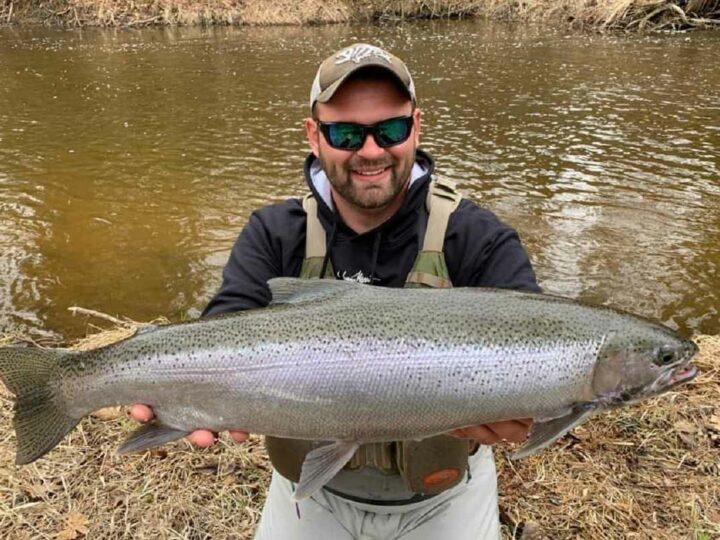 Oregon has got some of the finest steelhead fisheries in the Pacific Northwest!

The state’s many rivers and creeks are famous for their big summer and winter steelhead runs, and some of Oregon’s rivers still hold healthy wild steelhead populations.

With so many fishing opportunities, finding the right information for your next (or first) Oregon steelhead adventure can be a pretty tricky task, which is why I wrote up this complete angler’s guide.

It includes helpful information on the following topics:

Read on and learn everything you need to know about steelhead fishing in Oregon!

Where Is the Best Steelhead Fishing in Oregon?

The Pacific Northwest undoubtedly has the best steelhead fishing in the country, and Oregon is one of the top-rated states for this incredible species.

The numerous rivers and creeks of Oregon offer anglers incredible fishing opportunities, and on quite a few of them, you can target steelhead every day of the year!

There are big winter and summer runs here, which is why Oregon is such a popular steelhead destination.

And, of course, there are plenty of trophy steelies to be caught!

As it would take an entire article to list all of the state’s rivers, I had to narrow things down quite a bit.

So without further ado, here are some of Oregon’s finest steelhead destinations:

Oregon’s and Washington’s Columbia River is undoubtedly one of the best steelhead destinations in the Pacific Northwest.

It is the lower Combia that sees fair amounts of summer-run steelhead.

The early runs can start as early as April, but most fish are in the river from June through September.

These months are also the busiest on the Columbia River when it comes to summer steelies.

PRO TIP: During the summer months, there are also good chances of catching several early chinooks and sockeyes.

The best fishing takes place between Astoria and Bonneville Dam.

Where Is the Columbia River Located?

The Rogue is another of Oregon’s larger river systems that offer excellent steelhead fishing opportunities.

This river, located about 240 miles south of Portland, sees big late summer and winter runs, and anglers who target this beautiful Oregon river can always expect to catch a trophy steelhead!

The primary steelhead season on the Rogue takes place during winter and stretches from November through April.

The summer runs take place from July through October, but the peak of these early runs is most commonly during September and October.

Where Is Rogue River Located?

This next steelhead river in Oregon is a genuine pearl of the Pacific Northwest!

That’s right! This river holds steelhead every month of the year, making it a hugely popular and truly unique fishing destination.

And the best part is that it has a healthy mix of both hatchery and native fish!

While the summer runs usually peak in May and June, the Nestucca River has not one but two winter runs! One early run peaking during October and November, and one late peaking during March and April.

Where Is the Nestucca River Located?

The Chetco is probably one of Oregon’s finest winter steelhead rivers.

The steelhead season here is relatively short (usually stretching from December through March), but anglers can expect plenty of action during these four months!

For one thing, it’s got one of the state’s highest spawning densities of wild steelhead.

For another, the Chetco has a very large and healthy population of hatchery fish.

Additionally, this river produces good amounts of steelhead between 10 and 20lb, which explains why it’s so popular among steelhead fanatics.

It’s especially popular among bank anglers, as it’s got plenty of shore access.

So if you don’t have access to a boat and want to experience one of Oregon’s hottest winter steelhead fisheries, the Chatco should certainly be on your list!

Where Is the Chetco River Located?

This last one on the list of the best steelhead rivers in Oregon is a Columbia River tributary in the greater Portland metropolitan area.

The Sandy River is a classic winter and summer fishing destination for Portland’s salmon and steelhead fishing community.

And as it’s so conveniently located near the big city, plenty of out-of-towners and out-of-staters come here to fish for chrome as well.

These can start as early as May and typically last until August or early September.

There is really nothing better than catching steelhead on a hot summer day, and the Sandy River is a good option for anglers who don’t like to catch fish during the cold months of the year.

Where Is the Sandy River Located?

What Time of Year Is Best for Steelhead Fishing in Oregon?

As you’ve been able to read in the river section above, it is possible to fish for steelhead during most months of the year in Oregon.

With that said, there are peak months and seasons during which the steelhead fishing is at its absolute best.

For summer-run steelhead in most of Oregon’s rivers and creeks, that peak generally takes place sometime in June or July, with good fishing opportunities during May and August and sometimes even in September.

When it comes to winter-run steelhead in Oregon, there are really two peak periods during the year!

The first of the two, which sees the smaller runs, tends to happen in November and December.

The main season for winter steelhead in Oregon stretches from February through March.

That is when most rivers will get their biggest runs!

It is also the time of year during which most steelhead anglers will hit the water, and most fish will be caught.

But as many rivers will hold fish during most of the months of the year, it’s always worth heading out!

There are plenty of good days to be had throughout the year, and if you want to avoid the masses, it can be a very good idea to target the fish during the lesser intense months!

Who knows, you may even have the entire river to yourself and end up catching a fat 20+ pounder!

If it’s your first time fishing on one of Oregon’s hot steelhead destinations, booking a guide who can show you the river and teach you the basics of steelhead fishing can be a very good idea.

You will gain valuable knowledge about the best fishing spots and methods for your target river and enjoy a pleasant and action-filled fishing trip with an expert guide.

That can be one memorable experience you’ll never forget!

Oregon’s got plenty of excellent fishing charters, and if you decide to get yourself a guide, that money will be more than well spent.

Below is a list of knowledgeable and affordable fishing guides for the five rivers included in this article.

They all have outstanding reputations and plenty of good customer reviews, so you can be sure that you’ll get the best quality for your money!

If you are looking for up-to-date information about current steelhead runs in the various rivers and creeks of Oregon, be sure to check out an online fishing report.

The Oregon Department of Fish and Wildlife’s Recreation Report gets updated frequently and includes current fishing reports of many rivers around the state.

OregonFishReports.com is another valuable source for up-to-date fishing reports of many of the state’s steelhead (and salmon) rivers.

The fishing in Oregon is well-regulated, and there is much to read up on and familiarize yourself with before your first fishing adventure in this state.

The ODFW has published a regulations catalog with all the information you need to know regarding fishing in Oregon.

Among other things, this catalog includes valuable information about the following topics:

Please read through these fishing regulations thoroughly so that you don’t get yourself into some kind of trouble and can, instead, enjoy your fishing trip!

Do You Need a License for Steelhead Fishing in Oregon?

All resident and nonresident anglers age 18 and older must carry a valid fishing license on all rivers and creeks in Oregon.

Children under the age of 12 do not need a fishing license.

You can find more information about licenses and fees on the Oregon Department of Fish and Wildlife’s homepage.

You can buy your fishing license online via the ODFW’s electronic licensing system.

Can You Catch Steelhead at Night in Oregon?

Fishing for steelhead during the dark hours of the day can be great fun, but unfortunately, night fishing is illegal in the state of Oregon.

Angling is only permitted during daylight hours.

More specifically, you are allowed to start fishing one hour before sunrise and have to stop one hour after sunset!

How Big Do Steelhead Get in Oregon?

In most river systems, the average Oregon steelhead will have a size of about 4 to 10 pounds and a maximum size of around 20lb.

In some of the bigger rivers, such as the Columbia or the Rogue, the average steelhead size is between 8 and 12lb, while the maximum size can be 30lb or more.

DID YOU KNOW: Interestingly, researchers and hatchery managers in both Oregon and Washington have observed that hatchery-grown fish tend to outgrow their wild relatives, as they often have some physical advantages over the wild populations.

What Is the Biggest Steelhead Ever Caught in Oregon?

The Oregon state record steelhead is a massive fish of 35lb 8oz that was caught on the Columbia River by angler Berdell Todd back in 1970.

A 35-pounder is a giant fish, and with ever-declining wild steelhead populations, breaking this record will take a lot of work!

Luckily, hatchery management efforts have increased over the years, and some stocks are actually on the rise again!

So that new Oregon state record steelie might already be out there somewhere, waiting to be caught.

Are Steelhead Native to Oregon?

Steelhead are native to Oregon and the entire Pacific Northwest.

The coastal areas and their numerous coldwater tributaries of Oregon are home to this anadromous rainbow trout type.

Oregon steelhead have migrated up the state’s rivers and creeks for thousands of years, and just like salmon, they always find their way back to their natal spawning grounds.

Best Salmon River Fishing Reports (For Salmon and Steelhead)
← Previous
What Types of Salmon Are Found in Alaska?
Next →