Steelhead vs. Salmon (How Are They Different?) 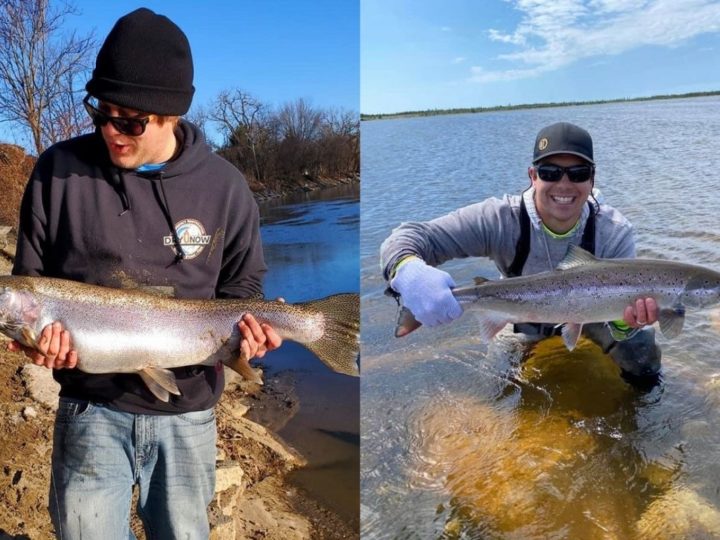 Steelhead and salmon are two utterly different fish species that can look quite alike and often get confused by many people. So, to help you better identify these two fish, I decided to write this helpful guide on the exciting topic of steelhead vs. salmon.

While both species belong to the family of salmonids and can be found in saltwater, steelheads are rainbow trout and hence not a salmon species. The salmon is most commonly the larger of the two species. Steelhead fillets are somewhat cheaper and have a milder flavor to them.

There are many other differences between these two salmonids, ranging from size, appearance, taste, and price. So, if you want to find out more about them, keep reading this article.

PRO TIP: Amazingly, North America is home to more than 70 species and subspecies of trout and salmon. If you want to read up on them, you can check out this extremely detailed and well-illustrated guide on Amazon.

What Is the Difference Between Steelhead and Salmon?

While the Pacific salmon types and the steelhead belong to the same family (Salmonidae) and genus (Oncorhynchus), meaning that they are both salmonids, the steelhead is actually a trout species.

More specifically, steelheads are the sea-run version of the rainbow trout (Oncorhynchus mykiss).

And so, while they are genetically relatively closely related, they are nevertheless two very different species of fish.

But it is that exact genetic relation that explains why many people easily confuse these fish, at least when they are found in saltwater.

It is during the ocean-dwelling period of their lives that they can visually resemble each other fairly closely.

While in the ocean, both steelhead and salmon commonly have a very bright chrome or silvery body coloration coupled with a dark to black back, which, at times, can make it difficult to tell them apart.

To make things even more complicated, they can also have roughly the same torpedo-like body shape.

The one prominent feature that only steelhead possess is the faint red or pink stripes along their flanks.

These stripes, which generally extend onto the fish’s gill plates, are a very obvious marking that they share with actual rainbows, which will help you identify the species.

But be aware that this feature, while being fairly common, is not visible on all steelhead!

Another reasonably safe way of telling them apart is to check their gums and the insides of their mouths.

While all the five Pacific salmon species have dark or black gums, both the steelhead’s gums and the inside of its mouth will be white.

Atlantic salmon can, however, not be included here, as their gums and mouths are also white.

The average length of these two types of fish is another indicator that can help to tell steelhead apart from most salmon types.

But as the sizes of these fish can vary significantly depending on their habitat, it’s not the most accurate of indicators!

Generally speaking, though, the following are the statistical average lengths for salmon and steelhead:

While there are reports of massive steelhead that have weighed 40lb, the vast majority of these fish will only reach a maximum weight of about 20lb.

Most salmon species, on the other hand, can weigh much more than that. Both Atlantic salmon and Pacific king salmon, the two biggest salmon types, can reach prodigious weights of 40 to 60lb. There are even reports of giant salmon that have weighed more than 80lb.

So, if you’re lucky enough to land a massive fish that weighs more than 25 or 30lb, it’s very likely that what you’ve caught is a salmon and not a steelhead.

As both steelhead and salmon belong to the same family of fish and spend a considerable time in saltwater, naturally, there taste of their meat is reasonably similar.

What’s fair to say is that both of these fish can be extremely tasty. Both of them are top-rated table fare and are being served in restaurants all over the globe.

Furthermore, both fish are relatively easy to prepare at home as well and there are plenty of really good recipes for both steelhead and salmon out there.

There are a few specific differences in taste and texture that you may want to know if you’re planning on eating one or the other.

For one thing, steelheads don’t have the intensely fishy flavor of salmon. Instead, they have a much milder trout-like flavor (as they are trout).

Put in other words, it’s the perfect culinary crossing between salmon and trout.

Although wild steelhead often tend to have a somewhat stronger taste than farmed steelhead, which can be good or bad, depending on your taste preferences.

If prepared accordingly, steelhead will virtually melt in your mouth!

Is it Healthier to Eat Salmon or Steelhead?

Steelhead is considered the healthier fish of the two. But again, this will depend on the habitat the fish were caught in, as well as their respective populations’ overall status and well-being.

Obviously, factors such as population, water quality, food abundance, presence of diseases, and whether the fish are wild or farmed will have to be considered when debating this question.

Based on all that, it is suggested that eating both wild or farmed steelhead trout is healthier than eating wild or farmed salmon, as the steelhead’s meat contains more fatty acids and vitamins.

Here’s what you get out of 3 ounces of prepared steelhead trout.

Hence, given that the fish has been caught sustainably, it’s probably tough to find a healthier fish to eat!

Of course, these store prices will vary quite a bit, depending on location, season, demand, and supply.

Other factors that can influence the price of these fish include the quality of the meat, if they have been caught wild or farm-raised, and the actual type of salmon being sold.

Statistically, both king and sockeye salmon are the most expensive types of salmon, while Atlantic and pink salmon are somewhat cheaper.

FUN FACT: The world’s most expensive salmon ever sold was a farm-raised king salmon of 33lb 7oz from New Zealand that was sold to a US foodie via an online auction. The price of this fish was a whopping $1220, which equals a cost per pound of $36 and 40c. I really hope it was worth it!

When Do Salmon Spawn?

Both Pacific and Atlantic salmon will spawn sometime between September and December.

Depending on the water temperature and level of the river, most salmon will migrate upstream already during the summer but either wait until or simply do not reach their spawning grounds before the fall season.

RELATED ARTICLE: Check out this article if you want to learn more about the different salmon types’ spawning periods and how they’re able to find back to their natal spawning grounds.

When Do Steelhead Spawn?

Like true rainbow trout, steelhead most commonly spawn sometime between January and April, depending on the water temperatures of the rivers they migrate up.

Most steelhead trout will enter freshwater already during fall and overwinter in the river. This period is generally the best to fish for freshwater steelhead, as they do quite some feeding while they wait for the spawning season to commence.

Do Salmon Die After Spawning?

All Pacific types of salmon and most of the Atlantic salmon die after spawning in their natal freshwater rivers.

This, among fish, very rare phenomenon is called semelparity, which means that an organism (in this case, the salmon) puts all of its bodily energy into one reproduction attempt at the expense of its own life.

And as their migration upstream (the salmon run) is so challenging and demanding that they simply die of exhaustion once the act of spawning is complete.

RELATED ARTICLE: Read this article if you want to know more about this interesting fact and what happens to the salmon after they have died in the rivers.

Do Steelhead Trout Die After They Have Spawned?

Even though steelhead trout, much like salmon, return from the sea to their natal freshwater river systems to spawn, most fish will survive the spawning.

They then leave the rivers once again to re-enter saltwater territory and often return to freshwater year after year to spawn several times during their lives.

The steelheads that do die are commonly more male than female.

What Is the Biggest Salmon Ever Caught?

The biggest salmon ever recorded was an enormous chinook (king) salmon specimen of an unbelievable 126lb.

However, this fish was caught not with sportfishing gear, but in a fish trap in Petersburg (Alaska) back in 1949.

The biggest rod and reel-caught chinook was a 97lb 4oz fish that an angler managed to land on the Kenai River (also in Alaska) in 1985.

RELATED ARTICLE: If you want to read up on all the salmon types and their respective world records, make sure to also check out this interesting article!

What Is the World Record for Steelhead Trout?

There is no official record, but according to a 1970 story in the Seattle Times, the biggest steelhead ever caught was a giant sea-run fish of 42lb and 43 inches.

While trolling from salmon near Bell Island (Alaska), 8-year-old David White thought he had landed a really nice salmon.

However, the taxidermist who preserved the fish for David and his parents told the family that their sun’s catch had actually been a giant steelhead trout.

Two university fisheries professors also confirmed this, and so to this day, young David holds the world record for steelhead trout. Maybe it’s still mounted in his house somewhere!

Can Salmon and Steelhead Crossbreed?

As both salmon and steelhead (rainbow trout) share the same family and genus of fish, technically, they are able to interbreed and produce offspring.

However, as these fish have somewhat different chromosomes, their offspring would be genetically impaired and sterile.

Additionally, salmon and steelhead aren’t able to mate, as these species have different spawning periods. So, even if they are found in the same river, they will not reproduce simultaneously.

With that said, it’s probably more common than not that the occasional steelhead male joins the party when the salmon are at it while overwintering in a salmon river.

When it comes to interbreeding between salmon and trout in general, it has long been observed that genetically modified farmed Atlantic salmon have managed to crossbreed with brown trout and successfully produced offspring.

Time will tell if this may also become a more common phenomenon between GM Atlantics and steelhead.