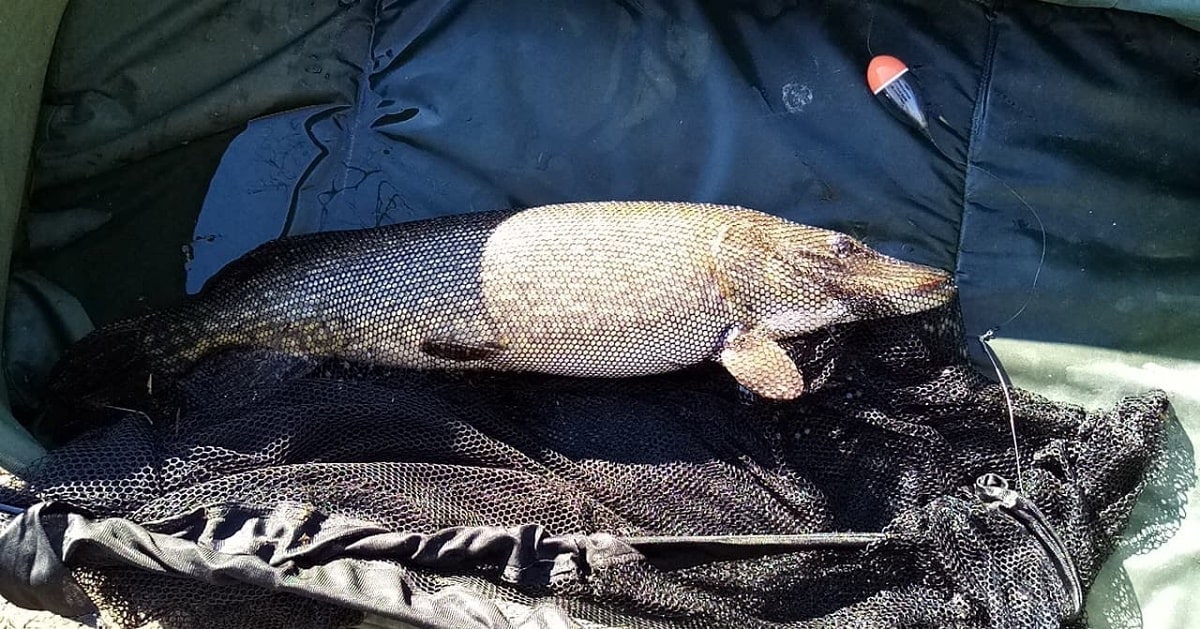 I have successfully used the sunken float rig for my pike fishing for many years. It is a superb rig for both dead and live baits and works at its best when fished in moving water.

Beginners often find this predator rig somewhat difficult and intimidating, but it really is simplicity itself if you know how to set it up and what tackle to use.

In order to show you just how easy it can be to rig the sunken float, I decided to write this illustrative step-by-step guide. It includes both simple explanations, images, and tackle recommendations.

So, if you are interested in learning a new and very effective pike and zander rig, or if you want to improve your sunken float setup, this article is perfect for you!

How Does the Sunken Float Rig Work?

The sunken float rig is a very smart and effective predator rig that uses a submerged float to keep the baitfish just off the bottom.

As you also use a bottom weight in combination with this rig, it is hence considered a bottom rig that however allows you to fish your baits a little further up, which can be really effective for pike especially.

The float doesn’t serve its normal purpose when it comes to the sunken float rig, as it will be submerged and not visible while fishing and hence not act as a bite indicator.

Instead, it merely elevates and holds your baitfish at a specifically set depth just above the bottom.

Below the float, there is an uptrace with a helicopter setup onto which you connect your wire trace.

As the trace can spin around your uptrace, it allows your live bait to swim around freely, and your dead bait to be moved around by running water if you are fishing rivers.

By tightening or slackening your mainline, you can also adjust the depth you want your baitfish to be at.

Tightening the line will lower your bait while slackening it will cause it and your float to move further up.

Using this method can be especially effective when dead baiting, as it will give your dead baitfish some extra movement and attraction.

And as there is no visual bite indication, you would have to use the commonly used indicators for bottom rigs, namely either a drop-off indicator or a bite alarm.

How to Rig the Sunken Float Paternoster?

Before we start rigging, here is a list of the tackle you will need for the sunken float paternoster:

The first thing you have to do is to put a float stop on your mainline in order to prevent the float from sliding too far up the line.

Then, thread your predator float onto your mainline, and finish by putting on yet another float stop. This second stop will simply act as a buffer bead between the float and the swivel.

I recommend using a medium float for smaller baitfish, and a large one for bigger baits. You can find the perfect sunken float on Amazon here.

Always make sure that your float actually manages to elevate your bait when fishing with live baits, as it will otherwise manage to get to the bottom, which will impact your presentation somewhat.

Step number two is putting on your uptrace. But before you can do that, you will have to actually make an uptrace first. Don’t worry, it’s a really simple and swift task!

Done! You now have an open-ended uptrace (we will get to the other end in step 3). Now, you can simply tie your mainline to the uptrace’s swivel, using the improved clinch knot (my favorite fishing knot).

This next part is a really simple hack that erases the need of buying special helicopter swivels for sunken float setups. All You need is two big eye swivels that you then connect to one another. You can find really strong big eye swivels on Amazon here.

What you have to do is simply thread one swivel through the big eye of the second, creating a helicopter setup as one swivel will spin around the other.

And in order for the spinning swivel not to slide up onto your uptrace, you should squeeze its eye together using pliers.

Now, you can put the connected swivels onto the other end of your uptrace, again via the help of a crimp.

Your basic sunken float rig is now finished. Good job! Now, all that remains is the wire trace and the lead.

If you are using soft-strand or multi-strand wire, you can simply tie your wire trace directly to the rotating big eye swivel. Amazon has really top-notch pike wire material that you can find here.

Otherwise, you can connect it using a micro-crimp.

I prefer somewhat shorter traces in order to lower the risk of tangles when casting out. Hence, a length of 10-15 inches is totally enough. And thanks to uptrace, you don’t have to worry about possible bite-offs either.

I also use an anti-tangle sleeve on my traces in order to prevent possible tangles even more and to get a nicer angle from my mainline and uptrace to my wire trace. It will definitely give you a better bait presentation.

When it comes to hook sizes, I prefer #4 trebles for bigger baits and #6 trebles for smaller ones.

Pro Tip: The small fluorescent beads you see on my wire trace are used in deep and dark water conditions, simply to give a little extra colour and attraction to my baits.

The last part of your sunken float rig is the lead line. The length of the monofilament line is determined by the depth you want your baitfish to be presented at. The further off bottom you want it to fish, the longer the lead line has to be.

No matter how short or long it’ll be, just make sure that it’s always longer than your wire trace so that your baitfish will never be able to touch the bottom.

I normally set the length to 20-30 inches, which means that my baitfish will be fished approximately 5-15 inches off the bottom.

Pro Tip: Use a thinner diameter of 6-8lb for your lead-line, as this is the part of your rig that should break if you get snagged on the bottom. You’ll lose your lead, but keep the rest of your rig!

The weight of your let is decided by both the size (and strength of your live bait) and/or the current (if you are fishing rivers).

The bigger and stronger the bait, and/or the stronger the current, the heavier your lead will have to be in order to keep the entire rig in place.

Generally, I will go for a 1.5oz lead for smaller live baits and slower currents, and a 2-2.5oz weight for big baitfish and/or stronger currents. Just observe your line when fishing; if your rig wanders off, you’ll have to weigh it down more.

Pro Tip: Tie a few simple overhand knots into your lead-line, in order to create more weak points in case you get snagged.

And that’s it, you have now successfully rigged a sunken float paternoster!

What Baits Can You Use on the Sunken Float Rig?

The sunken float rig works very well with both live and dead baits. I use both bait variants all the time on this rig and both of them produce a lot of bites.

That said, I usually avoid too big baits, as heavy baits can be really difficult to cast out far, and too large and strong live baits will usually just not stay where they’re supposed to be for long, as they can manage to take off with the entire rig setup.

So, medium-sized baits of 5 to 10 inches are a very good choice for this rig.

Where Can You Fish the Sunken Float Rig?

While you can fish the sunken float paternoster in both still and moving water, the ideal venue would be a slow to medium-flowing river, especially when it comes to dead baits.

The gentle current will move your dead bait and make it appear alive as it floats slowly up and down in the flowing water. It is here that the sunken float is absolutely deadly for pike and zander!

On the other hand, when you are fishing with live baits, it doesn’t really make much of a difference if you are targeting still or moving waters. The baitfish will produce enough movements on its own and hence get the attention of nearby predators.

Best Tench Fishing Reels (for Ledgering and Float Fishing)
← Previous
Bass vs. Catfish (Do They Get Along?)
Next →
Click here to cancel reply.

Time to scrap treble hooks they are cruel and barbaric,use big singles instead .Caught many pike to over 30lb the catch rate never altered. But healthy released fish were the norm.

thanks for reading my article!

That's a good point there! I'll def give single hooks a go as well!

Thanks and tight lines