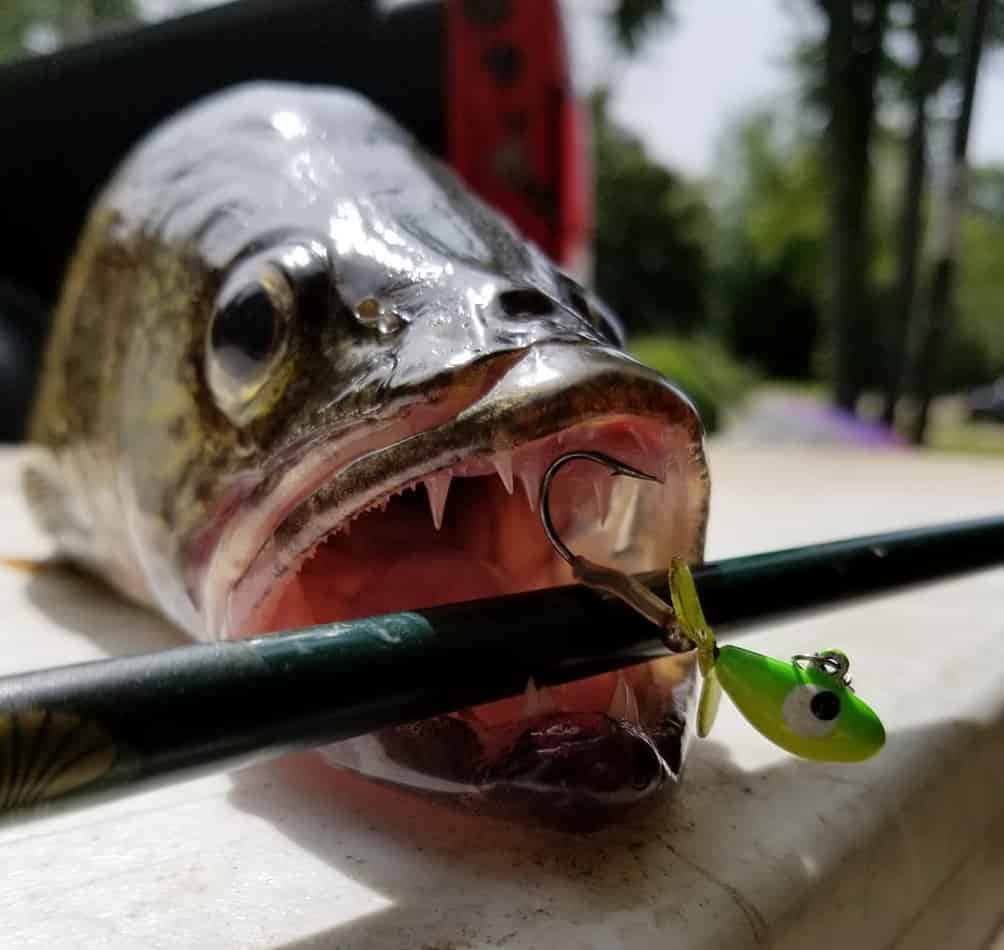 Walleye are fascinating and very popular game fish. As they are predators as well, I have always wondered about their teeth, and so decided to find out more about them.

Walleye have plenty of smaller canine teeth along their upper and lower jawline. In total, a walleye can have between 30 and 40 canines. The biggest of these can reach a length of about half an inch. While being sharp, they are also somewhat blunt, pointy, and spread apart, which means that walleye teeth cannot bite through your fishing line.

Contents show
1 Do Walleye Have Teeth?
2 How Many Teeth Do Walleye Have?
3 How Big Are Walleye Teeth?
4 Can Walleye Bite Through Line?
5 Should You Use a Leader for Walleye?
6 How to Unhook a Walleye
7 Can a Walleye Hurt You?
8 Related Articles

Do Walleye Have Teeth?

As the walleye (Sander vintreus) is a predatory fish, it does have plenty of teeth. These canine-type teeth help the walleye to grab and keep its prey while hunting.

Walleye teeth are more pointy and blunt than sharp. They are also spread apart and do not grow in tight rows or pads, like the teeth of pike or muskie.

It is these teeth that make the walleye look somewhat like a vampire and that often cause two deep cuts in the baitfish when fishing with live or dead bait.

Additionally, walleye have smaller canines that are more numerous and that grow along its upper and lower jawline. Even smaller teeth can be found further down the mouth cavity behind the cheek areas. These can sometimes also grow between the smaller canine teeth.

Already as juveniles, walleye develop their set of teeth which then gradually grows along with them. Thanks to this fact, walleye start to prey on insects and other fish from a very early age, much like the pike and musky.

How Many Teeth Do Walleye Have?

On average, walleye can have between 30 and 40 canine teeth in their mouths. These include both the bigger, more dominant type, as well as the smaller ones along its jawlines.

The number is however relative to the walleye’s size, which means that really big specimens can undoubtedly have even more canines.

It is harder to estimate the number of smaller teeth that grow in between the bigger canines, as it varies immensely from individual to individual.

How Big Are Walleye Teeth?

The walleye’s bigger canine teeth can reach a length of about half an inch or just short of that, which is quite substantial for a fish of that size. Once again, really large, hitherto uncaught specimens could potentially have even bigger teeth!

The smaller canines of the walleye are typically 1/8-1/4 of an inch in length.

It’s smallest, needle-like teeth only grow to about 1/16 of an inch, which is also why they are more numerous than the bigger canine teeth of the walleye.

Can Walleye Bite Through Line?

As walleye teeth are pointy, blunt, and spread apart, they are virtually unable to bite through your fishing line.

This applies to both monofilament, fluorocarbon, and braided mainline.

Of course, as with any fish that has teeth, a certain level of abrasion will occur the more fish you catch with your line, which means that you should always check your line for weak points near your hook or lure if you are not using a leader.

It goes without saying, however, that you have to use the appropriate pound test mainline in order not to risk any line break. Because even if a big walleye won’t bite through your line, its weight and pressure can certainly snap a fishing line that does not have sufficient breaking strength.

Should You Use a Leader for Walleye?

Steel leaders are generally not recommended when fishing for walleye, as they are rather line-shy fish with very good eyesight. On the other hand, thinner fluorocarbon leaders can be a very good idea in clear waters that harbor pike and muskie in order to lower the risk of bite-offs.

Fluorocarbon line has a higher abrasion-resistance than conventional monofilament line while at the same time being almost invisible underwater, which is a huge advantage when it comes to walleye fishing.

If you decide to use a fluorocarbon leader, make sure it has a breaking strength of 10-15 lb. Anything below that will not withstand possible pike and musky bites for long and ultimately result in you losing both lure and fish.

If you want to read up on the best leader suggestions for walleye, make sure to also check out this related article I wrote on the topic: Do You Need a Steel Leader for Walleye?

How to Unhook a Walleye

The best and easiest way to unhook a walleye is to grab it right behind its head where the gill plates end with your one hand while opening its mouth and unhooking it with your other hand, using your pliers.

If possible, try to unhook the fish directly in the net by simply holding its head out of the water, as this will minimize damage to the walleye’s protective skin coating.

This way, you can handle, unhook, and release the fish without it ever having to leave the water.

If you have caught a really big specimen that you want to take a picture of, as well as to measure and weigh, you certainly should! Just make sure you do so hastily and with great care. Fish care should always come first, right!

Pro Tip: If the handling or unhooking of the walleye takes longer than expected, pour a little water over the fish’s head and gills while it’s out of the water in order to make the walleye’s time on land more tolerable.

Can a Walleye Hurt You?

Walleye may be predators and have pointy teeth, but they do not intentionally attack humans. In fact, I have actually never heard a swimmer or angler being attacked by a walleye.

That said, their teeth can certainly injure you if you are unlucky or handle the fish wrongly while unhooking it. Most commonly, anglers scratch their fingers or hands while having them inside a walleye’s mouth trying to get their hook out.

This is why you should always use long-nose pliers when unhooking predators such as walleye, pike, and muskie.

Something that is less talked about when it comes to injuries is the walleye’s pointy and spiny dorsal fin.

Its upper dorsal fin, with its pointy spikes, has probably caused more injuries and flowing blood than any other body part of the walleye!

In conclusion, it is wise to always handle a walleye with great care, no matter if it’s the mouth and teeth, or the fish itself, both for its and your own sake.

link to What Is the Best Leader for Ice Fishing Pike?

In order to be able to safely land your ice pike, you either need a strong fluorocarbon leader of about 50-60lb or a titanium wire leader of about 25-30lb. Both leaders have good abrasion resistance...

The best tactic is either to fish smaller single baits on or just off the bottom, or a zig bait higher up in the water. You should also be fishing during daytime and seek out either the deepest parts...