Walleye vs. Sauger (How Are They Different?) 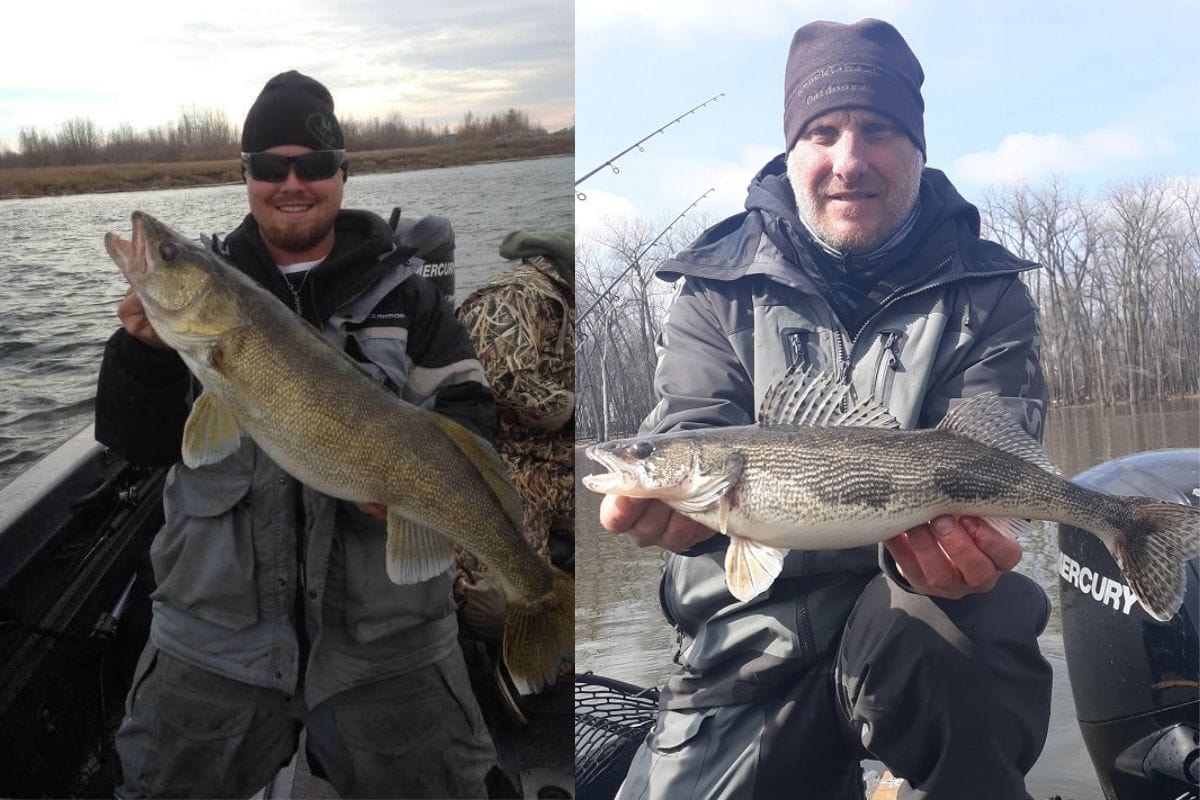 Many anglers wonder about the difference between walleye and sauger, as those two predators tend to look fairly similar. And while they are in fact closely related to each other, it is still possible to accurately tell them apart. In order to help you better identify these species, I put together this helpful article on the interesting topic of walleye vs. sauger.

Most notably, walleye are the bigger of the two species. When it comes to colors, sauger have a dark-golden to brassy body coloration, while walleye are generally more light-golden to olive green in color. Saugers also have big, dark spots on their bodies, which walleye mostly lack.

If you want to find out about all the differences between walleye and sauger, all you have to do is keep reading this article.

How Can You Tell a Walleye from a Sauger?

Both walleye (Sander vitreus) and sauger (Sander canadensis) belong to the same family (Percidae) and genus (Sander) which means that they are very closely related and have hence evolved in much the same ways.

They both share the same types of habitat and can more or less be found in the same regions across the US and Canada. This means that, if you fish for one, in many waters, chances are that you can end up catching the other.

Many anglers frequently catch both walleye and sauger, and many of them can have a hard time identifying their catches.

And while walleye and sauger do in fact look very much alike, there are certain features that one can look for in order to tell them apart.

When it comes to body coloration, it is fairly easy to see the difference between a walleye and a sauger, if you know what each species looks like, that is.

Walleye have dark backs, lighter flanks, and whitish bellies. Often, their backs are crossed by black bars or bands and their flanks will have a light-golden, yellowish, or olive-green color.

Sauger, on the other hand, are of a much darker color. In many waters, the colors of their backs and flanks blend together into a mix of dark grey, brown, and/or black. Only their bellies are of a whitish color.

Additionally, their bodies can be covered by irregularly distributed bigger black spots.

The differences in length and weight can also help you distinguish between walleye and sauger, at least when it comes to bigger fish. This is due to the fact that walleye, which is the superior predator of these two fish species, will grow much larger than sauger.

Logically then, walleye will also weigh much more than sauger. On average, walleye weigh 2 to 4lb, while being able to reach a maximum weight of a little over 20lb.

Sauger only have an average weight of about 1lb and can reach a maximum weight of 8lb.

Pro Tip: Make sure to always have a fishing scale with you if you want to be able to weigh your fish! Not only can it help you identify your catch, but you’ll also know if you’ve caught a new personal best! You can check out my favorite fishing scale on Amazon here.

If you ask me, checking this next feature is the most certain way of telling the two species apart. The difference between the walleye’s and sauger’s two dorsal fins, which are the ones on their backs, is really quite obvious and hard to miss.

While both fish have dorsal fins that are spiny, only those of the sauger are covered with small black spots. The walleye’s dorsal fins, on the other hand, completely lack this feature.

Walleye also have a very unique feature that can help identify them with ease. Their lower tail fin will almost always have a white area on it. Sometimes it’s just a smaller dot, and sometimes it can be the entire lower half of their tail fin that is white.

Regardless of the size, this feature will only be found on walleye and it makes for a great visual identifier.

RELATED ARTICLE: Make sure to also read this article on all the differences between walleye and its European cousin, the zander!

How to Fish for Walleye and Sauger?

As walleye and sauger can be found in many lakes and rivers all over the US and Canada, many anglers frequently catch both species when they are fishing for one or the other.

And as they are so similar in their predatory behavior and food choice, it’s safe to say that the same fishing methods will catch you both species! Or, put in other words, it’s hard to target just one of the two without also ending up catching the other.

Walleye and sauger can be caught with lures and smaller live bait, both in open water and on the ice.

Some of the most popular lure choices for walleye and sauger include:

When it comes to walleye and sauger fishing with live baits, there is a wide range of options to choose between:

All of the above baits can either be fished on a jig or a slip bobber rig.

Pro Tip: If I had to choose a favorite method for live baits, it’d definitely be the slip bobber, as it’s just so versatile; you can fish any depth, you can slow-troll it, and you can use it through the ice. Especially trolling for walleye and sauger with smaller slip bobbers is a highly effective method that you should definitely try out. Amazon has a set of great slip bobbers if you want to grab a few!

Do Walleye and Sauger Crossbreed?

As they both belong to the Percidae family and share a very similar genetic code, walleye and sauger can and do crossbreed in waters that hold both of these fish species.

A study of two large lakes in Saskatchewan (Canada) has shown that crossbreeding between walleye and sauger is fairly common. As a result, these lakes are now home to several generations of walleye-sauger hybrids.

These hybrids are called saugeye, which shows the characteristics of both walleye and sauger and is actually a rather beautiful looking fish.

Saugeye are also quite popular among anglers, due to the fact that they will grow considerably larger than sauger and considerably faster than walleye.

RELATED ARTICLE: Make sure to also read this article if you want to know how you can tell the difference between sauger and saugeye

A big enough walleye will definitely go for a sauger if it is hungry and if the sauger can fit in its mouth. The walleye is one of America’s top freshwater predators, and as such, the list of potential prey fish on its menu is fairly long.

And given the difference in size between these two species, most grown walleye won’t have a problem devouring an average sized sauger for dinner.

This then begs the question if some anglers actually use sauger as bait when fishing for walleye. If and where it isn’t prohibited, it could most certainly make for a very good live bait on the bobber, I believe!

What Is the World Record for Walleye?

While not being the largest predatory fish in North America, the world record walleye is nonetheless a really big fish, even though there is quite some controversy about it.

It was caught in 1960 by angler Mabry Harper on Old Hickory Lake (Tennessee). This fish weighed an unbelievable 25lb and measured 41 inches. Since then, there has been a lot of debating going on and the catch has been questioned several times, which once resulted in the loss of its world record status.

But, as there had been no real evidence that could disprove its weight, it had the record had to be reinstated. And so, to this day, the Old Hickory catch remains the world’s largest walleye ever caught…at least on paper!

RELATED ARTICLE: What Is the Average Size of Walleye?

What Is the Biggest Sauger Ever Caught?

The biggest sauger ever caught was a fish of 8lb 12oz that a man called Mike Fischer managed to hook on Lake Sakakawea (North Dakota) back in 1971.

Sauger that weigh more than 8lb are extremely rare and the question is if this record will ever be broken!?

RELATED ARTICLE: Make sure to also check out this interesting article if you want to know the difference between sauger and saugeye and how to accurately tell them apart.

Do Walleye and Sauger Taste the Same?

As they are so closely related, walleye and sauger taste fairly similar. As all fish of the Percidae family, they have an exquisite taste and very tender meat. This is why many anglers confidently state that these types of fish are the most delicious freshwater fish there are!

Having eaten both walleye, sauger, and zander (which is their European equivalent), I can absolutely second that! Those fish are insanely tasty! Make sure to try out a recipe for pan-fried or grilled walleye, you can thank me later! And don’t forget the lemons!

RELATED ARTICLE: Are There Zander in US Waters?

Pike vs. Pickerel (How to Tell Them Apart?)
← Previous
Euro-Style Carp Fishing Gear (A Complete Guide)
Next →
Click here to cancel reply.