Walleye vs. Zander (Similarities and Differences) 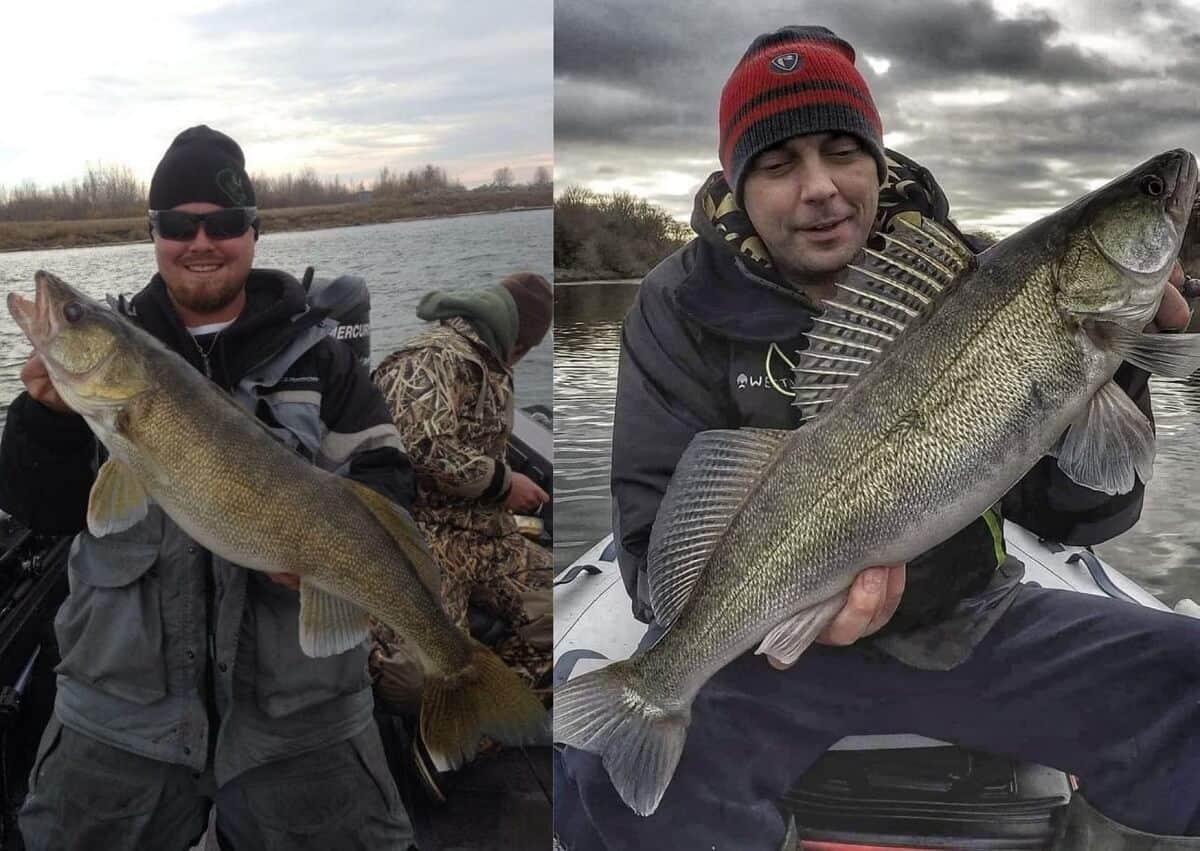 The walleye and the zander couldn’t be further apart from each other, and yet they look very much alike. Having fished for both species, I have always wondered if and how much they are actually related, which is why I wanted to find out more about the topic of walleye vs zander.

Walleye and zander are related to each other, as they both belong to the genus Sander in the family Percidae. Nonetheless, these two fish differ significantly in both length and weight, as well as geographical distribution, as walleyes are found only in North America and zander in Eurasia.

Keep reading this article to learn all about the differences and similarities between these two fish.

Major Similarities Between Walleye and Zander

The Walleye and the zander are genetically very close to one another, as they both belong to the exact same genus (Sander), family (Percidae), order (Perciformes).

As such, they are merely two different sub-species of the Percidae family, namely the Sander lucioperca (zander) and the Sander vitreus (walleye).

Most likely, they used to be one species that got separated during the last post-glacial period, as is the case with other species, such as northern pike or perch.

Did you know? The term lucioperca literally means pikeperch, while the word vitreus means glassy, or transparent.

Both species are very similarly shaped as well, having long, muscular bodies that remind of that of the pike’s (hence the zander’s alternative name “pikeperch”).

The general coloration of walleye and zander is very much alike.

Both fish have dark backs, light flanks, and whitish bellies. They also have several dark or black bands, which are crossing the back.

Did you know? The black bars of the zander and walleye are not always present. Many fish have instead backs that are entirely covered in dark or black tones, making them appear two-toned.

These bands, or bars, remind of those of the perch, even though they are not at all as pronounced, which, of course, is another member of the Percidae family.

Their flanks usually match each other as well. Both zander and walleye tend to have light flanks, which are very often light-green, yellowish, or even golden.

However, not all fish have such beautiful coloration on their sides. Quite a few fish have instead flanks that are poorly colored. Often, such fish will have sides that have a greyish or dark-whitish tone to them.

It all depends on water clarity and light intensity.

RELATED ARTICLE: What Time of Year Is the Walleye Spawn?

Both fish have rather large eyes for their heads that give off a certain eyeshine in darkness. This is due to a light-gathering layer in the eyes called tapetum lucidum.

Not only makes the walleye and zander appear somewhat spooky at night, but it also gives them the ability to see well in both low-light conditions and murky water.

Both fish species have a similar set of teeth, consisting of both larger canines and smaller, needle-like teeth.

Neither walleye nor zander have sharp enough teeth to bite through fishing line. Instead, their teeth are more pointy, which is why many anglers who target them choose to only use fluorocarbon leader material.

Check out this article if you want to check out some really cool walleye teeth images and learn more facts about them: Walleye Teeth (With Lots of Facts and Pictures)

They also share similarly shaped pectoral and pelvic fins, which are somewhat stretched and rounded.

While smaller walleye and zander usually hunt in packs, the larger specimens tend to keep to themselves and roam their waters as lone wolves.

Reportedly, both species prefer smaller-sized baitfish, which they feed on by following and attacking large schools of prey.

Major Differences Between Walleye and Zander

As you will be able to read in this section, the zander is the considerably larger species of the two. If you ask me, this can partly be explained by the fact that the zander only has one major predator to compete with, namely the pike.

The walleye, on the other hand, has to compete with both northern pike, largemouth bass, and musky in many of its waters, which could have resulted in the species’ lesser size.

One major difference between the two species is their average and maximum body length.

While the walleye is the shorter of the two species, with an average length of 10-20” and a maximum length of about 32”, the zander outgrows it by several inches.

Average zander have a length of about 15-30”, while their maximum length is a stunning 42”.

The average weight of zander is between 4 and 8lb, while the species can reach a maximum weight of 30lb.

On the contrary, the walleye has an average weight of somewhere between 1 and 3lb and a maximum weight of 25lb.

Pro Tip: Make sure to always have a scale with you when you’re out, as you’ll want to weigh that trophy fish when you catch it! Check out my go-to digital scale on Amazon here.

The most obvious difference between these two fish species is their geographical distribution, as there is literally an entire ocean between them!

The zander is almost exclusively found in Europe, the UK, and western Eurasia. It is not native to North America and cannot be found in US or Canadian waters, except for Spiritwood Lake in North Dakota, where it was stocked back in 1989.

Walleye can on the contrary only be found in North America and one has yet to hear of an “eye occurrence” in European waters.

RELATED READING: Find out more about the zander in Spiritwood Lake by reading this article!

How Do You Fish for Walleye and Zander

The two species do not only differ in appearance, size, or distribution. Anglers also fish for them in rather different ways.

Many anglers fish for walleye using smaller softbaits, crankbaits, or spinnerbaits. These they either cast or troll, covering various depths.

Fishing for walleye with artificial baits and lures is without a doubt highly popular in the US and Canada.

Other methods include jig-and-minnow combinations or slip bobber rigs with either live minnows, nightcrawlers, or leeches. Amazon has great slip bobbers for walleye that you can check out here.

Want to learn more about slip bobber rigs? Then also check out this helpful article: How to Rig a Slip Bobber (An Illustrative Guide)

When it comes to fishing for zander, preferences are divided between lure and live or dead bait fishing. Both are very popular and widely used ways of catching zander.

When using lures, anglers either use bigger crankbaits that they are trolling, or vertical jigs and soft baits.

A more traditional way of zander fishing is the use of live or dead baitfish, primarily on the bottom.

A float deadbait rig on the deck is a very effective and highly sensitive way of targeting zander, and one that many anglers resort to, in both lakes, rivers, and canal systems.

RELATED ARTICLE: Do not miss this article if you want to know whether or not you actually need a wire leader for walleye.

Can You Ice Fish for Walleye and Zander?

Both walleye and zander are very popular ice fishing species that many anglers target in the Northern parts of the US, in Canada, as well as in Scandinavia, Eastern Europe, and Russia.

While zander are most commonly caught on live baitfish and medium to medium-heavy ice rods, walleye are fished for with either light jigging rods and jigs, spoons, or jigging raps, or dead sticks baited with live minnows or nightcrawlers (the one-two punch). Take a look at Rapala’s awesome jigging raps on Amazon here.

Every year, some of the biggest zander and walleyes get caught while ice fishing, and landing such big specimens on hard water is undoubtedly a very special experience.

So, if you have access to frozen walleye or zander waters, you should definitely give it a try!

RELATED ARTICLE: What Types of Natural Foods and Baits Do Walleye Eat?

What Is the Biggest Zander Ever Caught?

To round off this article, I thought I’d include the world record catches for both species, in order for you to get a better picture of the differences in size.

Currently, the officially claimed IGFA world record zander is a fish of 25lb 4oz and 38” that was caught in lake Lago Maggiore, Switzerland, by angler Jurg Scherrer in 2016.

However, in 2015, an even bigger fish was caught in the Italian river Po. This enormous zander weighed 25lb 6oz and measured 39”. Unfortunately, the angler, Italian Marco Turrini, never claimed that record!

What Is the Biggest Walleye Ever Caught?

There is quite some controversy going on when it comes to the world record walleye catch. Officially, the IGFA world record is a 25lb fish caught on Old Hickory Lake, Tennessee in 1960, by angler Mabry Harper.

However, as this walleye has been questioned a lot over the years, and actually once lost its world record, before being reinstated, due to discrepancies, the unofficial walleye record is a fish that weighed 22lb 11oz and was caught in 1982 by angler Al Nelson on Greer’s Ferry Lake, Arkansas.

The Mighty Atlantic Bluefin Tuna (A Species Guide)
← Previous
What Are The Best Baits for Carp in Winter?
Next →
Click here to cancel reply.

Well nice words, thank you for that. I live near Hamburg and we have a lot huge Zander here, i have seen a lot of 30Inch + ones and also cought a 40Inch+ this summer, there are a lot Zanders bigger than the official ones.

Yeah, it's probably time the world record data was updated!

Hope you found the article useful and interesting!